Boy, nine, loses his eye after being struck with a Nerf gun pellet

A nine-year-old boy has lost his eye after his friend shot a Nerf gun pellet, six years after he was hit in the same eye by a toy arrow.

Taylor-Jay Ravicini was left blind in one eye after he was hit with a toy arrow in a freak accident when he was three.

But it was injured further when he was struck with a foam pellet from a Nerf gun in August this year.

It left the youngster’s eye so damaged that doctors said they had no choice but to remove the organ or he risked losing sight in both eyes.

Now, Taylor-Jay and his mother Stacey, 35, from Swansea, Wales, are fundraising for a prosthetic eye for the youngster.

Taylor-Jay Ravicini, nine, lost his eye after a friend accidentally hit him with a Nerf gun – the same eye that was blinded in a freak accident six years ago

Although he has had a bespoke prosthetic eye fitted, Taylor-Jay is hoping to raise £2,500 for a ‘more realistic’ eye after bullies targeted him with cruel jibes like ‘Popeye.’

‘Wherever we go people are staring at him and whispering about his eye,’ mum-of-three Stacey told Wales Online.

‘In school he is constantly bullied and people call him ‘Popeye’, that really hurts, why should he be treated different?’

She added: ‘I am constantly worrying for him and what will happen next, it has just been one big emotional rollercoaster.

‘I hope people understand how much he needs this prosthetic eye.’

On the GoFundMe page, which has raised almost £700 so far, Taylor-Jay described the freak accidents that led to him losing his eye.

‘When I was 3 years old, I had a freak accident which blinded me in one eye,’ he says. 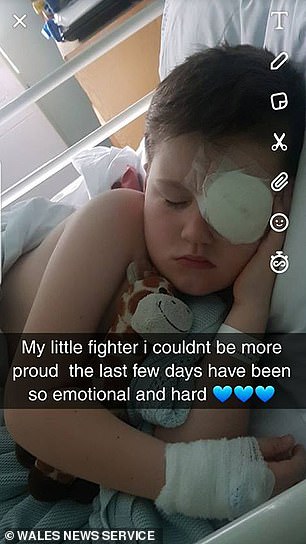 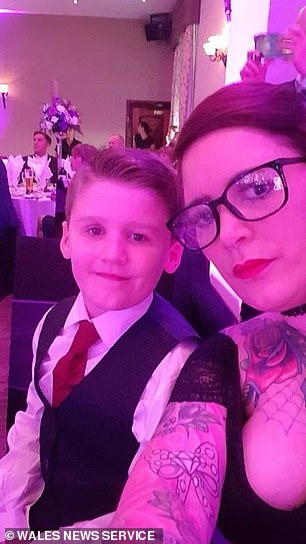 Doctors said they had no choice but to remove the organ or he risked losing sight in both eyes. Pictured left, Taylor-Jay in hospital, and right, with his mother before the latest accident

‘Luckily, I got to keep my eye, even though I couldn’t see out it thanks to the hard work of the NHS.

‘However, 6 years later, I was involved in another accident when me and my friends were playing with our Nerf guns.

‘A stray projectile hit me in the same eye that I was already blinded in, which then filled up with blood and caused a build-up of pressure in my eye.’

He adds: ‘Even though I’m very brave, it was hurting so much that I had to go to the hospital to see if I could get some help.’

Taylor-Jay explained that he and his mum had to decide to have the eye removed after he continued to have problems.

‘We had no time to waste because I faced the horrible threat of completely losing my sight,’ he added.

He said his temporary prosthetic had been a good match but was given a permanent one once the swelling around his eye went down.

‘Unfortunately, it doesn’t look as good as my temporary one and I would like to raise enough money to go and see a private ocular prosthesis specialist so I can get a more realistic eye made for me.’

The £2,500 would cover the cost of eye and the consultant’s fee as well as travel from Swansea to Nottingham and accommodation, the post explained.

‘Any donations, no matter how big or small, will go towards me getting my perfect eye and would change the way I look and feel greatly for the rest of my life,’ he adds.