Sebastian Hibberd, from Plymouth, Devon, was in excruciating agony for the whole weekend before his death. Undated photo supplied by his family

A six-year-old boy died from a ‘treatable’ blocked bowel after 111 call handlers missed a series of signs he was badly ill, an inquest heard today.

Sebastian Hibberd, from Plymouth, Devon, was in excruciating agony for the whole weekend before his death and suffered vomiting and diarrhoea, the coroner was told.

Despite this his father Russell Hibberd said three separate call handlers from the 111 service failed to pick up the seriousness of his condition.

And he said despite repeated calls to his own GP surgery, he was never able to speak to a doctor despite being promised a call back by reception staff.

Battling back the tears, Mr Hibberd told coroner Ian Arrow that Sebastian had always been a very healthy and fit boy who they had no concerns over until they noticed he was unwell on the morning of Saturday, October 10, 2015.

Mr Hibberd said that despite raising escalating fears over his condition worsening throughout the morning of Monday, October 12, he was never able to speak to a clinician and told by 111 on several occasions to speak to his doctor.

An ambulance was only sent after the fourth call to 111 several hours later.

While paramedics were on their way to the family home the call was upgraded from a ‘green two’ to a ‘red one’ as Sebastian became unresponsive.

He was given CPR but declared dead a short while later after arriving at Derriford Hospital.

A post mortem revealed he had died from a blocked bowel. 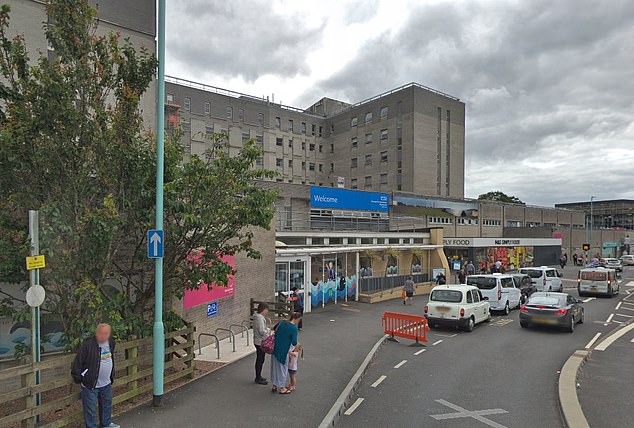 Sebastian was given CPR but declared dead a short while later after arriving at Derriford Hospital. Undated general photo of the hospital

Mr Hibberd said he was in no doubt his son would have survived if he had been given the right treatment earlier.

He told the hearing: ‘There was a huge probability that he would have recovered if he was seen urgently.

‘His death was avoidable and very difficult for me and my family to process. Three of the four 111 call handlers failed to realise the severity or recognise the red flags. Why was I not transferred to a clinical practitioner at any time during the calls?

‘Five occasions I tried to make contact with the surgery during opening hours and was only ever able to speak to a receptionist. There has been no satisfactory explanation.’

Mr Hibberd said he never received a call back from the doctors.

‘I was promised one but one was never received,’ he said.

‘I have serious concerns about the organisational failures responsible for Sebastian’s death and seek assurances this will not happen again.’ 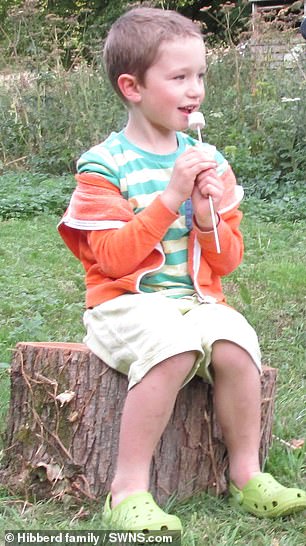 Sebastian’s father, Russell, said medics missed a number of opportunities to save his son. Pictured: An undated photo of Sebastian

Mr Hibberd said they first noticed something wasn’t right on the Saturday morning when Sebastian couldn’t keep anything down.

‘He was vomiting more than once an hour and he spent most of the day watching films in bed with a bucket beside him,’ he said.

Sebastian continued to be unwell throughout the weekend but Mr Hibberd said his condition rapidly deteriorated on Sunday night.

‘Around 6-7am I noticed a change of colour in the vomit and it became dark green. By about 8am he was really unwell and his hands and feet felt cold.’

Mr Hibberd said he then tried to call Glenside Medical Centre in Plymouth, Devon, but heard an automated response telling him to call 111 or 999 if it was a life-threatening situation.

The first 111 call was made at 8.17am and Mr Hibberd said he was told he needed to see his doctor.

‘She should have transferred me to a trained clinician but I was told to call make sure I see the GP within six hours.’

At 8.30am he said he called the surgery again – in total five times with no success.

The father still couldn’t get through and by 8.45am he described Sebastian’s vomit as being ‘green and stringy’ so called 111 for a second time and was told again to see doctor.

‘Again, they should have transferred me to a clinician and an ambulance could have been here within 30 minutes,’ he said.

‘I cannot understand how this happened. It is devastating.’

Mr Hibberd eventually got through to a receptionist who said she would arrange for a doctor to call him back for a telephone triage – but that call never arrived.

‘We were waiting for the doctor to phone but he was getting worse,’ he said. ‘He looked glazed and was sleepy and confused. I called the surgery to say he had got worse but the line had a message to say they had closed for lunch.

‘At 1.30pm I called 111 again and told them his arms and legs were cold and we had already tried to contact the GP. This call was aborted but the call handler then called back and told me to keep him hydrated and give him Calpol.’

The tragic three days leading up to Sebastian’s death, according to his father

Saturday, October 10 – Sebastian’s father, Russell, realises something is wrong as his son can’t keep his food down and is vomiting more than once every hour.

Sunday, October 11 – Sebastian’s condition rapidly deteriorates. By 6-7am, Mr Hibberd notices that his vomit has become dark green. By 8am, his hands and feet feel cold.

Monday, October 12 – Mr Hibberd calls Glenside Medical Centre in Plymouth where an automated response tells him to call 111 or 999 if the situation is life-threatening.

The father calls 111 at 8.17am and is told Sebastian needs to see his GP within six hours. By 8.30am he had called the surgery five times with no success. By 8.45am, Sebastian’s vomit is ‘green and stringly’. His father calls 111 a second time and again told to get him seen by his GP.

Mr Hibberd eventually gets through to the GP receptionist who says a doctor will call back, but they never do. Sebastian’s condition deteriorates further and his father calls the GP only to hear a call saying it was closed for lunch.

At 1.30pm the father calls 111 again and says Sebastian’s arms and legs are cold and he had already tried to contact the GP. The call is aborted but the handler calls back and tells Mr Hibberd to keep his son hydrated and give him Calpol. The surgery still had a message saying it was closed for lunch at 1.30pm.

Mr Hibberd calls 111 again and is taken through the same questions. Sebastian’s vomit is now a coffee colour, which was a change from before. An ambulance is despatched.

The father goes upstairs to find Sebastian unresponsive. He performs CPR using instructions from the 999 operator until the paramedic arrives at 2pm and takes over.

Another ambulance also tries to resuscitate Sebastian  before he is taken to Derriford Hospital. He is taken into the resuscitation area at 3.07pm where efforts to save him continued. CPR was stopped at 3.21pm because continuing would be ‘futile’.

Mr Hibberd said he ‘understood’ the 11 supervisors were concerned about Sebastian’s condition but did not intervene.

‘At 1.30pm the surgery still had a message to say it was closed for lunch,’ he continued. ‘Sebastian had a glazed expression and was not making any sense or registering anything I was saying.

‘I phoned 111 again and was taken through the same questions again. His vomit was now a coffee colour, which was a change and they said an ambulance would be sent.

‘I went back upstairs and there was brown vomit all over his bed and floor. I went to try to get a response.’

Mr Hibberd said he then phoned 999 and started CPR with the phone on loud speaker before held arrived and he went with his son to hospital.

‘I was told they should have picked up on his green vomit. It was not normal. I then had to tell the children that Sebastian had died,’ he said.

‘I spoke to three 111 call handlers and the GP surgery prior to an ambulance being called – none of them told me to call ambulance. ‘

Paramedic Martin Brunt said he was called to the family home just after 2pm on October 12.

Mr Brunt said the incident was redirected by the 111 service and classified as a green 2 response with the patient described as suffering recent abdominal pain and vomiting.

‘On the way the call was updated to a red one when he became unresponsive,’ he said. ‘At the property as we made our way up the stairs we could hear counting.’

The father had started CPR on the young boy with the help of medical staff giving him instructions over a phone’s loudspeaker.

Mr Brunt said: ‘The father had told us he had been unwell for two days with vomiting and abdominal pain.’

Efforts were made to resuscitate him with the help of a second ambulance crew before he was taken to Derriford Hospital by ambulance.

He was met there by Dr Georgia Selby, a consultant paediatrician.

She said Sebastian was brought in to resuscitation area at 3.07pm and confirmed efforts to save him were ‘futile’ and stopped at 3.21pm.

She said a post mortem confirmed the cause of death as bowel intussusception.

The medic added ‘This is rare in this age group and involved part of the bowel into moving into another part which creates a blockage and cuts off the blood supply.’

Dr Selby said that certain symptoms described by the father to the 111 service should have raised the alarm – including dark green vomiting and that the boy appeared confused and had cold hands and feet.

‘They are markers for serious illness in children,’ she added.

Nicola Godefroy, who was on the reception of the Glenside medical practice said Sebastian’s dad called the surgery at 8.50am on the Monday.

She said in a statement: ‘He had phoned 111 that morning.’