Boy, six, is swept out to sea on an inflatable swan

Boy, six, is swept out to sea on an inflatable swan while his horrified dad looks on as scorching temperatures bring hoards of British sunseekers to the coast

The boy’s father called 999 as he watched his six-year-old son being swept out to sea on an inflatable swan.

Builder Sam McKeeder, from Towyn, swam out to rescue the little boy at Black Rock Sands in North Wales.

Sam, who was on the beach with his family when he heard the child’s mother shout for help, found the boy off the swan and face-down in the water when he got to him.

Sam turned the boy over, patted him on the back and the the boy threw up before he started breathing again.

‘He was totally unconscious, I turned him around and patted him on his back and then a lot of water and sick came up, and he started breathing again,’ the granddad, 57, told North Wales Live.

The boy’s father had been told to stay onshore by the coast guard and by the time the boy got to shore there were paramedics waiting for him.

The boy was given oxygen and airlifted to Ysbyty Gwynedd by a coastguard rescue helicopter.

Another man had tried to get to the boy too but as he was reportedly about 200 metres away from shore the man was too exhausted.

A spokesman for Holyhead Coastguard said: ‘I wish people would leave the inflatables at home as they are designed for swimming pool not for the sea.’ 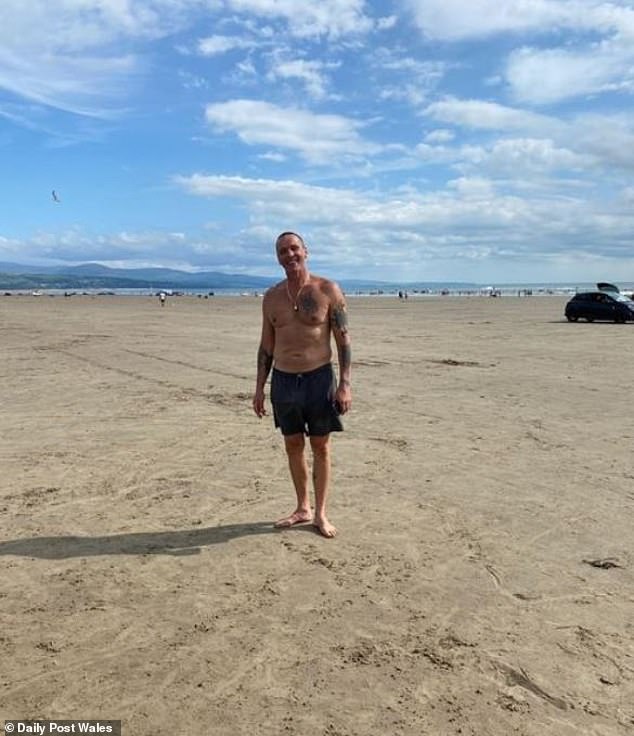 Sam McKeeder (pictured), 57, is a builder and granddad who swam out to rescue the six-year-old boy who had come off the inflatable swan and was face-down in the water

It comes as Brits have swarmed to beaches across the UK during the hot weather this week with Friday being the UK’s hottest August day since 2003.

People in Bournemouth were seen coming out of tents today after setting them up last night to make sure they would get the best spots.

Local police in North Wales reported ‘a considerable build up  of traffic’ in Abersoch as drivers made their way to the beach despite a councillor’s plea for visitors to avoid towns.

In Sandbanks, drivers said they had to wait 40 minutes in a queue to get into the car park.