Boy, six, ‘looked like he was dying’ after doctors failed to diagnose his appendicitis

A six-year-old boy ‘looked like he was dying’ after he developed sepsis when doctors failed to diagnose his appendicitis for nearly two weeks.

Kayne Oughton, of South Tyneside, didn’t get medical treatment for 13 days because doctors just thought he was constipated.

After spending days suffering with agonising stomach pain, Kayne became pale and sicker, and a nurse told his mother, Carly Oughton, to take him straight to hospital.

Medics then realised Kayne had a hole in his appendix and they rushed him to the Royal Victoria Infirmary in Newcastle for emergency surgery.

After two weeks in hospital he has now made a full recovery and is back to school –  but his parents are considering suing the NHS for failing to diagnose their son.

Kayne Oughton, six, was first taken to hospital on August 8 with severe stomach pain but doctors just thought he was constipated and sent him home, failing to diagnose his appendicitis for another 13 days

‘If his tummy hurts even a little bit now he starts crying, scared he’s going to have to go to hospital,’ Mrs Oughton said.

‘It’s horrible to see, it’s heartbreaking. What still goes through my head is what if I had just given him some Calpol and sent him to bed.

‘If I’d let him go to sleep, he wouldn’t have woken up the next morning.’

When Kayne first began to complain of stomach pain, his mother – who also has an eight-year-old son called Johnny – wasn’t too concerned.

But the next day, on August 8, he was still in agony and refused to eat or drink, so his mother took him to nearby South Tyneside District Hospital.

‘They felt his tummy and said he was constipated, even though I’d explained he was like clockwork,’ Mrs Oughton, 29, said.

Seeking a second opinion, Mrs Oughton then took him to Queen Elizabeth Hospital in Gateshead on August 11, but was again told he was suffering from constipation. 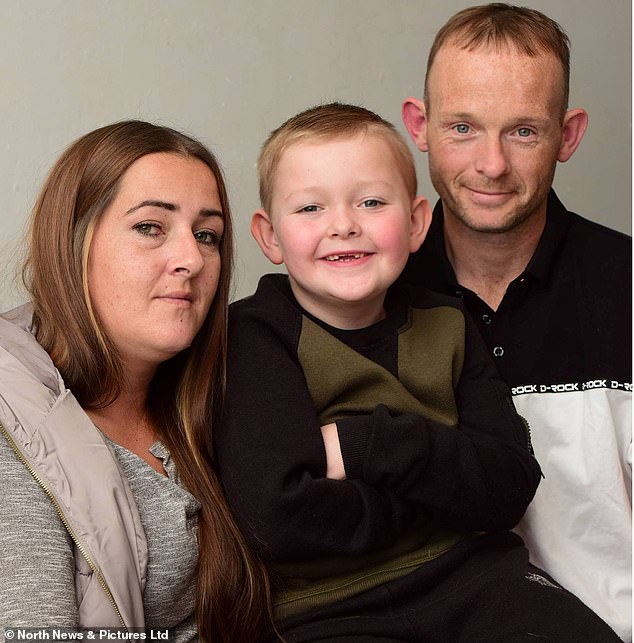 Victoria and Wayne Oughton (pictured with their son) are considering suing their local hospital for failing to diagnose Kayne’s appendicitis, which developed into life-threatening sepsis 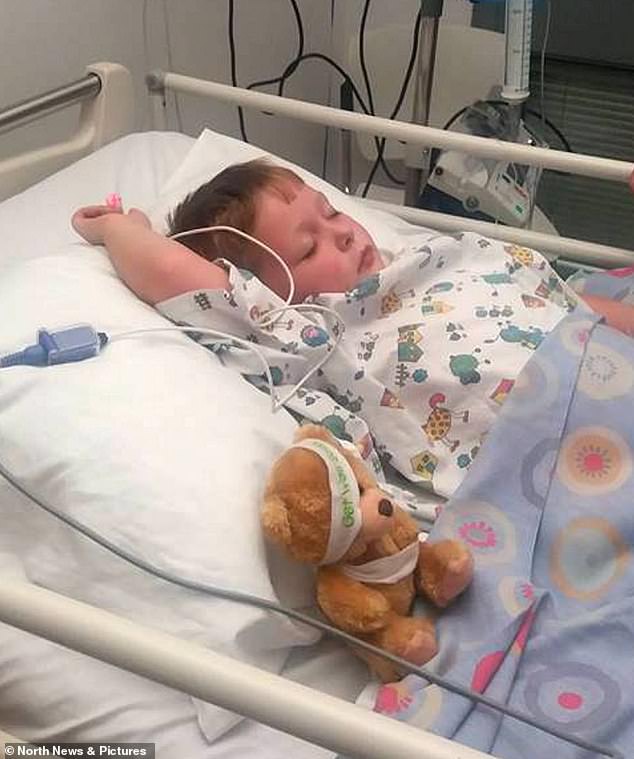 Kayne went to three different hospitals and a GP surgery in the space of two weeks as his mother desperately tried to find medical help for him, and eventually had his appendix removed nearly two weeks after they first went to A&E

But as Kayne’s stomach pains continued to get worse, she grew increasingly concerned that something was seriously wrong, and took him back to a hospital on August 20, 12 days after their first hospital visit.

‘I took him back to the hospital in Shields because he had a temperature,’ Mrs Oughton said.

‘He was ten times worse, he had black rings around his eyes, he was pale, he looked like he was dying in front of us.

‘They kept him in overnight but in the morning they let him go home.

‘When we left he was still crying and screaming in pain, but they couldn’t get to the bottom of why. His temperature was through the roof.

‘I said to the doctor “is this not appendicitis?” and he said “believe me if this was appendicitis you would have known about it by now.”‘

In desperation, Mrs Oughton visited the nurse at her local GP practice later the same day, where she was ordered to take her son straight to hospital.

Armed with a note from the nurse, Kayne was seen by doctors at Queen Elizabeth Hospital, where blood tests revealed he had an extremely high white blood cell count, suggesting a serious infection.

Diagnosed with a perforated appendix, he was then transferred to Newcastle’s Royal Victoria Infirmary for emergency surgery to remove his appendix. 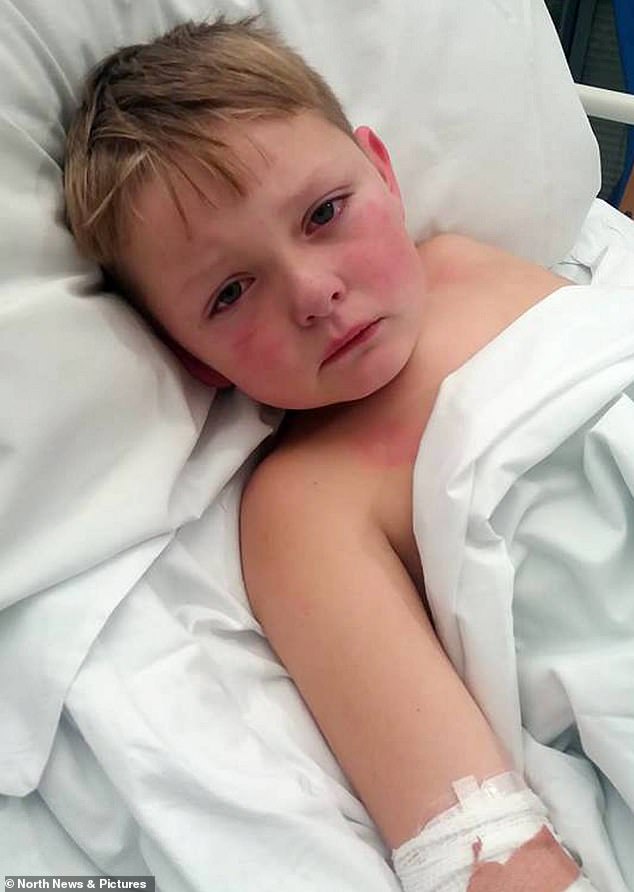 Kayne now gets terrified he will have to go back to hospital every time he has a stomach ache, his mother says, because he spent nearly two weeks living with the agony of appendicitis 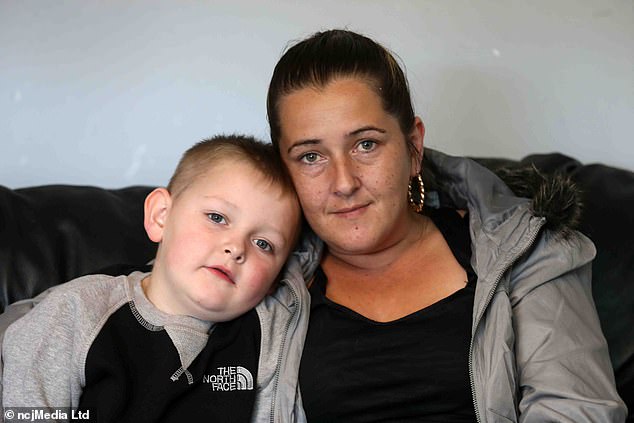 Appendicitis is a swelling of the appendix, a two to four-inch-long organ connected to the large intestine.

Appendicitis can cause severe pain and it’s important for it to be treated swiftly in case the appendix bursts, which can cause life-threatening illness.

In most cases surgeons will remove the appendix in an appendectomy – scientists aren’t sure why people need an appendix but removing it does not harm people.

The causes of appendicitis aren’t clear but it is thought to be caused by something blocking the entrance to the organ.

Symptoms include pain in the stomach which later travels to your lower right-hand-side and becomes severe.

Pressing on this area, coughing, or walking can all make the pain worse, and other symptoms can be nausea, vomiting, loss of appetite, diarrhoea and a fever.

Mrs Oughton said: ‘It was nearly two weeks he’d been like that, crying out, and as soon as we got him there they rushed us into theatre.

‘There were emergency surgeons at the RVI waiting for him to get there.

‘The surgeon came to see us afterwards to say that we were very, very lucky, and if we hadn’t got him there he could have died.

‘I had done right by trusting my instincts.’

Sepsis is a complication of an infection which, if not treated quickly, can cause the organs to shut down and kill the patient.

Mrs Oughton claims her worries over Kayne’s condition were not taken seriously enough by doctors when she first visited hospital.

‘Of course a doctor has medical knowledge, but you know your child better and you know if they’re not right,’ she said.

‘I know Kayne has a really high pain threshold, that’s something I know as his mum, and when he’s screaming in pain I know it’s something serious.’

Mrs Oughton and her husband, Wayne, have now hired solicitors to investigate the case and find out whether it was ‘negligent’ of the hospital to turn her son away.

Bryony Doyle, clinical negligence solicitor from law firm JMW said: ‘I am concerned about the care provided to Kayne and the fact that he was sent away from hospital on three occasions without appendicitis being suspected and he went on to develop the potentially fatal condition sepsis. 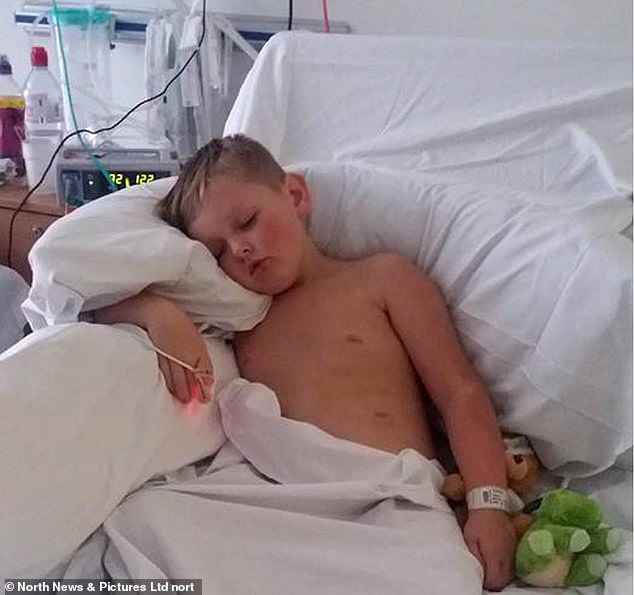 It took medics so long to work out Kayne had appendicitis that he developed sepsis, a complication of infection which can quickly become deadly and cause the organs to shut down 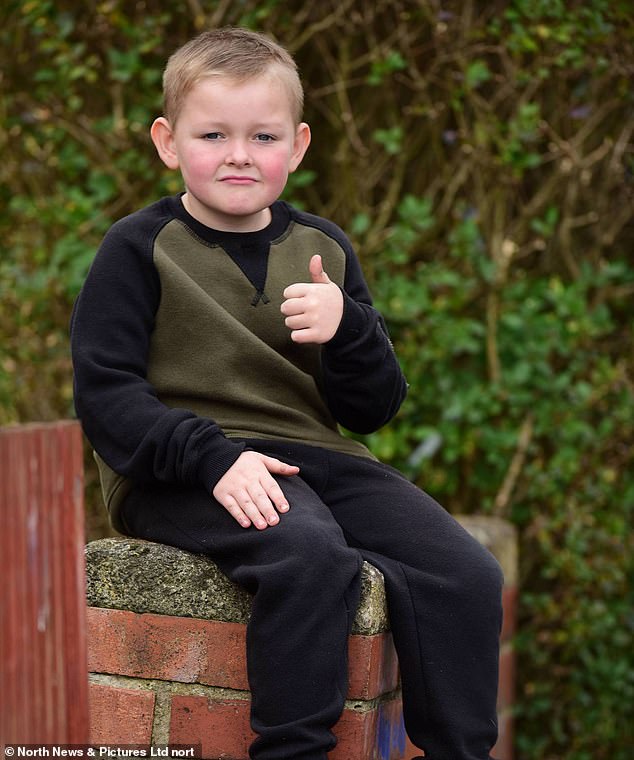 ‘This has been extremely traumatic for Kayne and his family and it is not the first time JMW has dealt with a case involving severe injury to a child after a parent’s concerns were ignored.

‘Parents are very good at identifying when something is wrong with their child and we would urge hospitals to properly heed their concerns.

‘Unfortunately this does not happen enough and the consequences can be completely devastating.’

Dr Shaz Wahid, medical director for South Tyneside NHS Foundation Trust, said: ‘Patient safety and care of the highest quality are our top priorities so we are very sorry to hear that this family were unhappy with their experience with us.

‘Whenever issues are raised about a patient’s treatment we always investigate thoroughly to see if there is anything we can learn to make improvements for the  future.

‘If they wish to contact our customer services team we can assure them that we will speedily look into their concerns in detail.’