Boy, six, loses foot after his mother runs him over driving a ride-on lawnmower

Boy, six, loses foot after his mother runs him over driving a ride-on lawnmower thinking he was a paving stone

A six-year-old boy lost his foot after his mother accidentally run him over him with a lawn mower, initially thinking she’d just hit a paving stone.

Jonah Douglas was playing outside when mother Bethany, 41, crashed into him while driving the ride-on garden tool at their home in Missouri.

He was rushed to hospital where doctors revealed the devastating news that his foot couldn’t be re-attached, and a Syme’s amputation was performed through his ankle.

His parents feared their sports-mad son would be out of action for the rest of the year but Jonah has surpassed all expectations and is walking without assistance just two months following the major surgery.

Jonah Douglas was playing outside when mother Bethany, 41, pictured together, crashed into him while driving the ride-on garden tool at their home in Missouri 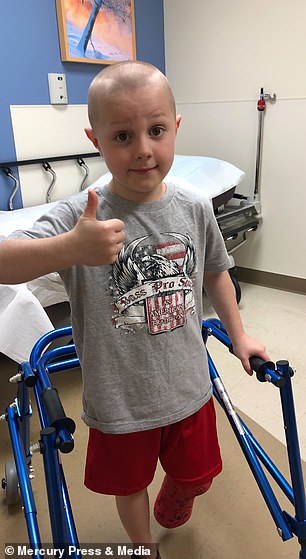 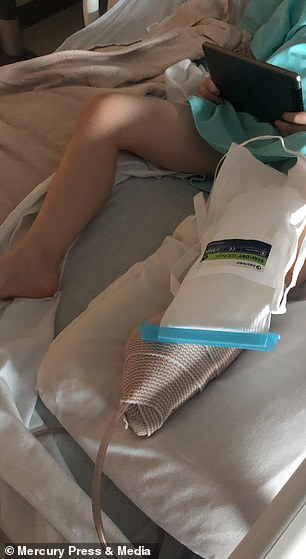 Jonah, pictured left, was rushed to hospital where doctors revealed the devastating news that his foot couldn’t be re-attached, and a Syme’s amputation was performed through his ankle, pictured right

Bethany said: ‘He has well exceeded what I was hoping for him.

‘It was very emotional seeing him walk with his prosthetic. I cried the whole first day of him walking on it.

‘He has been on the trampoline bouncing and having lightsaber fights with his brother since.

‘I’ve not seen him running yet but I’m sure it will come soon.

‘It’s inspiring to me as an adult. We can learn so much from this kid and his mentality.’

Bethany reversed over Jonah’s foot as he approached the lawnmower from behind, to grab hold of a cup of water which was balancing on it.

The mother-of-five, from Mount Vernon, says she felt a bump and thought she had run over a paving stone before hearing Jonah’s screams over the hum of the machinery.

The ex-trauma nurse had previously warned her children to keep away from the lawnmower, but Jonah thought he was safe from behind and didn’t expect the machine to reverse. 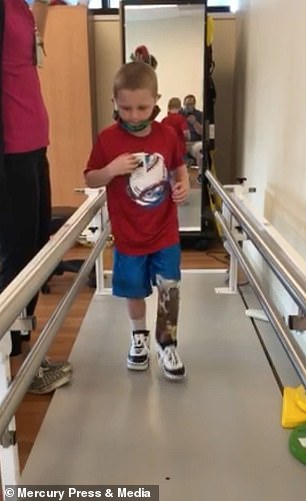 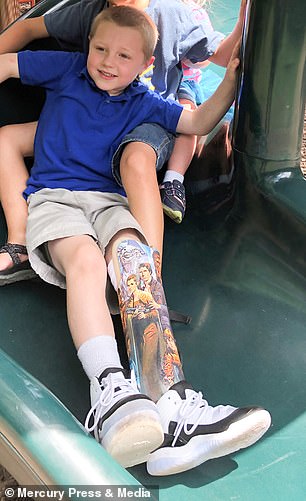 Jonah’s parents feared their sports-mad son, pictured right with his prosthetic on a slide, would be out of action for the rest of the year but he has surpassed all expectations and is walking without assistance, pictured left, just two months following the major surgery 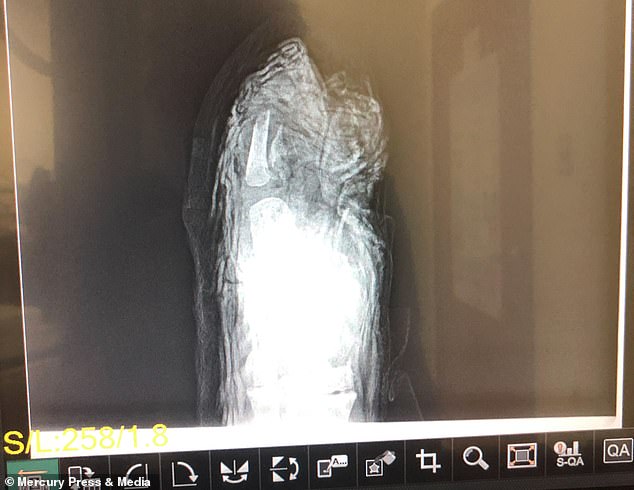 Tragically, it was the second amputation the family have had to deal with in six months, Jonah’s sister having lost her right leg above the knee at the end of last year following complications related to a car accident she was in.

Bethany said: ‘We had just got her out of hospital at the end of February of this year and then a few months later we had another amputation to deal with.

‘Sometimes you think, have I done something wrong?

‘It’s complicated to get your heart and head around.

‘There’s hope because they are both still here though. That’s the silver lining.

‘They’ve just lost a couple of legs in the process.’

The family have since sold the lawnmower in a garage sale but Bethany says the tragic accident won’t stop them getting another one in the future.

She said: ‘I was worried the sound of lawnmowers might bother Jonah but he has been out in the yard while the neighbours use theirs and he is fine with it.

‘I will definitely mow again at some point. It was just a freak accident.

‘I don’t want my kids to grow up fearful or change their lifestyle because accidents happen.

‘However, I think they listen to me more now when I tell them not to go near something.’