Boy suffers from dwarfism that affects less than 30 people

An eight-year-old boy has a form of dwarfism that is so rare it is thought to affect less than 30 people worldwide.

Landen Johnson, from Lincolnton, North Carolina, suffers from primordial dwarfism with Ligase 4 deficiency, which is thought to have just 28 patients globally.

At only three-feet tall and weighing less than his three-year-old sister Hannah Grace, Landen is expected to grow just another foot at best in his lifetime.

The Ligase 4 deficiency aspect of his disorder also affects his immune system, which has left him unable to fight off everyday infections.

Landen, who wears clothes for toddlers, was therefore forced to undergo a bone-marrow transplant five months ago, which required he first endure chemotherapy that left him vomiting and caused his hair to fall out.

Although on the road to recovery, Landen is taking a cocktail of medications and has to go to hospital three times a week, with doctors saying it will be months before he is fully healthy.

Despite Landen likely facing the challenges of a little person in the future, his parents believe his brave, outgoing personality will stand him in good stead.

His father Luke, 34, a pastor, said: ‘I expect to see him productive in his adult life, especially as determined as he is and as wide open as he is. He can do anything he wants to do.’ 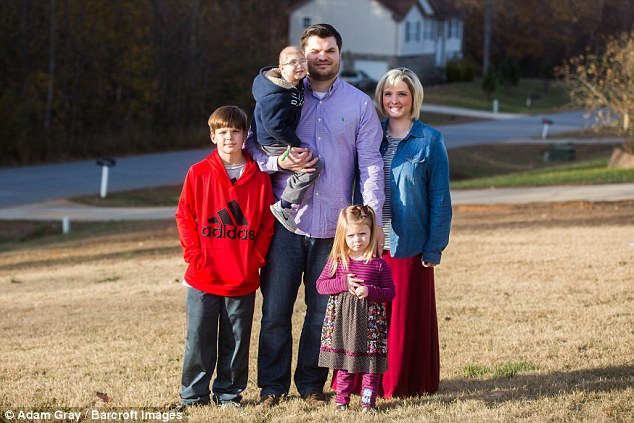 Despite Landen (pictured being held by his father Luke, 34) likely facing the challenges of a short person in the future, his parents believe his outgoing personality will stand him in good stead (pictured: brother Brayden, 10, sister Hannah Grace, three, mother Amanda, 32) 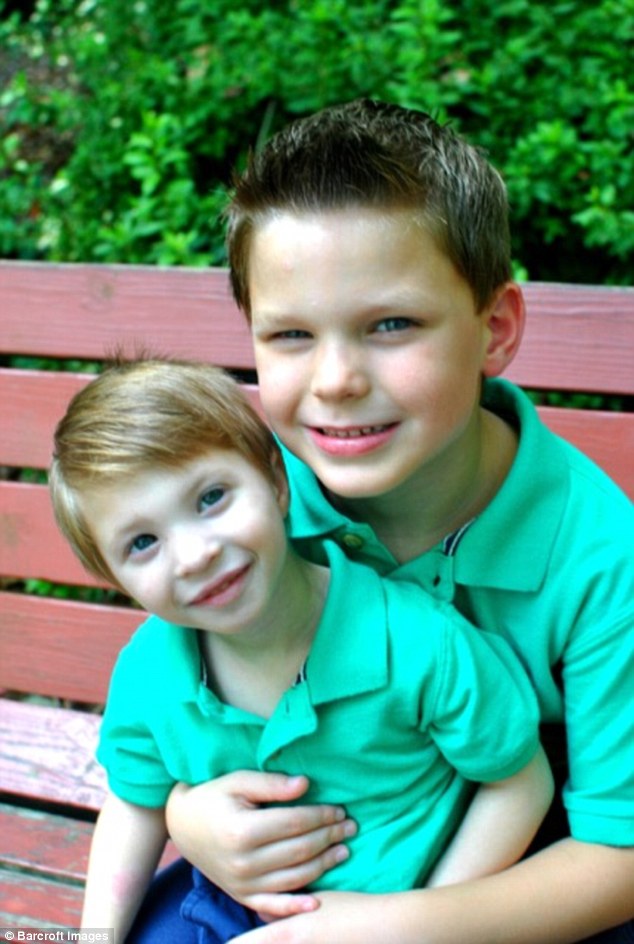 Doctors hoped Landen’s sister or brother (pictured) would a match for a bone-marrow transplant, however, neither were. He was later paired with a suitable donor

WHAT IS PRIMORDIAL DWARFISM WITH LIGASE 4 DEFICIENCY?

Primordial dwarfism is a group of disorders that begin in the womb and cause proportional but extremely delayed growth.

The average height of a sufferer is less than 2ft 10in.

There are six different forms of primordial dwarfism, with ligase 4 deficiency being one of them.

Primordial dwarfism with ligase 4 deficiency is caused by a genetic mutation.

There are just 28 known cases worldwide.

Bone-marrow transplants may be required.

‘Our prayer is that Landen lives a long, full and healthy life’

Speaking of his size, Landen’s mother Amanda, 32, said: ‘He wears a size 3T clothes, which are meant for boys aged three and he has to have [an] adjustable waist.

‘He is eight years old and he is almost about the same size as his three-year-old sister.’

Although Landen’s parents worry about their son’s future, they believe it will be bright, with Luke saying: ‘I admire his strength through everything he has been through.

‘Our prayer is that Landen lives a long, full and healthy life.

‘We’re going to challenge him and motivate him to do anything he feels God leads him to do even though he is going to be smaller and he may have more health challenges, he doesn’t have to limit himself.

‘He is teaching me a lot about faith and he has taught me a lot about what it means to follow the lord and be strong, even when you feel so weak sometimes.’ 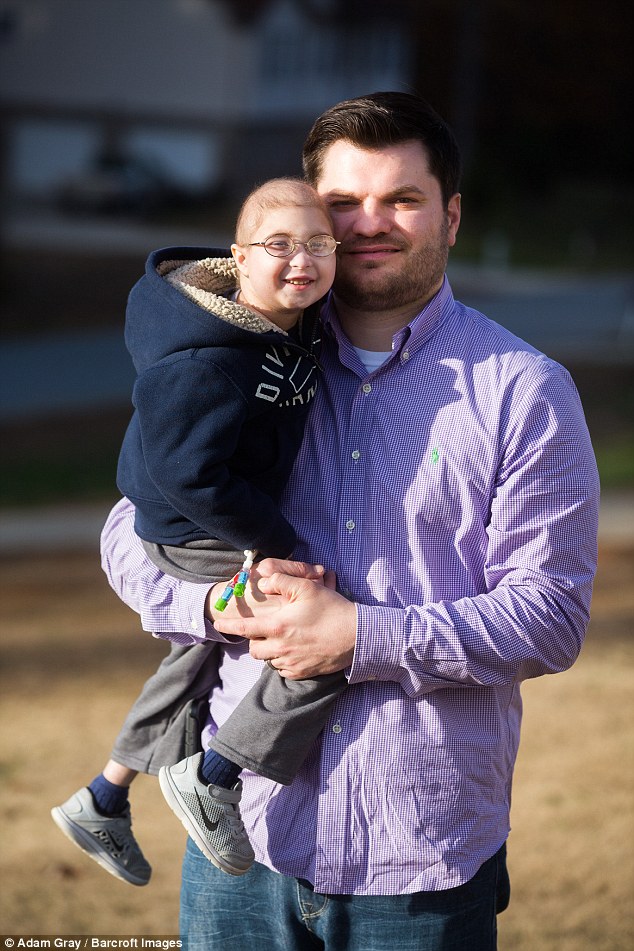 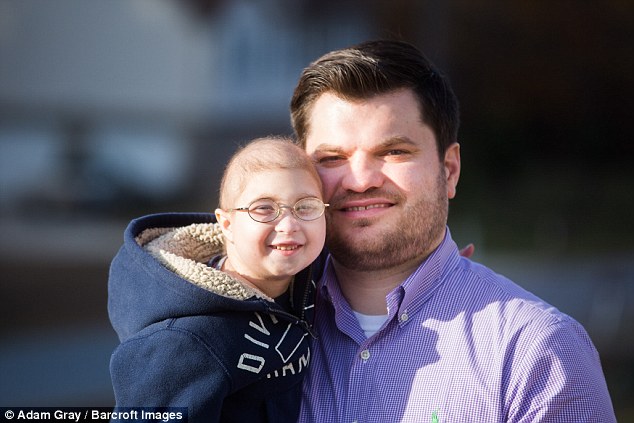 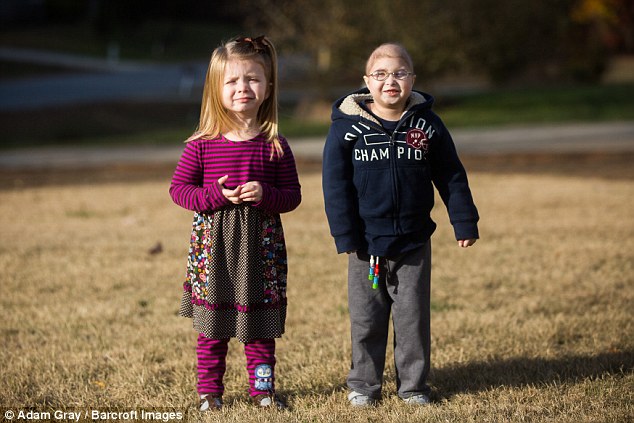 Landen is the same height as his sister, despite being five years older than her 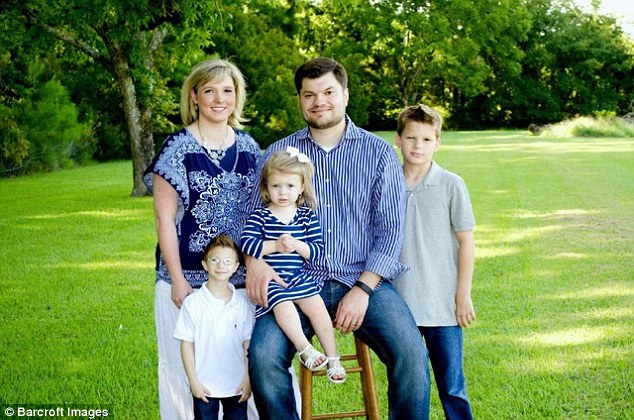 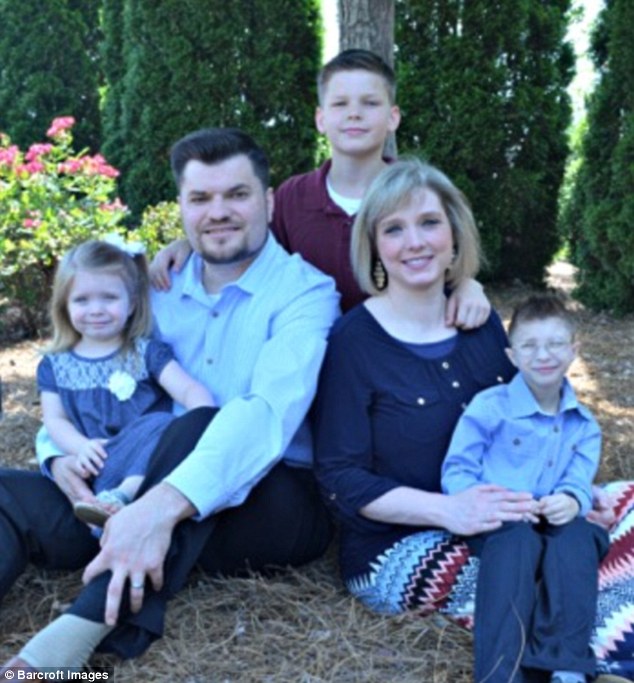 Despite the shock, she added the family were forced to pick themselves up and move forward 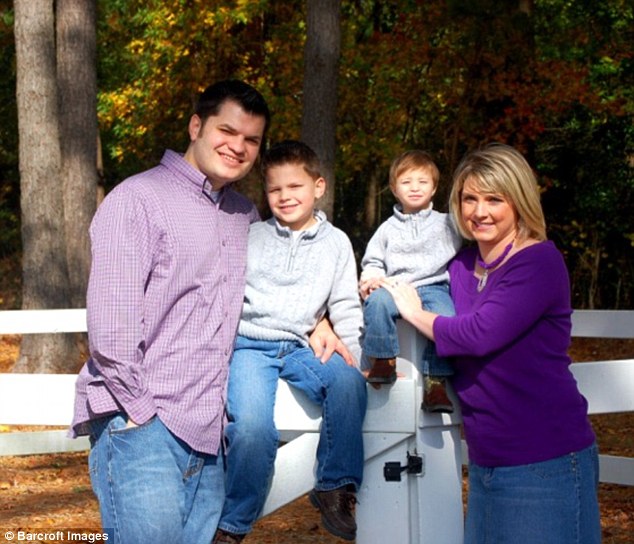 Struggled to gain weight as a baby

When Landen was born, doctors noticed he was underweight but were not initially concerned.

She added: ‘He weighed five pounds, six ounces when he was born, which was nothing alarming at that time. There were no clues that there was anything wrong.

‘It wasn’t long after he was born that we noticed he wasn’t gaining weight.

‘We started, probably a couple of weeks after he was born, going to the doctor for weight checks every week and then from there, because he wasn’t gaining weight, he was referred to different doctors to figure out what was going on.

‘They tried formula with extra calories to see if that would help but it didn’t. Other than that, he ate regularly.’ 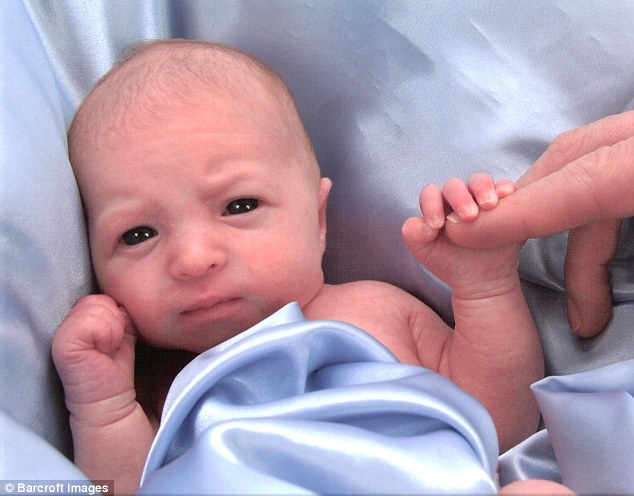 When Landen was born, doctors noticed he was underweight but were not initially concerned 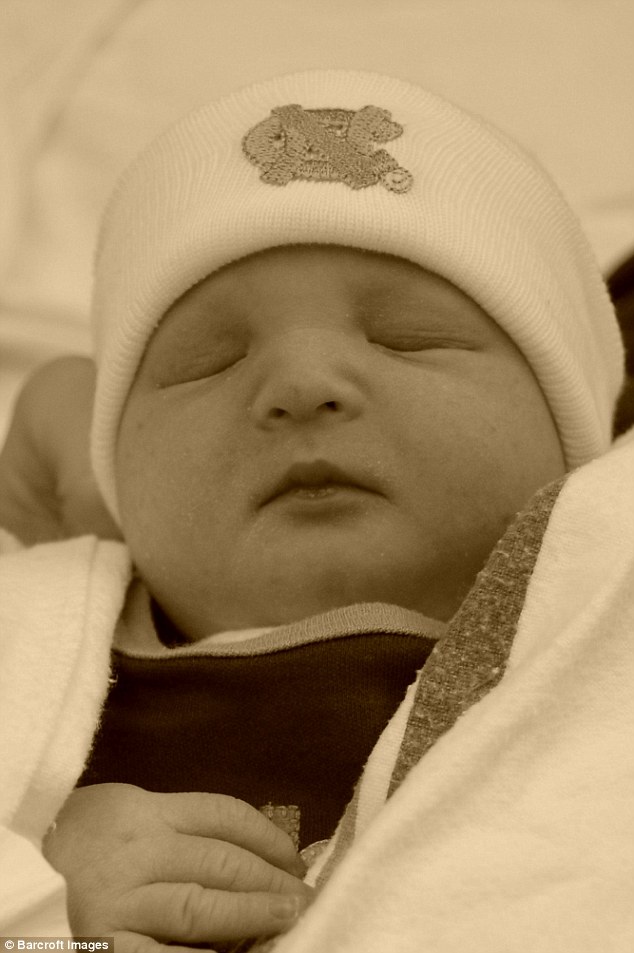 Weighing 5lbs 6ozs, Amanda said Landen looked like a normal baby just on the small side 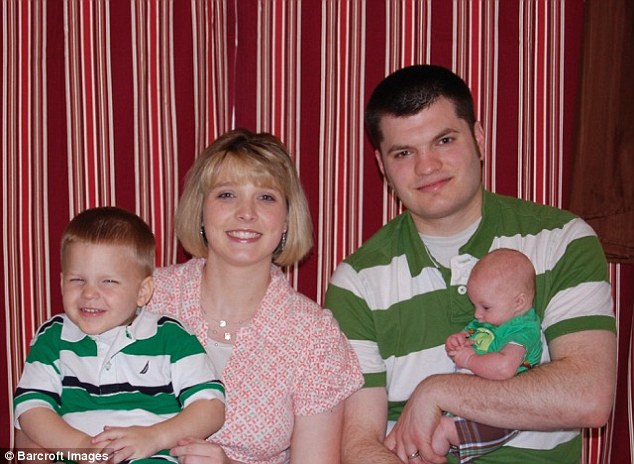 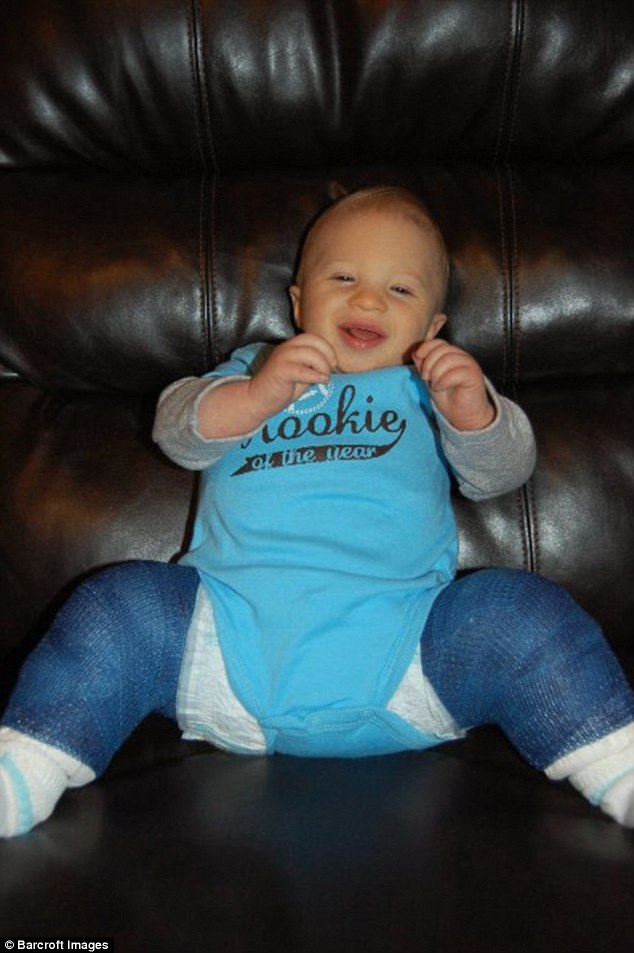 After multiple hospital appointments, Landen was diagnosed with dwarfism at six months old 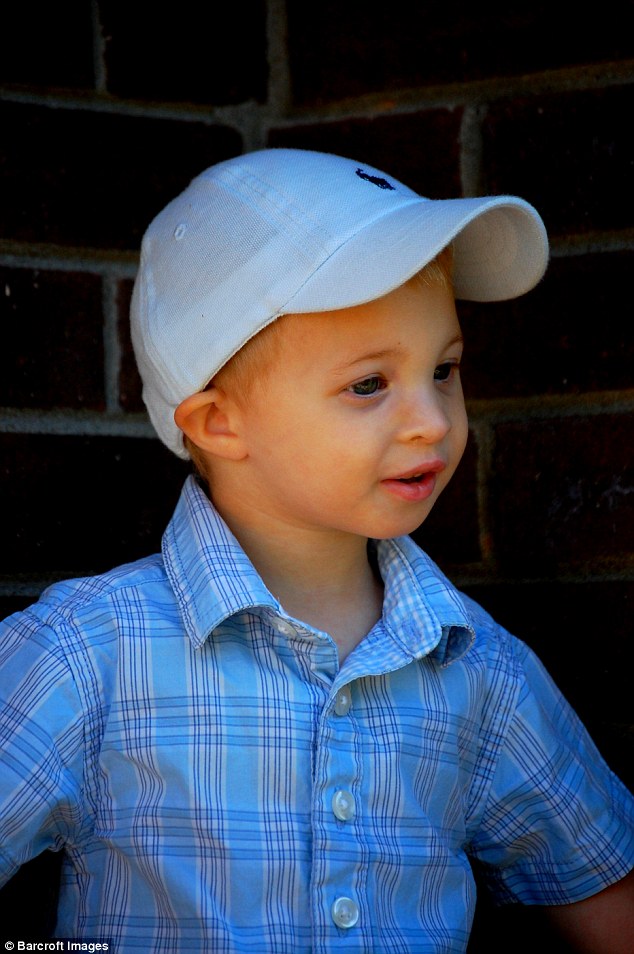 Landen was a happy, confident child until he was diagnosed with his immune disorder at three

‘We hit a brick wall’

Rather than putting on weight, Landen initially dropped to just 4lbs, 11oz and only then started to gain weight at a slower rate than average.

His lack of growth baffled doctors, prompting Landen’s parents to visit at least four specialists to try and get him diagnosed.

Luke said: ‘When he was six months old we were referred to a geneticist at UNC Chapel Hill.

‘We went to that appointment like we did the others not expecting to find anything out, but we went in and saw her, and she started doing a number of detailed measurements on Landen and that is when she diagnosed him with primordial dwarfism.’

Amanda added: ‘The best way I know to describe how it felt getting the diagnosis that day was like hitting a brick wall.

‘We were moving on with life, not really expecting anything and all of a sudden, we get this answer out of the blue and we hit a brick wall and then we have to pick ourselves up and say, “What now?” 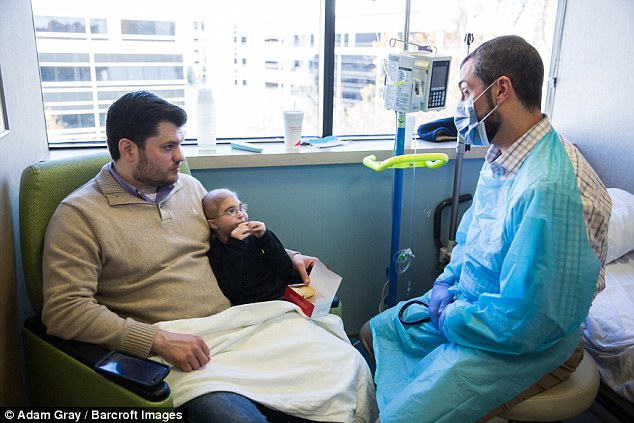 Landen was told he needed a bone-marrow transplant to build up his immune system (pictured in hospital with Dr Philip Roehrs, who performed the procedure) 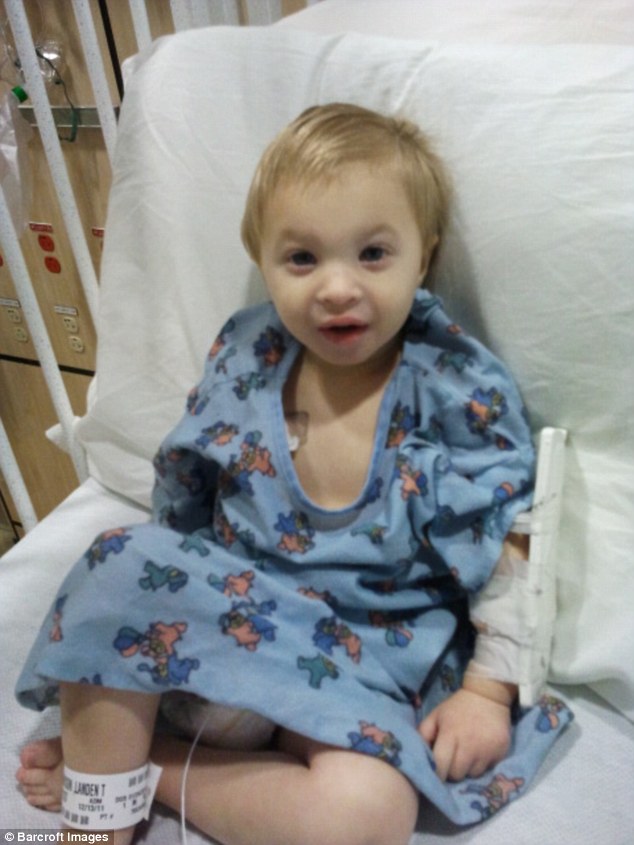 Landen first had to have chemotherapy, which caused him to vomit and feel nauseous 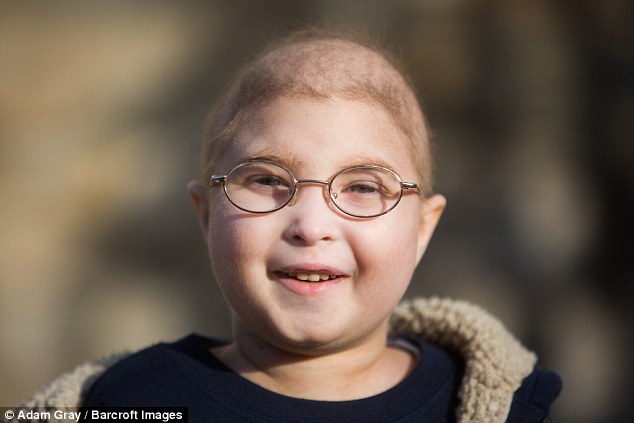 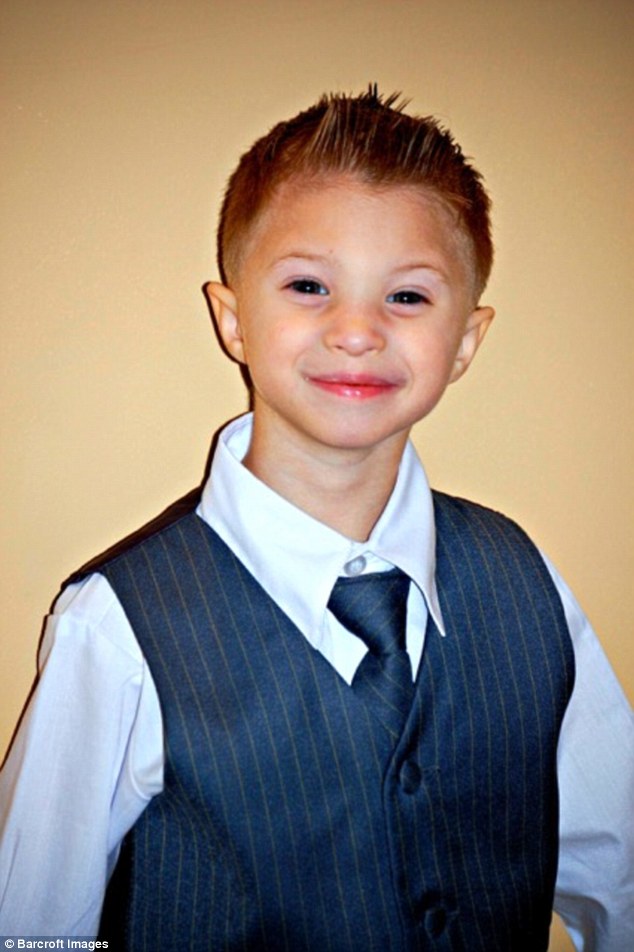 The transplant was a success, but doctors warn recovery can take months (date unknown)

Despite his devastating diagnosis, Landen was a confident, happy child, until, in 2013, at three years old, his family were told he had Ligase 4 syndrome, which causes sufferers immune systems to attack themselves.

Landen was hospitalised several times due to his body being unable to fight off everyday viruses.

Doctors told his family a bone-marrow transplant would be the the best way to ensure he would have a healthy future.

Although a sibling is usually the best match for a bone-marrow transplant, neither Landen’s sister or brother Brayden, 10, were matches.

A match was found eventually found in Europe last October via a national bone marrow registry.

Before the transfusion could go ahead, however, Landen was forced to undergo chemotherapy.

Luke said: ‘He had to go through two weeks of conditioning, where they use chemotherapy.

‘The conditioning process tears down his current immune system so that they can do the transplant with the donor cells and then build a new immune system for him.

‘He handled it really well. Some of the side effects were of course, nausea and vomiting, he lost his hair after the last one.’

After being treated at the Levine Children’s Hospital in Charlotte, North Carolina, Dr Philip Roehrs, who specialises in paediatric bone-marrow transplants, says Landen is still at least several months away from being fully recovered.

Dr Roehrs said: ‘His donor’s immune system is still learning that Landen is the new home and hopefully over several months we will be able to back down on those immune suppressants, and then that immune system will really start working well and control these viral infections.’