Boy, two, has his arms and legs amputated because of a mystery infection that has baffled doctors

A toddler was forced to have the lower part of all four of his limbs amputated after being struck down by a mystery infection.

Jeremiah Cox, two, started to develop a fever on September 29 – shortly after his pregnant mother Ashley, 19, went on maternity leave.

After being rushed to Riley Children’s Hospital, Indianapolis, Jeremiah’s health took a rapid turn for the worse when purple bruises began to cover his body.

Doctors diagnosed him with septic shock and the condition purpura, which they believe came about from an unknown bacterial infection.

Although antibiotics managed to kill the infection, the blood supply to Jeremiah’s limbs had already shut down and the infection threatened to spread.

To save his life, medics were therefore forced to amputate his limbs below the knees and elbows.

More than a month later, Jeremiah is still in hospital, where he is relearning how to crawl and even eat.

Jeremiah Cox was forced to have the lower part of all four of his limbs amputated after being struck by a mystery infection. The unknown bacteria caused his body to go into septic shock, which reduced his blood pressure to such low levels it cut off the blood supply to his limbs

Pictured before he became unwell, Jeremiah had been playing in the park just the day before he developed a fever and started vomiting. His parents then rushed him to hospital

While her son fought for his life, Jeremiah’s mother Ashley Cox (pictured with her partner Nicholas Thompson and their other three children) gave birth to her newborn (pictured)

Jeremiah had been happily playing in the park just the day before bruise-like blotches covered his entire body.

When the youngster developed a fever and started vomiting uncontrollably, his parents rushed him to the emergency room, where things took a dramatic turn.

‘Just to watch your child lay there and watch everything die, and then basically watching your son die in front of you – it’s crazy,’ Ms Cox said.

Due to doctors being unable to determine the cause of his purpura, the gave him an antibiotic in the hope it would kill any underlying bacterial infection.

‘If they didn’t give it to him my boy wouldn’t be here,’ Ms Cox said.

Purpura occurs when small blood vessels burst, causing blood to pool beneath the skin and appear as purple-coloured spots.

Despite the youngster’s treatment being a success, his dangerously low blood pressure had already cut off the blood supply to his limbs, leaving doctors with no choice but to amputate.

Although Jeremiah is out of intensive care, his recovery is far from over, with medics hoping to move him to a rehabilitation unit later this week.

While there, the youngster will have to relearn how to crawl and even eat, as well as how to walk in the hope he will one day be given prosthetics.

Doctors have told Jeremiah’s parents they may never know the cause of his life-threatening illness.

The mysterious infection caused Jeremiah to develop the condition purpura, which occurs when blood vessels burst and blood pools beneath the skin (pictured on his face). Unsure how best to treat the youngster, doctors tried an antibiotic, which managed to kill the bacteria

Although the treatment was a success, the damage to Jeremiah’s limbs had already been done, with the infection threatening to spread up into his body unless doctors amputated. After more than a month in hospital, he is ready to start rehab where he will relearn how to crawl

The rash usually appears on the legs or bottom and may be accompanied by pain in the knees, ankles or stomach.

It’s not usually serious, and isn’t contagious, but can sometimes lead to kidney problems.

Most people with HSP make a full recovery. Any kidney problems usually get better without treatment.

But sometimes HSP can be severe and last several months, particularly in adults.

There’s also a small chance the kidneys could be permanently damaged (chronic kidney disease). This is why it’s important to have regular check-ups.

While her son fought for his life, Ms Cox was forced to give birth to the couple’s fourth child.

Although the pair are grateful their son managed to pull through against the odds, they fear the day Jeremiah realises he is different.

Ms Cox is still on maternity leave and is struggling to care for hospitalised Jeremiah, who is her eldest, as well as a newborn and her two other children.

The family, who currently rely on Mr Thompson’s income, have set up a fundraising page to help make ends meet.

Jeremiah’s story comes as another mysterious illness, which has been likened to polio, is sweeping the US.

In 2018 so far, at least 72 children in 22 states have been diagnosed with acute flaccid myelitis – an infection that causes sudden paralysis at random – and another 83 are being investigated. 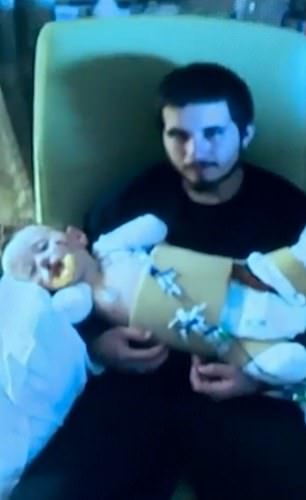 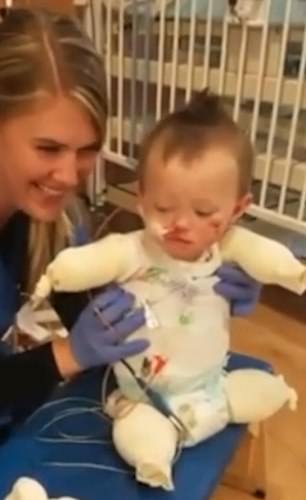 Mr Thompson (pictured left with Jeremiah after the operation) claims his son is starting to realise his limbs have gone. Medics hope the youngster (pictured right recovering in hospital after the amputations) will one day learn to walk with the use of prosthetics

While he battled the mystery infection, Ms Cox says she thought she was watching her son die