A seven-year-old boy who died from rare bone cancer this week has inspired the governor of New Jersey to sign an executive order for broader medical marijuana access.

Jake Honig, nicknamed ‘Jake the Tank’ for his strength during his five-year battle with bone cancer, was in remission for three years before his cancer came back and he lost his fight on Sunday.

His family were pressing for a change to medical marijuana laws and urging their community to write to lawmakers so Jake could have easier access to the medication that made his disease bearable.

On Tuesday, just two days after his death, Jake’s parents Mike and Janet, and sister Gianna, six, stood alongside New Jersey governor Phil Murphy while holding a photo of Jake as he signed the executive order. 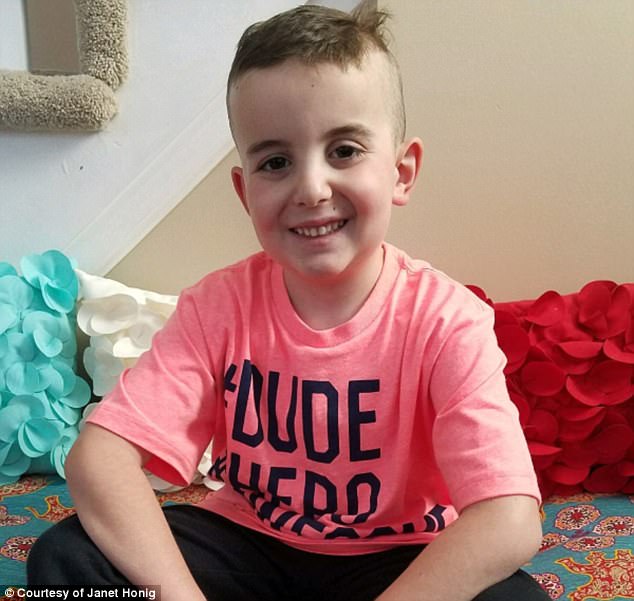 Jake Honig, seven, died on Sunday after a five-year battle with rare bone cancer. He and his parents were pushing for better access to the medical marijuana that eased his symptoms 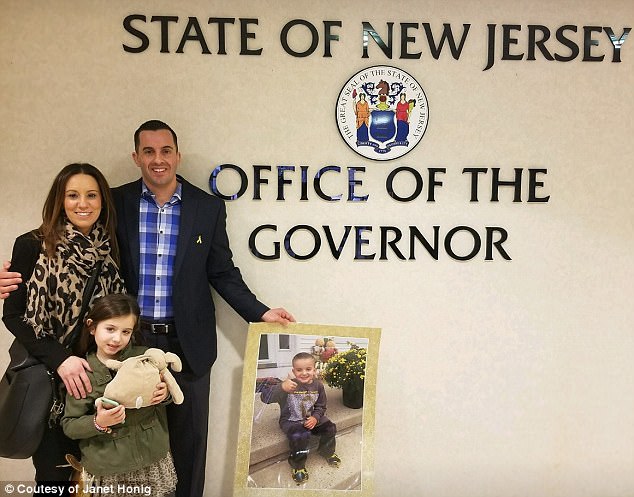 His parents Janet and Mike and sister Gianna, six, brought a photo of Jake to the press conference in Trenton, New Jersey, where the governor signed the order

Phil Murphy, who was sworn in as Governor of New Jersey last week, invited Jake’s family from Howell, New Jersey, to Trenton for the press conference where he signed the executive order on Tuesday.

He ordered a 60-day review of New Jersey’s current medical marijuana program with the goal to eliminate barriers for patients suffering from illnesses to provide better access to medical marijuana.

Two areas are up for review in Jake’s honor that include purchasing beyond the 2-ounce limit and allowing marijuana to be sold in oil form for easy dosing.

The governor is also considering allowing home delivery and expanding the number of licensed dispensaries in the state.

‘We will not deny people compassionate care any longer,’ Governor Murphy said.

New Jersey is one of the 29 states in the US which allow medical marijuana.

Currently the state limits marijuana prescriptions only to those who have certain state-approved conditions, leaving thousands out of the program.

The 15,000 people who benefit from the program only have five dispensaries to access in the state.

The executive order came just two days after ‘Jake the Tank’ lost his battle to cancer.

Change is happening fast, and Jake has our commitment to continue his legacy of inspiring people

Jake was sent home on hospice in December with six drugs that included anti-nausea medication, oxycodone and morphine.

His parents found that medical marijuana had become Jake’s best option to quell his symptoms as he did not experience the harsh side effects that came with the other drugs.

The cannabis helped keep Jake comfortable before his death, improving his appetite and even allowed him to go off of a few of the harsher medications.

However, Mike and Janet would have to heat up the marijuana each night in order to extract the oils because it is not currently available in oil-form.

Governor Murphy said on Tuesday: ‘We cannot turn a deaf ear to our veterans, the families of children facing terminal illness, or to any of the other countless New Jerseyans who only wish to be treated like people, and not criminals.’

Though Jake will not see the law enacted, the family hopes others suffering medical conditions can utilize the new laws once they are put in place.

His parents took to Facebook and wrote: ‘Change is happening fast, and Jake has our commitment to continue his legacy of inspiring people.’ 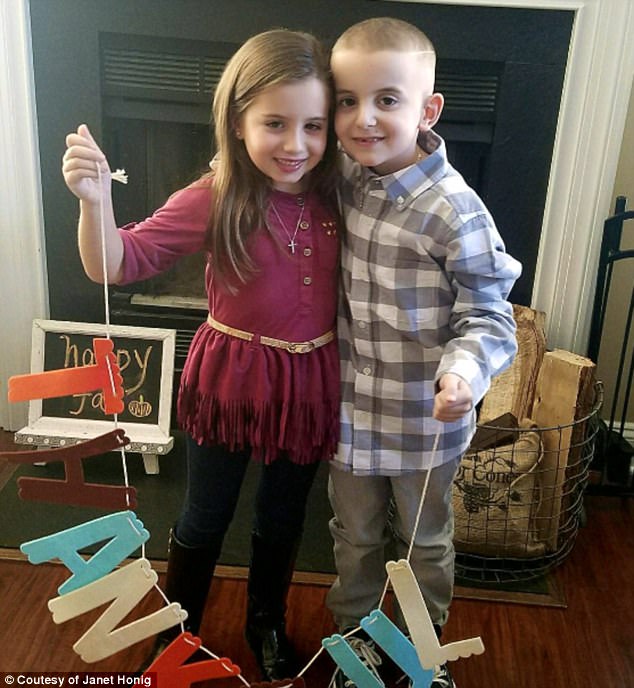 Jake, pictured with his sister Gianna, six, suffered from Ewing’s Sarcoma, a rare bone cancer that he was diagnosed with at two-years-old 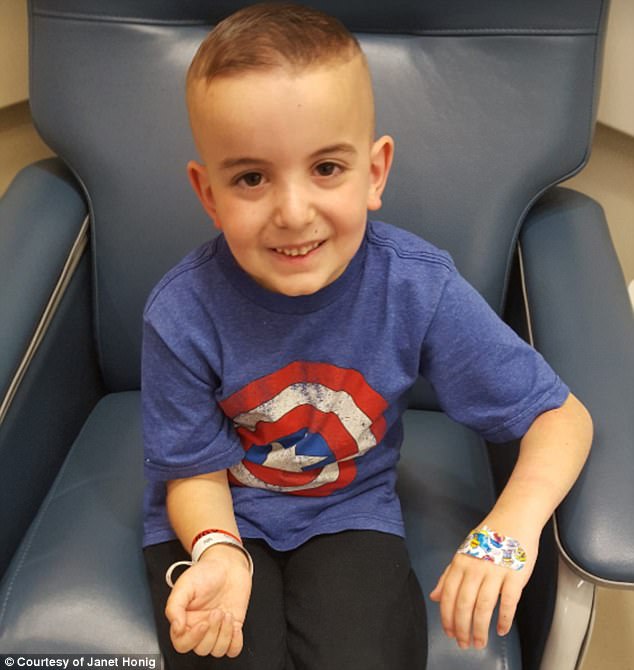 Ewing’s sarcoma is a rare type of cancerous tumor that grows in the bones or the soft tissue around the bones, such as cartilage or the nerves.

It usually affects people ages 10 to 20 and has a high rate of being cured.

Ewing’s sarcoma affects about 200 children and young adults every year in the United States and shows up slightly more often in males.

The most common bones affected are the pelvis, thigh (femur) and shins (tibia).

Pain is the most common symptom of bone cancer, though symptoms will vary depending on the position of the cancer in the body and its size.

Patients diagnosed with Ewing’s sarcoma are treated at specialist hospitals because the cancer is so rare.

A combination of chemotherapy, surgery and radiotherapy is commonly used to target the tumor.

Jake began his battle with cancer at age two when doctors discovered a malignant brain tumor.

He was diagnosed with Ewing’s Sarcoma, a rare type of cancerous tumor that grows in the bones, cartilage and nerves.

The disease is most common in people aged 10 to 20 and affects about 200 children and young adults each year.

Jake underwent surgery, 14 rounds of chemotherapy and 28 radiation treatments and had been in remission for three years.

But at his four-year scan in 2017, doctors discovered the cancer had returned.

He had another brain surgery, six rounds of chemotherapy and another 33 radiation treatments to try to kill the cancer.

Before Thanksgiving, a follow up exam revealed that the cancer was back in his brain and had spread down his spine.

By Christmas, a tumor had developed on his lower back and doctors at the Children’s Hospital of Philadelphia said there was nothing more they could do.

Mike and Janet took Jake home to keep him comfortable – which included providing medical marijuana when his symptoms got painful.

He died on Sunday in his home.

His parents took to Facebook on Sunday and wrote: ‘It was peaceful. It was painless.

‘Jake left us this morning. Although much too soon, we are extremely thankful for an incredible 7 years with an amazing boy. Jake had an ”old soul” and we will carry his sunshine with us forever.’