Until he was seven, Oakley Orange was a happy go lucky chap, always playing on his bike or trying to make people laugh with his cuddly toy husky dog Isabella.

‘Everyone loved him,’ says his mother Lorraine. ‘If he could put a smile on your face, he was happy.’

Oakley was finally growing out of his childhood asthma and life felt brilliant for the whole family. ‘And then,’ says Lorraine, ‘the world was turned upside down.’

During the summer of 2013 Oakley became floppy and lacking in energy. He spent hours cuddled up with Isabella on the sofa and developed tremors down his right side.

Assuming it was the beginning of epilepsy, doctors gave him an anticonvulsant drug called carbamazepine. And things spiralled.

A rash developed on his face and down his chest. His temperature shot up. Then his face and lips started peeling, golf ball-sized blisters started forming and, as he arrived in hospital, the top layer of skin on his back started sliding off.

By the time doctors diagnosed Stevens-Johnson syndrome – which causes the skin to burn from the inside from a toxic reaction to medication – his internal organs were starting to fail.

Oakley, who lost so much skin he was treated as a burns victim, spent five weeks in an induced coma on a life support machine and a further three weeks in intensive care.

Isabella was always by his side until Oakley left hospital in February 2014. And though the road to recovery has been hard it was made easier by the charity Make-A-Wish Foundation UK which arranges incredible experiences for very ill youngsters.

That year Oakley was asked to choose his One True Wish – and there was never any doubt. ‘He wanted to see the northern lights and ride with real husky dogs,’ says Lorraine. ‘And that’s what he did.’ With his whole family.

‘It was amazing – so peaceful in a beautiful hotel in Norway,’ says Lorraine. ‘He still talks about it all the time – he can’t get over meeting real huskies!’ 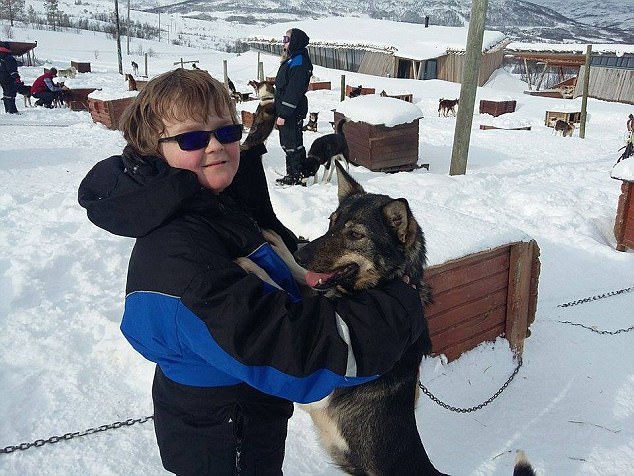 Now the Mail is asking readers to donate their old pound coins – which ceased to be legal tender this week – to our Quids for Kids appeal and make more dreams come true, arranged through Make-A-Wish, for seriously ill children this Christmas.

Like so many children helped by the charity Oakley’s illness came out of the blue, upturning family life for him, his parents Lorraine and Stephen, and his four siblings. Lorraine moved into Broomfield Hospital – a specialist burns unit – in Chelmsford, Essex, with Oakley, a 100-mile round trip from home in Kent, while Stephen looked after the other children.

When Oakley finally came home in 2014 he was unrecognisable. He had lost all his hair, his fingernails, part of his toes and was covered in dressings. But underneath he was the same boy.

Oakley will spend his life wrestling with the implications of his toxic reaction although he never complains. But the wish meant everything to his family who cannot thank Make-A-Wish enough for making his dream come true.