By Laura Forsyth For Mailonline

This little boy was curiously watching the lions at the zoo from behind a glass.

However, he got a first-hand account of how the animals marked its territory when one of the lions squirted liquid at the glass in front of his face.

The humorous clip, which was filmed in Calgary, Alberta in Canada, shows visitors gathering at the lion enclosure.

Spectators take photos and gasp as the ferocious animal suddenly moves from the grassy area and closer to glass that separates them from the wild cat.

One little boy is standing at the front of the group when he suddenly turns around to see what the commotion is about.

Wearing a red cat and bright blue T-shirt, the youngster places his hand on the clear glass and snatches it away quickly as the lion approaches.

As the big cat seems to turn its back on the crowd, it was at this point that it felt the need to relieve itself.

With its legs apart, liquid is then seen to be gushing against the window as the little boy jumps back with a fright. 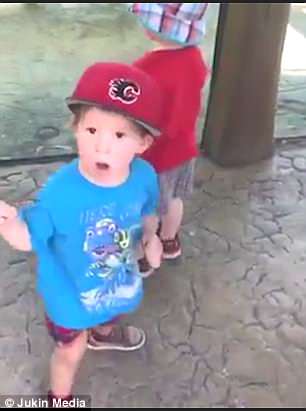 This little boy was clearly shocked after a lion turned around and sprayed liquid all over the glass at a zoo in Calgary, Alberta in Canada

The crowd is heard laughing as the youngster opens his mouth in shock and runs around staring at the spectators in disbelief.

Meanwhile the lion simply walks away with his tail trailing behind him after the hilarious deed.