Brody Osga has watched the sun longingly for all four years of his young life.

But Brody’s rare condition makes him so sensitive to the sun that even a short drive in a windowed car can leave the toddler covered in painful blisters.

He was born premature, weighing only a little over two pounds and just kept getting sicker and sicker while doctors scrambled to work out why.

After surgery after surgery and a revolving door of specialists, Brody was finally diagnosed with Chiari malformation III, a brain and skull defect that leaves him with chronic pain and unable to eat, in addition to being trapped indoors.

But for his fourth birthday, his family, community and the Make-A-Wish Foundation made the impossible, possible – by creating a special tent behind Brody’s house where he could run, laugh and play with other children for the day.

For his fourth birthday, Brody OSga got to go ‘outside’ in a special tent for the first time. He suffers from a rare brain and skull defect and is so sensitive to sun that his skin blisters after being exposed for just a few minutes

Brody’s mother, Julia Rubin, was just 26 weeks along when she went into labor.

Her tiny son was born weighing just two pounds and one ounce.

At first, doctors attributed Brody’s general sickliness to his very premature birth, but his condition only worsened as he grew older and bigger.

Brody kept getting infections, including pneumonia.

Things went on that way for weeks, then months. Nearly a year-and-a-half passed and still Julia had not been able to bring her son home.

His medical team kept operating and running more tests – it seemed that as soon as they’d patched one issue another would arise.

A feeding tube, countless operations, some 18 months and as many sleepless nights for Julia, she finally got an answer from his doctors. 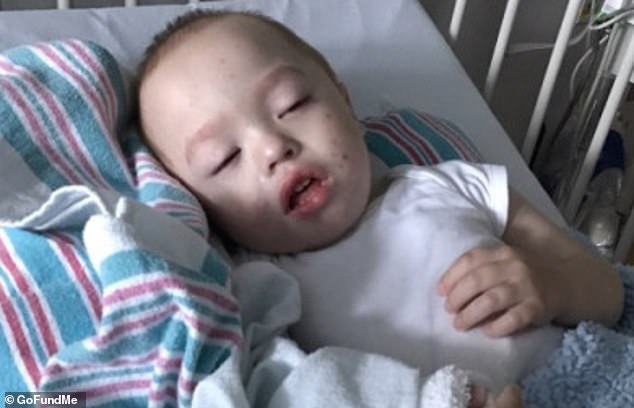 Chiari malformation, Brody’s condition, puts enormous pressure on a part of his brain that controls his digestion, balance, speech and many other elements of his functioning

Brody has Chiari malformation III. As much as she wanted some clarity, this was hardly good news.

In Chiari malformations, the skull doesn’t develop properly and is either not the right shape or too small for the brain.

As a result, the part of the brain that sits at the base, called the cerebellum, is squeezed downward into the small opening at the base of the skull through which the spinal cord connects to the brain.

For some patients, the condition’s symptoms are unnoticeable.

But in Brody’s severe case, the cerebellum is being pressed hard into the spinal canal, putting the area of the brain that controls the toddler’s speech, balance, digestion, swallowing and breathing. 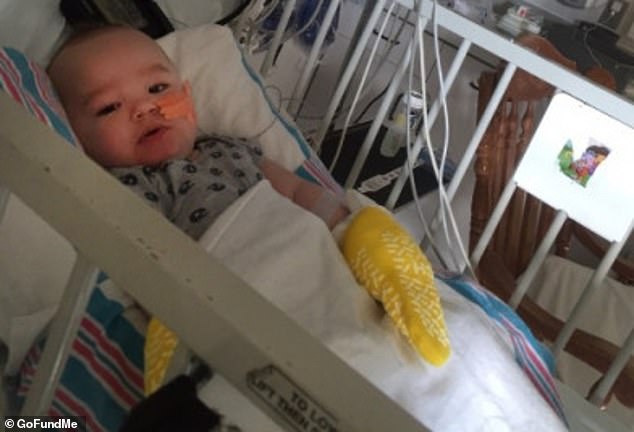 After he was born at just 26 weeks, Brody spent nearly the first year-and-a-half of his life in the hospital

He lives in constant pain and has to wear a special backpack that feeds him at all times. It’s not clear how Brody’s Chiari malformation causes his incredible sensitivity to the sun.

After his year-and-a-half in the hospital, Brody’s community and mother had to launch a fundraiser to make a room equipped for his care at Julia’s Griswold, Connecticut, home.

But Brody took a turn for the worse in 2017, according to his Go Fund Me page.

Doctors informed Julia that children with severe Chiari malformations like Brody’s often don’t live to adulthood. They handed her brochures about resources for the families of terminally ill children.

One of them was for the Make A-Wish-Foundation.

‘I thought the best wish would be like something he couldn’t do like a regular child,’ Julia told InsideEdition.com.

‘We wanted a play area that he could play outside.’

Make-A-Wish found a UK company that makes specialized tents that block dangerous UV rays and keep the temperature inside controlled. 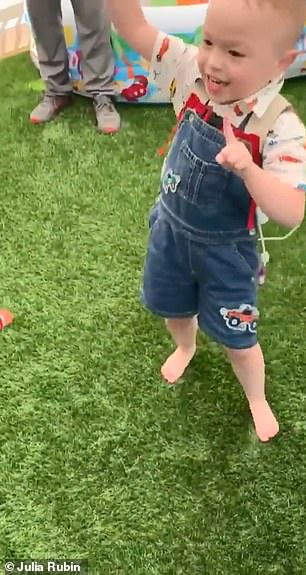 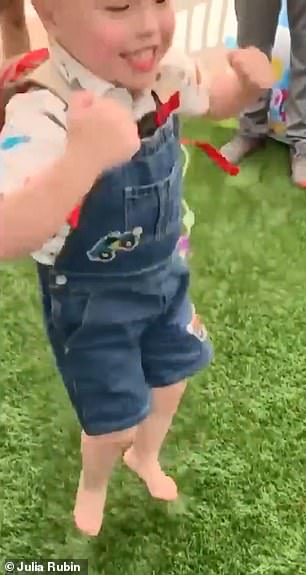 Doctors have told Julia Rubin, Brody’s mother that he may not live long, so she made a wish on his behalf with the Make-A-Wish Foundation. She wished that her son could go outside, so the foundation helped her get a special tent with turf for his birthday. Pictured: Brody ‘outside’

The wish was two years in the making.

But Brody grinned from ear-to-ear when he walked out of his back door to play in the outside world for the first time.

Inside the tent, the family’s deck had been covered with fake grass that was safe for the little by.

Barefoot, he jumped up and down in excitement and splashed around in the water table – the closest he’s come to swimming, since the electronics of his feeding backpack confine Brody to dry land.

‘I’m just really grateful for everybody helping me and helping Brody,’ Julia said.

‘Being a single mom is hard, so I would never be able to do this on my own.’

But with the help of the community, Brody now has his own unique outdoor space to enjoy.