It’s been described as a disease that’s a ‘one way trip downhill’.

But for one brave boy with muscular dystrophy, holographic technology is helping reduce the devastating impacts of the disease.

Harrison Smith, an 11-year-old from Cobham in Surrey, has been able to connect with his much-loved grandfather who lives in a different county using a Hololens mixed reality headset.

Harrison and his beloved grandpa, Andrew Smith, 67, live several counties away and rarely get the opportunity to see each other.

Harrison also struggles to see his other grandfather, who spends six months of the year in Auckland, New Zealand.

Alex Smith, founder of Harrison’s Fund and Harrison’s father, says: ‘Duchenne has no good news stories, it’s a one way trip downhill and with that comes the challenges of just doing normal things with Harrison.

‘We knew there must be a way to help make family time with friends and loved ones a little easier.

‘The meeting of cutting edge technology and family in this way is so very special.’

Harrison Smith, 11, from Surrey suffers from a terminal disease called Duchenne muscular dystrophy which is a debilitating muscle wasting illness. Using technology he was able to see a hologram of his grandpa

He added: ‘I knew that Harrison would love it and my dad would be all over it straight away, he thinks he is god’s gift to technology!

‘We kept it a secret from Harrison all the way.

‘He knew he was going to have some fun with VR tech but didn’t expect to see grandpa. He loved it!’.

DoubleMe, located in London, produced the holographic images using what they say is ‘the world’s first HoloPortal’. 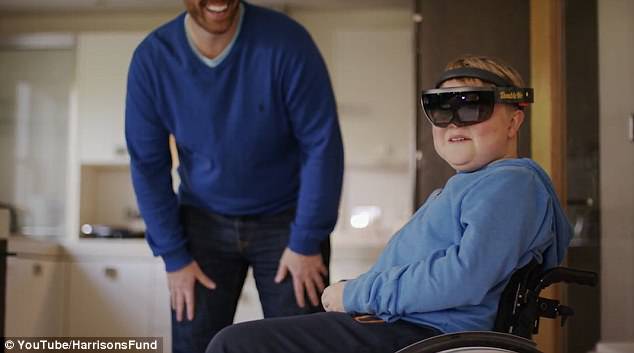 Harrison and his beloved grandpa, Andrew Smith, 67, live several counties away and rarely get the opportunity to see each other

The marriage between the different companies converts 2D videos into 3D and then allows Harrison to see and talk to his Grandpa using the HoloLens headset.

In the HoloPort four sensors combine with five laptops to create and process the imagery.

These 2D images then create a 3D ‘hologram’ which is then transmitted in real-time.

These signals can be picked up via an internet connection and a HoloLens headset.

Whilst this prototype uses mixed reality, there are AR and VR alternatives being developed.

Heart-warming footage shows the technology in action and with the two parties virtually ‘high-fiving’.

The pair first met at Oxford Brookes University where they both attended.

‘Since our time at University we have been close friends and I was well-aware of the story and Harrison’s diagnosis.

‘Recently, I heard about Harrison’s mobility was diminishing quite significantly and that he doesn’t get to see his grandpa. 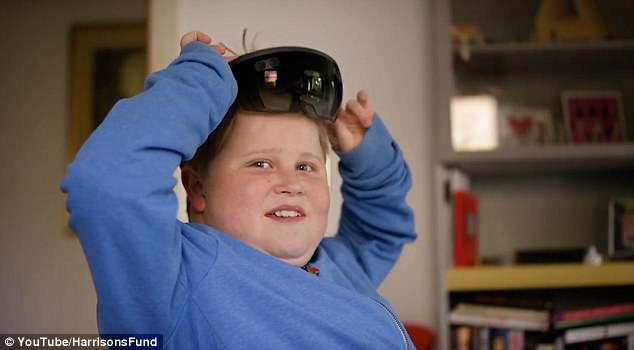 Since being diagnosed with the condition aged only four, Harrison’s condition has deteriorated and his mobility diminished

WHAT IS DUCHENNE MUSCULAR DYSTROPHY?

DMD is caused by an absence of dystrophin, a protein that helps keep muscle cells intact.

The first symptoms are usually seen between three and five years of age and worsen over time.

Life expectancy is usually in the 20s, though more and more sufferers are living into their early 30s.

The disease often occurs in people without a known family history of the condition and primarily affects boys, but in rare cases it can effect girls.

DMD occurs in about one of every 3,500 male infants worldwide.

The disease causes loss of movement, weakness, and eventually death.

The disease is mainly in boys and affects one in 3,500 infants worldwide.

It is a severe type of muscular dystrophy and symptoms usually begin between three and five years old and worsen until a patient can no longer walk and function on their own.

More than 90 per cent of patients are wheelchair-bound by 15.

Duchenne muscular dystrophy is carried on the X chromosome and is a recessive gene.

It occurs almost exclusively in boys as female shave two X chromosomes which greatly reduces the likelihood of the disease.

In boys, only the one gene is needed to produce the illness where as girls would need to have two chromosomes with the faulty gene.

This would only be possible if a male sufferer had a child with a female who was a carrier of the condition.

Women can be a carrier of the illness with no symptoms.

‘We came up with the idea of developing the technology to enable Harrison to experience a connection with his family.

‘We were considering creating the technology ourselves but instead of trying to reinvent the wheel we decided to get DoubleMe involved.’

Duchenne muscular dystrophy (DMD) is an illness which affects 100 new-born boys every year.

With an average life expectancy of 25, sufferers of the disease have progressive loss of muscle function through their pre-teen and adolescent years. 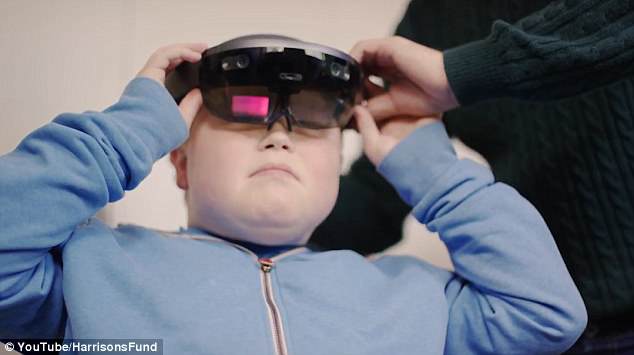 As the degenerative nature of the disease is continuous, the decline in mobility is an ongoing battle. Microsoft Hololens and DoubleMe combined to bring a holograph of Harrison’s grandpa, Andrew, 67, into his living room

Alex Smith told MailOnline that since giving up his job in 2013 to pursue Harrison’s Fund full-time, they have raised over £2.3 million ($3.2 million) to try and cure DMD.

Since being diagnosed with the condition aged only four, Harrison’s condition has since deteriorated.

‘His mobility has been on a steady decline and Harrison is noticing that he can’t do things he used to be able to do.

‘Two years ago he was able to walk but now he is in an electric wheelchair full-time.

‘It makes life more difficult for him and he doesn’t have the ability to do simple things he could do before,’ says his father, Alex Smith. 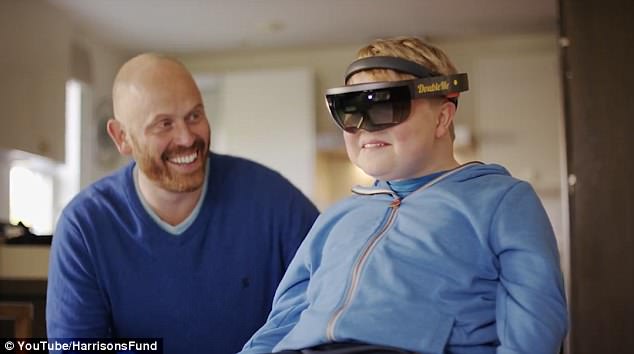 DoubleMe use a ‘blue room’ to scan and recreate 3D images that can be displayed through VR headsets. The HoloPad is located in London and can beam images across the world 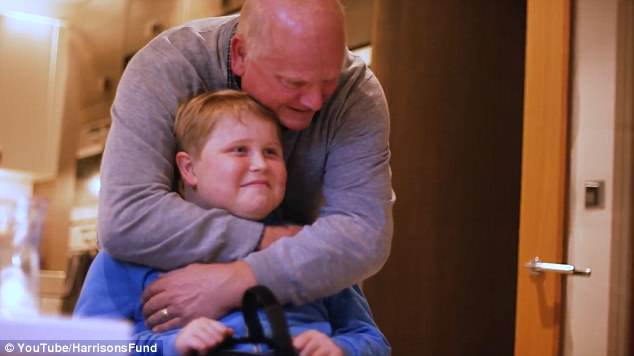 As the degenerative nature of the disease is continuous, the decline in mobility is an ongoing battle.

Since getting an electric wheelchair in September, Harrison has started secondary school.

Despite his physical limitations, he doesn’t let that get in the way of having fun.

‘He has his down days, like everyone, but he’s still a happy chappy and has a smile on his face.’

Few people with DMD live into their thirties, and treatments are being developed regularly.

Harrison has been a participant in a clinical trial at Great Ormond Street Hospital for a number of years. 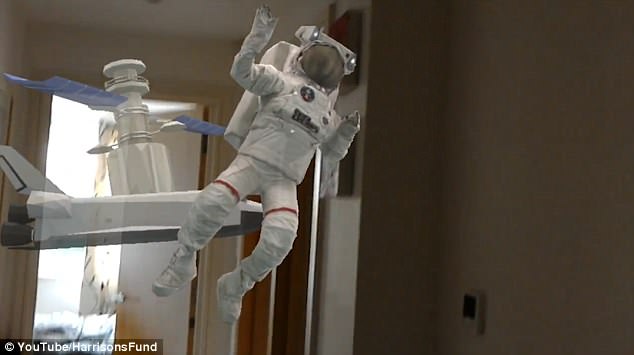 The HoloLens can produce any VR imaging to submerge the user in a different world. The project was organised by Orbital Media. orbital Media CEO, Peter Brady went to university and is long-term friends with Harrison’s dad, Alex 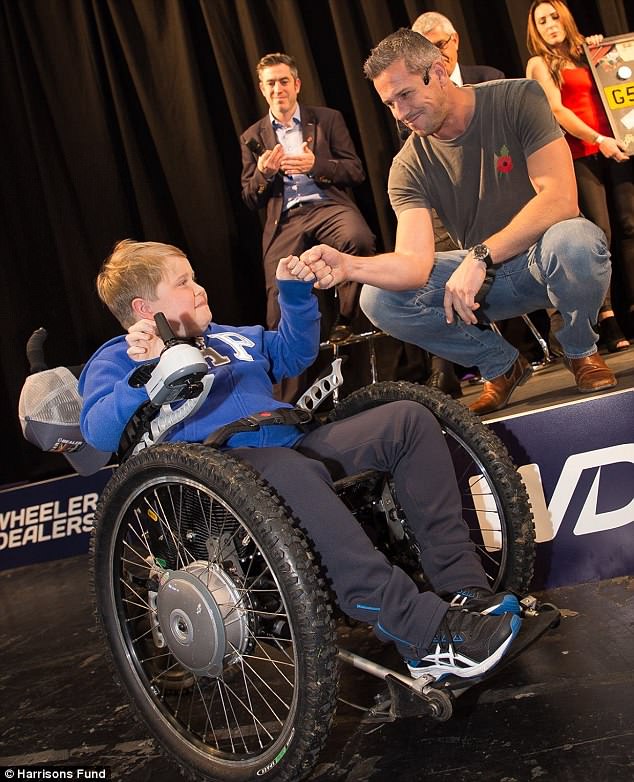 Harrison has been in an electric wheelchair full-time since September. Now at secondary school the youngster is full of happiness and doesn’t let his condition stop him having fun

Whilst the cutting-edge treatment is hoped to slow the disease, Mr Smith is doubtful of its success.

‘I don’t think it’s working. I don’t see any improvement in his condition or any slowing down of the disease.’

‘We haven’t had the discussion about the longer-term implications yet.

‘Harrison tends to shut down when we try and talk about it, he just trusts that his dad is going to sort I think!’

The strain of DMD has affected the Smith family in more ways than one.

Alex and his wife, Donna, had been together since University but have recently separated. 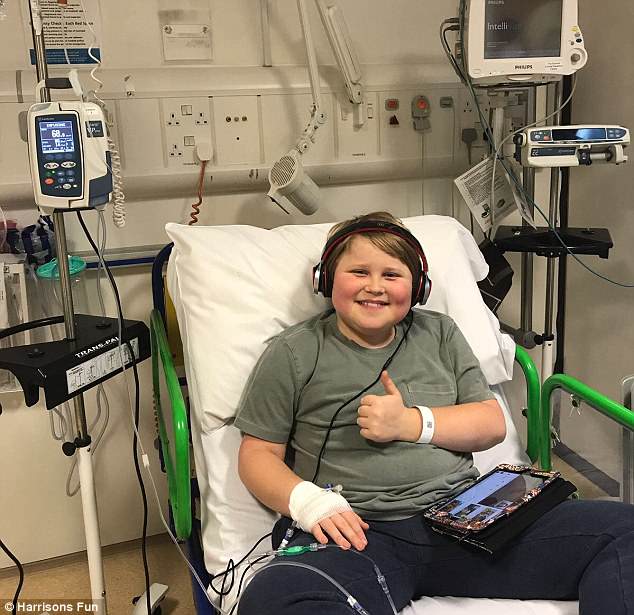 Harrison has been a participant at in a clinical trial at Great Ormond Street Hospital for a number of years. The clinical trials are hoped to slow the progression of his symptoms

Mr Brady of Orital Media saidthat the technology and its future applications are ‘incredible’.

‘The potential for the tech is huge.

‘It could connect people across the world who want to see a baby for the first time or see a relative they haven’t seen in a long time.

‘It may be available, in the future, in mobile phones and is a ready made technology that has mass potential.

‘There is a long way to go with regards to it potential,’ he said.

Donations can be made to support Harrison in his battle against Duchenne muscular dystrophy here. 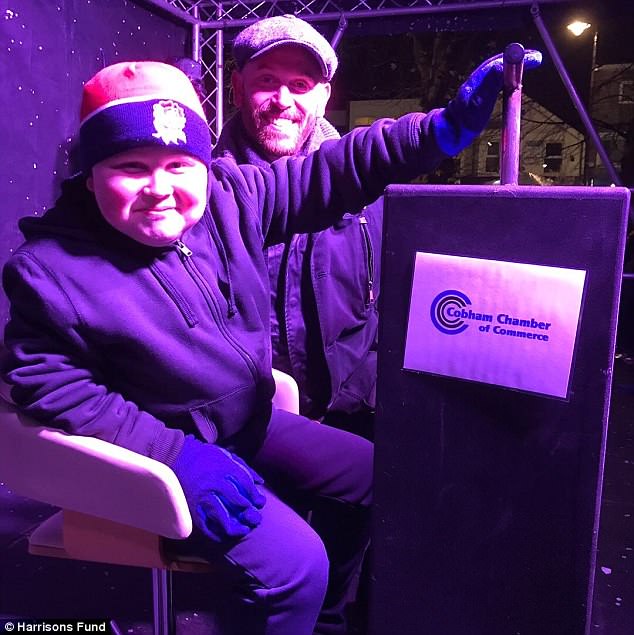 Whilst the battle continues against Duchenne Muscular Dystrophy, Mr Smith hopes that soon this technology will grow and become more accessible