BP will reward investors by splashing more cash on its prize dividend after rising oil prices helped the company return to profit.

The energy giant is going to raise its payout by 4 per cent and buy back a further £1 billion of its own stock by November in an effort to hand as much money as possible to hardpressed shareholders.

They will receive at least £4.4 billion this year – £3 billion through the dividend and another £1.4 billion from buybacks. However, BP also unveiled ambitious £14 billion plans to purchase £1 billion of shares every quarter until 2025.

It swung to a profit of £2 billion in the second quarter, up from an eye-watering loss of £13.5 billion in the same period of 2020. The plunge in oil prices at the start of the pandemic forced the FTSE 100 group to halve its dividend last summer for the first time in a decade.

In the most recent quarter, BP said it had seen a spike in sales of petrol and jet fuel, an indication that travel and daily life are returning to normal. Between April and June this year Brent crude prices averaged $69 a barrel. This compares with a price of less than $30 last year – when strict lockdowns grounded planes, took vehicles off the road and brought many industries to a juddering halt.

Boss Bernard Looney (pictured), who took the helm weeks before Covid brought the world to a standstill, said the rapid rollout of vaccine programmes had given the company the confidence to hike the dividend. 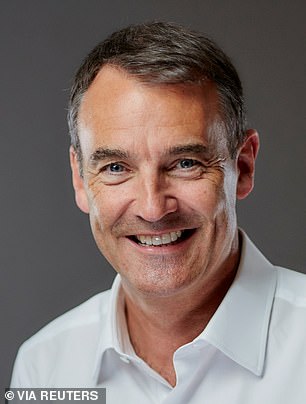 The dividend cut last summer dealt a hammer blow to millions of ordinary Britons as BP is a staple stock for many pension funds and savings accounts, which had already been hit hard by turmoil on the stock market. BP’s announcement yesterday that it could afford to keep increasing the dividend by 4 per cent per year between now and 2025 was a surprise to the City.

It had previously said that it would only be able to hand excess money back to investors through buybacks. Investors cheered the news – with BP shares rising 5.6 per cent, or 16.35p, to 306.1p last night. But some analysts were more sceptical.

Michael Hewson, chief market analyst at CMC Markets, said of the buyback plan: ‘It’s certainly ambitious but it’s easy to make promises. ‘Pretty much all of the profits BP has reported today come from areas they have pledged to cut. The number might add up today, but I don’t see how they will for much longer.’

Looney, 50, unveiled sweeping plans to turn BP into a green energy behemoth when he took over last year. The company has since made major investments in wind and solar energy, including submitting plans to building floating wind farms off the UK coast. But investors worry about the huge costs needed to turn it into a renewables powerhouse at a time when the company is recovering from Covid and oil and gas sales provide its most reliable source of income.

Looney added: ‘Twelve months on from when we laid out our strategy, of course the world’s in a very different place. ‘Global GDP is now back to pre-pandemic levels, the vaccines clearly are working and people are travelling more.’

Russ Mould, investment director at AJ Bell, said: ‘The question of whether the buybacks actually make any lasting difference has to be addressed, especially in light of the argument that BP needs to invest in its core operations. Handing cash back to shareholders does not make BP a better business or company, even if it provides investors with some near-term gratification. ‘Nor does it necessarily help the share price much.’