Brad Pitt’s new space adventure, Ad Astra, is an all too predictable film

From the moment it was premiered at the Venice Film Festival, Brad Pitt’s new space adventure, Ad Astra, has been proclaimed both as towering masterpiece and an over-indulged misfire.

Now that it’s finally released its retrorockets and come in to land in this country, I find myself floating – in a most pe-cu-li-ar way, of course – very much into the latter camp.

My goodness this is hard work. An over-familiar story, a gloomily introspective narration, Pitt being as flat and dull as ever, and the sort of visual effects that make Stanley Kubrick’s 2001: A Space Odyssey – a constant reference point, despite being more than half a century old – look like a work of genius. 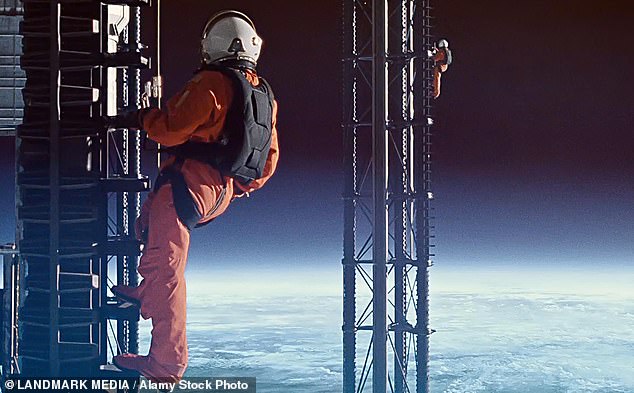 Throw in an almost inexplicable cameo from Donald Sutherland, murderous space monkeys (2001 again?) and the sort of last-second leap on to an already launching space rocket that even Dan Dare would have thought twice about, and you begin to see the scale of the problem.

Actually, Pitt is playing a Major Roy – Major Roy McBride – a career astronaut famous for his reliably low heartbeat (even plunging through the outer reaches of the atmosphere from a collapsing space antenna it never gets above 80bpm) and a commitment to his career that has already cost him his marriage, leaving little for Liv Tyler to do but drift prettily around in unhappy-looking flashback. 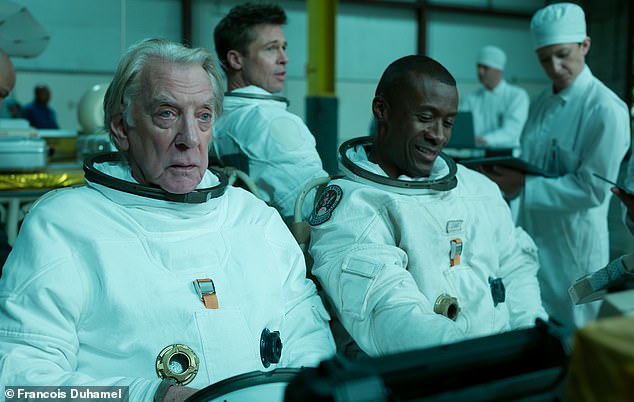 My goodness this is hard work. Throw in an almost inexplicable cameo from Donald Sutherland (above with Sean Blakemore and Pitt), and you begin to see the scale of the problem

Throughout his working life, however, Roy has been haunted by the presence – or to be more precise, absence – of his father, Clifford McBride, a space pioneer who led an early expedition to the outer reaches of the solar system to look for signs of intelligent life, only to disappear in the sort of circumstances that led to him being posthumously declared a hero.

But when Earth starts being hit by devastating electrical pulses and the top brass at SpaceCorp notice that they seem to coincide with huge anti-matter-powered surges emanating from somewhere near the planet Neptune, it seems pretty certain that McBride Snr is still alive. 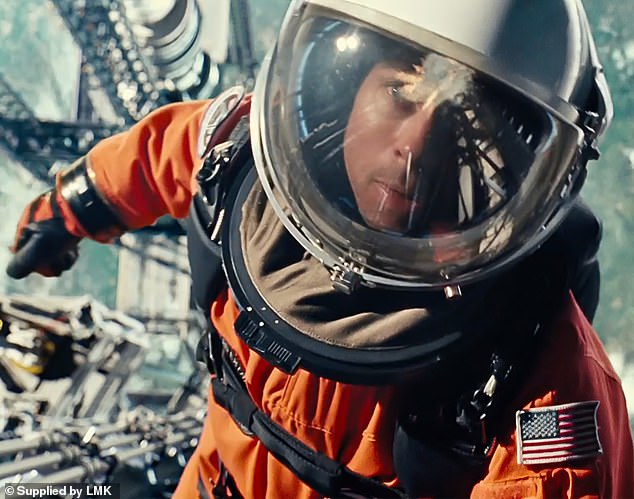 Throughout his working life Roy (above) has been haunted by the presence – or to be more precise, absence – of his father, Clifford McBride, a space pioneer

Anyone getting the feeling that we’re about to leap into the heart of darkness and embark on an outer space version of Apocalypse Now is pretty much spot on, a realisation that comes damagingly early and goes a long way to explaining why the film, directed by festival favourite James Gray, often struggles to hold the interest.

Mind you, that interminable narration, which calls to mind some of the similarly interminable recent films of Terrence Malick, certainly doesn’t help.

Gray’s last film was another endless odyssey, The Lost City Of Z, the deeply disappointing story of the explorer Percy Fawcett that was co-produced by Pitt and featured a crashingly dull central performance from Britain’s answer to Brad, Charlie Hunnam. 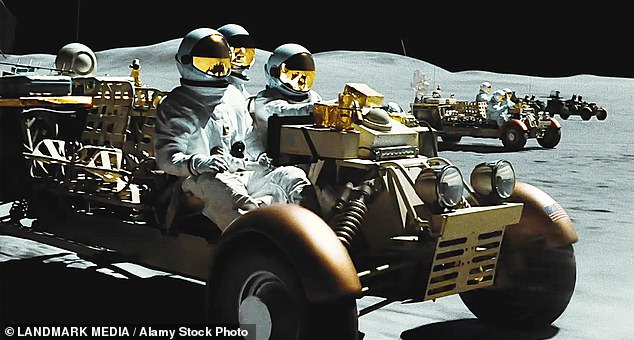 All I can say is that Gray doesn’t seem to have learnt from the experience, making most of the same mistakes all over again.

Co-writing as well as directing, he’s clearly set out to address some big subjects – father-son relationships, existential angst, God delusion, the inherent destructiveness of the human species… along with a big one that I don’t intend to spoil but doesn’t come as nearly enough of a surprise.

He also fails to realise that this sort of thing has been done before, not just by Kubrick and Coppola, the director of Apocalypse Now, but by science-fiction films ranging from John Carpenter’s Dark Star, through Steven Soderbergh’s Solaris (and the Russian original, of course) to Christopher Nolan’s Interstellar.

The underwhelming end result is an all too predictable film that undeniably delivers a bang but also an awful lot of whimper.

Occupying similar ground to Ocean’s 8 and Widows, this is the fashionably female empowered story of what happens when three thugs are sent to jail after an armed robbery goes wrong.

Sounds like promising, if familiar, stuff but everything feels a bit off here, not least when it comes to tone, which is far nastier and more violent than anything we expected. 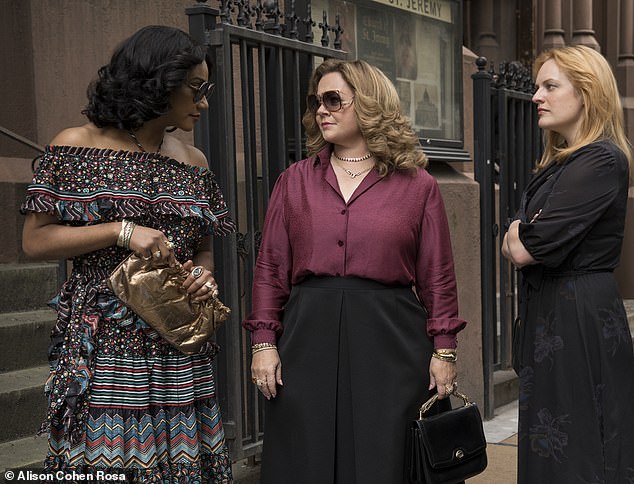 Both McCarthy, a natural comedienne, and Moss seem out of their comfort zones, in a film where if you didn’t know director Andrea Berloff was making her debut you might easily guess.

Based on a comic-book series, it feels formulaic, unconvincing and disappointing.

This arrives in this country with a huge marketing push but, given that it’s played out in Mandarin and based on a Chinese tradition, the question is, why? American-Asian actress Awkwafina plays Billi, who travels to China when her grandmother, Nai Nai, is diagnosed with terminal cancer.

Only no one, including her doctors, has told her that she’s dying. Zhao Shuzhen is excellent as Nai Nai but Awkwafina is decidedly ordinary.