This is the horrific moment a serial mugger repeatedly stamped on the face of a 74-year-old woman in a ‘brutal’ attack before snatching her handbag.

Lee Naylor, 39, of of Great Horton, Bradford, robbed the pensioner just weeks after robbing another victim alongside accomplice Dean Whittaker, 27.

Naylor had previously been given an indefinite sentence for the public’s protection in 2008 due to his repeated targeting of lone women. 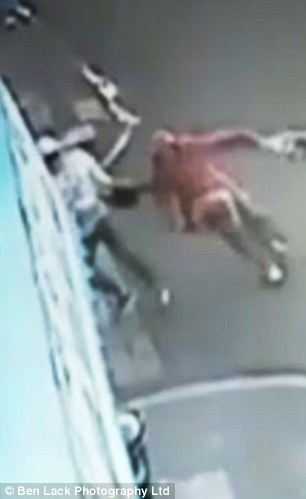 The court heard that on October 2, a 74-year-old woman was walking along Southfield Lane in Great Horton when Naylor grabbed her from behind and dragged her into a side street.

Naylor tried to steal his victim’s handbag, and stamped on her face three times before she released her grip.

CCTV of the horrific attack was shown to the jury. 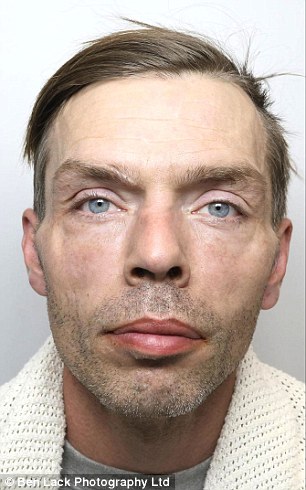 The attack left the victim with swelling and bruises to her face, eye, and lips, but giving evidence to the court, she said she wouldn’t let the robbery traumatise her.

She said: ‘What he did to me, I will not let him affect me. I try and carry on as normal.’

Despite escaping from an open prison on two occasions in 2012 and 2013, the court heard that Naylor was released following a decision by the parole board, in January, last year.

‘She was pulled so hard it is amazing she didn’t suffer serious injury. You stamped on her face three times before you were able to take the bag off her.

‘I’d like to think you were under the influence of something at the time, as the alternative scenario is unimaginable to contemplate.

‘There is no doubt that the harm you intended to cause was significant.’

Prosecutor Chris Smith said that Naylor was still on-licence when he and Whittaker followed a woman back from work to her home in Wibsey, Bradford, West Yorks, on September 21.

Bradford Crown Court heard that Naylor acted as driver while Whittaker confronted their victim in her garden, stealing her handbag. The court heard that on October 2, a 74 year-old woman was walking along Southfield Lane in Great Horton when Naylor grabbed her from behind and dragged her into a side street

The bag was later burnt, and the victim’s purse, which contained sentimental family pictures, was never recovered. Within ten minutes of the robbery, Whittaker tried to use one of her bank cards to pay for goods and withdraw cash, but it was declined.

In a victim impact statement, she said ‘there weren’t words to describe how angry she was’ after the incident.

She said: ‘I am disgusted that someone would cruise the area looking for a victim. I will still walk home, but I will look over my shoulder for anyone who thinks that robbing a lone woman and threatening her with violence is reasonable, because it isn’t.’

The court heard that both defendants had long-standing addictions to class A drugs. 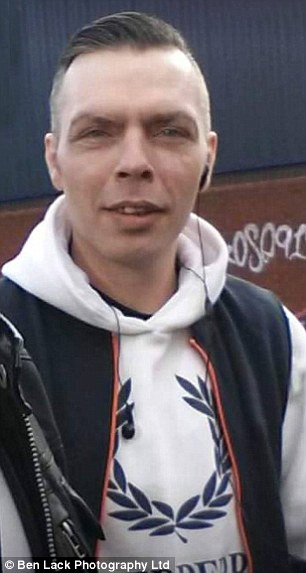 Naylor, of Great Horton, Bradford, was convicted of two offences of robbery and two of driving while disqualified

Naylor, of Great Horton, Bradford, was convicted of two offences of robbery and two of driving while disqualified.

Whittaker, of Allerton, Bradford, was convicted of robbery and fraud.

Sentencing the latter to six years in prison, Judge Colin Burn told Whittaker he had played the leading role in robbing the first woman.

He said the attack had left the victim feeling ‘incandescent anger’, causing her and a friend to check and send CCTV footage of the incident to police to aid in the capture of the robbers.

Judge Burn told Whittaker: ‘This is not any mitigation to you, it just demonstrates that you picked on the wrong person.’

Turning to Naylor, Judge Burn told the defendant he had already been judged a dangerous offender by the Bradford courts, resulting in his imprisonment for public protection in 2008.

The court heard that those offences involved the robbing of women aged 83 and 60, with Naylor committing similar offences in 1997 and also 2002.

Judge Burn told Naylor that his sentence was one of 14 years, but added that as he had previously presented as a dangerous offender, it was ‘unarguable’ that he should pass a discretionary life sentence, meaning the defendant will not be eligible to be considered for parole for at least seven years.

Speaking after the sentence, one of the victims said of Naylor: ‘He is a danger. If they let him appeal after seven years, I hope he doesn’t get it. He could have quite easily killed her (the other victim).’

Detective Constable Priscilla Haigh of Bradford District CID, said: ‘The level of violence used by Naylor in the Southfield Lane robbery was shocking and even more despicable considering his victim’s age and vulnerability.

‘Both he and Whittaker are clearly dangerous men and the public should feel safer knowing that they have been given significant jail terms.’