During the opening of the Monday morning radio interview, Brady, 41, made it clear the topic of Guerrero wasn’t one he planned to discuss. When WEEI co-host Kirk Minihane went back to that well a fifth time without shifting gears, Brady responded by signing off.

Specifically, Minihane asked about Guerrero’s presence on a recent team flight – something that had been a point of contention last season when Patriots head coach Bill Belichick banned Brady’s trainer from the team plane and the sideline as ESPN was reporting a quarterback-coach rift within the perennial contender’s locker room. Guerrero’s Gillette Stadium office was also taken away, according to multiple reports. 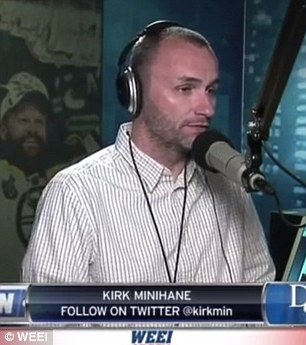 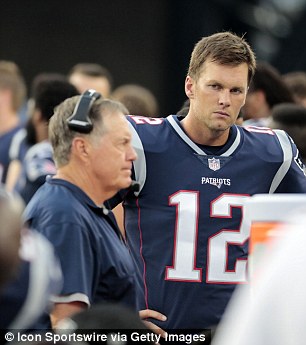 During the opening of the Monday morning radio interview, Brady (far right) made it clear the topic of Guerrero wasn’t one he planned to discuss. When WEEI co-host Kirk Minihane (left) went back to that well a fifth time without shifting gears, Brady responded by signing off. Belichick (near right) banned Guerrero from the team plane last year, but the trainer was back on the sidelines during a preseason game against Carolina on Saturday

Boston Magazine previously referred to Guerrero as a snake oil salesman after he falsely claimed to be a doctor and insisted his products could cure cancer and concussions, according to the Federal Trade Commission.

Minihane asked Monday whether the Belichick’s policy regarding Guerrero had changed.

Minihane followed up ‘OK, when I ran into him at the Super Bowl last year in Minneapolis, I remember talking about it at the time. When I talked to him there, he had said, in his opinion, all this stuff had been overblown, that he and Belichick had a pretty good relationship, even then. Would you say that was true?’

Brady said, ‘I said I don’t want to get into it. … Yeah, everyone knows, it’s well documented the work he and I do together.’

Then Minihane asked if Guerrero was on the sideline for the Patriots-Panthers game last week.

‘Yeah, all right guys, have a great day. I’ll talk to you later.’

During training camp, Brady halted an interview on the sideline over questions implying Guerrero was connected to wide receiver Julian Edelman during the period in which Edelman allegedly violated NFL rules prohibiting performance-enhancing drugs. Edelman is suspended for the first four games of the regular season. 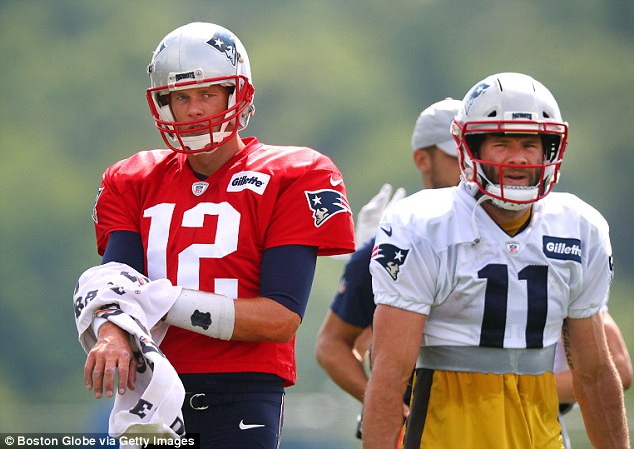 During training camp, Brady halted an interview on the sideline over questions implying Guerrero was connected to wide receiver Julian Edelman during the period in which Edelman (right) allegedly violated NFL rules prohibiting performance-enhancing drugs

Brady’s relationship with Guerrero came to light in Brady’s book, ‘TB12 Method,’ which included joint marketing efforts for the two. Guerrero’s main office is located near the Patriots’ facility in Foxborough, Massachusetts and he also deals with several of Brady’s teammates, such as tight end Rob Gronkowski and wide receiver Julian Edelman, who is currently facing a four-game suspension for violating the league’s policy on performance-enhancing drugs.

Kirk Minihane: What changed in him not being on the team plane last year and this year? Was that just communication back and forth, or was that an understanding of other things? What led that to being able to happen this year?

Brady: ‘Yeah, I am not getting into all that.’

Minihane: OK, when I ran into him at the Super Bowl last year in Minneapolis, I remember talking to him at the time — when I talked to him there, he had said in his opinion that all this stuff had been overblown, and he and [Bill] Belichick had a pretty good relationship even then. Would you say that is true?

Brady: ‘I said I don’t want to get into it. … Everyone knows, it is well-documented the work he and I do together.’

Minihane: ‘I understand that. I am just trying to figure out because I saw the reports this weekend that he’s traveling with the team. Was he on the sideline Friday?’

In January Brady ended his weekly spot on WEEI before it began after one co-host referred to his five-year-old daughter as ‘an annoying little pissant.’

Guerrero has worked with Brady on the five-time Super Bowl champion’s TB12 brand, which includes a book and phone app, both of which provide health tips. Together they opened the TB12 Therapy Center across the parking lot from the Patriots’ Gillette Stadium in 2013.

Guerrero first began working with Brady in 2004 after previously training legendary Patriots edge rusher Willie McGinest. It wasn’t until 2014, according to the ESPN report, that tensions began to arise between Guerrero and the Patriots’ training staff.

In 2015, the Globe reported that Patriots medical and training staffs had complained to Belichick about Guerrero’s role, citing concerns over alternative treatments that often conflicted with their own methods. Guerrero’s medical background was also reportedly questioned.

And since Guerrero was equally critical of the Patriots’ staff, young players were put in the position of working with him, and appeasing Brady, or the team’s staff, which was Belichick’s clear preference.

‘Bill’s answer to everything is to lift more weights,’ Brady would reportedly tell teammates.

Some around the team reportedly felt that characterization was inaccurate given Belichick’s focus on soft-tissue science and its effect on injuries as well as a proper diet.

Another issue was the claims Brady and Guerrero were making through their TB12 brand.

‘When athletes get injured, they shouldn’t blame their sport,’ Brady wrote in the TB12 Method.

According to ESPN, Guerrero’s techniques helped some players, but others felt like ‘it was a cult,’ which is why some blame Brady for the problems in New England. 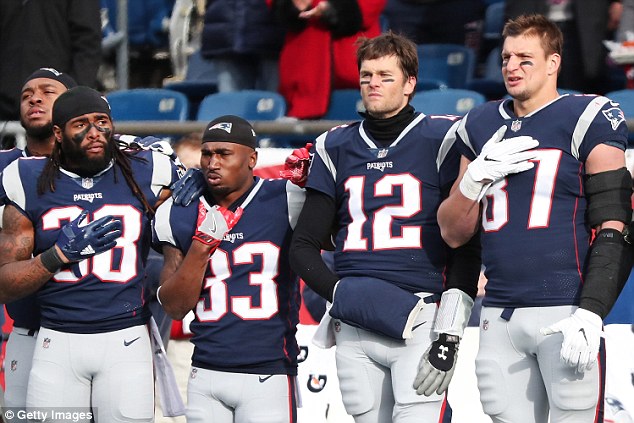 ‘Tom changed,’ a friend of Brady’s told ESPN. ‘That’s where a lot of these problems started.’

According to federal affidavits, Guerrero claimed to have made a nutritional supplement that cured terminally ill patients affected with cancer, AIDS, multiple sclerosis, and Parkinson’s disease.

The product, called Supreme Greens, was purported to have cured all but eight of the 200 terminally ill patients that were part of the study.

‘This is just out and out quackery,’ says Barrie Cassileth, who has a PhD in medical sociology and the founder of the Integrative Medicine Service at the Memorial Sloan Kettering Cancer Center, told Boston Magazine.

The report revealed that Supreme Greens were never actually tested and the supposed study never existed, as he later admitted.

According to Boston Magazine, Guerrero was told by the FTC to stop referring to himself as a doctor. The publication also revealed that Guerrero’s degree in Chinese medicine came from a California college that no longer exists.

Brady’s claims in his book, ‘The TB12 Method,’ are also questionable. 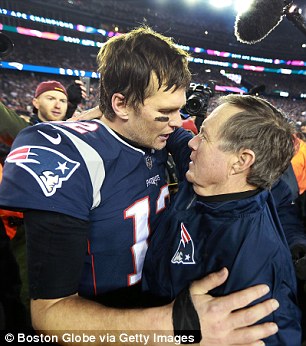 Tom Brady and Bill Belichick have won five Super Bowls together, but their relationship has not always been an easy one, according to reports. Belichick has feuded with Brady over the latter’s trainer, Alex Guerrero

The Patriots franchise quarterback insisted that despite being fair skinned, he stopped getting sunburns once he got in the habit of hydrating himself with nearly 300 ounces of water a day.

‘When I was growing up, and playing outside in the sun, I got sunburned a lot,’ Brady wrote in the 300-page book. ‘I was a fair-skinned Irish boy, after all. These days, even if I get an adequate amount of sun, I won’t get a sunburn, which I credit to the amount of water I drink. I always hydrate afterward, too, to keep my skin from peeling.

‘When I once told that to my sister,’ the book continues, ‘she said, ‘You mean I don’t have to use all those moisturizers and facial products to keep my skin looking good? I should just drink as much water as you do? I think you should market your [stupid water drop things] as a beauty product.’ I just laughed.’

Those ‘stupid water drop things’ are Brady’s ‘TB12 electrolyte drops,’ which he encourages readers to use in their water. In fact, much of Brady’s book references his own line of health products.

According to a description of the book on Amazon, Brady ‘explains how he developed his groundbreaking approach to long-term fitness, presenting a comprehensive, step-by-step guide to his personal practice. Brady offers the principles behind pliability, which is at the heart of a new paradigm shift and movement toward a more natural, healthier way of exercising, training, and living—and one that challenges some commonly held assumptions around health and wellness.’

The description continues, ‘The TB12 Method is the only book an athlete will ever need, a playbook from Brady himself that will change the game.’ 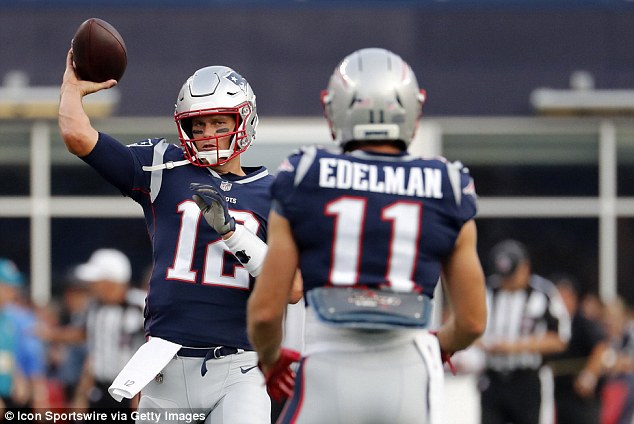 Patriots quarterback Tom Brady, 41, is preparing for his 19th pro season – 18th as a starter