Scientists have developed a brain implant that can deliver chemotherapy directly to brain tumors without side-effects — in a potential breakthrough.

Brain cancer is one of the deadliest forms of the disease because current treatments are not targeted enough to attack the tumor without killing healthy neurons.

Chemotherapy also has trouble penetrating the brain because of its natural defense system, known as the brain-blood barrier.

Now a team at Columbia University, in New York City, developed a device that can pass straight through and transmit chemo drugs directly into the brain tumor.

It was tested on five patients with glioblastoma, one of the deadliest forms of brain cancer that kills most patients within two years of a diagnosis.

Participants suffered no side-effects and could not tell when the pump was releasing the drug and when it was switched off.

While the medication did not cure the patients – all five died around 12 months into the study – effectively delivering cancer drugs to the brain without side-effects is a major breakthrough.

Dr Jeffrey Bruce, a neurologist at Columbia, said: ‘This new approach has the potential to transform treatment for patients with brain cancer, where the outlook for survival remains very poor, though more testing is needed in patients with earlier-stage tumors and with different types of chemotherapy.’

He continued that delivering the drug by this method made it 1,000 times stronger than typical chemo treatments. 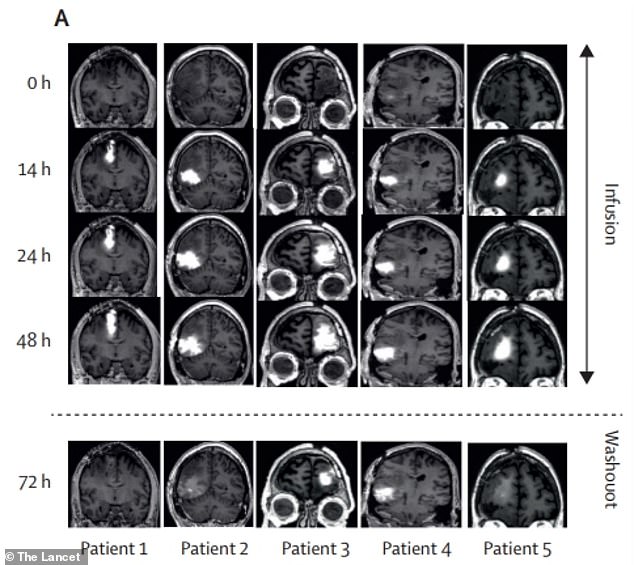 Researchers found that the brain tumors were being saturated with the drug after only 48 hours of delivery. This shows that the device could successfully deliver the medication 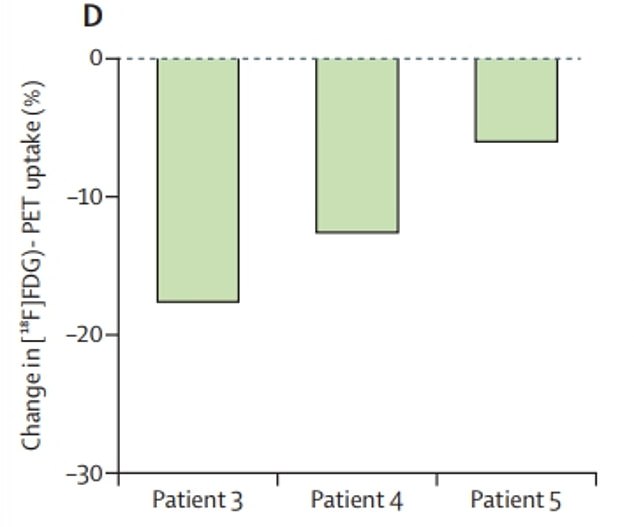 In the final three patients, researchers found significant decreases in the proliferation of tumor cells after the four weeks of treatment

People with glioblastoma rarely live longer than two years. It occurs when the brains nerve cells begin to uncontrollably divide.

The brain’s blood barrier is a final line of protection for the body’s most important organ.

While it prevents viruses and bacteria from reaching the brain, it can stop medicine as well.

Glioblastoma, the rare and aggressive brain cancer that has just a 40 percent one-year survive rate

Glioblastoma, or glioblastoma multiforme, is an aggressive type of brain cancer.

It develops when cells supporting nerves in the brain begin to divide uncontrollably.

These fast-growing cells invade nearby brain tissue, making them hard to remove, but generally do not spread to other areas of the body.

Survival rates are poor, with less than half of patients surviving more than a year after diagnosis.

About one in 30,000 people have the condition, estimates suggest.

Warning signs vary depending on where the cancer is in the brain. They include:

How is it diagnosed?

Brain scans are used to detect the cancer.

Glioblastoma is a stage IV type of brain cancer, meaning it is fast-growing.

Can it be treated?

Surgery is the main treatment for this brain cancer.

Specialist doctors remove as much of the cancer as possible during the operation. They may suggest patients stay awake during the procedure.

After surgery, some patients are offered chemotherapy for several months.

What are the survival rates?

About 40 percent of patients survive beyond a year after being diagnosed, the American Association of Neurological Surgeons says.

Experts warn it can lead to death within six months if left untreated.

This cancer is most commonly diagnosed in men around 64 years old, although it can occur in people of all genders and age groups.

Prior therapeutic radiation and an impaired immune response are also risk factors for the condition.

Current brain cancer treatments usually first include surgery before round of chemotherapy. Doses of the drug needed to have effect on the brain are often so large it causes issue elsewhere in the body.

Surgeons will attempt to remove as much of the tumor as they can. Drugs will then help combat the remaining cancer cells in the brain.

Around 90,000 Americans are diagnosed with a brain tumor each year. The conditions cause over 18,000 annual deaths.

Scientists, who published their research in The Lancet Oncology last month, had been working of the development of an implantable cancer device for years.

Dr Bruce said his team had previously developed a pump that would attach to the tumor through the skull – from outside the body.

Because the pump had external parts, patients would often suffer an infection within days and needed to be hospitalized while receiving medicine.

The team instead worked towards developing an implant with totally internal parts that would not need replacement.

The newly-developed device, which is as wide as a credit card is placed in the abdomen.

It is then connected to catheters underneath the skin that link it directly to brain tumor tissue.

The end of the catheter is placed between the tumor and an incision made by a surgeon that will help remove it later.

It then slowly delivers medication directly to the tumor.

The drugs damage the nucleus of the quickly-growing cells, and cuts of its ability to proliferate.

‘If you pump in the drug very slowly, literally at several drops an hour, it penetrates into the brain tissue,’ Dr Bruce said.

‘The drug concentration that ends up in the brain is 1,000-fold greater than anything you are likely to get with intravenous or oral delivery.’

The device was first tested in animals, before getting the go-ahead for human trials.

Five patients were chosen for the first trial. Each was suffering from glioblastoma but were determined to be in relatively good condition.

Four of the patients were between 51 and 61 years old. One was aged 34. Each had to pass an examination determining that their cancer was in stable condition.

Patients were all implanted with the pump, which was filled with topotecan.

The drug is designed to treat cervix, lung and ovary cancer, but Dr Bruce is hopeful it is effective against brain tumors as well.

‘The pump can stay in place for a long period of time, so we can give higher doses of chemotherapy directly to the brain without causing the side effects that we get with oral or intravenous chemotherapy,’ he explained.

Each patient received treatment for four weeks. For two days, 200microliters were applied directly to the tumor. Then there were five days in between without medication.

After a month, patients had the device removed and a sample of tumor tissue was extracted by researchers.

They found that the proliferation of  tumor cells had significantly reduced in each patient.

The treatment had also saturated the tumors with medication, showing effective delivery of the medication.

None of the patients could beat their cancer, though. All five have died since the study took place in 2018, living around 12 months each since receiving the implant.

It highlights how ferocious these brain cancers can be – and why treatment like this is is such high demand.

There are little available treatments for the disease and the field of research has not moved forward much in recent decades.

Patients did not suffer any major negative side-effects from the pump itself, giving researchers hope that it is safe to use.

They are already planning future studies to investigate if it can improve survival of glioblastoma patients.

‘A lot has already happened to make the tumor harder to treat by the time initial therapies fail, so we think that the pump will work even better with the newly diagnosed patients,’ Dr Bruce says.

‘This approach would give us the ability to change the treatment over time and consider using other types of chemotherapy that would not be effective if given systemically but may be much more effective when delivered directly to the brain.’