Brain cells’ slow ability to clean themselves may be what causes Alzheimer’s, study finds

The origin of Alzheimer’s disease has baffled scientists for more than a century, but new research claims to have found the culprit – it could be caused by cells’ slowing ability to clean themselves.

Researchers from the University of California, Riverside (UCR) suggests the slowing is seen in people over the age of 65 – the prime age for diagnosis- and is what likely causes the unhealthy brain buildup.

The slowing, known as autophagy, can be induced by fasting, as cells do not get enough protein from an individual’s diet – and they fill the void by recycling proteins already present in cells.

UCR Chemistry Professor Ryan Julian, who led the study, says drugs are already being tested to improve autophagy and if this is the cause of Alzheimer’s we could see a potential preventive drug in the near future.

‘If a slowdown in autophagy is the underlying cause, things that increase it should have the beneficial, opposite effect,’ Julian said.

The origin of Alzheimer’s disease has baffled scientists for more than a century, but new research claims to have found the culprit – it could be caused by cells’ slowing ability to clean themselves

Around 6.2 million Americans are living with Alzheimer’s disease as of this year, with more than one in nine age 65 or older.

The disease was discovered by Dr Alios Alzheimer in 1906, who noticed changes in the brain tissue of a woman who had died of an unusual mental illness – and how it comes about has since remained a mystery.

Doctors typically diagnose Alzheimer’s when they find a combination of amyloid plaques and neurofibrillary tangles, coupled with dimension.

However, Julian said in a statement: ‘Roughly 20% of people have the plaques, but no signs of dementia.

‘This makes it seem as though the plaques themselves are not the cause.’ 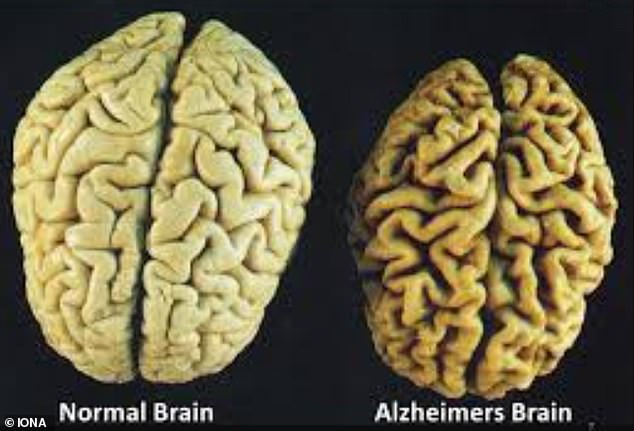 The slowing, known as autophagy, can be induced by fasting, as cells do not get enough protein from an individual’s diet – and they fill the void by recycling proteins already present in cells

Now, Julian and his colleagues believe they have cracked to code of the disease by looking at proteins inside the brain.

The abnormal build-up is known to cause Alzheimer’s, which involves two types of proteins.

The team began the study by focusing on tau proteins, which are found to be misfolded and abnormally shaped in brains of people with Alzheimer’s.

Although difficult to detect, the different form of tau allowed the scientists to distinguish between people who expressed no outward signs of dementia from those who did.

Julian’s lab at the university focuses on the different forms that a single molecule can take, called isomers, which also helped lead them to the culprit.

‘An isomer is the same molecule with a different three-dimensional orientation than the original,’ Julian said.

‘A common example would be hands. Hands are isomers of each other, mirror images but not exact copies. Isomers can actually have a handedness.’

The amino acids that make up proteins can either be right-handed or left-handed isomers.

Normally, Julian said, proteins in living things are made from all left-handed amino acids.

With all of this in mind, the team scanned all the proteins in donated brain samples.

The found those with brain buildup but no dementia had normal tau while a different-handed form of tau was found in those who developed plaques or tangles as well as dementia.

Most proteins in the body have a half-life of less than 48 hours, but if they are found to linger, certain amino acids can convert into the other-handed isomer.