The parents of Alfie Evans have said they are ‘heartbroken’ after their son died on Saturday morning.

The 23-month-old – who was being treated at Alder Hey Children’s Hospital in Liverpool – died at 2.30am, Kate James and Thomas Evans said on Facebook.

The youngster was at the centre of a legal battle over his treatment that touched hearts around the world.

The post on said: ‘Our baby boy grew his wings tonight at 2:30 am. We are heart broken. Thankyou everyone for all your support.’

Mr Evans, 21 and Ms James, 20, had fought to take their son to a foreign hospital for treatment for a degenerative medical condition, but lost a final court appeal on Wednesday.

Doctors had removed Alfie’s life-support following a High Court judge’s ruling on Monday, however he continued to live.

Now, it heart-rending pictures, we look back on the brave toddler’s life from the beginning.

May 9 2016: Alfie Evans is born in Liverpool to parents Tom Evans and Kate James, now aged 21 and 20 respectively 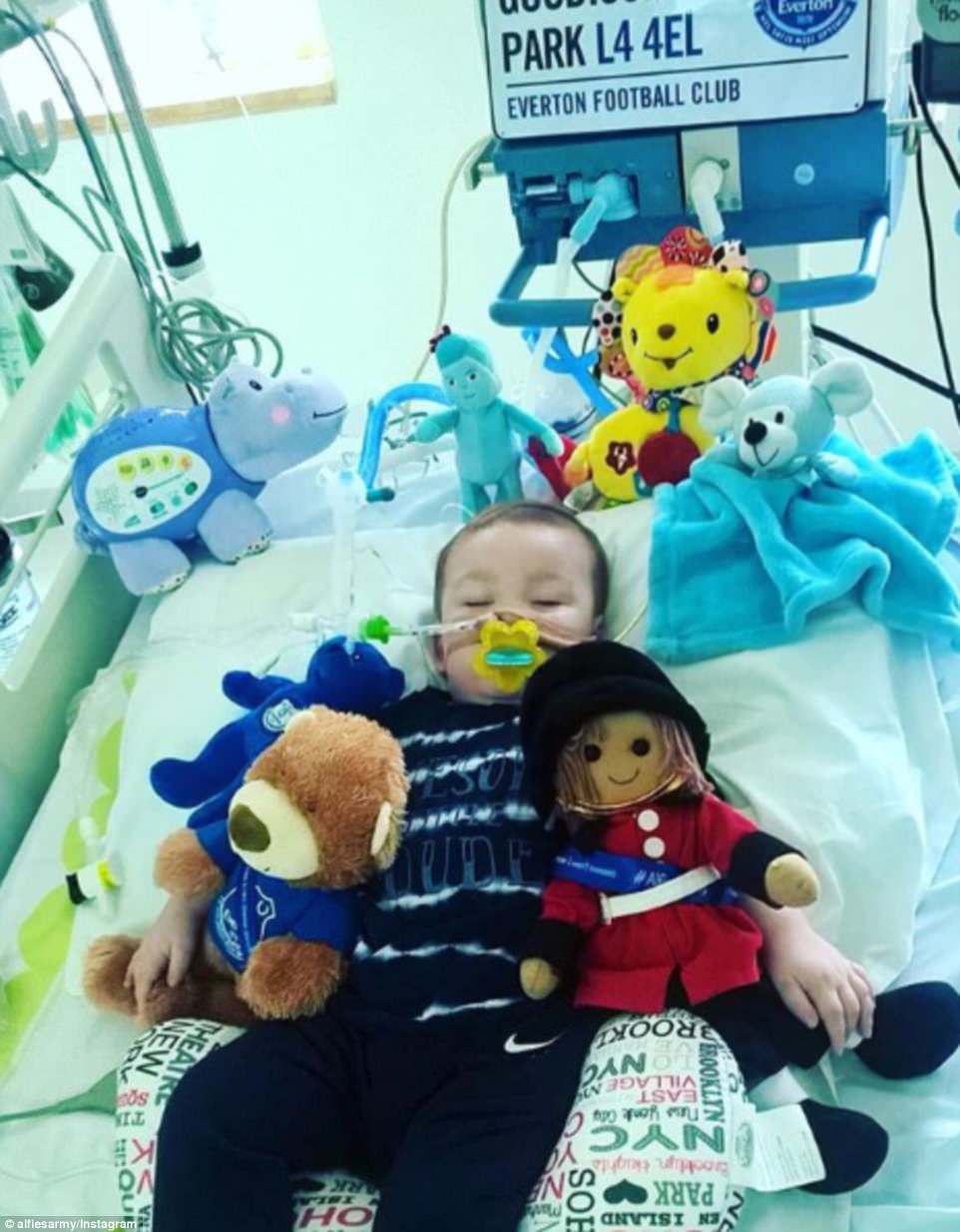 July 11 2017: Alfie pictured in hospital after a kidney scan, with the caption ‘Our little buddie doing good today had a kidney scan and Drs said looks fine’ 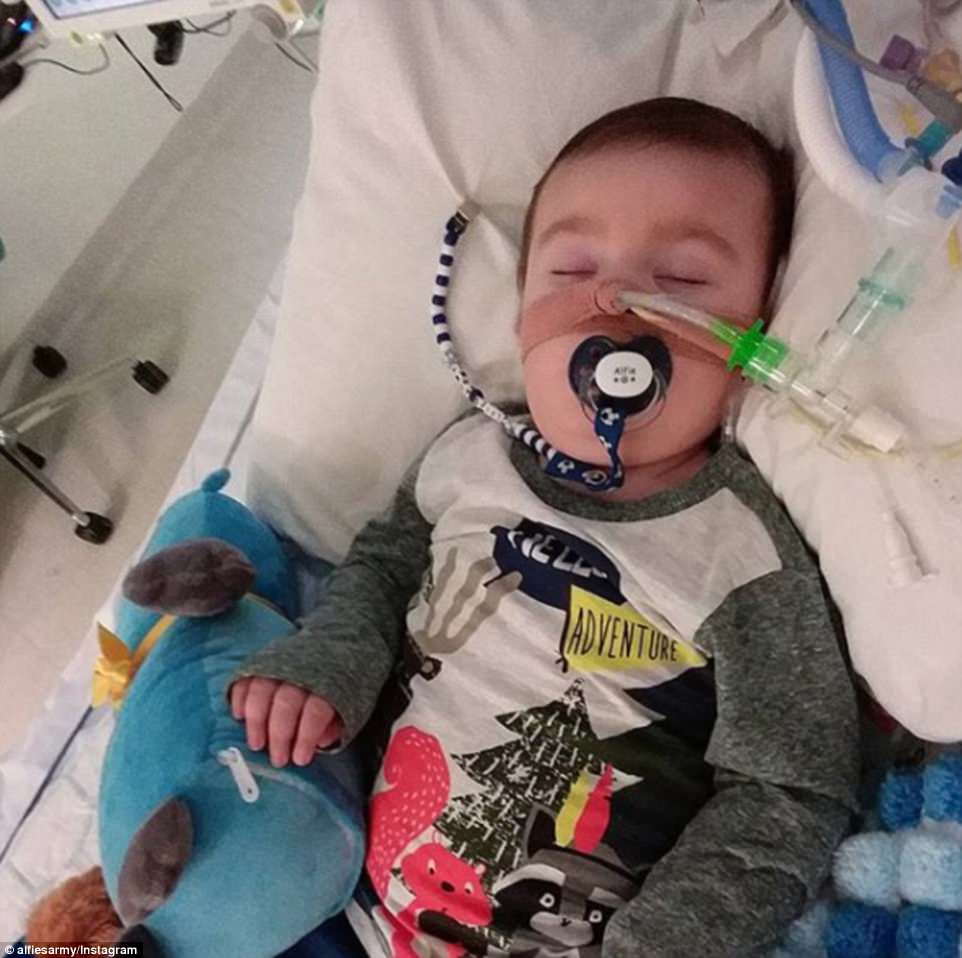 December 5 2017: Alfie recovering from his chest infection. The news is released days later that Alder Hey hospital refused our request to allow Alfie to a European children’s hospital 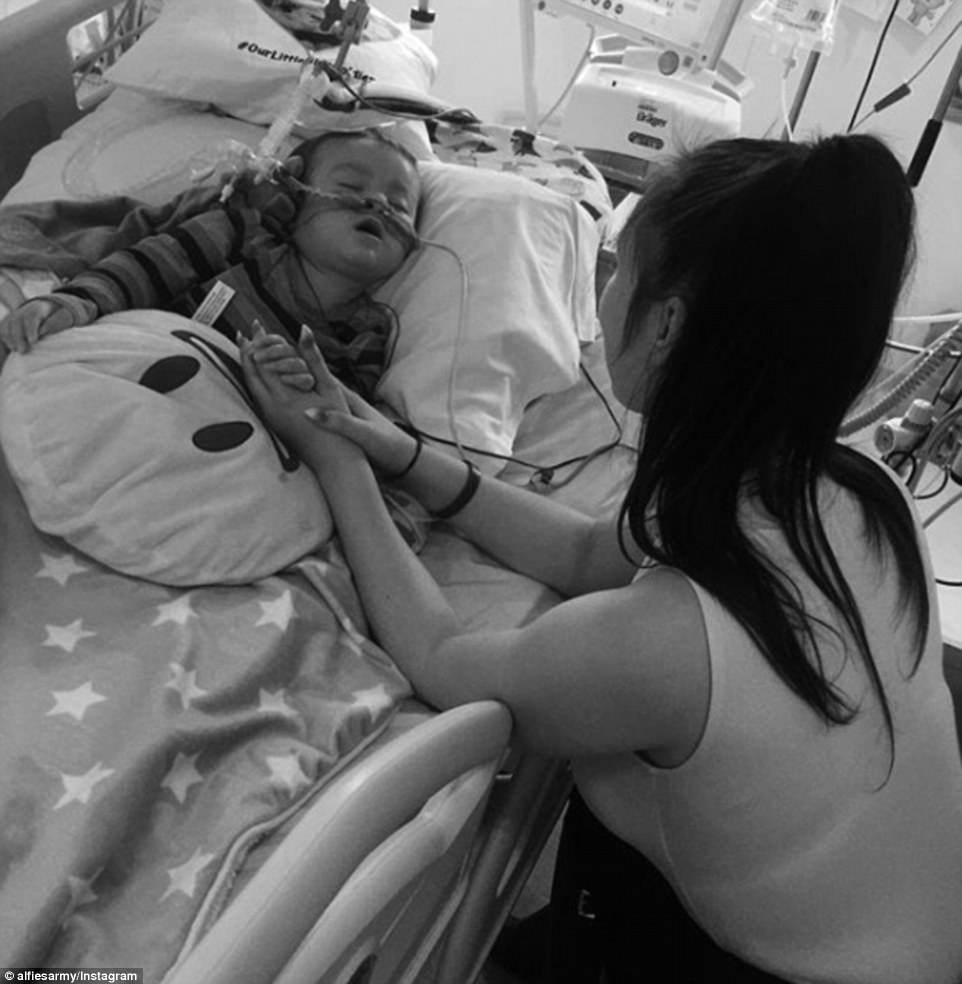 December 14 2017: This picture of Alfie in hospital it shared just days before court proceedings begin, with the caption ‘I have seen, what they refuse to see. I have seen more in just my first time seeing Alfie, what they have refused to see for a year’ 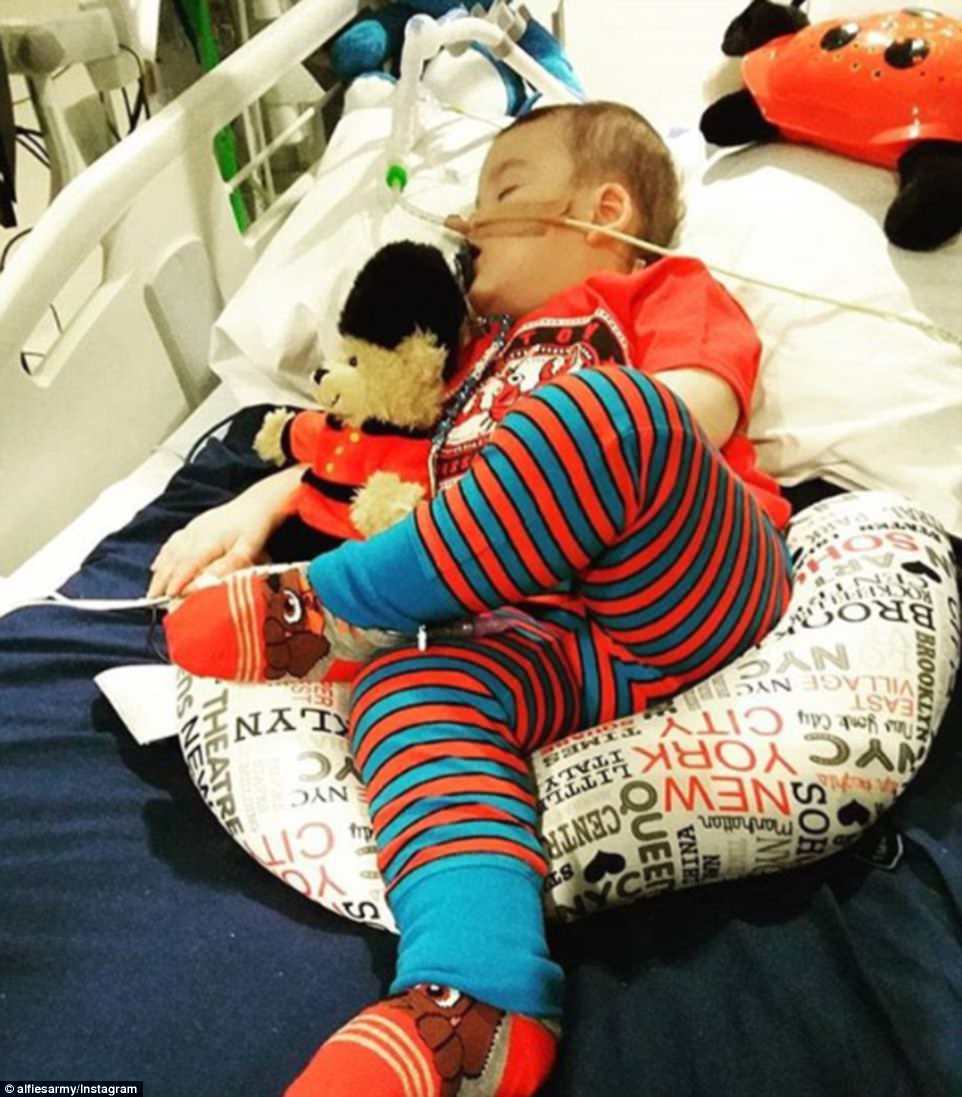 December 20 2017: Alfie one day after court hearing starts. The hospital says continuing life-support treatment would not be in Alfie’s best interests, but his parents disagree and say they want permission to fly him to Italy for treatment. The judge says he will make a decision on what is best for Alfie 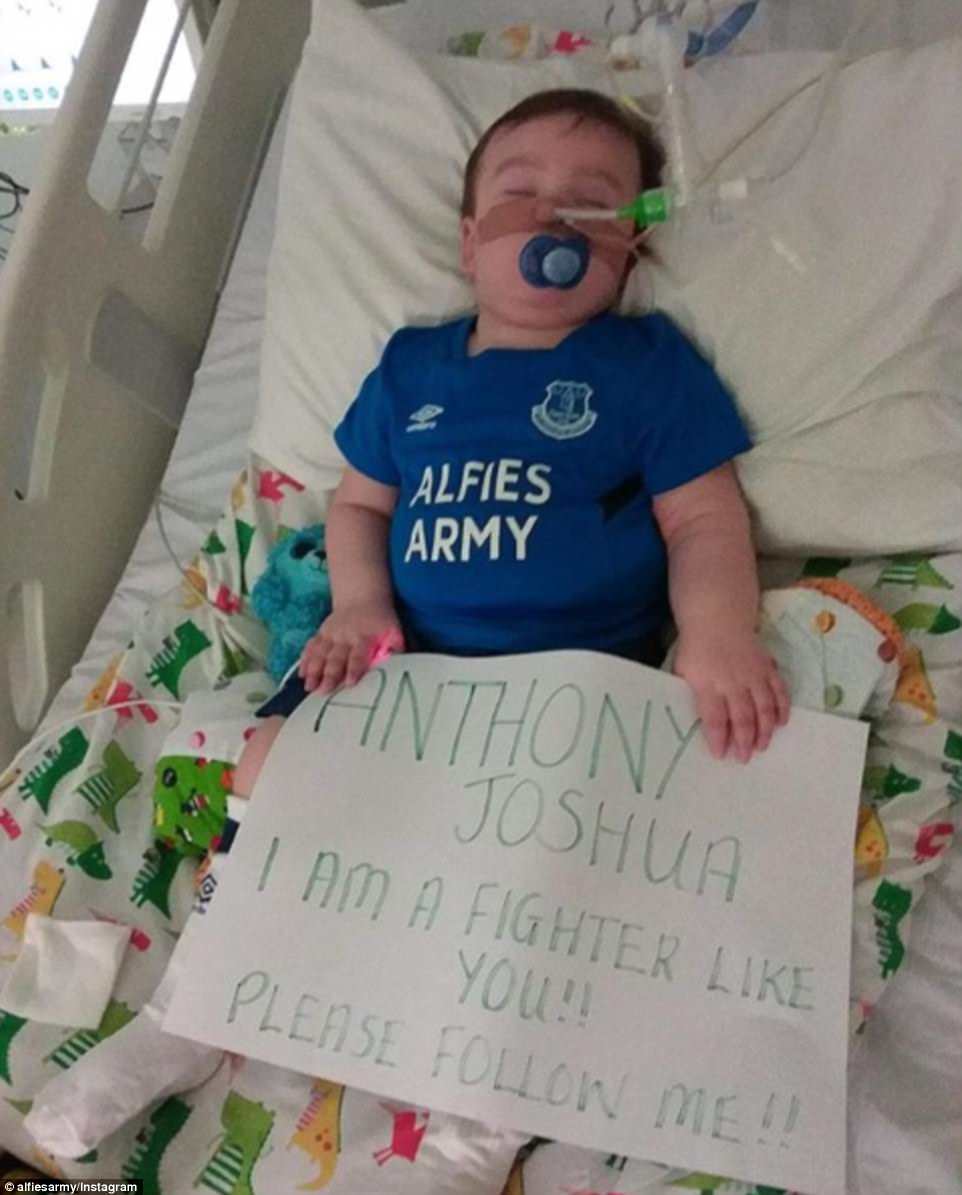 February 2 2018: One of Alfie’s doctors tells the judge there is “no hope” for the youngster, who is in a semi-vegetative state from a degenerative neurological condition doctors have not been able to definitively identify. This picture calling for Anthony Joshua’s help is shared on Instagram 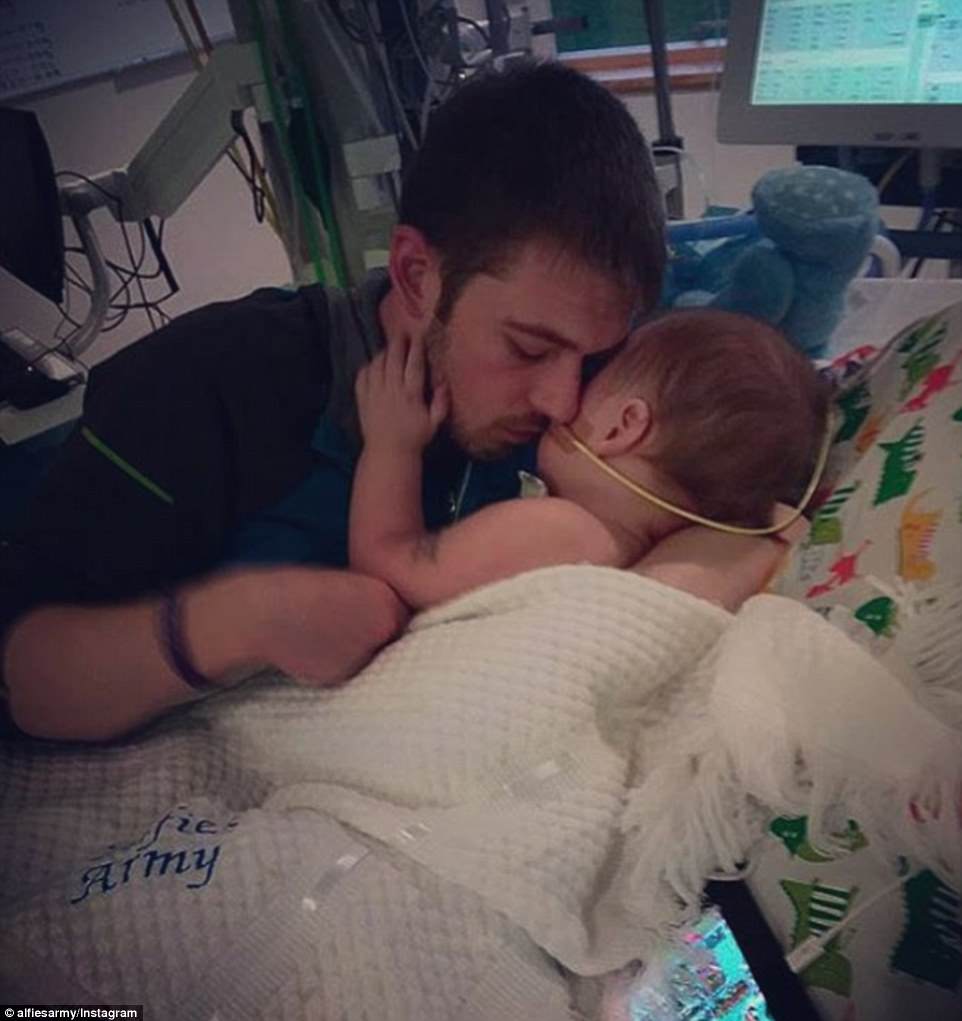 Febraury 21 2018: This picture is shared the day after Mr Justice Hayden rules in favour of hospital bosses, saying he accepted medical evidence which showed further treatment was futile 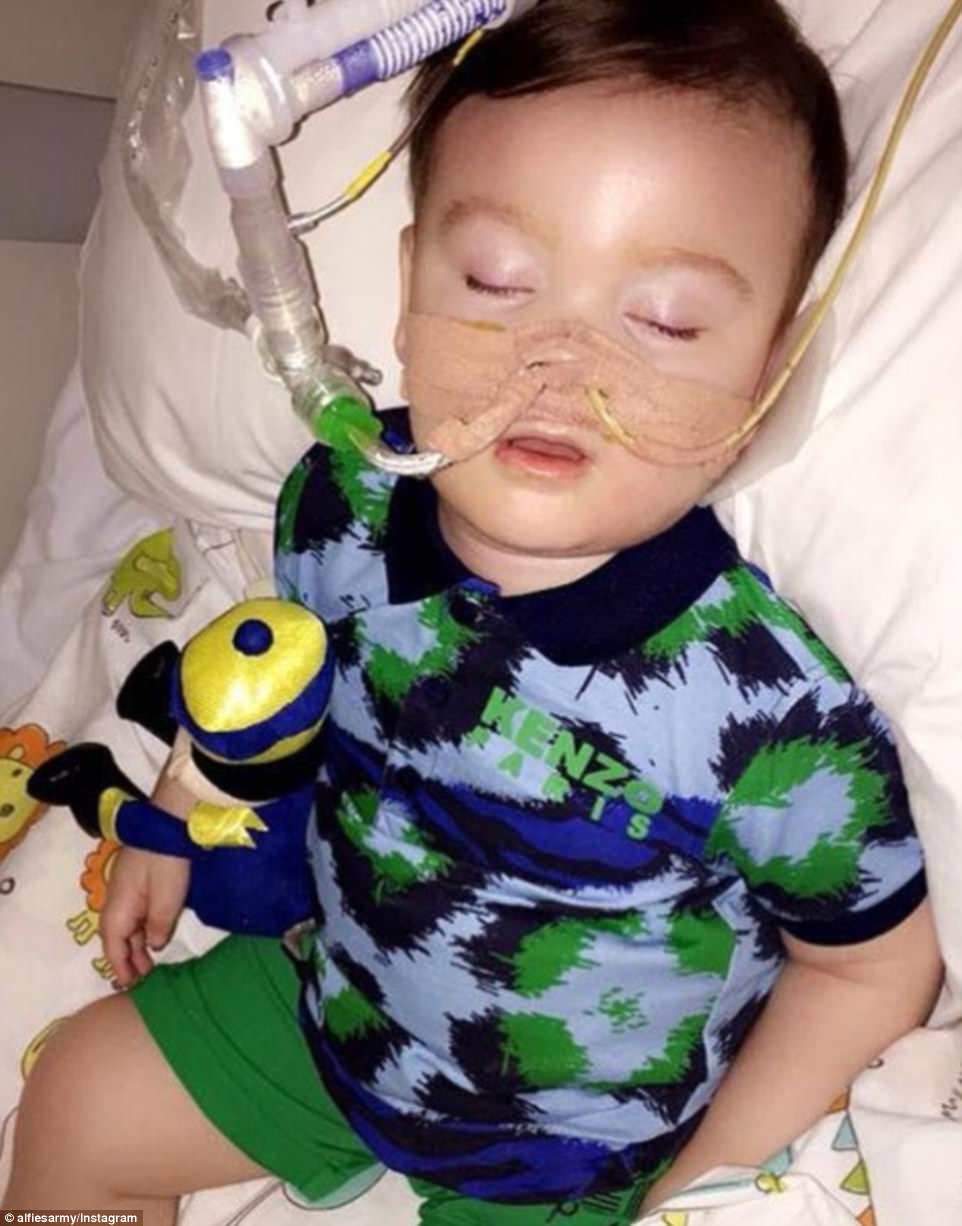 March 18 2018: As the family wait to hear back from the Supreme Court about their case, they share this photograph of the youngster being weaned of drug clobazam 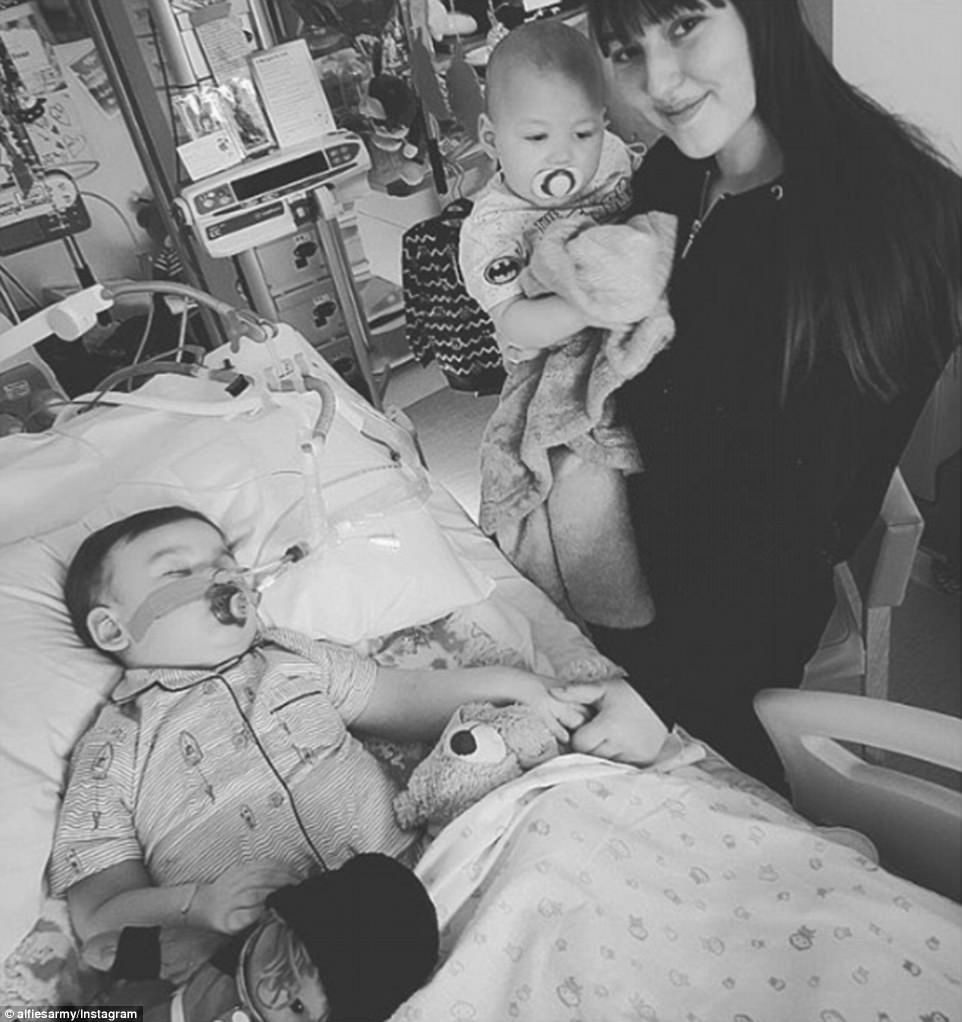 April 6 2018: This image is posted of the toddler, with the caption written by Kayleigh: ‘I’ve witnessed all of the following things that Alfie has done (NOT DURING A SEIZURE); stretching, coughing, swallowing, making breathes on his own, yawning, sucking his dummy, watched him react to the tickles on his feet/arms, watched his heart rate go up when I softly tickled his arm and more!’ 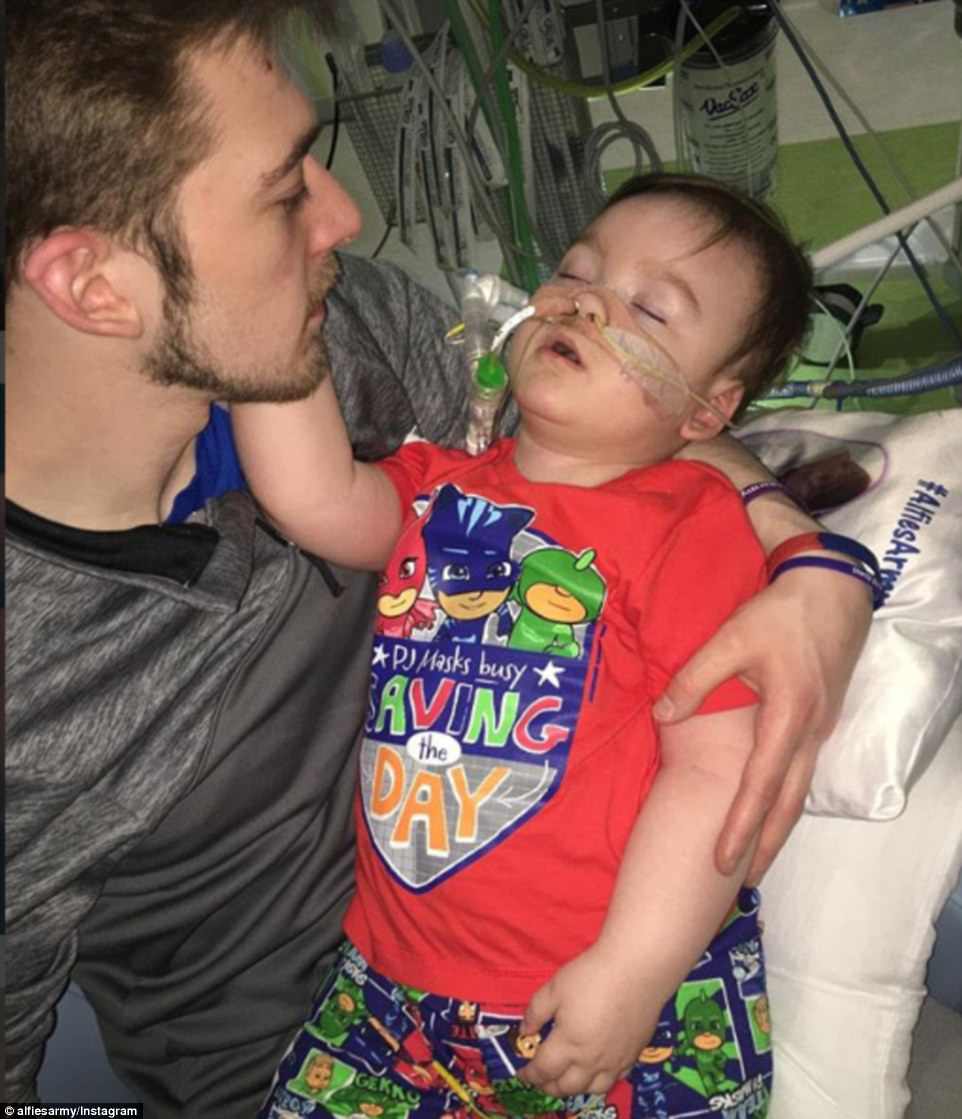 April 18 2018: This picture is shared as Alfie’s father flies to meet the Pope, with the caption, ‘I’d travel as many miles as needed, I’d climb the highest mountain’ 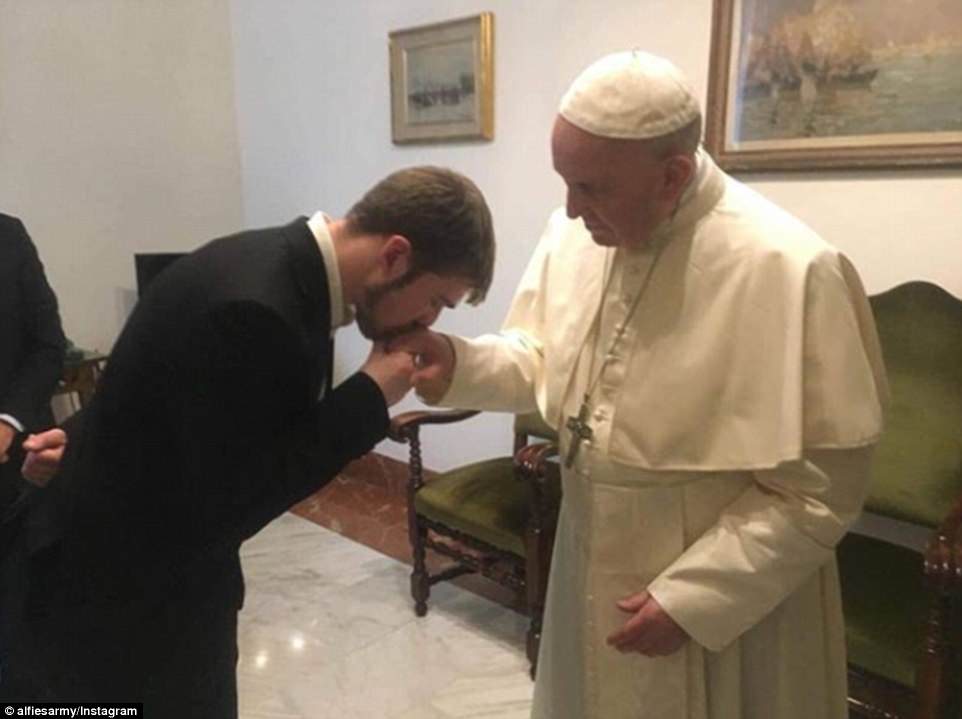 April 18 2018: Mr Evans flies to Rome and meets with Pope Francis. He kissed the Pope’s hand and begged the leader of the Catholic church to save Alfie’s life 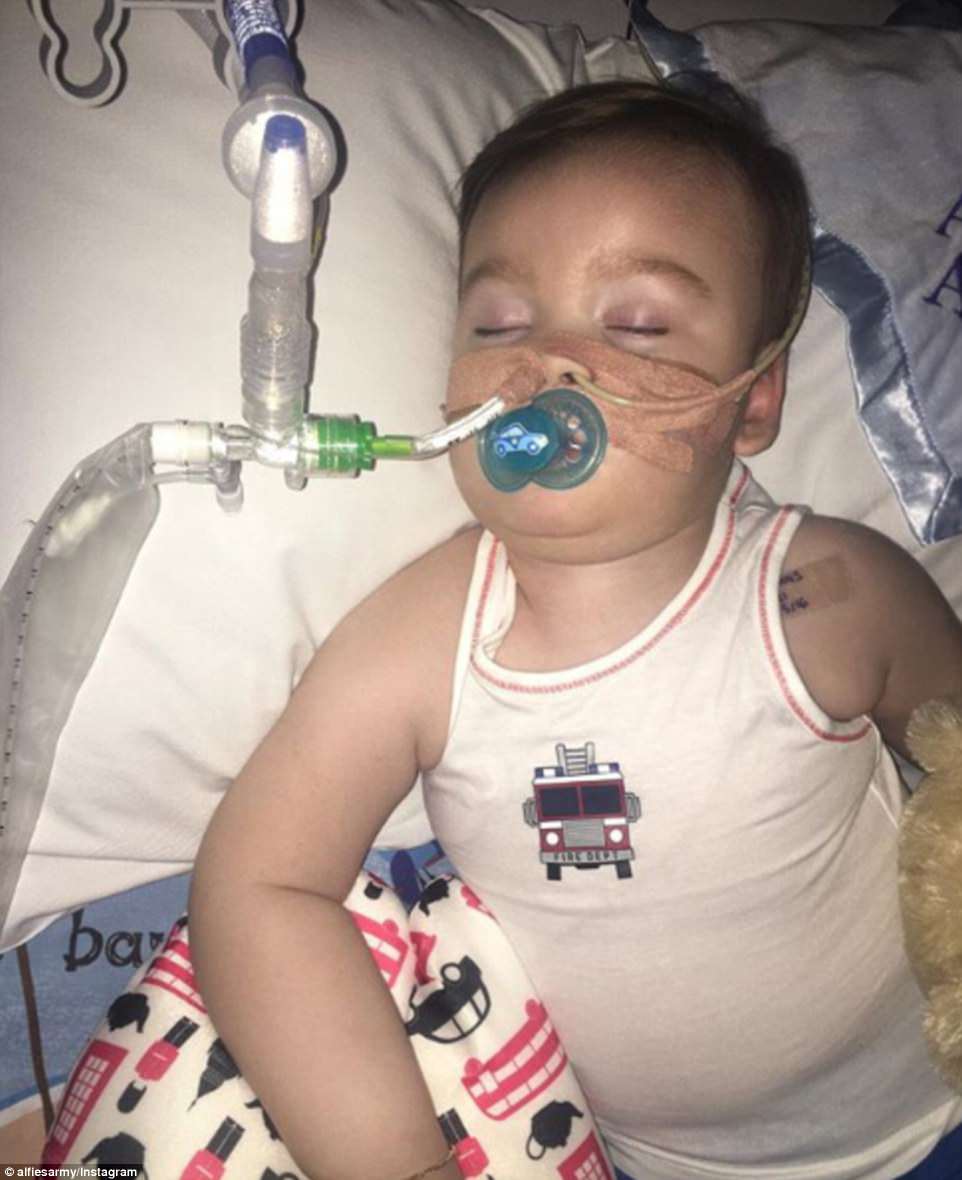 April 22 2018: This picture of Alfie is shared on Instagram with the caption, ‘Our big boy nearly 2 where has it gone??? Please pray with us he is here to reach the 9th may’ 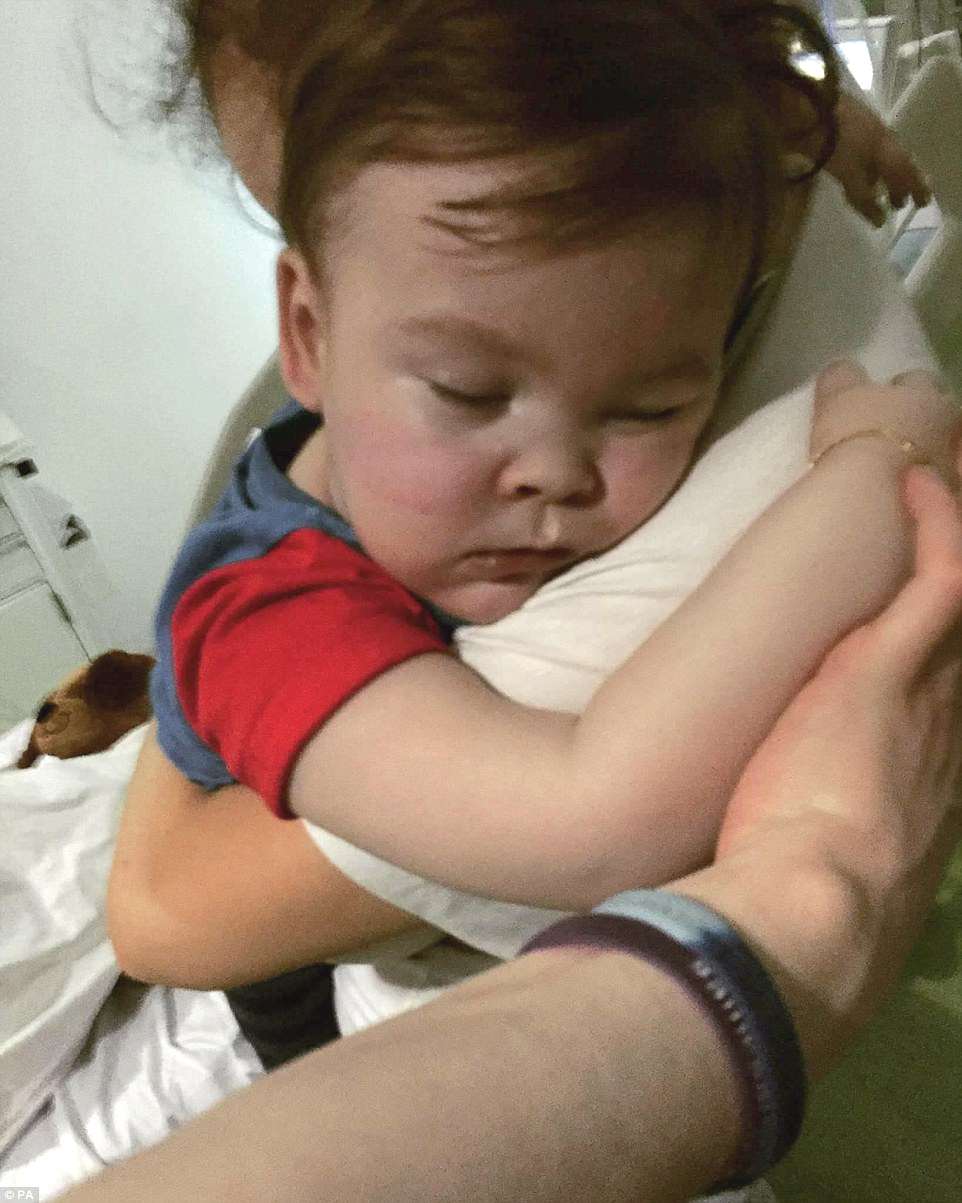 23 April 2018: Alfie’s life support is removed and the little boy breathes independently in the arms of his mother Kate 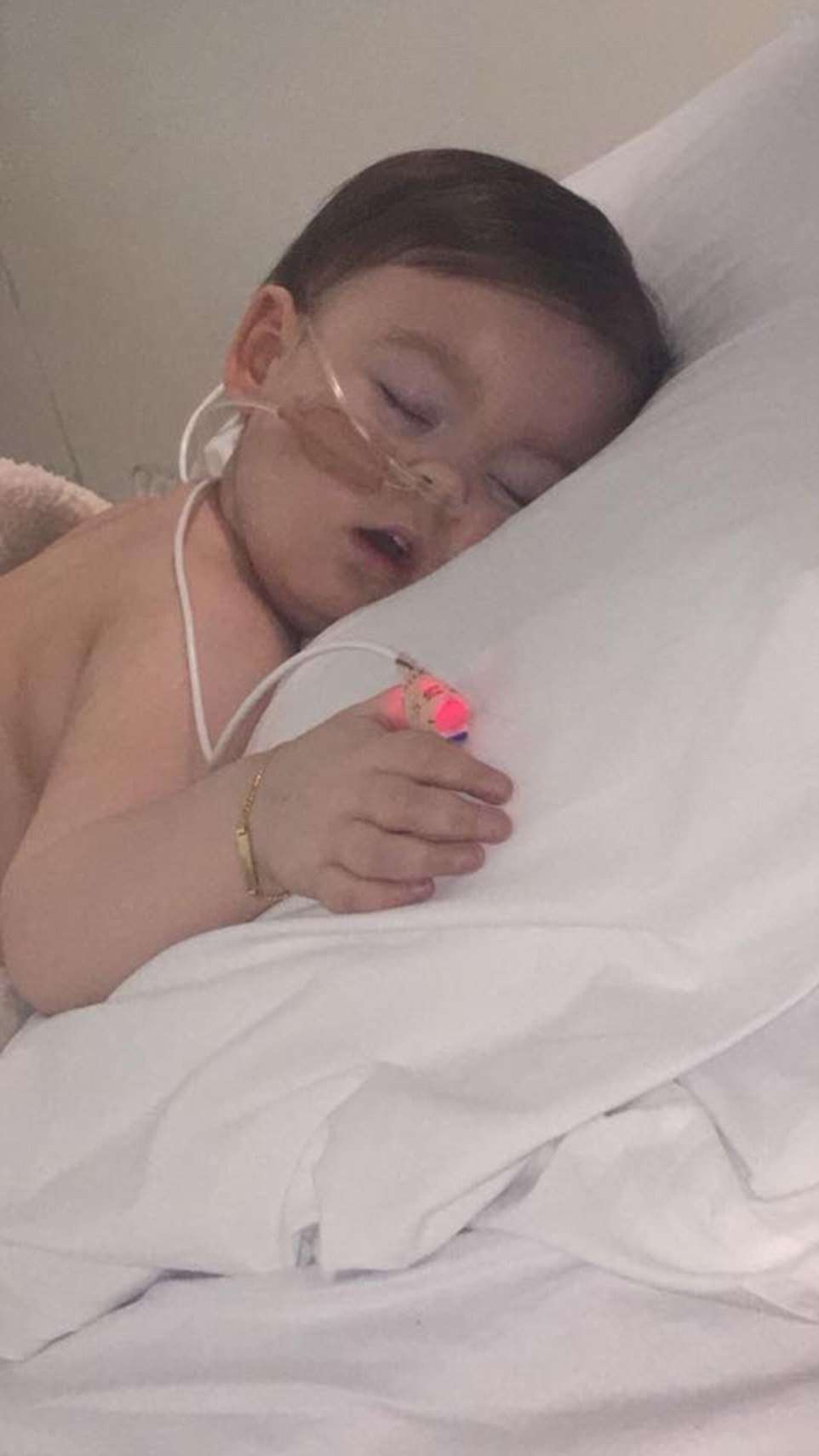 27 April 2018: This picture of the toddler is posted on Instagram the day before he died with the caption, ‘Evening everyone we have a special little fighter who wants to say a massive HELLO to his army’ 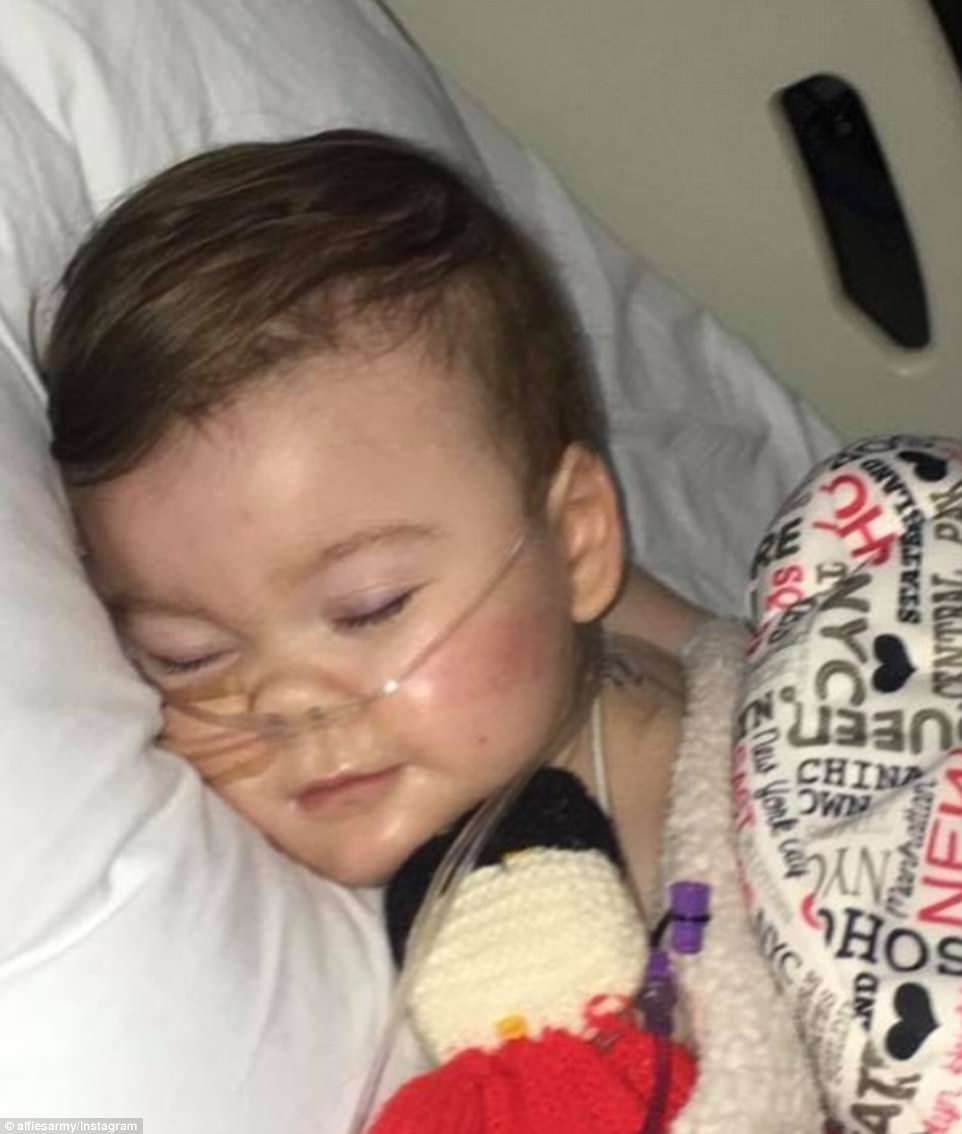 28 April 2018: This picture is shared on Instagram with the caption, ‘So heartbroken our warrior has gained his wings’