Wireless brain implant could save more than 100,000 Americans who die each year from aggressive tumors by zapping them with heat for two weeks

A new brain implant designed to kill brain tumors uses infrared light to activate nanoparticles in the device that generates heat and zaps the deadly mass – and it can be done with 15 minute treatments for just 15 days straight.

The innovation, developed by researchers at Stanford Medicine, is implanted between the skin and skull and increases temperature by up to 40 degrees Fahrenheit, which scientist said is enough to kill cancer cells without damaging surrounding brain tissue.

The technique of using heat, called photothermal treatment, is already being done to treat tumors, but has only been possible during surgery.

Testing of the implant has been carried out on mice with brain tumors and those treated with the technology had a survival of up to three times longer than animals that did not receive the implant.

The brain chip features an antenna to capture electrical signals from a remote transmitter, which are then converted into infrared light that activates the nanoparticles

The team is focusing on glioblastoma, an aggressive type of cancer that kills more than 100,000 Americans each year and requires open-skull surgery to treat, which is then followed by numerous rounds of chemotherapy.

The team fitted the brain implant with star-shaped gold nanoparticles and a small antenna to convert electrical signals to infrared light, which activate the nanoparticles to generate heat – and this can all be performed remotely.

Hamed Arami, PhD, co-lead author of the paper, said in a statement: ‘The nanoparticles help us target the treatment to only the tumor, so the side effects will be relatively less compared with chemotherapy and radiation.’

The power and wavelength light of the implant can also be adjusted to target tumors of different sizes and locations in the brain. 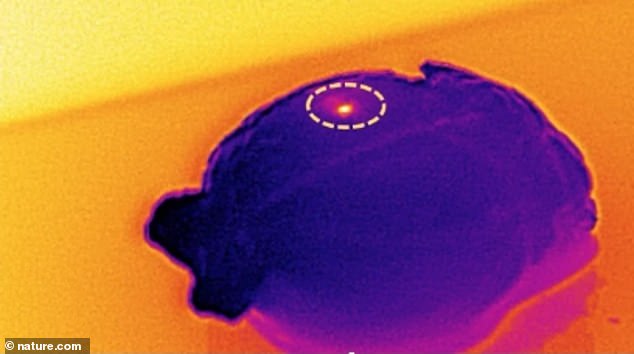 The nanoparticles generate heat to kill the brain tumor. Here is an activated chip implanted in a mouse 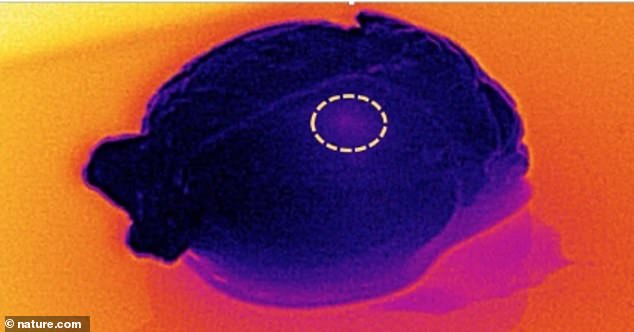 The treatment is just 15 minutes a day for 15 days. Pictures is a non-active chip in a mouse 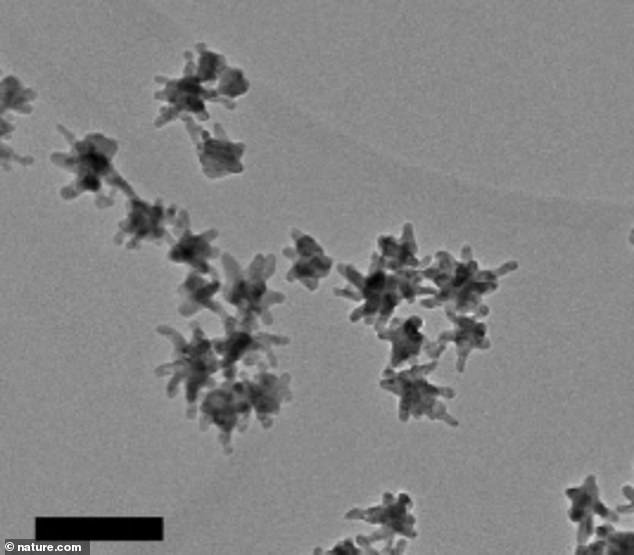 The team fitted the brain implant with star-shaped gold nanoparticles

‘The structure and dosage of the nanoparticles are calibrated to generate just the right amount of heat,’ the team shared in a statement.

Mice with aggressive tumors were broken up into two groups: one received the implant and the other did not.

The mice with the implants were treated for 15 minutes a day over the course of 15 days and all showed improvement without the need for surgery.

The treated mice lived significantly longer than the untreated mice, with doubled or tripled survival times on average, though the researchers caution that it’s difficult to extrapolate survival benefit across species with such different lifespans. 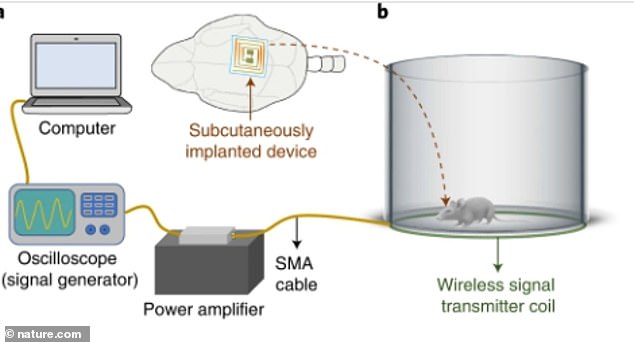 Not only were the mice not bothered when the nanoparticles were activated, the team found the nanoparticles stayed at the tumor site and did not endanger surrounding tissues. This graphic shows how the signals start in a computer and flow to the chip in the mouse

When the new treatment was combined with chemotherapy, the mice lived even longer.

‘Glioblastoma patients don’t often live more than two to three years after diagnosis because you can’t get rid of every part of the tumor, and the tumor can become drug-resistant or radiation-resistant,’ Arami said.

‘The goal is to combine this with other treatments to extend survival.’

The researchers envision that their device, when adapted to human patients, could be used for in-home treatment in addition to surgery, chemotherapy or radiation, without adding to the burden of hospital visits or interrupting their normal lives.