Doctors said five-year-old Rebecca Roper might never walk or talk again after a tumor in her brainstem left her immobile and mute.

But to their astonishment, just weeks after her life-saving operation last summer, she spoke, declaring that she wanted some light-up sneakers from Skechers.

And now, she is taking her first steps.

The medical team at Jimmy Everest Center for Cancer and Blood Diseases in Children in Oklahoma City said they were astounded by Rebecca’s swift bounce back.

The progress is bittersweet since scans recently showed that her tumor has grown back.

But speaking to DailyMail.com, Rebecca’s family say they are just overjoyed that, thanks to her determined attitude, she is able to go back to school and have experiences they feared she would miss out on. 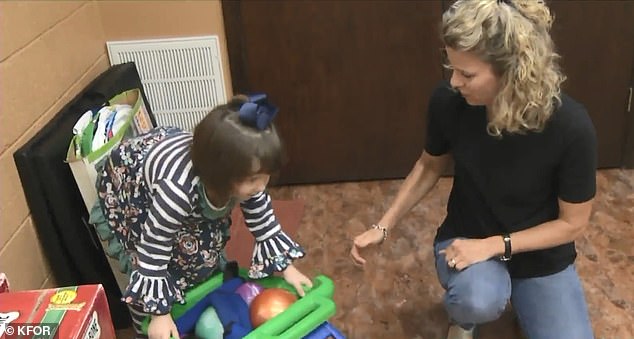 Doctors performed CT scans and found a tumor known as a glioma on her brainstem. Pictured: Rebecca undergoing physical therapy this year

Roper had been born happy and healthy, and was hitting every developmental milestone.

But things slowly took a turn for the worse. In 2017, Rebecca started having trouble speaking and was losing her balance.

‘She had been acting like she hurt her ankle so we took her to the doctor and he said it didn’t seem like there was anything wrong with it,’ her grandfather Larry Coats told DailyMail.com.

Coats drove Rebecca to the local hospital in Enid where a CT scan revealed there was a mass on her brain. Doctors referred them to the Jimmy Everest Center.

‘They did an MRI and they found a tumor on her brainstem that was the size of a lemon,’ Coats said.

‘You could imagine it was like, I can’t believe this is happening.’

Rebecca had a tumor known as a glioma, which begins in the glial cells that surround nerve cells and help them function.

Gliomas are among the most common types of brain tumors and can severely impact brain function.

According to the American Cancer Society, there are three types of gliomas -astrocytomas, oligodendrogliomas, and ependymomas – but it is unknown which type Rebecca had.

Although treatment can vary based on the size, type and location of the tumor, standard options include surgery, radiation, chemotherapy and targeted drug therapy.

Because brain tumors can affect areas of the brain that control motor skills, speech and vision, sufferers may have to undergo physical therapy, speech therapy and occupational therapy as part of their recovery. 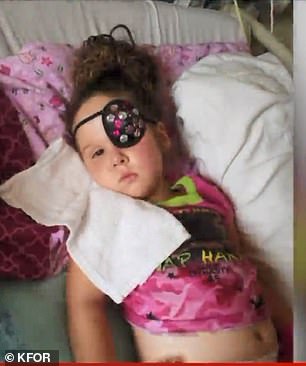 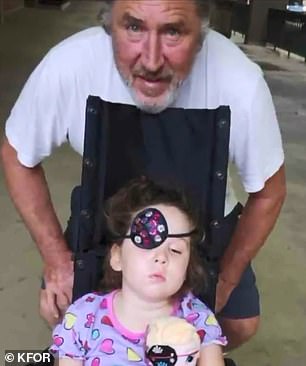 Giomas are among the most common types of brain tumors and can severely impact brain function. Surgeons had to remove two vertebrae to reach Rebecca’s tumor, but some of it was too deep to remove safely. Pictured: Rebecca after her surgery, left and with her grandfather, right 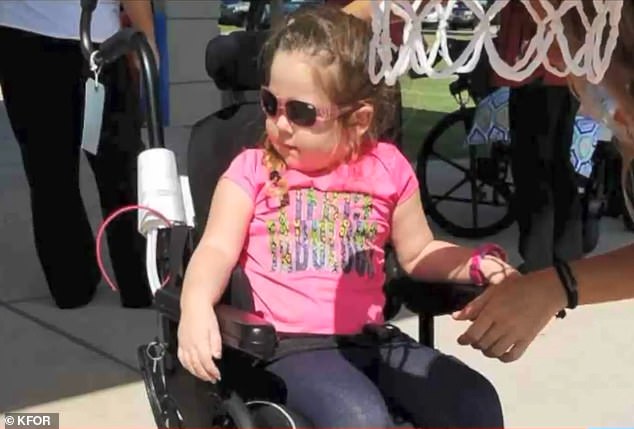 After the procedure, it was unknown if Rebecca would regain the motor skills she had lost, but she is now in physical and occupational therapy. Pictured: Rebecca in a wheelchair after her surgery 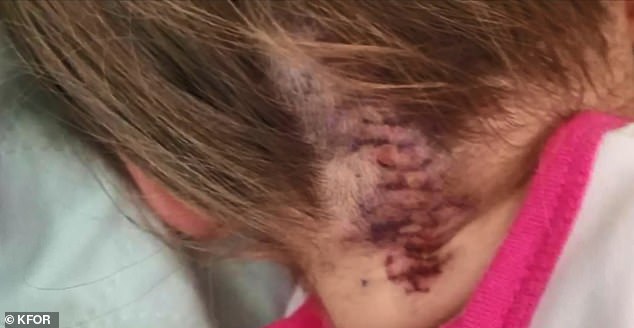 Although Rebecca’s tumor was characterized as low-grade, MRI scans showed it was beginning to grow back, so doctors put her on chemotherapy. Pictured: Rebecca’s post-surgical scar

‘It was in a very bad location right behind the brainstem, which carries all the nerves from the brain down to the spinal cord,’ he said.

On July 26, 2017, Rebecca had her operation. Surgeons had to remove two vertebrae to reach the tumor, but some of it was too deep to remove safely.

Following the surgery, doctors told Coats that it was a waiting game to see if Rebecca would regain the ability to swallow, speak and walk.

‘She also had one eye after surgery that wouldn’t focus and they put a patch over the good eye to make the one that wasn’t focusing focus better,’ Coats said.

It was while watching cartoons with Coats that Rebecca spoke her first words and began her long road to recovery.

‘Everything fell into place after that and it was like a light blinking, and you know: “Okay the light’s going to come back on,’ Coats said.

‘She hadn’t said anything for a month-and-a-half and we were at a rehab center in Bethany.

‘A commercial came on for Skechers light-up sneakers and she said: “Papa, I want those.” At first I said: “Okay” but then I thought: “Wait, what did you say?”

‘It was quite a moment. She started talking out of nowhere and I knew she was going to be okay.’

Rebecca has been in physical and occupational therapy relearning lost motor skills including walking, talking, balance and catching objects.

Exercises include building a wall out of cardboard boxes, tossing and catching balls, and walking across a balance beam.

Despite her progress, the kindergartner still has a long way to go.

Although Rebecca’s tumor was characterized as low-grade, MRI scans showed it was beginning to grow back, so doctors put her on chemotherapy.

Doctors hope they can control the glioma’s growth until Rebecca stops growing because, when she’s stopped, the tumor might stop as well.

‘We’re so happy where she is right now,’ Coats said. ‘She just started kindergarten and she’s a little different because she doesn’t walk completely right but she gets along with all the other kids very well.’