Branding William a ‘snob’ is unjust but shows the deep chasm between the brothers, says RICHARD KAY

Just what was going through Prince William’s mind when he sat down with his brother to discuss Harry’s fast-moving romance with actress Meghan Markle?

Deep bonds of interdependence that go beyond the normal ties of kinship have framed their relationship ever since that heart-stopping moment when they lost their mother almost 23 years ago.

Theirs was the most affectionate story of brotherly love, one in which each looked out for the wellbeing of the other, from their schooldays at Eton, through the military and into their launch as full-time working royals. Navigating the pitfalls of romantic encounters while living in the spotlight was always the most challenging of all.

In the summer of 2016, William had been married for five years and was the proud father of two young children. In that same five-year period, Harry had broken up with two long-term girlfriends, Chelsy Davey and Cressida Bonas. He envied his brother for having had the good fortune to meet and marry such a wonderful girl as Kate Middleton.

Then he met California-born Meghan, and in the space of just a few weeks, he had already whisked her to the Arctic Circle to see the Northern Lights and flown her to Botswana — a part of the world to which he feels a deep connection — to camp out under the stars.

According to the new book, Finding Freedom, when Harry met Meghan, William, instinctively cautious compared with his impulsive younger brother, urged him to take things easy.

‘Don’t feel you need to rush this,’ he is quoted as saying. ‘Take as much time as you need to get to know this girl.’

To any observer, this would seem eminently sensible advice from someone who had not yet met his brother’s new love interest. Harry, we are now told, did not see it that way.

He heard no tone of generosity from an older brother who had always been there for him; but instead, in those last two words — ‘this girl’ — he detected an icy snobbishness. And authors Omid Scobie and Carolyn Durand describe this as ‘anathema’ to Harry’s approach to the world.

‘During his ten-year career in the military, outside the royal bubble,’ they write, ‘he had learnt not to make snap judgements about people based on their accent, education, ethnicity, class or profession.’

Lofty ideals, but according to the book, the conversation between the two brothers was as much about the tired dynamic — as Harry saw it — between him and William. There was ‘a thin line between caring and condescending’ and that line appeared to have been crossed. Harry no longer felt he needed looking after.

How long he had harboured these prejudices is unclear, but they triggered an outpouring of princely rage. Harry was offended, ‘p****d off’, as the writers elegantly put it. ‘P****d off that his brother would ask such a thing.’

A friend is quoted as telling the authors: ‘Harry could see through William’s words. He was being a snob.’ It’s an extraordinary slur to make about anyone. About a brother, it is brutal.

Leaving aside the coarseness of the language, these are hard and unforgiving sentiments, the words fizzing with resentment. This ill-judged book may do considerable damage to Harry’s relationship with the rest of the Royal Family — but the breach between the brothers is vast, and may even be irreconcilable. 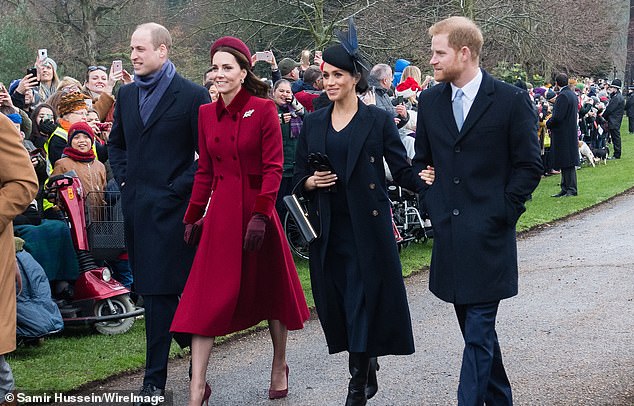 According to the new book, Finding Freedom, when Harry met Meghan, William, instinctively cautious compared with his impulsive younger brother, urged him to take things easy

But, as children, William and Harry were whisper-close. When the baby of the family had a problem, he knew his big brother was always there.

This was the way Diana wanted it: two boys born into the Royal Family with uniquely different but complementing roles. After her death in 1997, the importance of their fraternal bond grew in their sorrow and loss, and also in their need to protect one another. The image they projected was one of them against the world. And the stability they provided one another was crucial.

And on that day that William sat down with Harry, his intention, according to the book, was ‘to make sure Harry wasn’t blindsided by lust’. All William thought he was doing was looking out for his kid brother, just as he had done at school and in the difficult days after Diana’s death.

Friends say he would never make such a gratuitously offensive observation.

He had followed his mother’s advice — almost to the letter — to not marry in haste. He and Kate had known each other for eight years before their engagement, Harry and Meghan a mere 13 months, if as the book claims, they were secretly engaged long before they made it public.

How long ago it now seems when Harry was as close to Kate as he was to William, a warm-hearted trio delighting the world. The two Princes are, of course, hardly the first brothers whose close friendship has been split by marriage.

The tragedy is that before Meghan came along, Harry was the very essence of a popular 21st-century prince. He was what every romantic expected a dutiful young royal to be — not only a brave soldier, but someone who could laugh easily at himself.

Meghan’s arrival in his life changed everything. But was this her fault, or was it down to Harry’s uncertainty in how to bring a fragrant Hollywood figure into the restrictive and highly controlled world of royal life?

Meghan, remember, had become accustomed to floating her views in public, on everything from climate change and human rights to clean water and gender equality. This became clear on one occasion when the ‘fab four’ of William, Kate, Meghan and Harry were on stage promoting their Heads Together mental welfare charity, and the Duchess of Sussex naturally dominated the microphone. 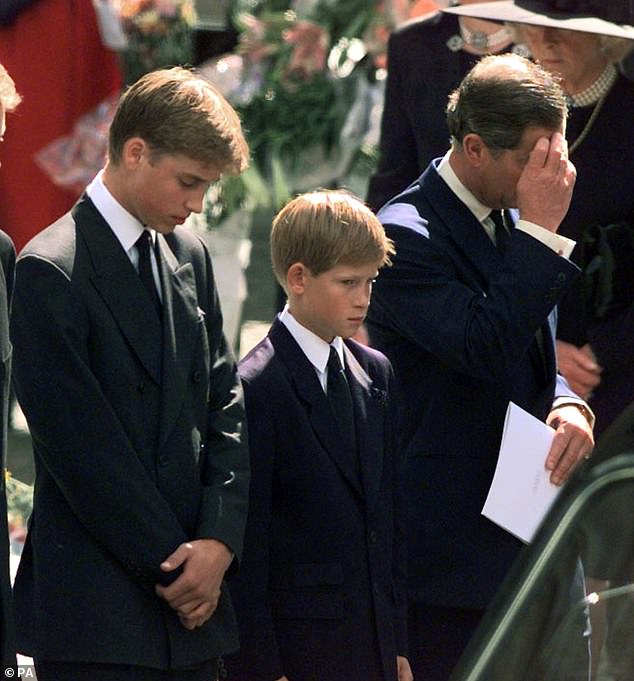 As children, William and Harry were whisper-close. When the baby of the family had a problem, he knew his big brother was always there. This was the way Diana wanted it: two boys born into the Royal Family with uniquely different but complementing roles

There was an air of discomfort about William and Kate as they listened. Here was a young woman making it plain that her new royal status was something to be used so that her voice could be heard — an unknown philosophy in royal life. At that moment, the silent Kate beside her looked almost dull. In truth, all Kate was doing was following a protocol that has kept the Royal Family in business for generations.

But by then the relationship between the brothers was barely above the cordial. Ever since that heart-to-heart about Meghan, the two had scarcely spoken.

The day of ‘Uncle’ Harry popping across the courtyard from Nottingham Cottage to the Duke and Duchess of Cambridge’s neighbouring home at Kensington Palace bearing gifts for his nephew George and niece Charlotte were over. And yet when it came to their engagement interview with the BBC, Harry went out of his way to lavish praise on his brother for the way he had welcomed Meghan.

William, he said, had been ‘longing to meet her’, and had been ‘wonderful . . . amazing . . . fantastic’ over the course of the romance. Hardly the actions of a chilly and indifferent snob.

This was in November 2017 and, according to the book, the brothers were by now ‘spending barely any time together’.

Why? Scobie and Durand lay the blame at William and Kate’s feet. ‘The invitations (from them) were the first to dry up.’

Once the Duke and Duchess of Sussex were married, the gap between the brothers only widened. The newlyweds had rented a farmhouse, close to Great Tew in Oxfordshire, where, says the book, the Cambridges failed to visit, even though ‘the invite was there’.

Their rift was confirmed publicly last October when the Sussexes gave an interview to Tom Bradby of ITN in which Harry acknowledged that he and his brother were ‘certainly on different paths at the moment’.

Even if this one-sided account is only partly accurate, it makes for desperately sad reading. For William there is profound sadness that he knows his mother would have shared. 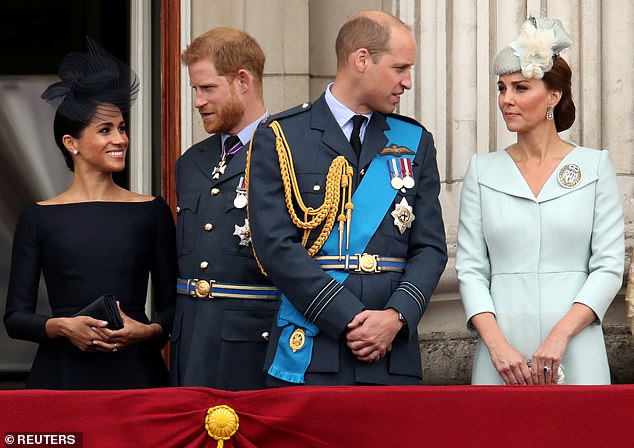 In Harry, he had what he saw as a lifelong ally: a younger brother whose good nature and joviality provided elements of fun at times when he, as heir to the throne, had to be dignified.

Harry also provided the kind of unflinching advice on which a future monarch relies. It seems extraordinary that this mutual support has now gone.

Both brothers have always needed each other because both are single-minded and stubborn. At one stage, let’s not forget, it was William’s intransigence and grumpiness that was more of a worry in the family than Harry’s youthful immaturity.

Beyond their shared past, the truth is the two are very different characters. William has transformed from the reluctant public performer of only a few short years ago and has, if you like, come to terms with his fate.

Kate and their children have contributed to that. It has made him more appreciative of the hierarchical nature of monarchy.

Harry’s tragedy is the sense of resentment he now appears to have — along with misplaced notions of grandeur.

‘He and Meghan seem to believe that they were responsible for all the goodwill that cascaded down on the Royal Family following their wedding,’ says a courtier.

It was typified by their reaction to an invitation for Meghan to join Prince Charles as his guest at an exhibition at Buckingham Palace. Insiders say that when the Duchess learned television cameras would be recording the event, she pulled out.

‘She and Harry allowed the idea to take root that Charles wanted to ride on the coat tails of their popularity,’ says a figure. ‘Quite apart from the staggering discourtesy of not going, it demonstrated their ludicrous sense of entitlement.’

For William the temptation must be to wish that he never had that conversation with Harry in the first place. Or, if he is feeling charitable, he might wonder if he ever really knew Harry at all.