Brandon Nimmo ‘re-signs with the Mets after agreeing an eight year, $162m contract’ as New York also ‘agrees a one-year deal worth $10m for David Robertson’

The New York Mets have an agreement with Brandon Nimmo to re-sign the outfielder, according to a report.

The franchise have succeeded in keeping hold of their center fielder and have agreed to an eight-year, $162 million contract, according to Jeff Passan.

The not only maintains the strength of the Mets’ roster but also adds to the biggest payroll in baseball.

Brandon Nimmo is reportedly re-signing with the New York Mets on an eight-year, $162m deal

It is the second-richest contract in Mets history by total value, behind Francisco Lindor’s 10-year, $341 million deal signed prior to the 2021 season.

Nimmo will be entering his eighth year in the majors next season, all with the Mets after the team selected him in the first round of 2011 amateur draft and looks set to see out his career in New York. 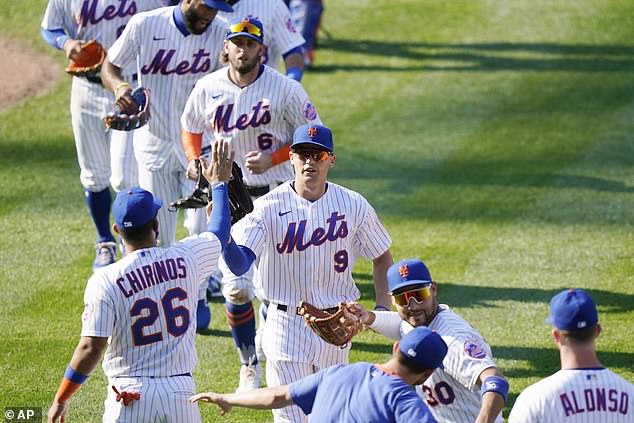 Nimmo will be entering his eighth year in the majors next season, all with the Mets

The Mets have also reportedly agreed to sign David Robertson for one year and $10 million.

Robertson was acquired by the Phillies in a trade deadline deal and was part of their bullpen that helped the franchise reach the World Series before ultimately losing out to the Houston Astros.