Dinner or playtime? You decide.

This brave girl was nonplussed by a huge lion which pawed at her through a glass partition at the zoo in South Carolina.

It might be that she was unaware of the lion’s true intention. And it’s unlikely the great beast wanted to play.

More likely is that it was hoping dinner had been served a little early.

The footage begins with the looming creature pawing away at the glass partition. Seconds later it tries to knaw its way through the glass.

‘Isn’t it beautiful,’ remarks a man, assumed to be the child’s father.

The big cat stops and looks, bemused, at the small child grinning at it from safety.

‘We should take it home,’ suggests a woman, thought to be the mother.

The parents continue to allow the child to bang on the glass.

The regal animal then launches itself from its hind legs at the wall of its enclosure.

Finally, tired by its effort, the beast begins to lick the glass, hoping for just a taste.

The child continues to bang on the glass, much to the delight of its parents. 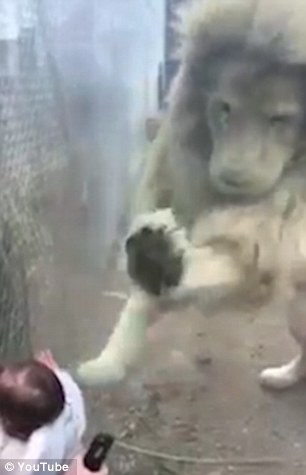 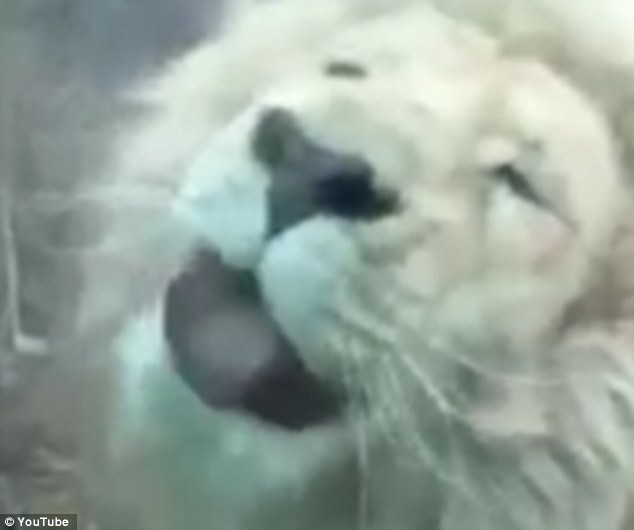 Cuddly or killer? Social media users disagreed over whether the lion wanted to play or hunt

Caity Finley, from Rock Hill, South Carolina, posted the video online last week along with the caption: ‘Ever seen a lion so obsessed with a baby?’

But other social media users suggested the animal was more interested in eating the child than playing with it.

One said: ‘This lion was trying to play with his food. They generally do that. I would have run!’

Another said: ‘When you can’t reach your snack!’