A brave man confronted an alleged thief who ‘tried to steal his car’ and held a gun to his head as he waited for police to arrive.

Footage from the scene shows a man sat inside a white car as another holds a handgun to the window.

The car owner had approached the young man after he heard car doors opening outside his window.

The thief had reportedly gone under the car porch directly outside the owner’s window and attempted to steal his car.

Filmed in Kansas, US and posted online by Fly Height, the clip captured the young man leaning against the steering wheel as the pair waited for police to arrive.

Three officers from Wichita Police Department then appeared from beyond the porch, shining torches onto the scene.

The car owner thanks them for coming, before stepping back to allow an officer to take the young man out of the vehicle. 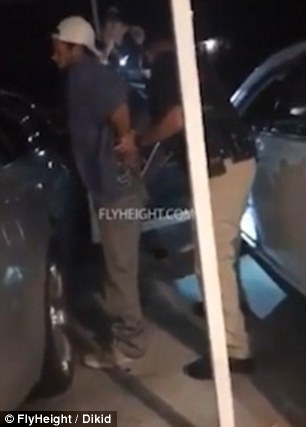 He is then pushed against a nearby car and handcuffed.

The six-minute clip continues as the alleged thief has his pockets searched by officers.

The car owner is heard telling police ‘I should have shot him, to be honest’ as they collect evidence from the car porch.