Incredible photos have emerged of brave surfers making the most of six-metre monster swells in south-east Queensland as Tropical Cyclone Oma powers towards the coast.

A hazardous surf warning is in place from the Capricornia Coast right down to the New South Wales border 750km away, with huge swells of up to eight metres and abnormally high tides set to pummel the coast in the coming days.

The dangerous conditions and warnings to stay out of the water haven’t fazed surfers, who were pictured tackling incredible waves on Thursday.

This surfer found himself airborne while taking on monster swells at Duranbah, NSW’s northernmost beach on Thursday 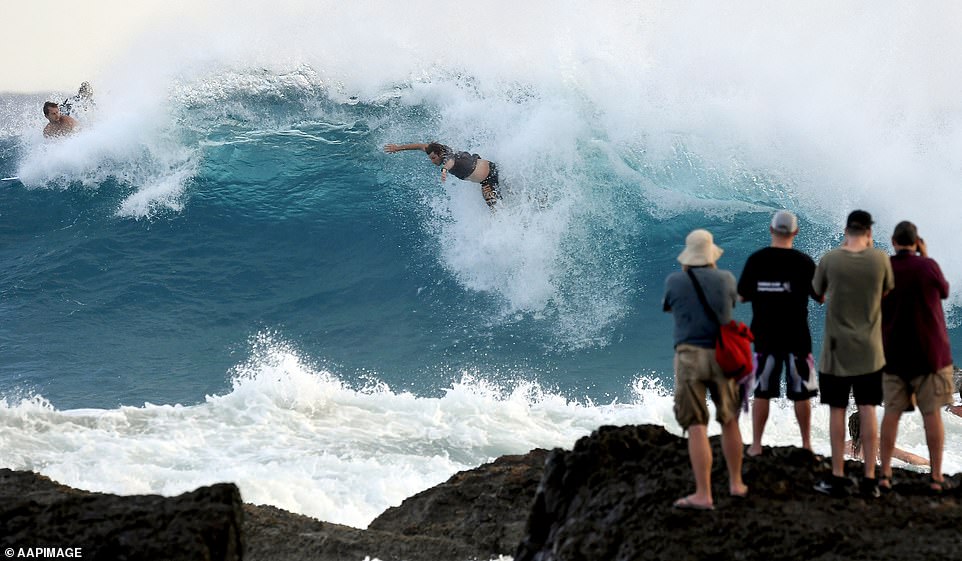 The dangerous surf conditions have been created by Cyclone Oma, which is set to smash the Queensland coast this weekend 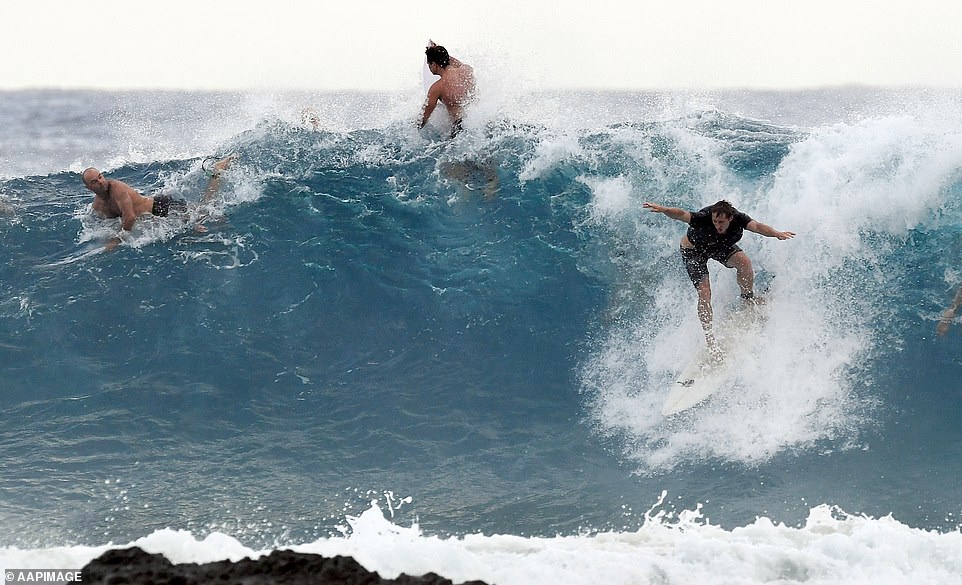 Warned to stay out of the water, many surfers were pummeled by the hazardous surf conditions on the Gold Coast

Dozens of surfers flocked to Snappers Rock on the Gold Coast and Duranbah, NSW’s northernmost beach on Thursday to risk their lives and have a crack at the massive swells of up to six metres.

‘Seas and swell are also expected to increase well ahead of the approach of Cyclone Oma, and these conditions present a danger for even the most experienced swimmers and surfers—so it’s safest to stay out of the water,’ Bureau of Meteorology’s Bruce Gunn said.

Surf Lifesaving Queensland closed a number of beaches on the Gold and Sunshine coasts on Thursday.

All beaches in those regions could be closed by the end of the day.

‘Blanket beach closures are likely to be in effect for at least three to four days,’ its Facebook page stated on Thursday morning.

‘Lifeguards and lifesavers are advising the public to avoid the beach this weekend.’ 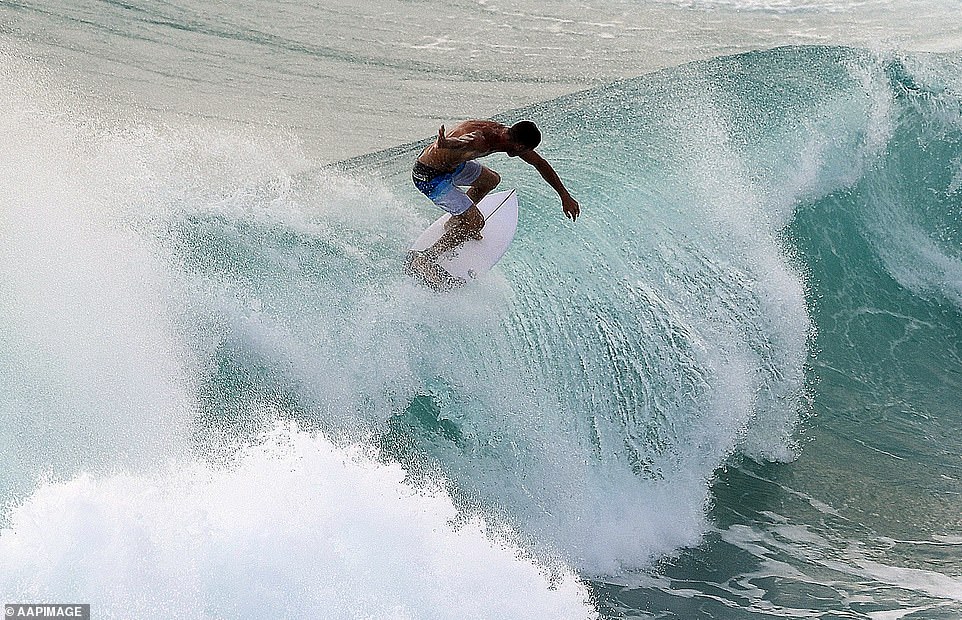 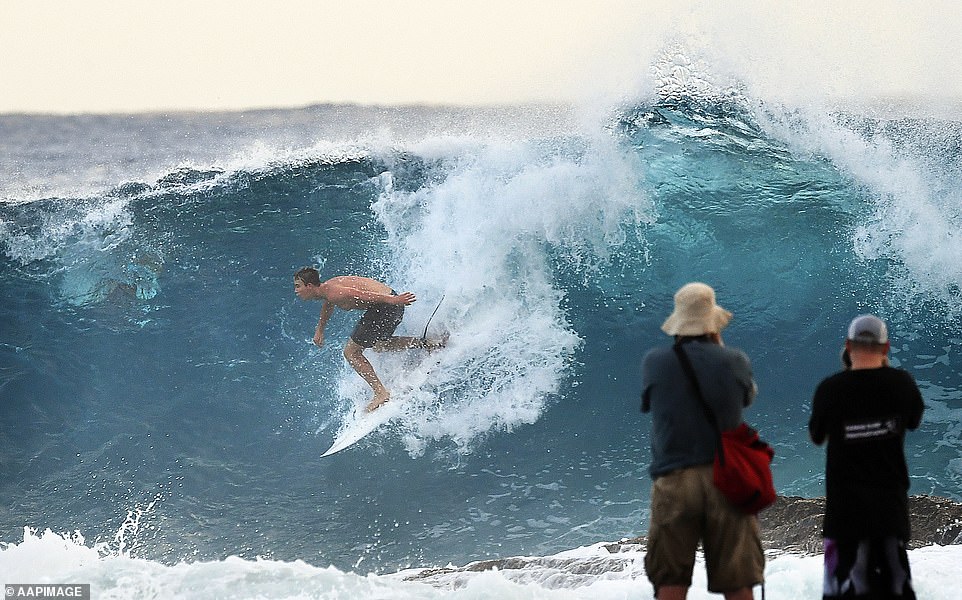 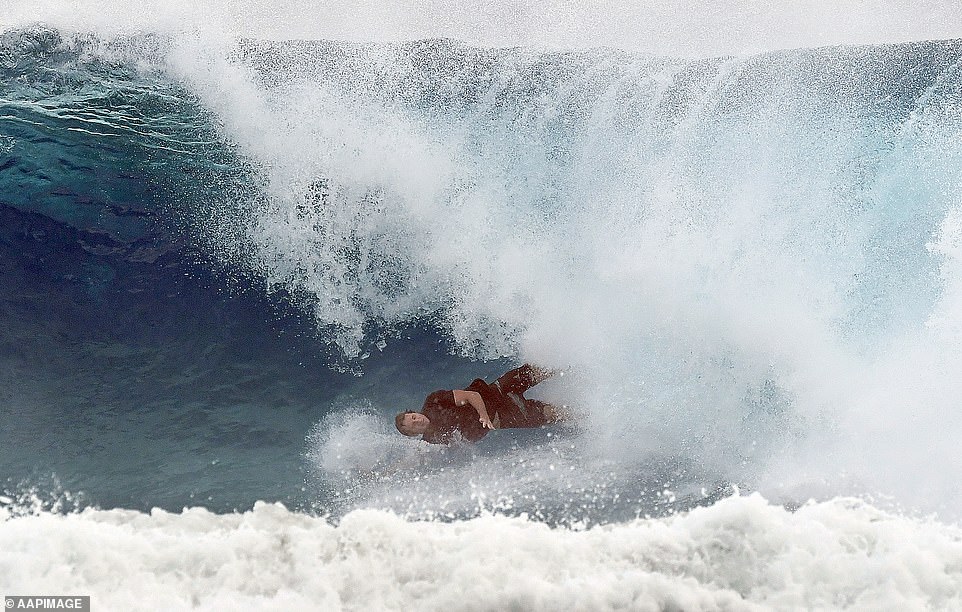 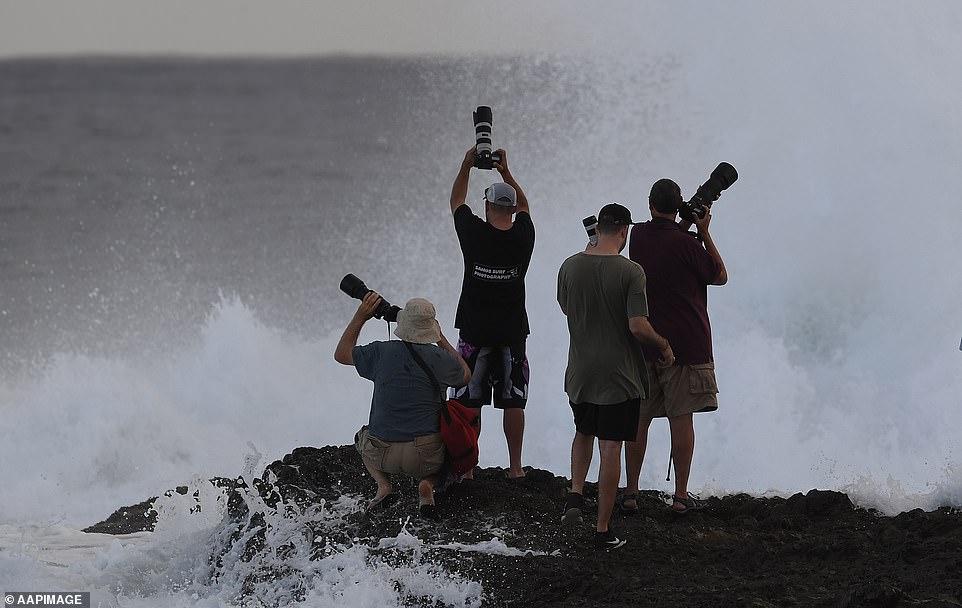 There are more than a dozen possible paths  Cyclone Oma could take, with Brisbane and the Gold Coast potentially right in the firing line.

Authorities are warning people not to panic but prepare, with the cyclone expected to bring wild weather, 130km/h winds and 500mm of rain in just 24 hours.

Oma was a weak category two storm early on Thursday, sitting about 950km northeast off Brisbane and is moving slowly towards the coast at around 10km/h.

It’s expected to continue its slow track towards Brisbane, but at this stage the cyclone is expected to remain offshore.

Bureau of Meteorology forecaster Adam Blazak said there was still disagreement about which path the storm will take, but there was a possibility it could make landfall at the weekend.

‘On Friday, we will see an increase in wind strength and we are expected heavy rain across the weekend,’ he said. 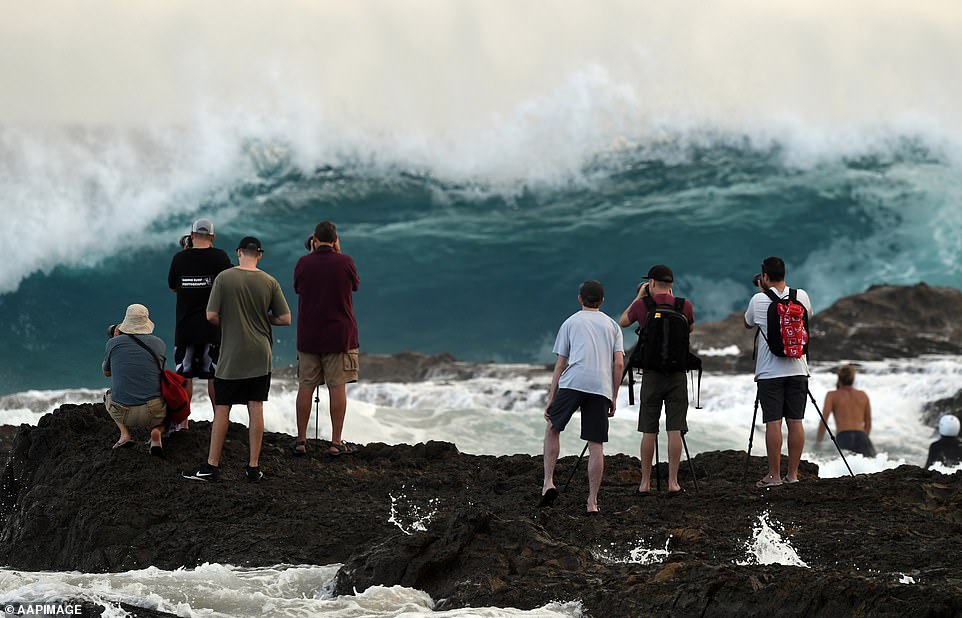 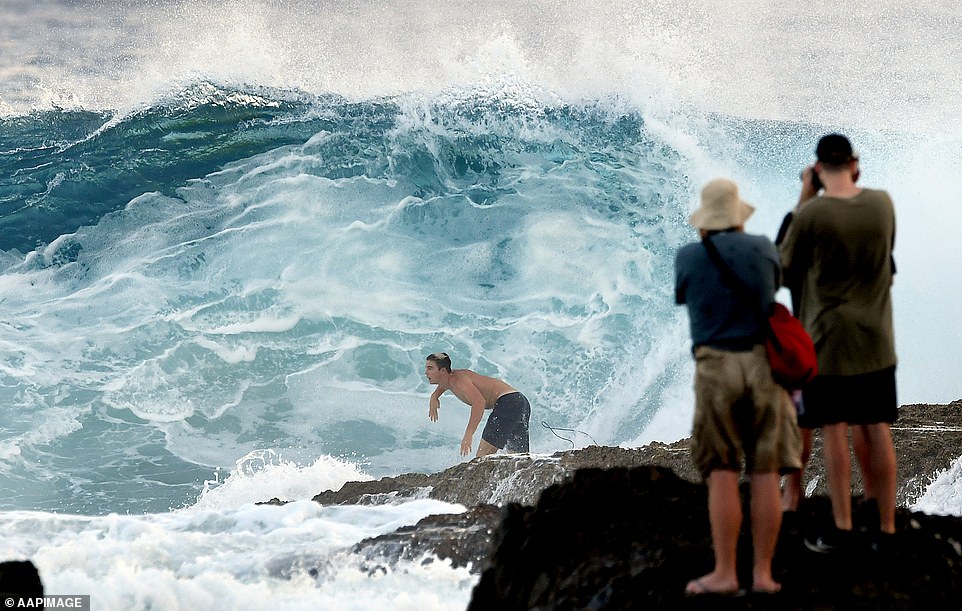 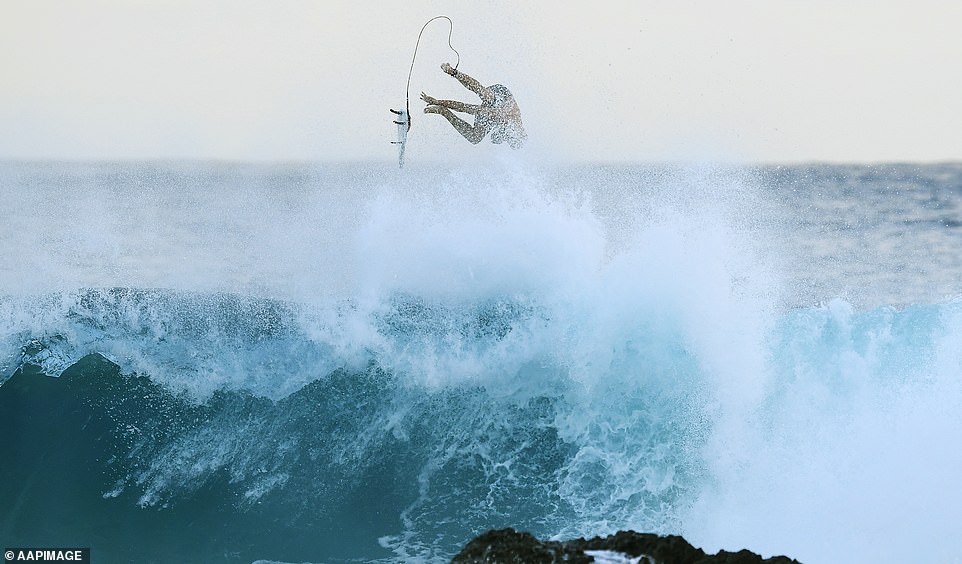 The worst effects are expected to be galeforce winds, high swells that could erode beaches, and the possibility of heavy rain

Forecasters said it’s less likely that Cyclone Oma will cross the Queensland coast, but people are still being warned to expect high winds and dangerous swell.

Experts have issued warnings for high winds and dangerous swell coinciding with king tides along the east coast from Thursday. 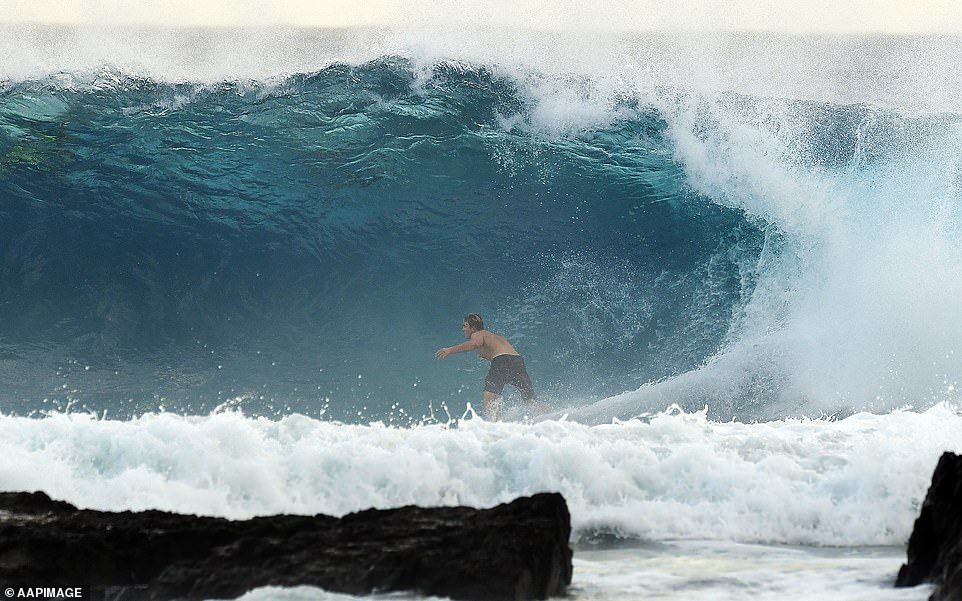 Bureau of Meteorology senior forecaster Jonty Hall says Oma will maintain its slow 10km/h path towards the coast until Friday.

After that, its behaviour is less predictable.

The worst effects are expected to be galeforce winds, very high swells that could erode beaches, and the possibility of heavy rain.

‘We are starting to see the main swell packet from Oma starting to arrive on the south coast of Queensland now,’ Mr Hall told ABC radio. 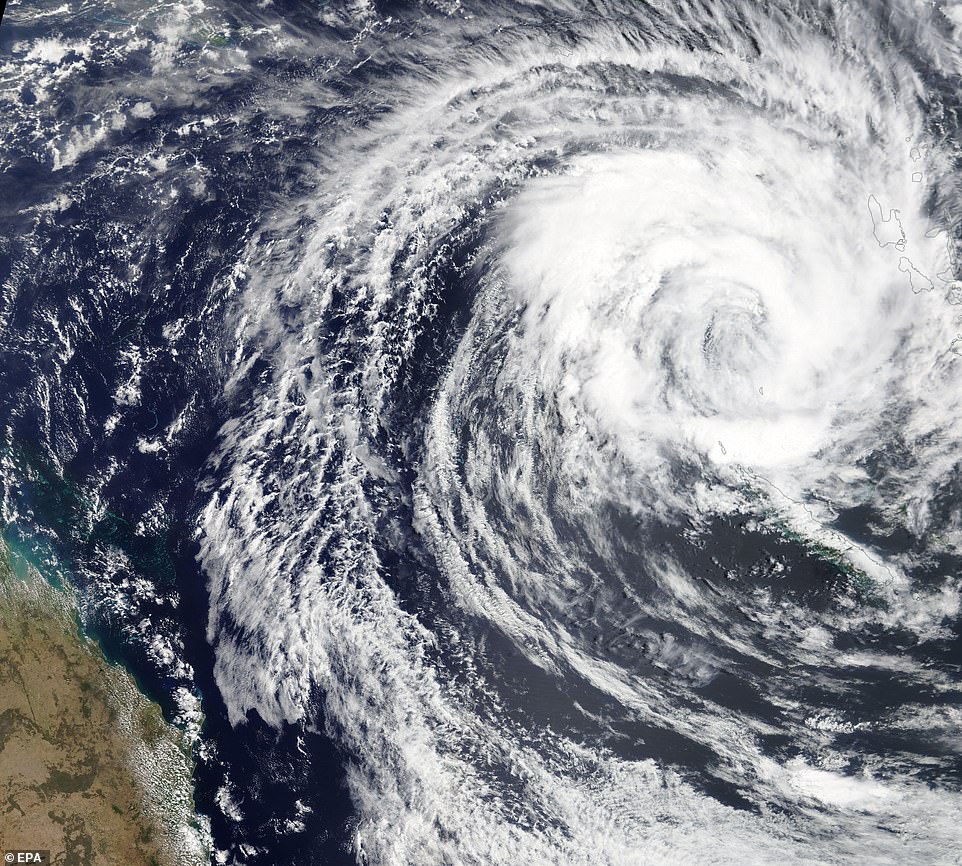 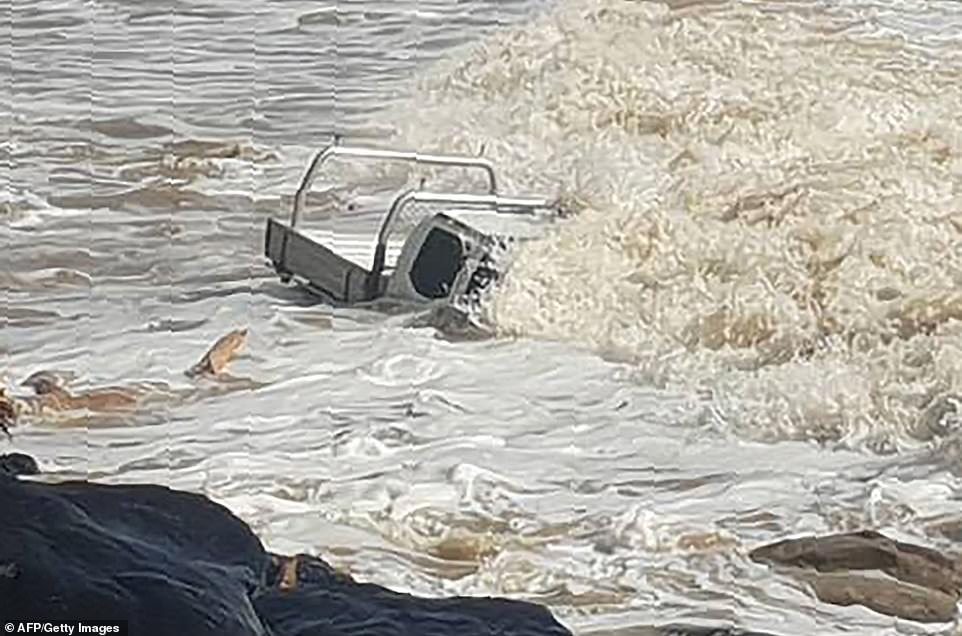 ‘That’s likely to increase in the next couple of days.’

A severe weather warning is in place for Queensland’s east coast from the town of Seventeen Seventy to the NSW border.

‘Dangerous surf conditions are forecast to develop about the east coast of Fraser Island and Wide Bay coast north of Bargara later this afternoon and evening,’ the bureau warned early on Thursday.

‘These conditions are then expected to extend south over the remaining southeastern Queensland coast during this evening and Friday. Beach erosion is likely to continue with the hazardous marine conditions.’ 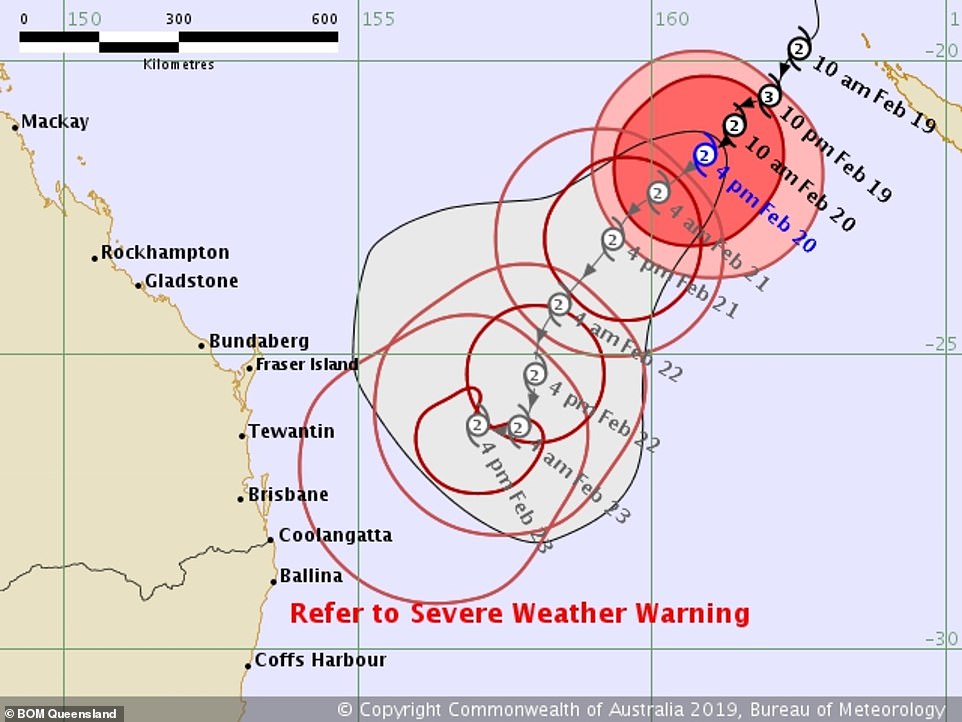 There are more than a dozen possible paths the system could take, with Brisbane and the Gold Coast potentially right in the firing line 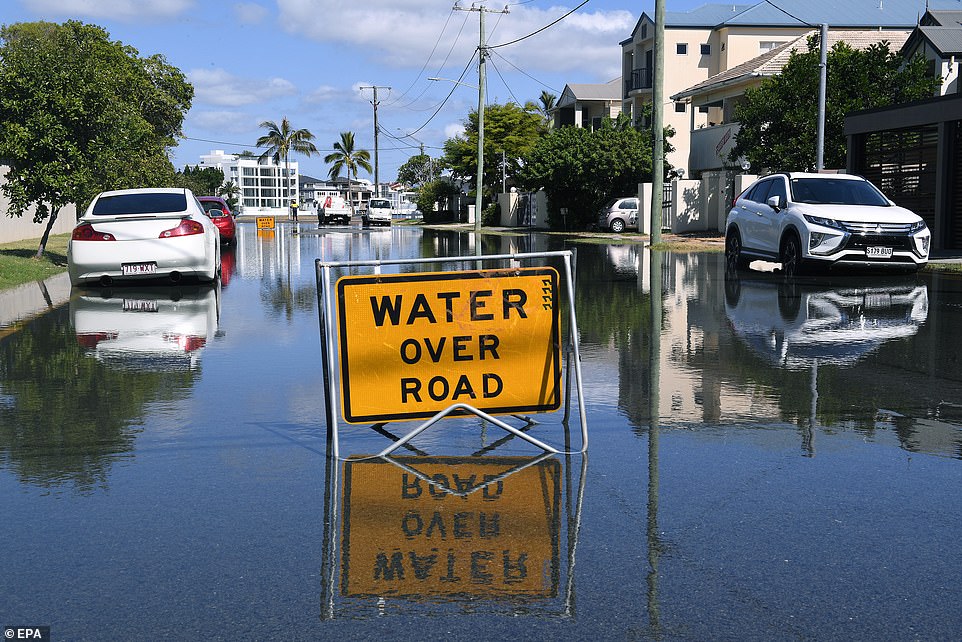 The Bureau has also issued a Flood Watch from Gladstone to the New South Wales border.

While it is unusual for a cyclone to track this far south, it is not unprecedented. In 1990, Cyclone Nancy directly impacted Brisbane, but didn’t make landfall.

The storm grazed the coast near Byron Bay before moving offshore. 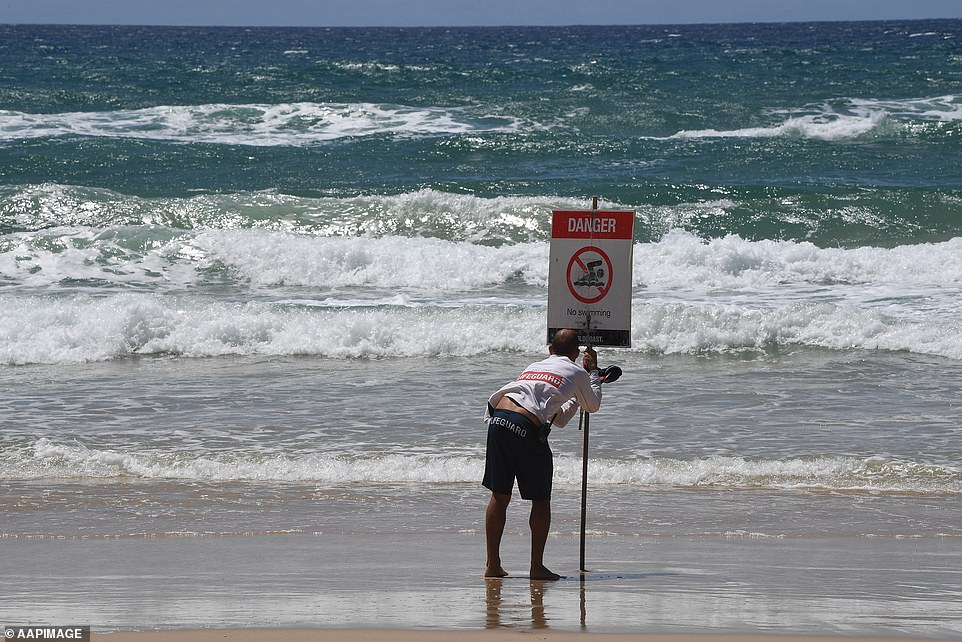