Brave teenage girl, 13, dies in the Disney holiday of her dreams

A brave teenager passed away on the Disney holiday of her dreams after battling a rare gene mutation for seven years.

Ellie Pyle, 13, was just six years old when she was diagnosed with a CASK gene mutation – an extremely rare condition which affects one of the X chromosomes.

The Disney fan, from Nantyglo in Mommouthshire, south Wales, was unable to walk and talk due to her condition, and suffered from daily seizures.

Ellie passed away on September 5 while on a Disney cruise in Norway, which her family had saved for two years for.

Ellie Pyle, 13, passed away on September 5 while on a Disney cruise in Norway, which her family had saved for two years for (Pictured: Ellie with her mother Sarah Smart)

Her heartbroken family have now paid tribute to Ellie, who overcame numerous obstacles to live a full life and travel the world.

Ellie’s mother Sarah Smart, 35, said: ‘She was a very determined little girl. She had a really rough year health-wise. She went to the hospice three times for palliative care but she was really determined to get on holiday which we had booked two years ago.

‘I said for months she was going to get on that boat one way or another and she did.’

Ms Smart, who is also mother to Marley, nine, and Daisy, three, said being disabled ‘didn’t stop’ Ellie from travelling the world and living a full life. 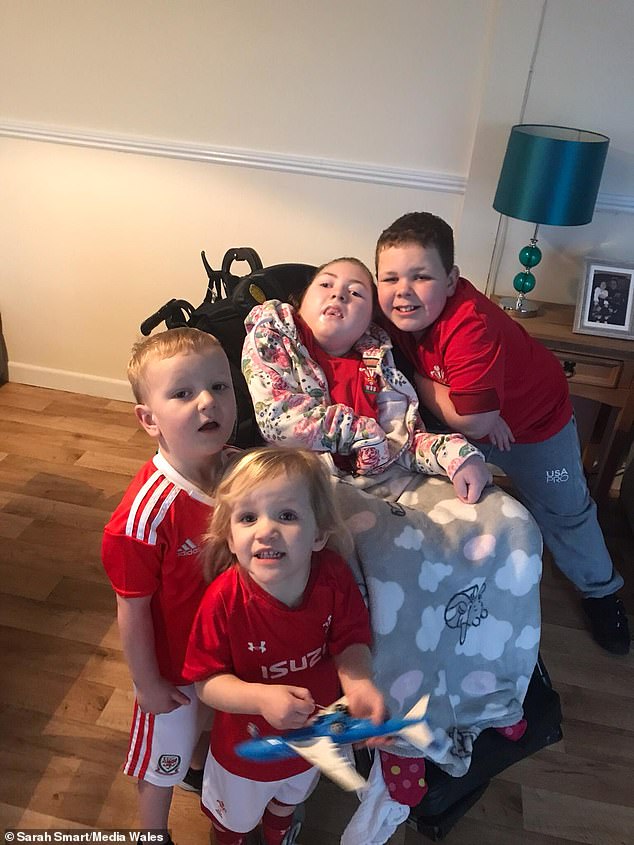 Ellie was just six years old when she was diagnosed with CASK gene mutation – an extremely rare condition which affects one of the X chromosomes (Pictured: Ellie with her brother Marley, sister Daisy and cousin Corey)

She said: ‘Being disabled didn’t stop her from doing things – she has done so many things that even some adults wouldn’t have done. She swam with dolphins twice and went to Lapland twice.

‘We took her on the rapids once in the park. I think she just embraced everything and went with the flow.’

For the mother-of-three, concerns over Ellie’s heath began at just nine months old when she noticed her first-born’s head wasn’t growing at a regular rate.

‘Ellie developed pretty normally until nine or ten months when we first noticed her head wasn’t growing as it should’, Ms Smart said.

‘She had her first fit at 18 months. The biggest challenge was controlling them – they were daily. When Ellie was diagnosed there was only Ellie and one other child at the time.’

Each year, those with the extremely rare condition and their families arrange meet up to support each other and relax. 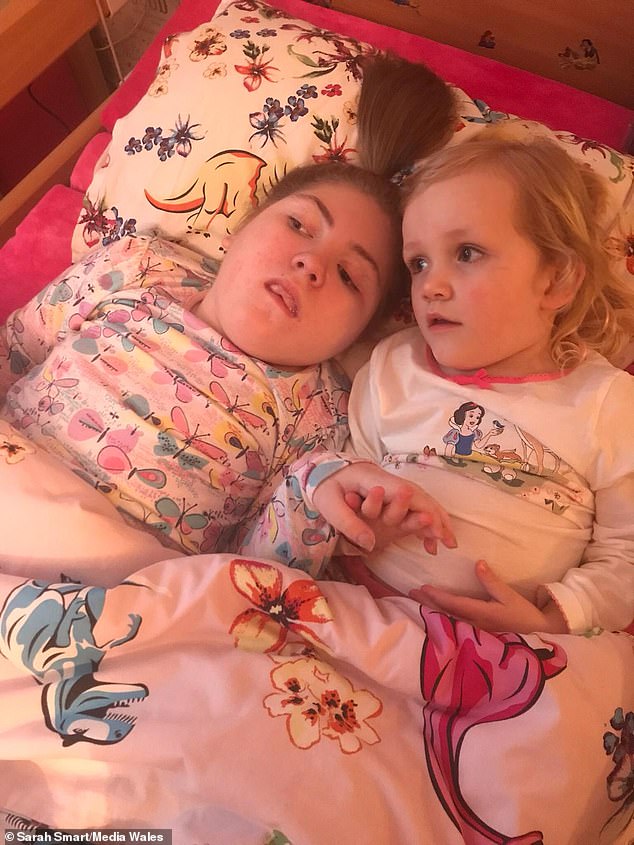 The Disney fan, from Nantyglo in Mommouthshire, south Wales, was unable to walk and talk due to her condition, and suffered from daily seizures (Pictured: Ellie and Daisy) 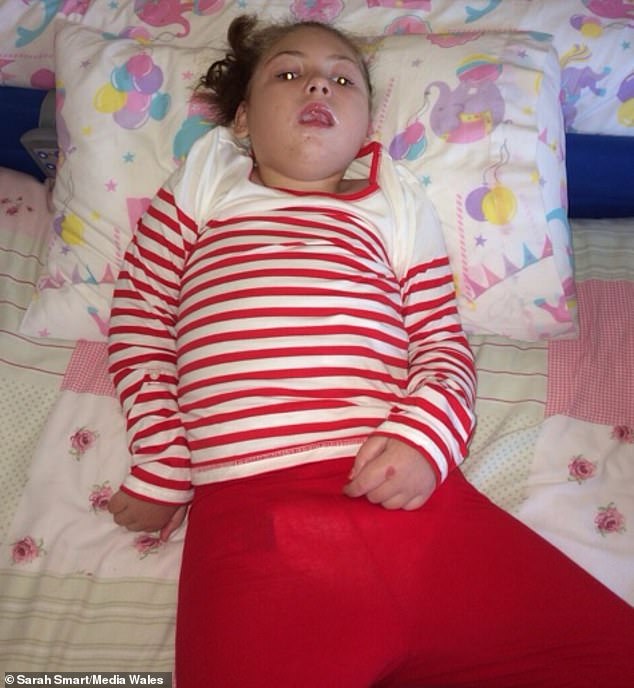 Her heartbroken family have now paid tribute to Ellie (pictured), who overcame numerous obstacles to live life to the full and travel the world

‘This year we went up not far from London and we had a couple of days with all the families. There were 10 girls with the condition,’ Ms Smart added.

‘We went to a disabled camp with heated pools and swings. She loved that, she loved the water. We would also go down [to Ty Hafan] as a family and make memories there.’

On September 1, after two years of saving and planning, Ellie and her family embarked on a Disney Cruise of Norway. The precious time spent together on the boat is something her loved ones will never forget.

Ms Smart said: ‘We went on the Sunday and she passed on the Thursday. She was really well up to then, she enjoyed herself. She really liked the music and the lights. We were meeting all the characters and went to the shows.

‘All the restaurants have animations and we went every night. I took Ellie on a Disney cruise years ago and I always promised her I would take her again. She has been to America, to Florida.’

On Monday, a horse-drawn carriage and Disney princesses gathered in Brynmawr as part of a special service to say goodbye to Ellie.

For her family, it was important that it celebrated the life of their own ‘princess’.

Ms Smart said: ‘We never did anything half-heartedly and I just think we weren’t going to change that for her funeral. There was a horse and cart and the princesses walked her to the church and out of the church.

‘Her order of service was slightly different – it was very pink and colourful.’