Braving the elements on a golf break in Madeira

The fairway to heaven! Braving the elements on a golf break in Madeira

By Adam Ruck For The Daily Mail

Madeira, m’dear, is a tipple for the Flanders & Swann generation and an island most of us leave until later in life — much like golf.

The clientele in Madeira and the game are such a good fit that it comes as a surprise to learn that golf failed to take root here until the Nineties.

Geology may be the explanation. The island rockets up from the deep to 6,000ft summits with scarcely an interruption. Cristiano Ronaldo International Airport’s runway is a platform over the sea ‘and what flat ground there is, has a hotel on it’, said a fellow passenger in the shuttle bus that does a daily round of Funchal’s hotels and time-shares, picking up golfers for a game at one of Madeira’s two courses.

Santo da Serra hosted the European tour for two decades until the pros eventually tired of a layout that took them from 2,500ft much of the way to sea level, and back up again — twice.

I may not have seen it at its best during a spell of wet weather that followed months of drought and flooded the bunkers while the lakes remained empty.

But the clouds did part and revealed sensational views of the rocky eastern tip of the island and a cluster of distant islets. If playing the course on foot would be a hard slog, with the right transport there can’t be many more beautiful places to lose golf balls.

The same goes for Palheiro, which overlooks Funchal’s fabled bay from a similar height. The forecast wasn’t promising, but the club’s manager struck an upbeat note: ‘I don’t think the rain will come until this afternoon.’

In fact, it came halfway down the fourth fairway, drumming on the roof of our buggy with extreme prejudice. ‘Are you an all-weather or a fair-weather golfer?’ I asked my co-driver, a short-but-straight hitter, as is required on a course where danger lurks on all sides and beautiful trees complicate the approach to small greens.

‘Fair-weather,’ she replied, so we made for Palheiro’s halfway house which offered sanctuary three times during the round: after holes five, nine and 12. The rain kept on drumming and we emerged, several glasses of Madeira merrier, only when it was time for lunch. Madeira’s golf offering came into its own when the late, great Seve Ballesteros designed a terrific course in 2004 on the nearby island of Porto Santo, previously known for its sandy beach and reached from Madeira by ferry in a couple of hours of pitch and toss, or by air in a few turbulent minutes. 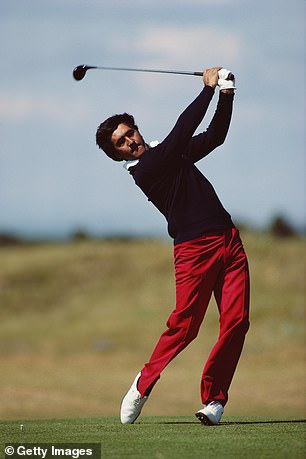 Natural, wide open, well-kept and walkable, Seve’s course crosses the small island, ascending gradually to the cliffs of its windswept north coast, where 13 to 15 are Porto Santo’s glory holes: two challenging par threes either side of a dogleg par four that invites the big-hitter to aim for the green and flirt with the abyss. This is thrilling, fire-and-brimstone golf, finishing with a big shot over water to the last green.

The ‘newlyweds and nearly deads’ label hangs heavily around Madeira’s neck. It may not be a beach and disco place, but all the elements for an energetic holiday are there: surfing, mountain biking, hiking, deep-sea fishing . . .

But those require fine weather, so you might rather be golfing.

On a wet day, the comfort of a good hotel is a great consolation, whether it’s a town palace such as The Cliff, with its spa and two Michelin starred restaurant, or the country house seclusion of the Casa Velha at Palheiro.

Venture out for a tour of Blandy’s Wine Lodge in Funchal. After a fascinating exposition of the history and intricate processes of the island’s fortified wine comes a session in the tasting room, where voluptuous verdelhos and seductive sercials ask only to be loved.

Adam Ruck travelled with Golfbreaks.com, which offers three-nights’ B&B from £255pp at hotels with access to golf clubs in Madeira. BA (ba.com) London Gatwick to Funchal from £180 return. Green fees: £90 at Palheiro and Santo da Serra, plus £40 for a buggy; £80 at Porto Santo. More information at visitmadeira.pt.