A couple has ignited a fierce debate online after they were pictured doing yoga in a park just metres away from a wedding photo shoot.

The duo were spotted in a public park at Carlton Gardens in Melbourne doing acro-yoga while photographs for the special day were being taken in front of them.

This sparked a discussion around who should have moved out of the two groups.

According to the woman who captured the scene and then shared it in a Facebook group, the couple deliberately posed in the background until the bridal party left.

Who do you think should have moved?

‘This pose apparently HAD to be done in the background of the wedding photos and immediately stopped once the party had left,’ she said.

According to the witness, she believed the couple should have moved despite being at the park first.

‘It was a pretty d*** move for them not to relocate, even though they were there first,’ she said.

‘It made for an entertaining scene for our picnic, at least and we were NOT subtle about watching the whole scene go down.’

There were many differing opinions online, with some saying because it was a public park the yoga couple shouldn’t have to move

According to the person who posted a photo of it all in a Facebook group, the yoga couple did it on purpose

Many people took to the post to share who they thought should have moved in the situation.

Many agreed with the idea that it was the yoga couples responsibility to relocate so the wedding party could get the best shots for their special day.

‘I would move and everyone I know would too. Are people that self-absorbed?’ One commenter asked.

‘A d*** move. Public space or not, normal people don’t deliberately try to ruin other people’s photos, even casual snapshots,’ another person said. 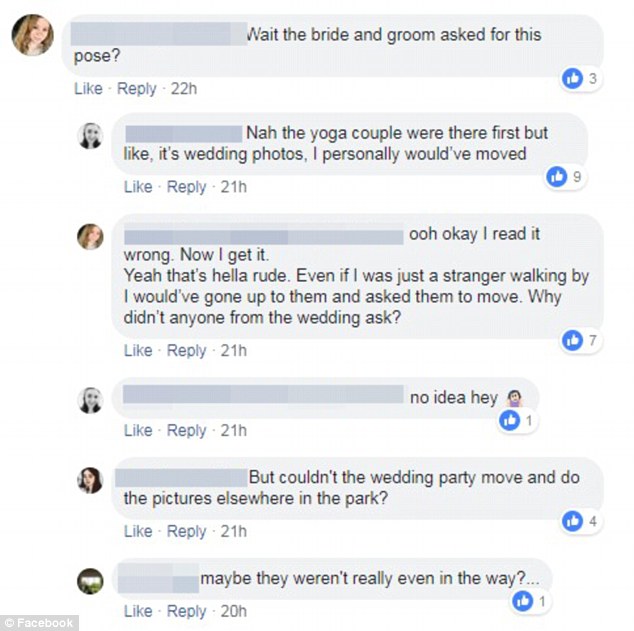 There was also a variety of people who thought the yoga couple were in the right and said it was the wedding party that should have moved.

‘If you have your wedding in a public space you’d better be ready for anything,’ one person said.

‘You literally have no right to tell people to move – you can ask nicely but they don’t have to. There are plenty of rentable outdoor venues – pay up.’

‘I mean, they were there first. Why should they have to move? It’s not like the bridal party couldn’t have found a different spot, there’s no way they couldn’t see the yoga people,’ another said.

The original poster clarified that the lighting was really good where the couple wanted the photo and the background was nice, hence why they were there.