Two armed robbers have been jailed for a total of 35 years after police found this incriminating picture of them celebrating their heist in a hot-tub with sparkling wine and strawberries.

Karl Taylor, 40, and 41-year old Stephen Pattison, from Greater Manchester, never realised the Instagram snap of them quaffing from champagne flutes and frolicking with a girl in a hot tub would land them in hot water.

But it was found by detectives investigating a savage hold up at a Co-op travel agents in which £8,262 worth of sterling and foreign currency was snatched by masked robbers who threatened staff with a machete.

Karl Taylor, 40, and 41-year old Stephen Pattison, from Greater Manchester, never realised the photo of them quaffing from champagne flutes and frolicking with a girl in a Jacuzzi would land them in hot water

Officers raided Taylor’s home found £1,500 in cash hidden in a coat hung up in the hallway along with a mobile phone which contained the text message: ‘Where are you. Bring glasses – and muni.’

The hot tub photo – thought to have been taken at a holiday lodge – was also found on the phone.

At Minshull Street Crown Court, Manchester, Taylor from Mottram, near Hyde was jailed for 17 years and Pattison, of nearby Stalybridge got 18 years after both were convicted of conspiracy to rob.

The cheeky picture and text message – both sent days after the raid – were shown to the jury during their trial. The 23-year old girl in the picture was acquitted of wrongdoing.

The court heard the robbery took place at 1.20pm on July 29 2016 at the Co-operative Travel store in Glossop, Derbyshire. Taylor and Pattison drove two getaway vehicles to the scene in tandem before bursting in as mainly elderly customers were browsing inside.

Prosecutor Henry Blackshaw, said: ‘It had all the hall marks of a sophisticated, professionally planned robbery. Taylor was carrying a yellow draw string bag and Pattison was carrying a very large machete.

‘One elderly female customer was seen removing her rings from her fingers and putting them in her pocket as discreetly as she could as the two robbers behaved in an extremely aggressive fashion, terrifying staff and customers.’ 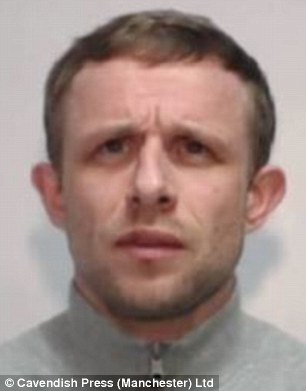 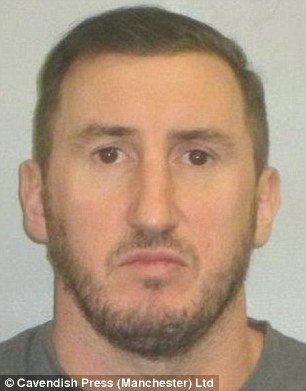 Karl Taylor (left) forced his way int the cash office while Stephen Pattison strode the shop intimidating the customers and staff. They are both pictured in undated police mug shots

Taylor forced his way into the cash office while Pattison strode the shop intimidating the customers and staff.

When Taylor failed to get access to an estimated £40,000 kept in the safe because of a time lock device, he punched one of the female cashiers to the right side of her head. He then grabbed cash from the till and was seen wiping down the drawers to make sure there was no sign of any fingerprints.

The pair escaped in a stolen Mercedes getaway car fitted with false registration plates before transferring to a VW Caddy van left nearby.

But unknown to the robbers a tracking device had been secretly hidden in a bundle of cash taken in the raid. 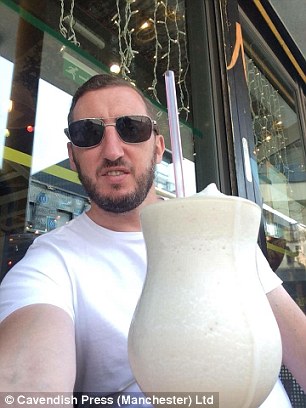 Police tracked the bug to an address in Hattersley but officers found the house empty expect for two workman doing plastering work.

Although the device was subsequently found broken up in an alleyway, officers discovered Taylor was connected to the house and used mobile telephone tracking to connect him to Pattison. Both were later arrested.

Officers searched Pattison’s home and found £2,000 cash plus a balaclava in the bedroom. The machete was discovered earlier inside the VW Caddy after the vehicle was found abandoned.

The court heard Taylor had a string of convictions for arson, burglary, vehicle crime, affray and a previous armed robbery in which a pub landlord was battered with a hammer and left for dead by a gang who snatched £5,000.

Pattison had convictions for heroin dealing and possessing a firearm. In a statement Joanne Hewitt who worked at the travel agent said she was off work with post traumatic stress disorder and high blood pressure and sees a counsellor every week.

She added: ‘It had a huge impact on my life. I still think about the robbery, what happened and what could have happened.’

Her colleague Lynn Woolleson who had worked at Glossop Travel for 18 years said she unable to leave the house and would sit in her bedroom. She felt angry, violated and vulnerable and would be bad tempered towards her children.

She suffers from flash backs and talks about how traumatic it was and still suffers melt downs and panic attacks when she goes out.’ 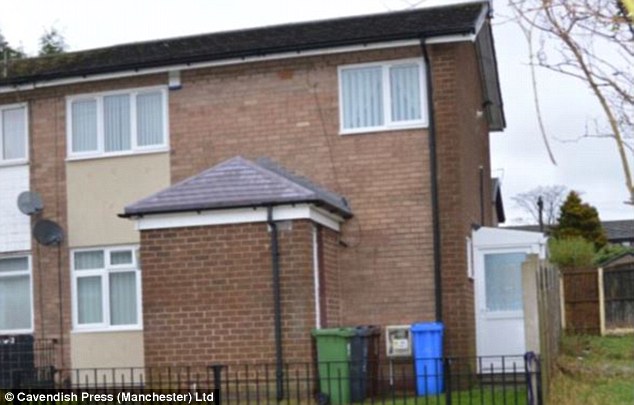 Officers raided Taylor’s home (pictured in an undated photo) found £1,500 in cash hidden in a coat hung up in the hallway

They also found a mobile phone which contained the text message: ‘Where are you. Bring glasses – and muni'[sic]

In mitigation for Taylor, John Marsh, said: ‘He’s not a sophisticated or professional criminal – in my submission switching cars, balaclavas and gloves is not particularly sophisticated.’

For Pattison, Mark Ford, said: ‘The robbers didn’t consider for a moment, whether there would be a tracking device. The weapon that was brought into the shop was taken for the purpose of reinforcing the threat they posed and nothing more.’

But Judge Tina Landale told them: ‘You were armed with a fearsome machete and burst into the shop on a busy lunchtime when elderly customers were waiting and it was staffed by middle aged ladies.

‘You were both aggressive and both handled and brandished the machete. About £8,000 was stolen but it’s clear you both intended to steal a great deal more – this was an organised crime. 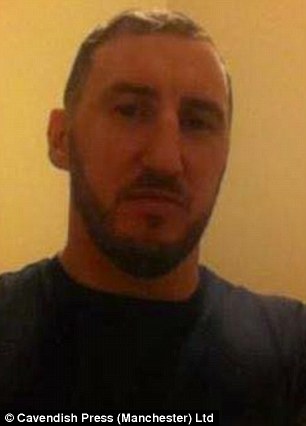 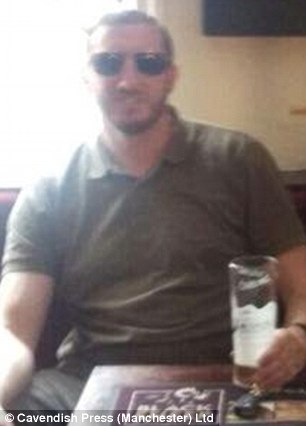 Officers searched Pattison’s home and found £2,000 cash plus a balaclava in the bedroom.  He is pictured in an undated social media photo

‘It was a robbery which involved a significant degree of planning and organisation. You checked out the premises and escape routes, you were using burner phones and switched them off. Two stolen vehicles were driven in tandem, one high powered Mercedes, the other a Caddy van which could conceal the number of occupants.

‘The premises were targeted because of perceived vulnerability, they were in a small town with limited security and female staff.

‘But for the tracker hidden inside the money, it’s likely you would have got away with it.’