A brazen fugitive has pledged to stay on the run until at least Christmas after polling his friends on Facebook as to whether he should stay or hand himself in.

Daley Smith, 29, is regularly using the social media website to taunt police after he went on the run in July for breaching a court order.

Smith from Alsager, Cheshire, who once compared himself to Raoul Moat, is wanted for alleged drug and criminal damage offences. 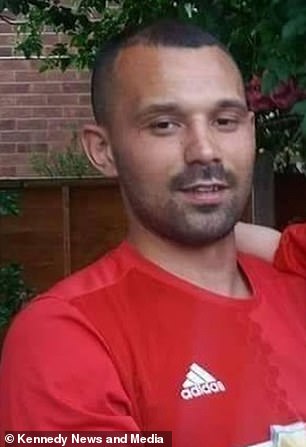 Fugitive Daley Smith (left and right), 29, who once compared himself to Raoul Moat, has pledged to stay on the run until at least Christmas after asking his friends to vote on Facebook

Yesterday, under his Facebook name Daley Palin he bragged about being on the run for 156 days

Cheshire Police has been trying to capture him for a number of months but Smith has been goading them using a number of Facebook profiles.

Yesterday he posted his latest message to his 2,287 followers under the name Daley Palin.

It read: ‘Daley Smiths official day 156 on the run since he ripped his curfew off and said f*** you to the corrupt ****** up Cheshire Police force & justice system…f*** the courts they ain’t getting me in the dock, check the clock, tick tock, tick tock. 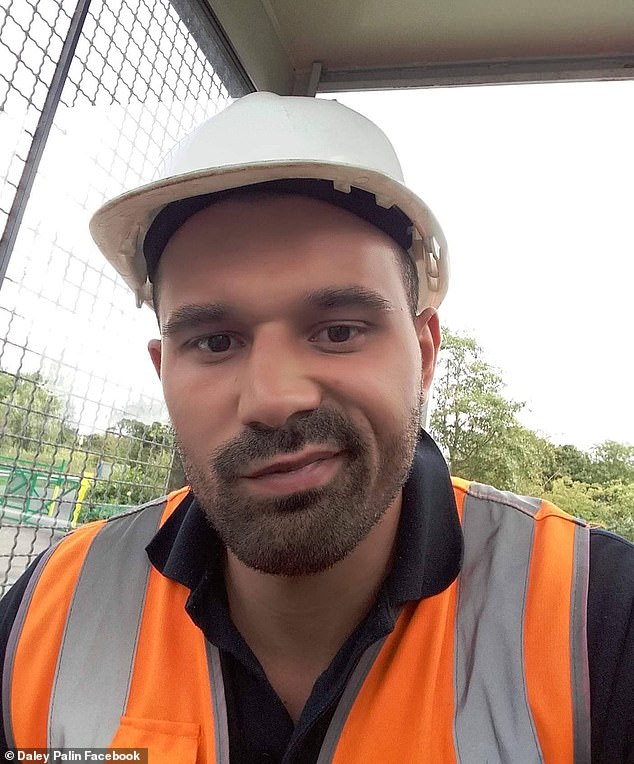 The wanted man was handed a three-month curfew requiring him to be at home between 7pm until 7am from May to August. He has also been charged with possession with intent to supply class B cannabis and concerned with the supply of cocaine, according to police

‘Well not for 44 days anyway. Slight change of plan, (MY) official day 200 falls on Christmas Day, I’ll do my best to get there and then I’m gna set the internet on fire with a big party and then another party for new year.

On November 7, Smith asked his 2,500 Facebook friends to ‘love’ his post if they wanted him to remain at large or ‘like’ it if they think he should hand himself in.

Smith wrote: ‘Anyone that thinks I should hand myself and go to court 5 weeks before Christmas, the day of my trial on the 19th November, just like the post.

‘This will be interesting and will put things into perspective. I don’t need your advice, I know everything any of yas could possibly tell me. Just give me your reaction.’ 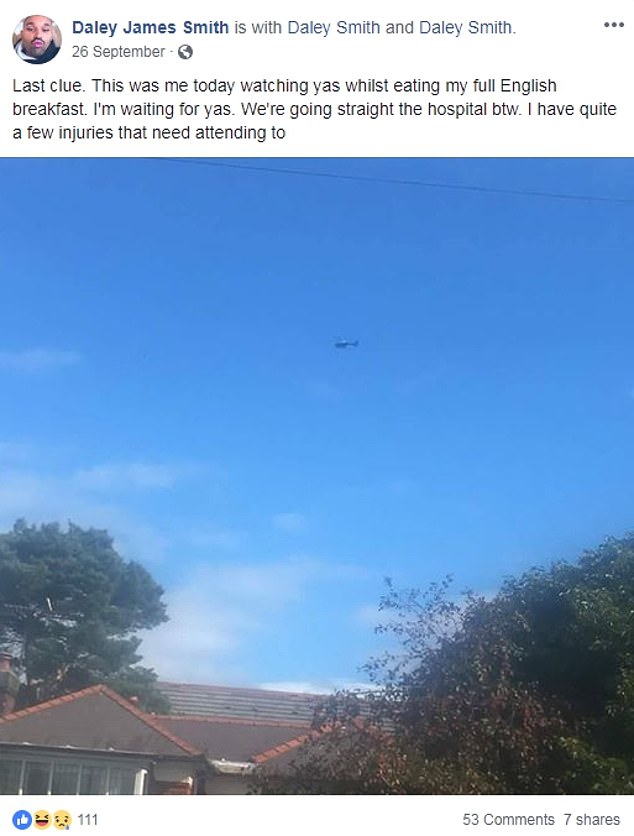 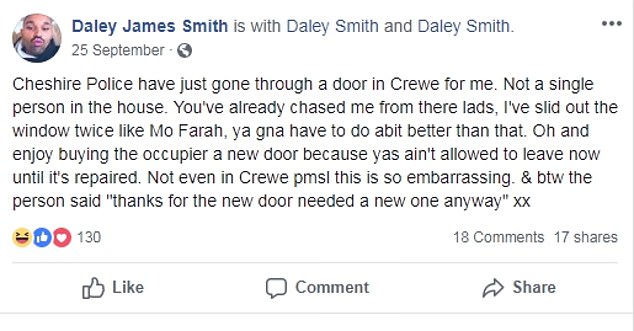 In another Facebook message last month he wrote: ‘Cheshire police have got more chance of finding Madeleine Mcann (sic), I may as well be in Japan, they’ve even been harassing my nan but everything hasn’t gone to plan.

‘They’ve f****d with the wrong man, I feel like Peter Pan. So far I don’t know how far I’ve ran but it’s been mad since this journey began.’

In another post dated on October 17 he wrote: ‘The police’s biggest clue ATM is the activity on my phone as I haven’t even changed my number, they have that number, still can’t catch me. 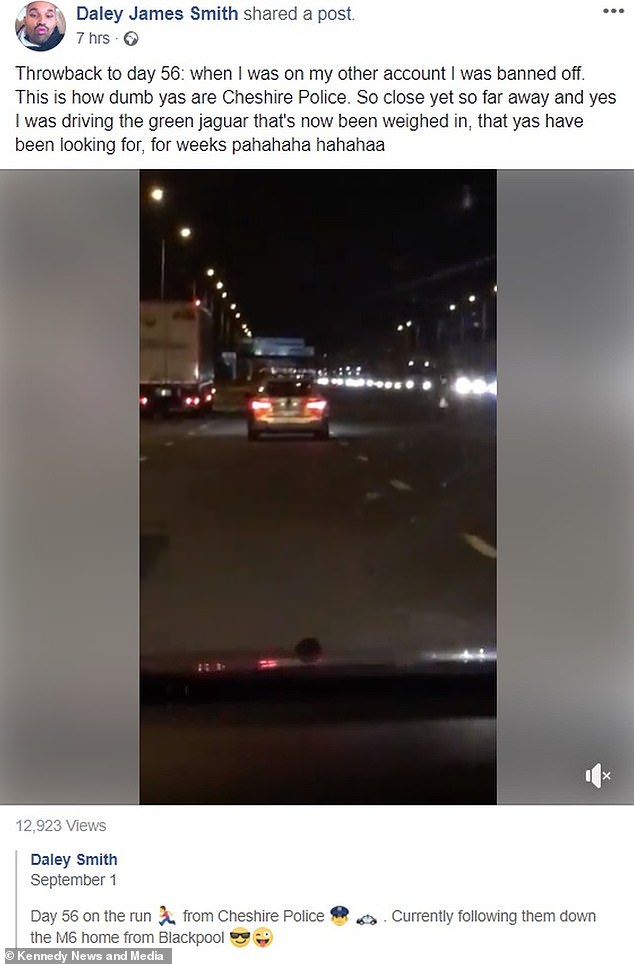 ‘I’ve topped up all over Britain hahaha so everyone hit me up with a text or iMessage and give them work to do. Don’t be ringing though because I only answer my close people.’

In another post, on September 26, he posted a photograph of the force helicopter with the message: ‘Last clue. This was me today watching you eating my full English breakfast. I’m waiting for you. We’re going straight to the hospital btw. I have quite a few injuries that need attending to.’

On September 25 he wrote: ‘Cheshire Police have just gone through a door in Crewe for me.

‘Not a single person in the house. You’ve already chased me from there lads, I’ve slid out the window twice like Mo Farah. You’ve got to do a bit better than that.’ 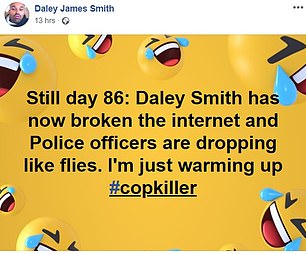 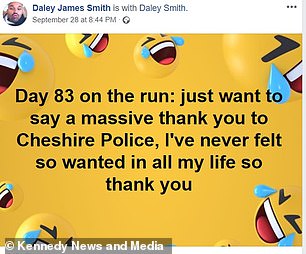 The profile also shared Crewe Police’s Tweet of Smith’s mugshot appealing for the public’s help to find him.

A warrant for his arrest was issued by South Cheshire Magistrates Court on July 24 for breaching a court order in relation to an appearance in court in May over criminal damage.

Smith was handed a three-month curfew requiring him to be at home between 7pm until 7am from May to August.

Smith has also been charged with possession with intent to supply class B cannabis and concerned with the supply of cocaine, according to police.

He is due in crown court this month.

Last month a Cheshire Police spokesman confirmed he was still at large and added, said: ‘We’re appealing for help to trace Daley Smith who is wanted in relation to a breach of court order.

‘We are aware of the Facebook page and are continuing to appeal for information in relation to his whereabouts.’

Anyone with information is asked to call Cheshire Police on 101.