Brazen homeless man builds his own SHED on LA sidewalk, fit with electricity and a flower garden

A brazen homeless man has constructed his own functioning home on Hollywood Boulevard in Los Angeles – complete with an electricity generator and flower garden.

Identifying as ‘Q,’ the man built the shed on wheels by using old planks of wood from construction sites because the city’s temporary housing options are like ‘concentration camps.’

The makeshift home, set up on the public sidewalk, stands on top of car batteries and is decorated by various plants on its exterior.

The wooden eyesore complements other recent structures built by the homeless in LA – including one 10-man tent that featured a running washing machine.

Sagging tents, rusting RVs, and makeshift structures have become commonplace along Hollywood Boulevard to Venice Beach – and even in the shadow of City Hall.

A native of Kansas City, Q has lived in the city for a few years and has been taking shelter inside his sidewalk shed for a few months.

‘There’s probably better places than this, but I don’t think I’m bothering anyone here,’ he said.

Q said he was offered temporary housing but declined, saying he prefers his makeshift home because it ’empowers’ him. Other options make him feel like he would be living in ‘a concentration camp.’

Identifying as ‘Q,’ the man created a makeshift shelter on the sidewalk beside Hollywood Boulevard in Los Angeles 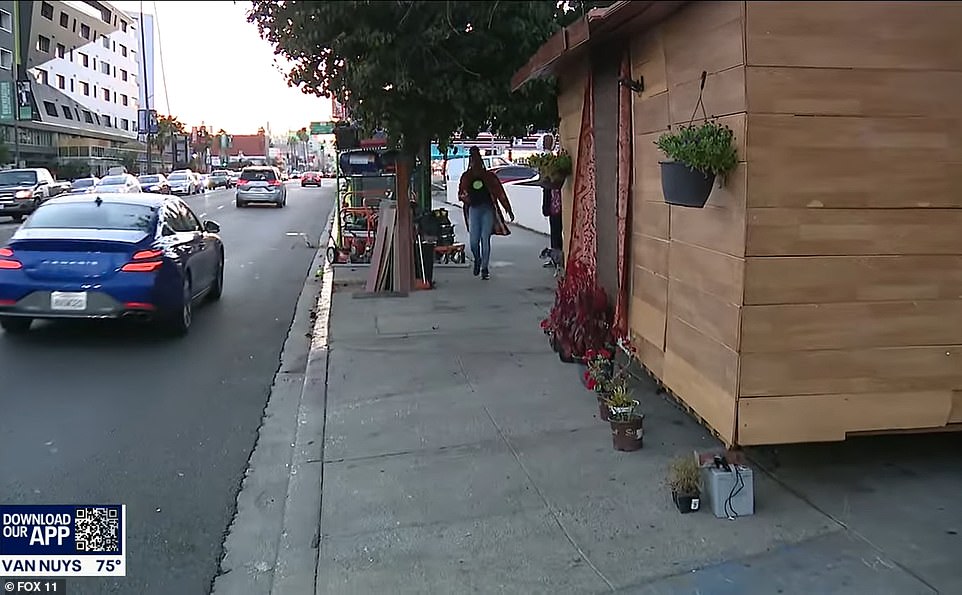 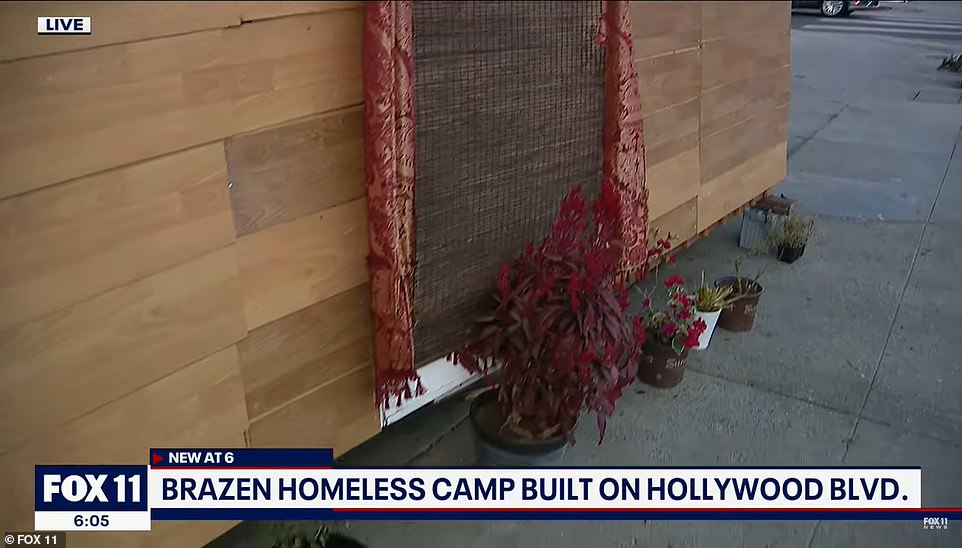 Q currently runs a business out of the home fixing bikes for locals. He plans to be a mechanical engineer and start his own business

The local response to Q’s home has been mixed, as some show empathy toward him while others emphasize his unwarranted residence.

Rance Shaw, who works at City Vibes Coffee across the street from Q’s home, said he does not mind him living there.

‘He hasn’t bothered anyone, and honestly, I’m glad that it’s right there because I feel safer with him there. For some reason – I don’t know why – it feels like he knows what he’s doing and he’s not here to hurt anyone.’

Another man chimed in: ‘It is a little weird out there, but he is safe and he doesn’t have to worry about someone burning his tent down.’

Some added that Q’s situation is indication of the city’s growing homeless population, which has become a dominant issue in an upcoming mayoral election.

Police have told Q to move his shelter previously, which he does by using several dollies

Q said he was offered temporary housing but declined, saying he prefers his makeshift home because it ’empowers’ him

Los Angeles police have approached Q about his home and have continually told him to move the structure – which he does by using several dollies.

An Army veteran, Q describes himself as ‘self-employed’ as he fixes bikes for locals. In the future, he said he wants to be a mechanical engineer and start his own business.

A decision to build the home followed numerous encounters with city sanitation workers who forced him to leave the tent he used to take shelter in.

He says he plans to continue to live in the home despite possible backlash. 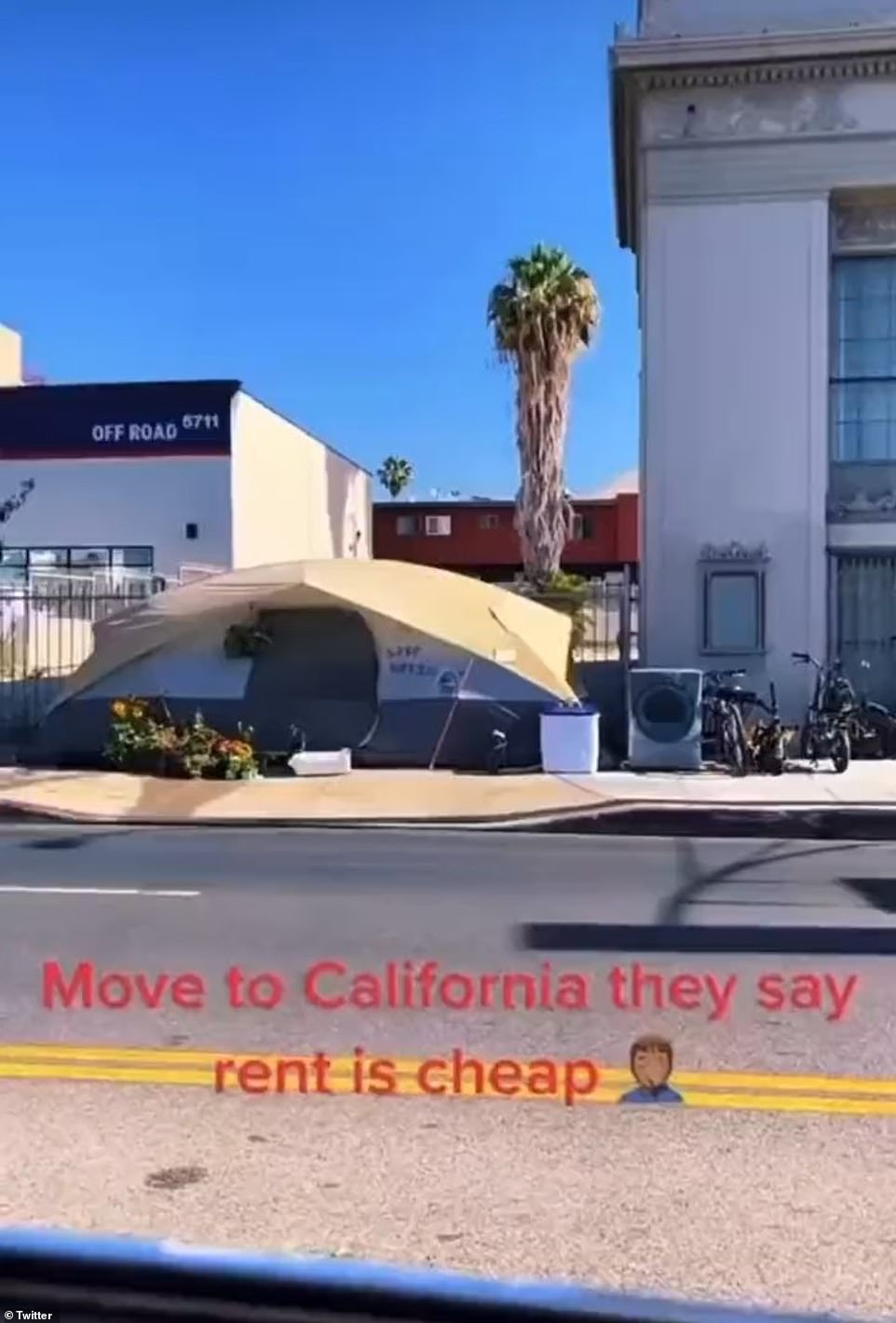 Startling images and video show homeless in Los Angeles syphoning water and power in camps sprouting throughout the city’s streets – with one brazen encampment boasting a working washing machine and a king-size tent, blocking the entrance to a local business

The city’s current crime-ridden state has spurred countless locals and even celebrities to flee the Golden State for a better life, with the most recent being actor Mark Wahlberg, who is fleeing his longtime home in LA in favor for a life in nearby Nevada.

The likes of Elon Musk, Joe Rogan, Ozzy and Sharon Osbourne, and Matt Damon have also participated in the mass exodus – as well as hundreds of thousands of ordinary citizens – citing a combination of over taxes, crime, and the state’s notorious ever-worsening homeless problem.

Moreover, the state recently experienced its first population decline in decades last year, when roughly 250,000 residents were reported to have left the city – many instead electing to buy property in less costly locales such as Texas and Arizona.

Mayoral candidate Rick Caruso has made keeping Hollywood ‘in Hollywood’ a huge point of his campaign – though he appears to be fighting a losing battle to woke progressive Karen Bass.

Caruso is running against Democrat Karen Bass in the November election on a platform of tackling crime, homelessness and bringing an end to a steady stream of ‘career politicians’ such as DA George Gascon, whose ‘soft-on-crime’ policies he says have ruined the city.

Caruso has also criticized the city’s treatment of local businesses, who instead of being rewarded for putting their money into the city, are now faced with aggressive homelessness that likely scares away customers. 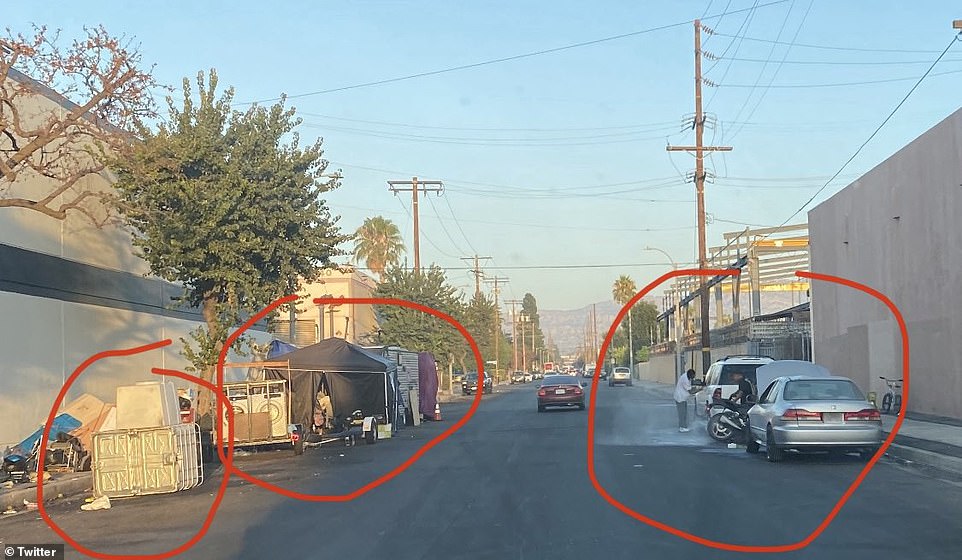 One photo snapped by an awestruck bystander showed one such encampment in Hollywood, where multiple people were seen washing what looked to be their cars and motorcycles with syphoned water from a nearby hydrant. 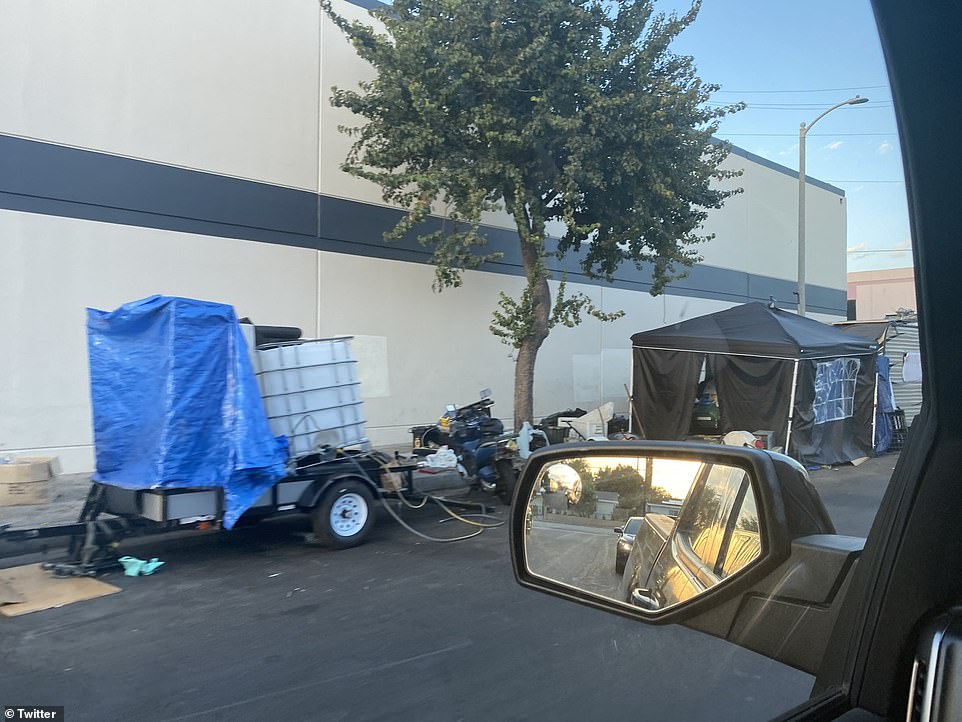 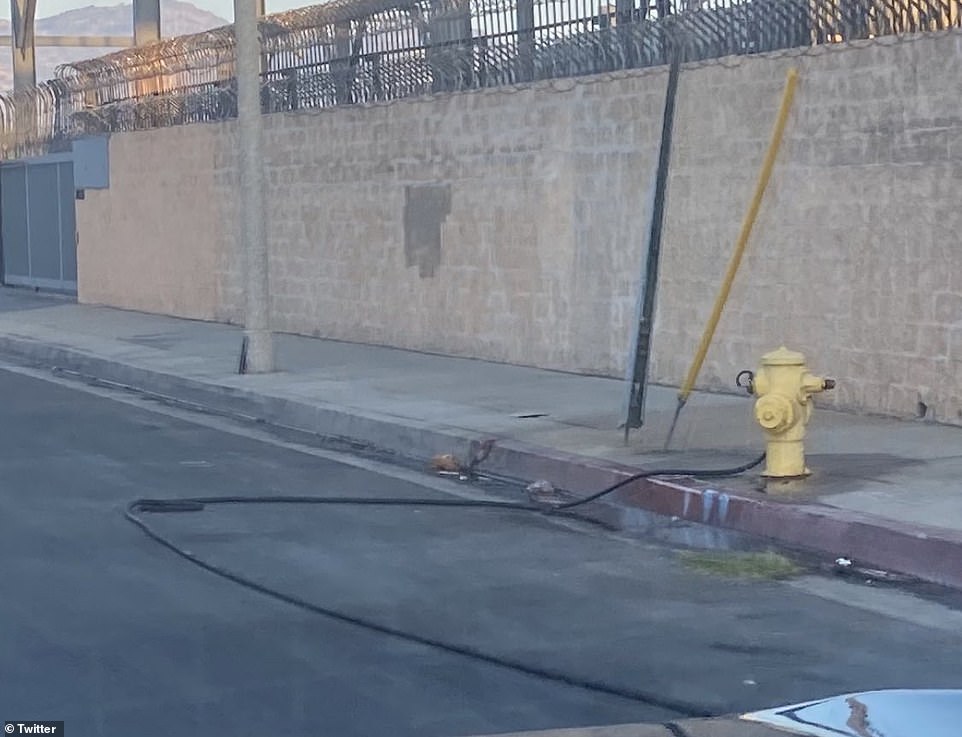 The photos, shared to Twitter by @LeatherJoseph on Monday, show that  the camp’s inhabitants are also stealing water from a city fire hydrant as well as electricity from a nearby street light, to sustain their surprisingly lavish lifestyle

Caruso recently asserted how this is the case with Netflix, which moved its headquarters to Hollywood during the pandemic, only to find homeless encampments outside the office on a regular basis.

He cited how current Mayor Eric Garcetti’s office has so far failed to address that issue, as well as the hundreds of other camps currently operating in plain sight across the city.

‘Look at [Netflix CEO] Ted Sarandos. Here’s a guy who said, “I’m going to make a commitment and have my headquarters actually in Hollywood,” and made a big, incredibly wonderful commitment to the city. And what has the city done?’ Caruso asked during a recent appearance on The Ankler.

‘The city has allowed encampments all around that headquarters.’

He added that such encampments is deterring the city’s professionals from returning to work at the office, slowing the city’s post-pandemic recovery to a virtual standstill.

‘It’s incredible what all of our elected officials have allowed to happen. We’re allowing people to live and die in the streets in their own waste. And then we allow that to happen in front of one of the great companies of Hollywood.’