This is the moment a brazen street salesman makes a spectacular Dele Alli-style dive after deliberately walking into a car.

Footage shows the man, who sells tofu, striding down the middle of the road in the Philippines carrying two large metal buckets.

As a car approach, he purposefully walks into it before hurling himself to the ground in the hope of making a fraudulent injury claim.

He then rolls across the tarmac with a dramatic flourish.

The comical display, reminiscent of footballers who nosedive when trying to earn a penalty, was captured on the dashcam of a car parked up nearby.

Writhing around pretending to be in pain, the silken tofu seller then shuffles out of the road while holding his leg in the air on December 30 last year.

Seemingly fed up of trying to reach the pavement using just his hands and one foot, he clambers to his feet to take the last few steps.

When he sits down, he appears to be nursing his other leg. 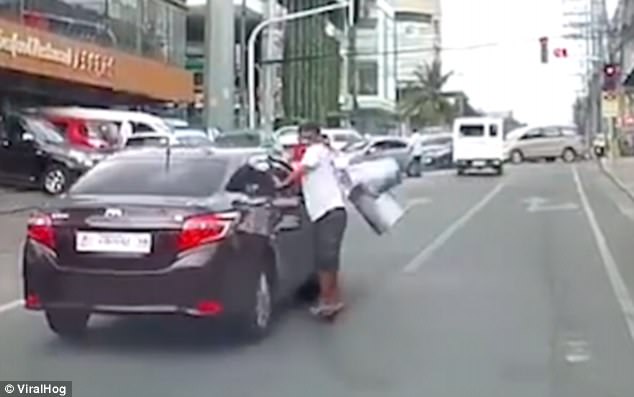 After striding down the middle of the road in the Philippines carrying two large metal buckets, he barges into a moving car coming towards him 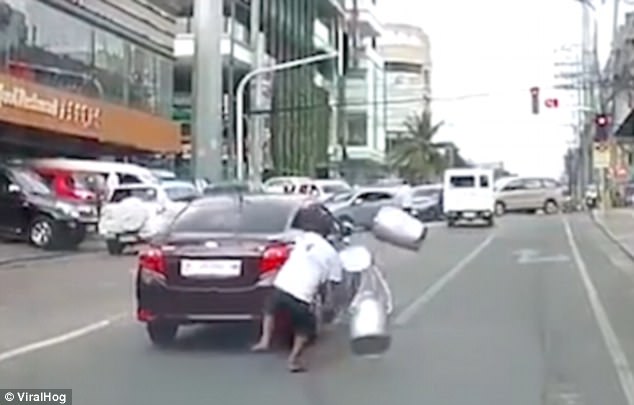 Concerned passersby stop to see if the man is okay and the driver of the car he contacted pulls in with his hazard lights on.

The bemusing video ends with the driver seemingly offering his hand to the man to help him up.

It is not clear whether he received any money as compensation for the incident. 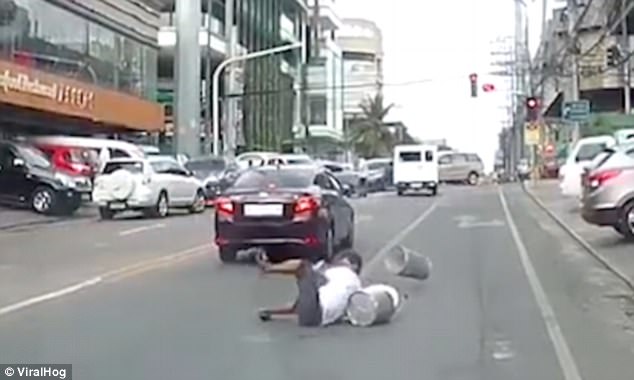 Writhing around pretending to be in pain, he flails his limbs and rolls over three times

After lying on his back for a second, he gingerly shuffles towards the pavement with his leg in the air