Brazil 0-0 Ecuador: Dunga’s side frustrated in their Copa America Centenario opener as Willian limps off after impressive display

The boos rang out at full-time, all around the Rose Bowl.

From the Brazilian fans, for their own team, who had offered a display which summed up the nation’s footballing ills of recent years.

From Ecuador fans, for the officials, who they believed had denied them a huge scalp in their opening Copa America Centenario clash. 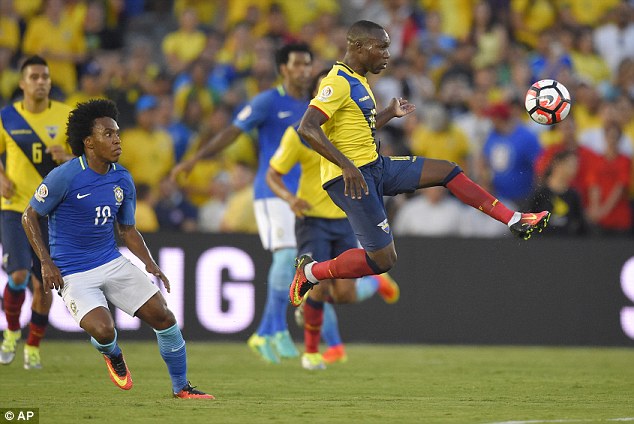 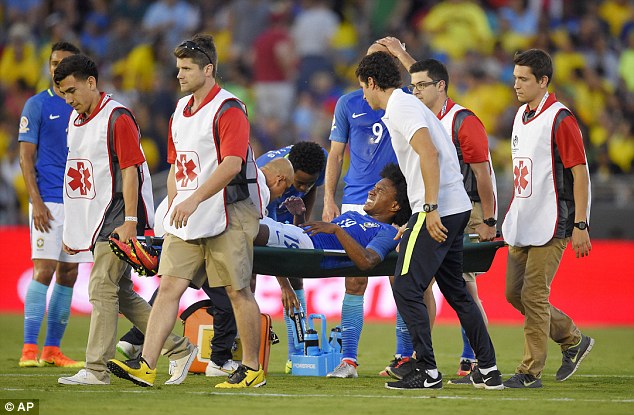 Willian was carried off on a stretcher at one point and while he did return, he was eventually taken off

To cut to the chase, the key moment in this game came in the 66th minute. Miler Bolanos ran down the left flank and crossed the ball just as it hit the goal-line. His low effort was somehow humiliatingly fumbled into his own net by Alisson, who almost had to go out of his way to achieve it.

However, the assistant referee raised his flag and the goal was ruled out, with the officials saying the whole ball crossed the goal-line before Bolanos hit it. No single replay could completely confirm what had happened, but the majority made it seem like a legal goal had been unfairly ruled out.

Ecuador cried robbery, Brazilian fans just cried about what their team has become. They lacked that crucial spark, that something special.

Neymar was sitting in a box, clowning around with Justin Bieber, Lewis Hamilton and Jamie Foxx, unable to help his team after Barcelona forced the Selecao to choose whether to use him at the Copa or the Olympics, not both.

How they cried out for a player like Neymar’s drive, his skill, even his sheer speed. Instead, all they offered was a limp performance.

Dunga was Brazil’s hero at this same venue in Pasadena as he scored their final penalty against Italy before Roberto Baggio missed to hand his team the 1994 World Cup, but this poor showing highlights just how bad things have become under him. 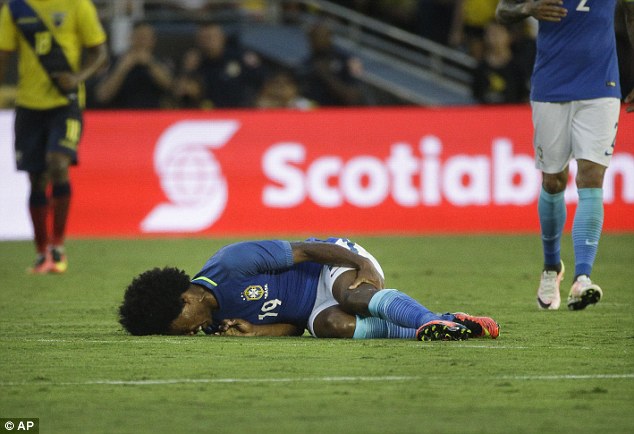 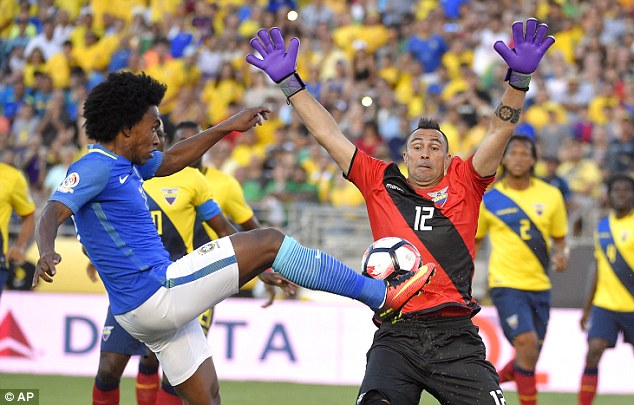 Chelsea winger Willian was the brightest spark by some distance for Brazil but he was withdrawn with 15 minutes to go after being taken off on a stretcher with an injury.

Brazil looked short on ideas, creating a few chances through individual flair and trickery but there seemed to be no overall attacking strategy in place.

Instead, the make-up of the team was rather more defensive, with Real Madrid’s Casemiro and Corinthians man Elias patrolling the middle.

Despite the result, the game started in exciting fashion, with Bolanos whipping a strike inches wide of Alisson’s right-hand post, before at the other end Esteban Dreer made a fine save from Coutinho.

Willian had seared down the right and zipped in a low cross, which the Liverpool midfielder prodded towards goal from close range, but the star’s effort was flicked away by the goalkeeper brilliantly. 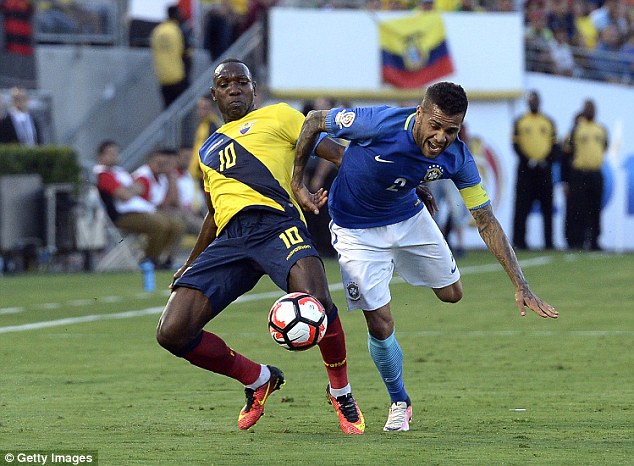 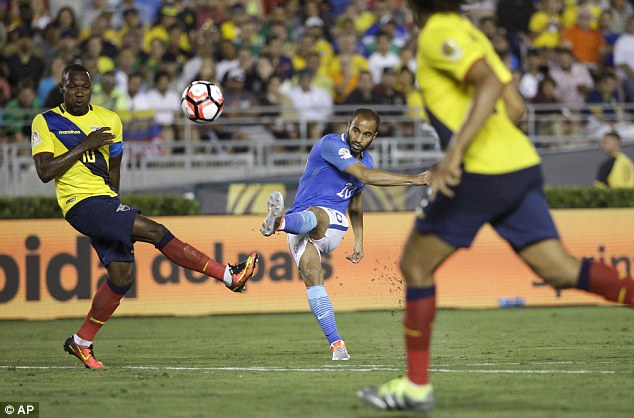 Lucas Moura, who replaced Willian, went close with a late effort on a disappointing night for Brazil

Coutinho went close again soon after, blasting one wide of the top corner in the 17th minute, before Alisson was called into action, tipping a flicked-on free kick away from his goal.

But the longer the game went on, the harder it became for the two sides to create chances, and what started as an open encounter became increasingly attritional.

Elias went into the book for scything down Swansea’s Jefferson Montero as he tried to counter, succinctly summing up what this Brazil side of the previous decade has done to ‘jogo bonito’ (the beautiful game).

Benfica striker Jonas had an effort which was blocked by Gabriel Achiller, but that was his best contribution and he was replaced by Santos starlet Gabriel ‘Gabigol’ Barbosa, but even he was unable to defibrillate a dead second half display from the Selecao. 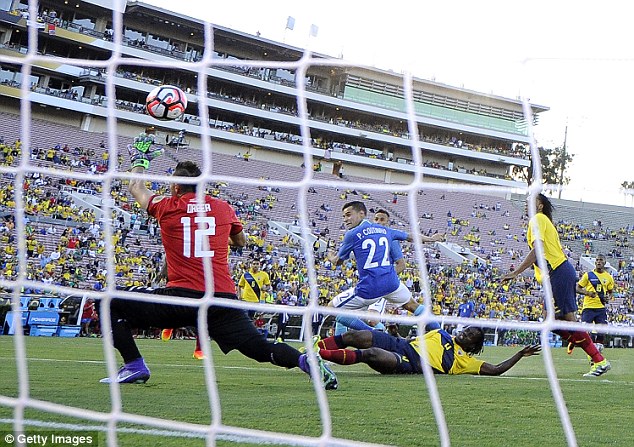 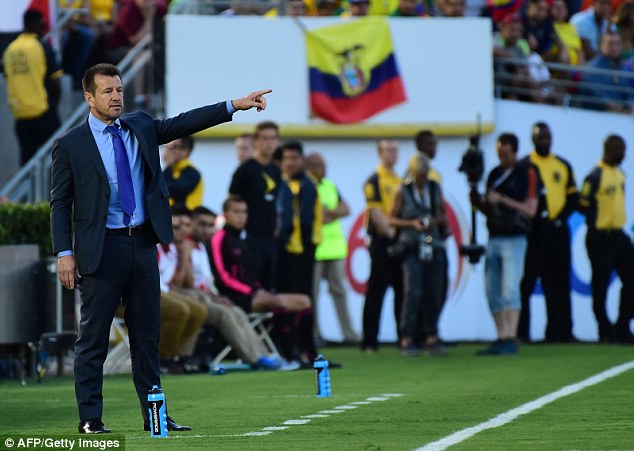 Their best chance came when Lucas Moura directed a header from Renato’s excellent cross just wide of the near post, with the ball bouncing off the advertising hoarding and on to the back of the net, causing some fans to cheer. They should have known better.

Brazil still have clashes against Peru and Haiti to play and the probability is they will make it through Group B, but they shouldn’t be just another team trying to make their way in these kinds of tournaments. They should be blazing the trail – yet they are lost in the wilderness.