Brazil’s quest for a second successive Copa America continued on Friday after Tite’s 10 men resolutely defended their slender 1-0 lead to advance past Chile and into the semi-finals on Friday.

Substitute Lucas Paqueta scored the only goal just seconds before Gabriel Jesus was sent off early in the second half.

Paqueta’s winner to the left corner of Chilean goalkeeper Claudio Bravo in the 46th minute gave Brazil fans some hope that the Selecao would ease into the next stage. 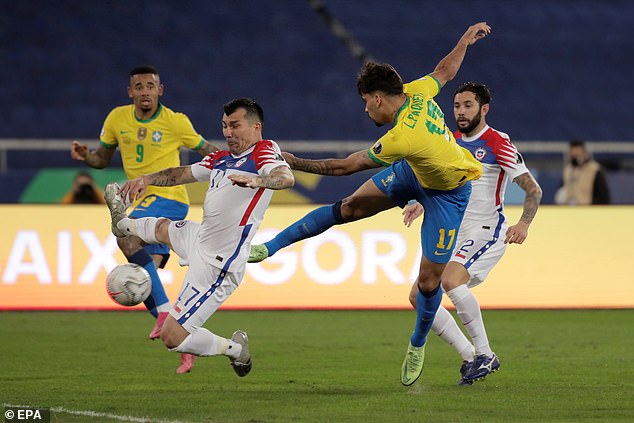 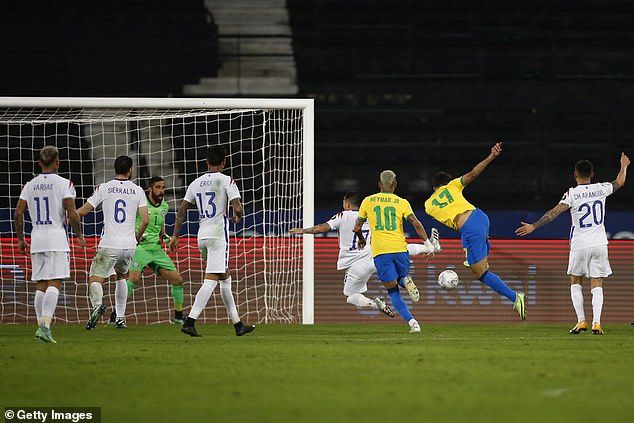 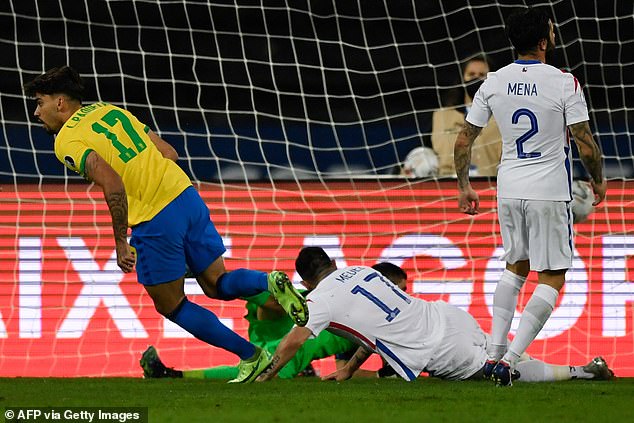 The goal proved to be decisive, with Chile unable to get a goal of their own in Rio de Janeiro

But only two minutes later Jesus was sent off after hitting Chile’s Eugenio Mena with a flying kick.

Neymar and Brazil boss Tite said after the match that Jesus didn’t see Mena and accidentally kicked him as he tried to recover possession in the midfield.

Brazil worked so hard defensively that Chile had fewer shots on goal after Jesus was sent off than during the time he played; two against three.

‘Defending well is a characteristic of ours,’ Brazil’s Thiago Silva said. ‘Regardless of what we did today we concede few goals. Ever down to 10 we created clear opportunities. I am very proud of this team, for its fighting spirit.’ 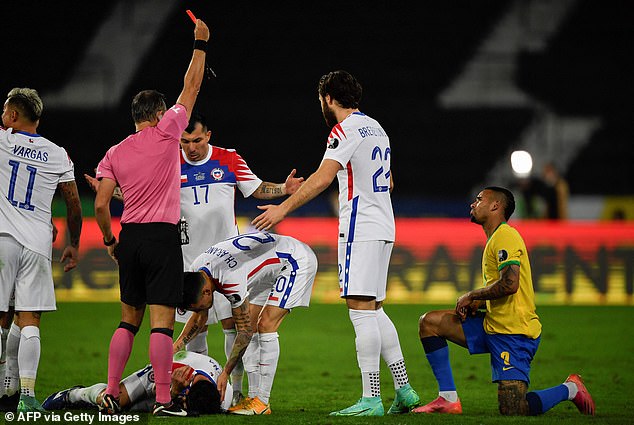 Moments after Paqueta’s strike, Gabriel Jesus (right) was sent off for a dangerous high boot 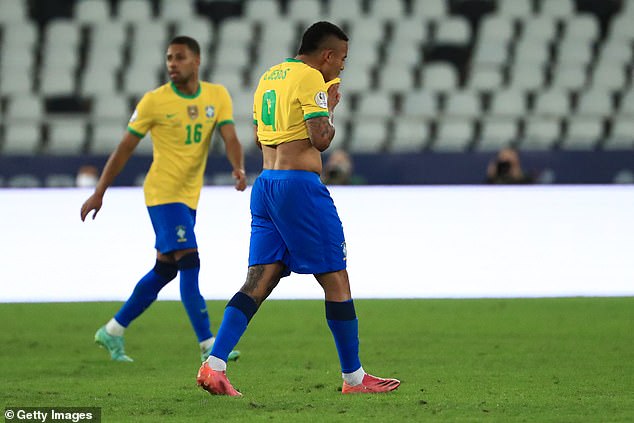 Paqueta came onto the pitch after a tense first half with few opportunities for both sides. He replaced Roberto Firmino.

Brazil didn’t stop threatening Chile with Neymar’s dribbles and quick counter-attacks. But Chile was much closer to the equalizer; it had an Eduardo Vargas goal disallowed for offside and English-Chilean Ben Brereton hit the bar with a header in the 68th minute.

An exhausted Neymar said after the match that playing with 10 men was a great test for Brazil. He was not close to scoring as in other Copa America matches, but he was key by holding possession.

‘Every match we need to get some tests to make us stronger, show we can do it in every circumstance,’ Neymar said. ‘We had to stand together. It was very hard to do it.’ 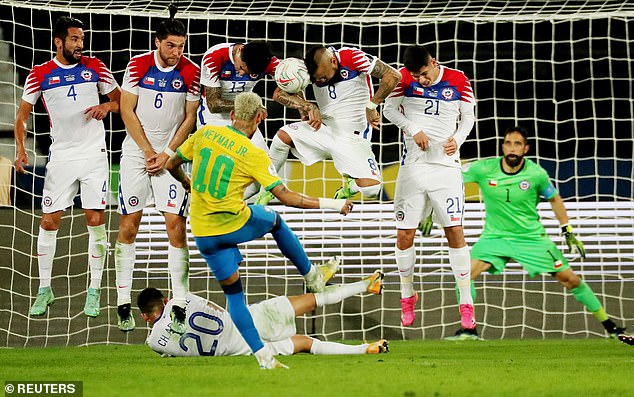 Chile’s Arturo Vidal said his team will leave the tournament with some pride.

‘We lost to a great team, a favorite which is playing at home,’ he said. ‘If we play like we played today, with some more time to work, this team will clearly have its intensity back. We hope to qualify to the World Cup. It will be hard, but we can.’

Peru advanced to the semi-final after beating Paraguay on penalties 4-3 after a 3-3 score in regular time, in the most thrilling Copa America match yet.

Brazil and Peru played the latest Copa America final in 2019, with the hosts winning 3-1. Jesus was also sent off in that match at Rio’s Maracana Stadium. Monday’s encounter will be at the same Nilton Santos Stadium where Brazil beat Chile. 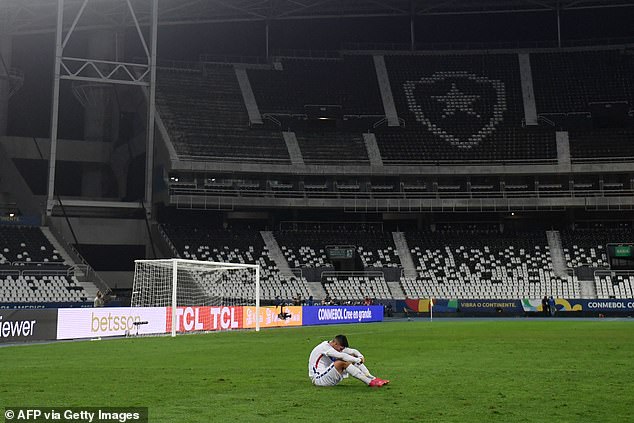 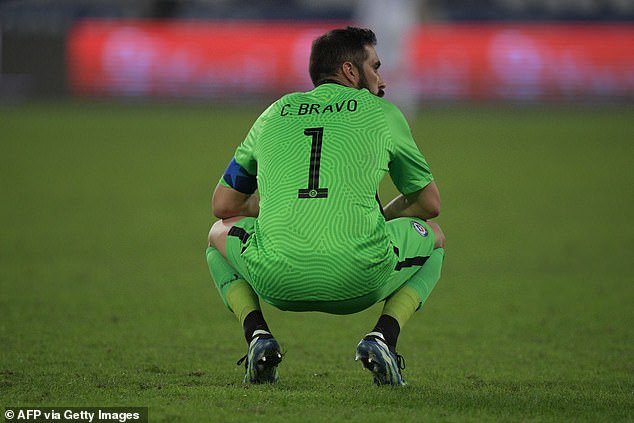 Tite, who was recently fined by South American soccer body CONMEBOL for criticising the tournament’s organisation, once more criticised the quality of the Nilton Santos pitch, despite minor improvements made recently.

‘If I were watching from home I would say this could have been a good match, and look what it is… Ederson had difficulties to take goal kicks,’ Tite said. ‘Please, be responsible. I recognise people are trying to improve the pitch, but find a better pitch for us to play.’

The Copa America final will be played at the Maracana Stadium on July 10.