Brazilian midfielder Willian has been ruled out of Sunday’s Copa America final against Peru due to a thigh injury.

The Chelsea star felt pain in his right thigh during the second half of Tuesday’s 2-0 semi-final victory against Argentina.

He stayed on the pitch, however, as manager Tite has already used all three of his substitutions.

And he has paid the price, Brazil confirming on Thursday that the 30-year-old will miss this weekend’s showpiece at the Maracana.

Willian, who will remain with the team at their training base ahead of the final, scored Brazil’s final goal in their 5-0 drubbing of Peru in the group stage and scored in their penalty shoot-out victory over Paraguay in the quarter-finals.

He was brought on for winger Everton at half-time in his side’s win over Argentina in the last four and tests on Wednesday revealed he had sustained a muscle injury.

Willian was a late replacement in the squad for Neymar, who was forced to miss the tournament in his home country after sustaining an ankle injury in a friendly against Qatar in June.

He is Brazil’s only absentee for the final against Peru, where the five-time World Cup winners will be eyeing their first major trophy since lifting the 2007 Copa America. 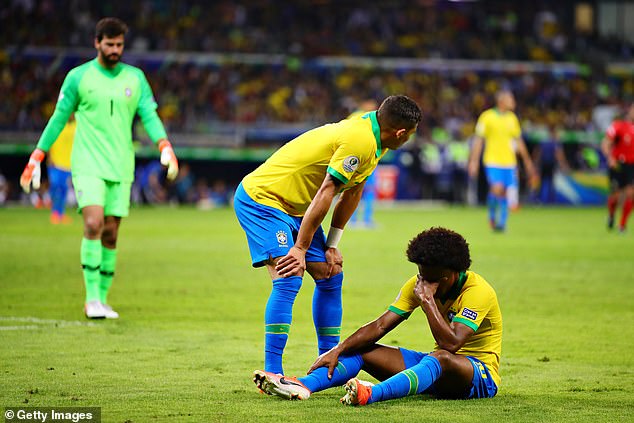