A Brazilian diver who split from her synchronised partner at the Rio Olympics after kicking her out of her room so she could have sex with a canoeist has broken her three-year silence over the ordeal to admit the romp.

Ingrid Oliveira, then 20, was reported to have banished 19-year-old partner Giovanna Pedroso from their Olympic Village room for a ‘marathon sex session’ with fellow athlete Pedro Goncalves.

The female pair went on to finish last in the women’s 10-metre synchronised platform dive in a performance described as ‘pathetic’ by local media, leading to a row which ended with their break-up. 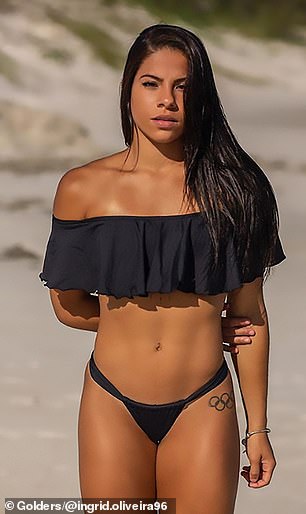 Ingrid Oliveira, 22 (left and right), has spoken out for the first time since she split from synchronised diving partner Giovanna Pedroso following a tryst at the Rio Olympics 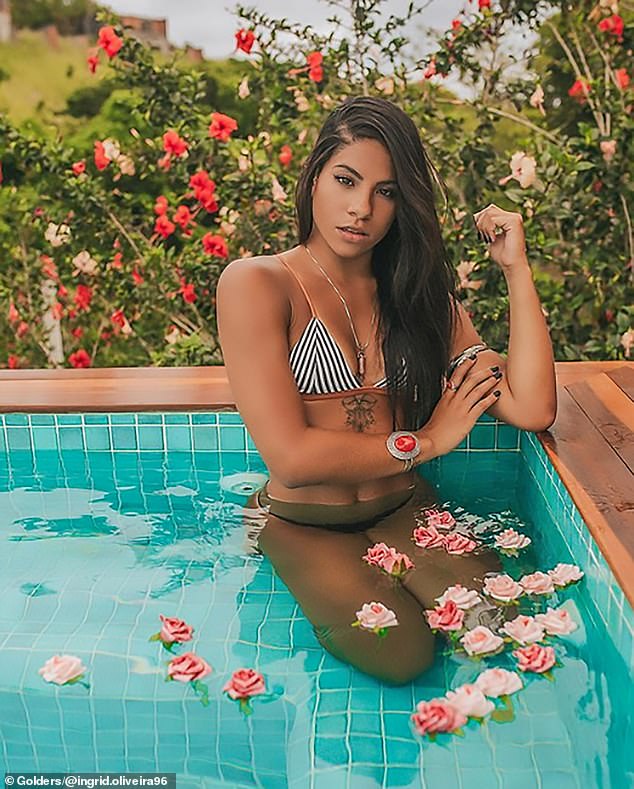 Ingrid (pictured) admitted sleeping with canoeist Pedro Goncalves at the games, but denied kicking Giovanna out of her room to do so, and said the backlash she received was ‘sexist’ 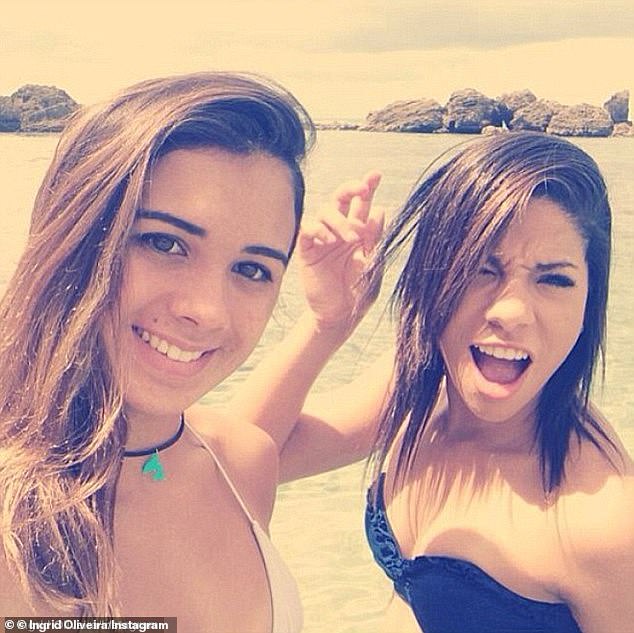 Giovanna (left) and Ingrid (right) finished last in the women’s 10-metre synchronised platform dive in Rio in a performance described as ‘pathetic’ in local media, and split afterwards

Ingrid has now spoken out to admit she had sex with Goncalves and acknowledge that she made a mistake.

But she insists she never kicked her diving partner out of their room and claimed she was one of many athletes who had romped during top-level competitions.

She also revealed she was bombarded with pornography by trolls and offers to star in sex films after she made headlines with her tryst.

The 22-year-old, currently training for the 2020 Tokyo Olympics, told sports website UOL Esporte: ‘I took Pedro to my room but it wasn’t the day before my dive as has been reported or the day before his competition.

‘He didn’t spend the night with me and I didn’t banish anyone from the room. People don’t know, but in the Olympics it’s normal.

‘You should have seen the number of condoms that were distributed in the Olympic Village. They were everywhere including the canteen and they weren’t there for people to make balloons.

‘Usain Bolt took a girl without a pass to his room and people created Tinder accounts so they could flirt. Those cases weren’t reported.’ 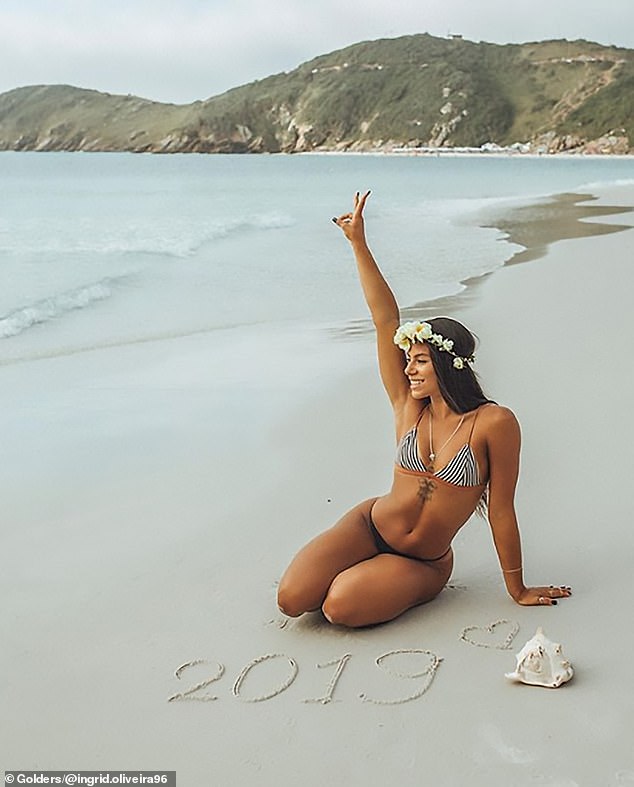 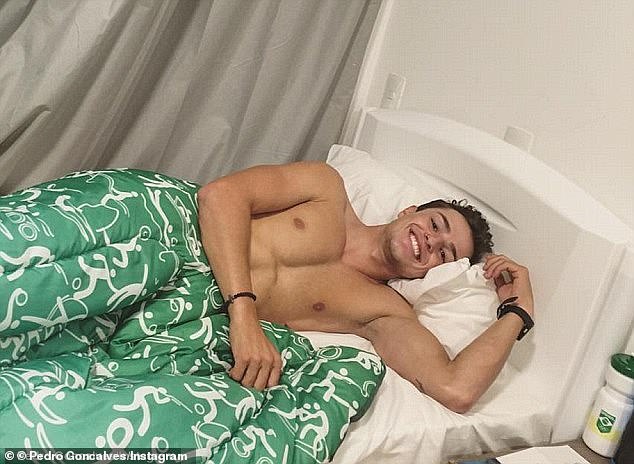 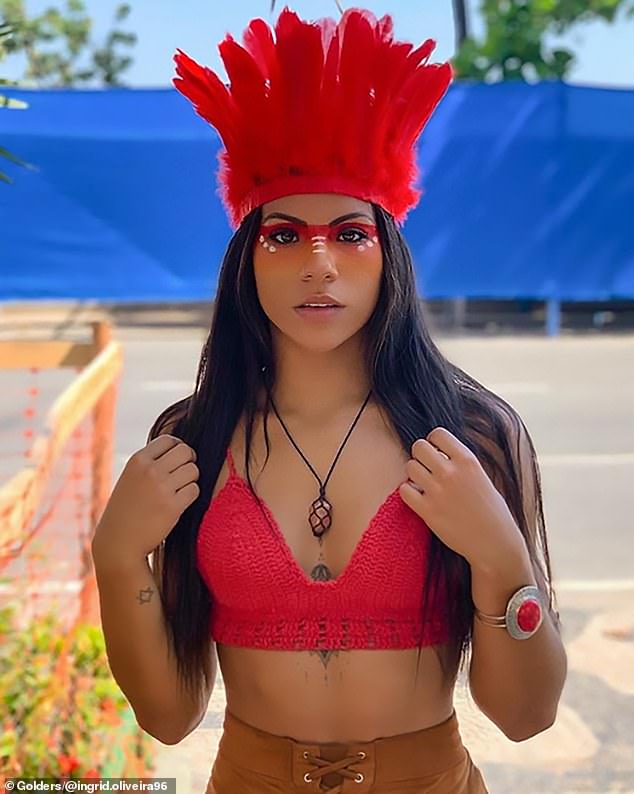 Ingrid said it is very common for athletes in the Olympic Village to have sex with each other, and said Goncalves never received the amount of negative attention that she did

Revealing she had started talking to Goncalves on social media at the 2015 Pan American Games in Toronto before meeting him in person at the Rio Olympics, she added: ‘He’s good-looking and it’s not just me who thought that.

‘People meet once, twice. Before the opening ceremony I talked to Giovanna who I was sharing a room with and said I was going to take him there. She let me.

‘It wasn’t something only I did. She and a lot of others also did the same thing in several competitions. I never imagined the fallout it would cause.’

Oliveira said she felt ‘horrible’ in the days after the tryst became public, but insisted that sexism lay behind much of the criticism.

She added: ‘What I did was wrong and I am aware of that. I tortured myself a lot.

‘But the treatment I received was totally unjust and the story was completely distorted.

‘I received pornography. I received proposals to do sex programmes, not TV programmes. And I lost work. I was attacked around the world.

‘On Wikipedia I was described as the girl who does pole-vault. Stories were written about me that never happened. It was all because I’m a woman who had sex. 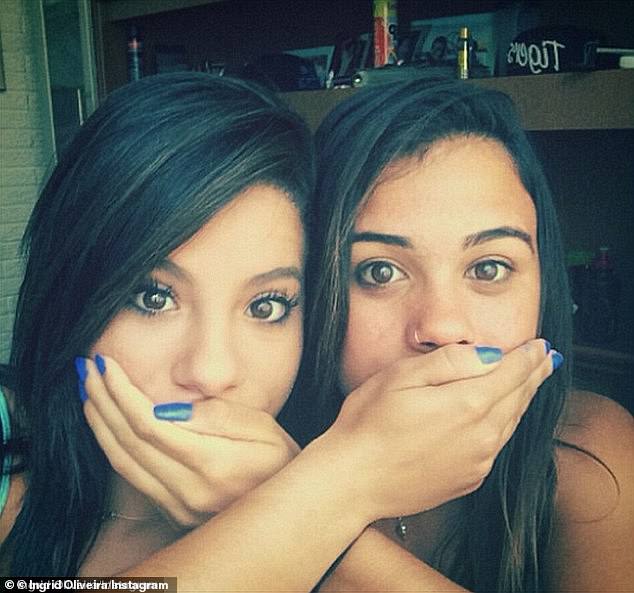 Ingrid (left) said she felt ‘horrible’ as news of her lovemaking spread and acknowledged she made a mistake, but said Giovanna (right) ha given her permission to sleep with Goncalves 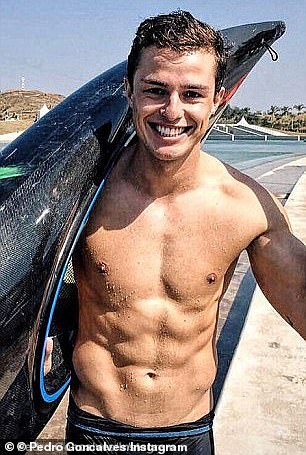 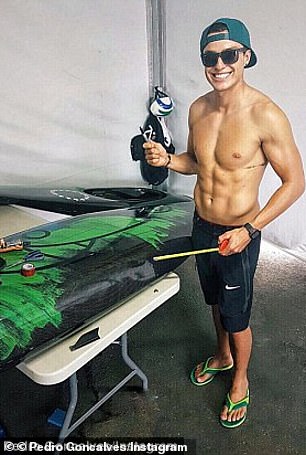 Ingrid said that while she was bombarded with harassment and abuse, Goncalves got messages on his Instagram like: ‘Congratulations, what a star!’ 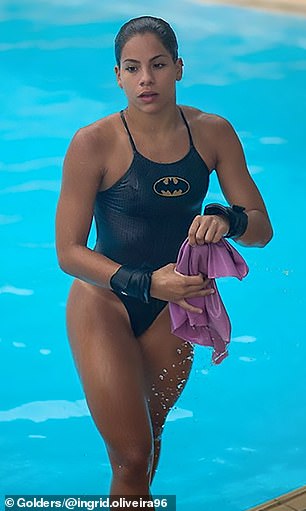 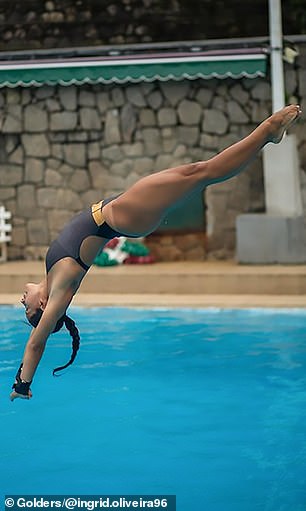 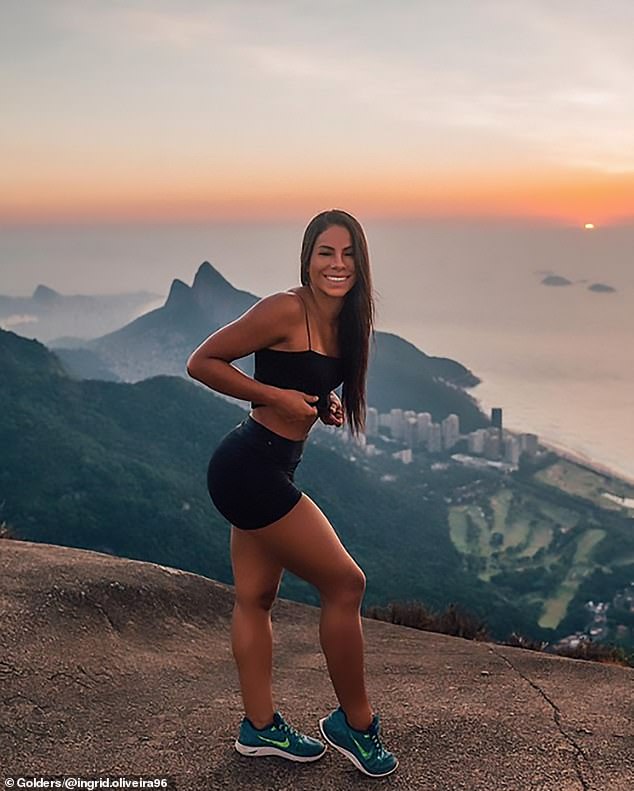 Ingrid also denied taking Goncalves to her room the night before she was due to dive, saying it happened at another time

‘I looked at Pedro’s Instagram afterwards and there were no insults but comments like: “Congratulations, what a star!”

‘On my Instagram, as well as a lot of insults, there were some very disgusting things written, without going into the number of naked photos I was messaged.

‘One even asked me, “How much would you charge to have sex with me?” It made me furious. It was ridiculous.’

Giovanna Pedroso’s mum Maria Stella admitted after Ingrid’s Olympic romp went public that the two divers were like sisters who were ‘constantly fighting.’

She said: ‘Just like any two girls who spend a lot of time together, Giovanna and Ingrid fall out a lot.

‘It was just unfortunate that they had a tiff during the Olympics of all times.’

She was quoted at the time as saying: ‘I hope they get back together soon so Ingrid can come to visit me again here in my house.

‘She often comes to stay when the two are on good terms. I’ve come to see her as my own daughter.’ 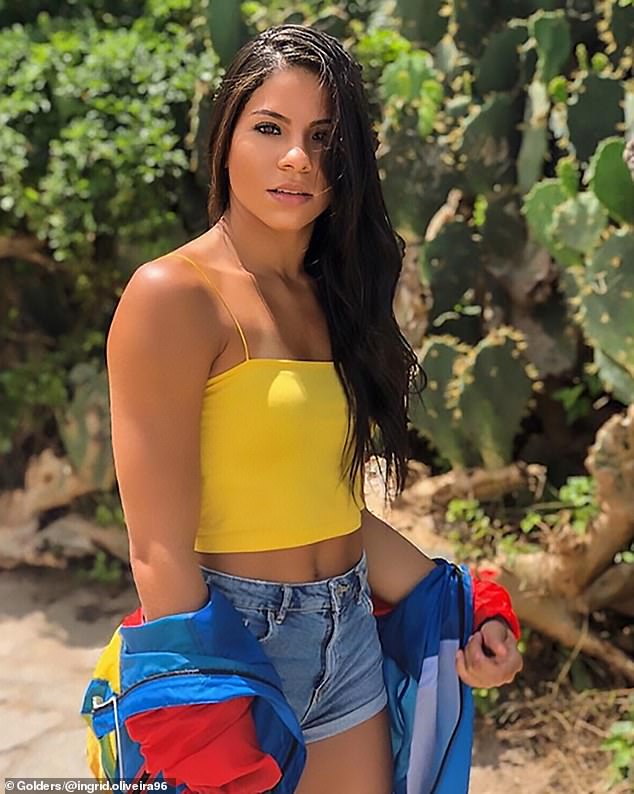 Giovanna and Ingrid (pictured) bickered a lot before the Olympics, according to her mother, but never seriously 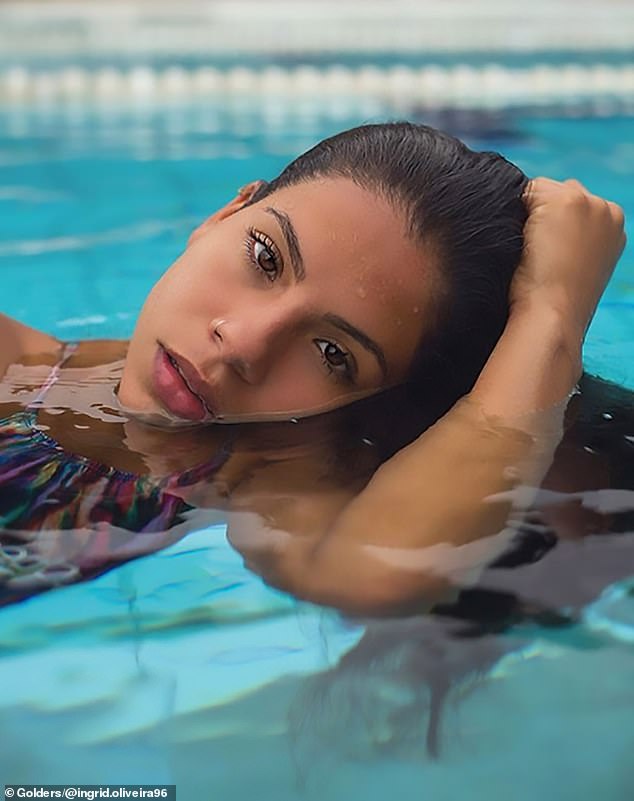 Ingrid has not spoken about the scandal for three years, but has now opened up about it as she prepares for the Tokyo Olympics next year