Tragedy as Brazilian mother-of-one, 33, dies as police investigate whether her ex-lover stabbed her to death in a jealous rage

A Brazilian mum-of-one who was stabbed to death by an intruder in a western Sydney home may have been attacked by an ex-lover.

Daiane Pelegrini, 33, was found with significant injuries inside an apartment block in Ingleby Street, Oatlands at about 4.50pm on Monday.

Ms Pelegrini was rushed to Westmead Hospital in a critical condition but died a short time later.

A 25-year-old man was arrested at the scene and taken to Granville Police Station.

Ms Pelegrini, who moved to Australia from Brazil with her husband at the end of 2016, was allegedly stabbed when she arrived home with her boyfriend to pick up something.

The 25-year-old man assisting police with their inquiries is understood to have briefly dated Ms Pelegrini before a recent split, The Daily Telegraph reported. 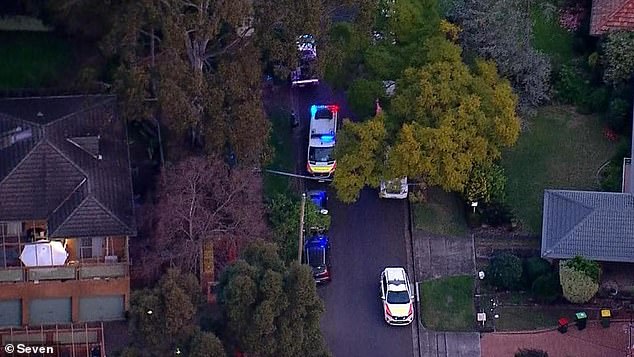 Multiple emergency services were called to an apartment block in Ingleby Street, Oatlands at about 4.50pm on Monday

‘Jesus receive Daiane Pelegrini, with all affection. I have no words to express my sadness,’ she wrote.

Ms Pelegrini was undertaking a Bachelor of Nursing at Western Sydney University and last year wrote on Facebook she had ‘waited so long’ to commence her studies.