An armed robber has been shot dead by cops in Brazil after allegedly stealing from a jewellery store and taking an elderly woman hostage.

The dramatic scenes, caught on several eyewitness videos which have been handed into police as evidence, unfolded on Wednesday morning in Valencia city centre, south east Brazil.

Images show the tense moment the bandit is surrounded by officers who train their guns on him as he points his weapon at the pensioner’s head and drags her with him down a road. 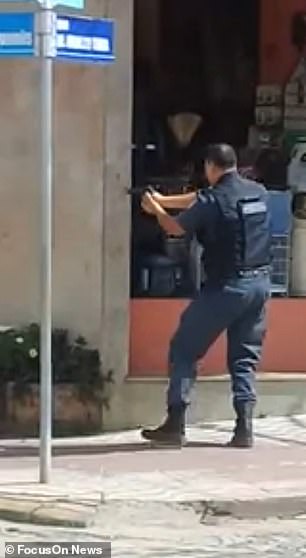 The suspect, who has not been identified, was armed with a loaded .38 calibre revolver, and had reportedly just looted the Barra Joias shop. With his backpack allegedly full of the goods he tried to flee towards a marketplace in a bid to escape.

The store owner’s screams for help alerted a passing police car and officers reacted quickly, jumping out of their vehicle and pursuing, then surrounding the would be robber as he ran down the main road.

Apparently, when he realised he was cornered the thug grabbed hold of 83-year-old Tereza de Jesus Sacramento, who happened to be walking past. He proceeded to use her as a human shield. 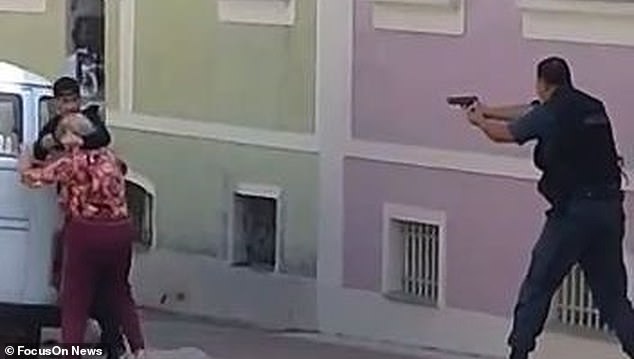 A second officer approaches from the other side of the van as the woman falls in the street, exposing the robber for the fatal shot

Horrified onlookers shouted ‘let her go’, ‘think of what you’re doing’ as the assailant began to edge his way long the pavement still gripping the elderly woman. When he failed to respond to the appeals to surrender others urged officers to ‘shoot him’.

By this time, the abductor had moved his arm from around the victim’s waist, to holding the petrified woman in a brutal neck lock.

Footage shows the armed robber, who appears uncertain as to where to go, keeping an eye on the armed officers who are stalking his every move, as he furtively looks for an escape route.

Cops said they ordered the kidnapper to let the woman go and to hand himself in along with his weapon, but he reportedly refused to give himself up or release his hostage.

The situation was critical, detectives said, because the cornered gangster started to manhandle the frail woman and with the loaded weapon at her head anything could have triggered her fatality.

She appears to succumb to his rough treatment and callous demands but is obviously distressed.

Suddenly the suspect stops with his victim by a white Volkswagen Kombi and changes direction, walking into the road behind the vehicle.

The reason for his decision soon becomes clear. 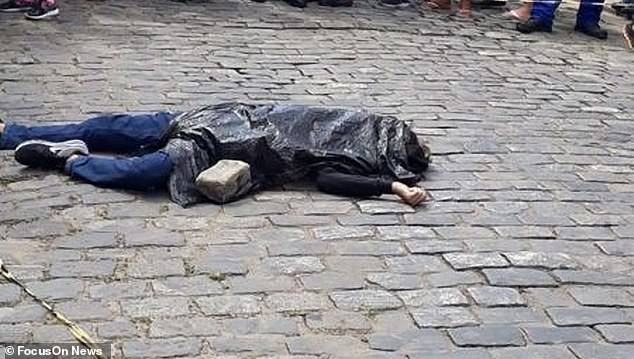 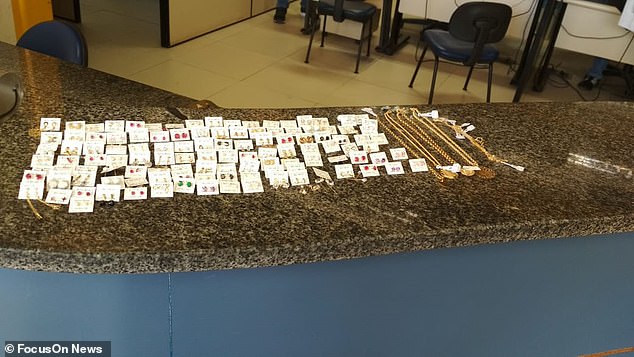 Loot: The robber grabbed jewellery worth around £8,000 from the shop in a bag, but police were waiting outside when he tried to get away

He has spotted another armed officer who is approaching him from the other side but who is hidden from observers because he has been behind the parked cars.

As the kidnapper steps off the pavement, the victim stumbles and falls to the ground.

Her unexpected collapse gives a split second window of opportunity to the closest officer who suddenly appears around the front of the Kombi having outflanked the alleged hostage taker.

The thug bends down to apparently pull the fallen woman up to a standing position, but he is now exposed and a clear target for the armed cops.

Although it isn’t shown in the video, detectives reported the gunman fired first at officers who shot back in self-defence.

The sound of a hail of bullets rings out and subsequent images show the assailant lying on the ground. 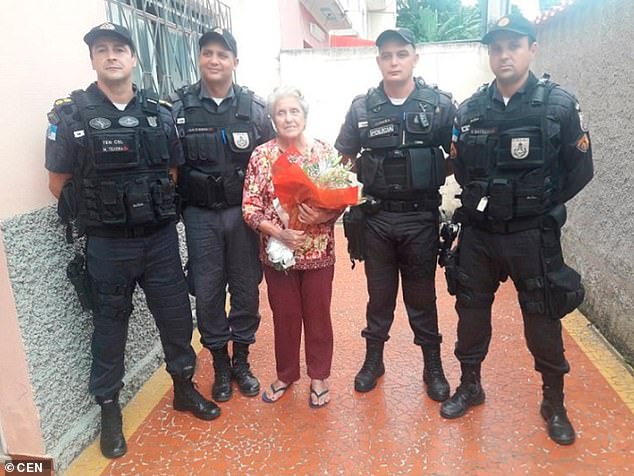 Tereza de Jesus Sacramento, 83, with police officers after her rescue from the jewellery store robber who took her hostage

He died on the spot from his bullet wounds and to cheers, whistles and applause from enraged eye witnesses who supported police taking lethal action to end the crisis.

Police chief colonel Antonio Matos of the South Fluminense Police Battalion said to local media: ‘Guidance was given to the suspect to release the hostage, give up the weapon and surrender. However he refused to obey and ended up being killed.

‘The most important outcome was that (Mrs Sacramento) was saved.’

Investigators reported the assailant announced his assault as soon as he entered the shop. While he was loading jewellery into his backpack, the owner ran out of the store and was in the process of calling police when a squad car drove past.

Mrs Sacramento escaped unharmed but received medical attention at the Escola hospital to ensure she was not suffering from shock or at risk of a stroke or heart attack. She is said to be still undergoing medical tests.

Colonel Matos praised his officers calling them ‘courageous and heroic’.

‘They are to be commended because they were willing to risk their lives,’ he said.

Police reported that the victim will be given support to overcome the psychological trauma and will be called to testify in court at a later date.