A woman was violently beaten for four hours on her first dinner date with a man she met online, Brazilian police claim.

Elaine Caparroz, 57, was allegedly subjected to the sustained attack by Vinicius Serra, 27, in her apartment in Rio de Janeiro.

The victim suffered multiple fractures to her face, including a broken nose, severe damage to the orbital bones around her eyes, lost teeth and injuries inside her mouth that needed over 40 stitches.

The businesswoman was punched, kicked and bitten on her arms and legs as she tried to protect herself and escape her aggressor.

Harrowing footage of the aftermath of the assault, which started around 1am on Saturday 16 and lasted until 5:30am, shows the flat in complete disarray with damaged furniture and blood smeared walls and floor, indicating that the victim was dragged around the flat during the attack.

Neighbours intervened when they heard her desperate screams for help and alerted the building’s security guards. 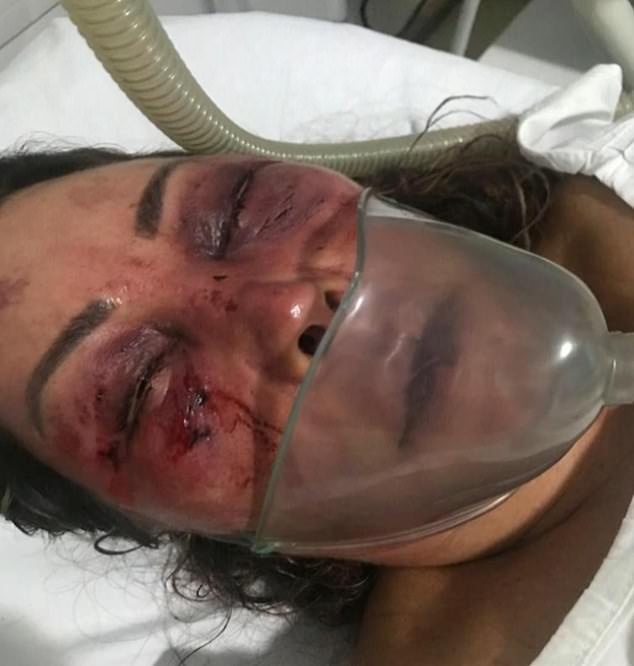 She suffered multiple fractures to her face, including a broken nose, severe damage to the orbital bones around her eyes, lost teeth and injuries inside her mouth that needed over 40 stitches.

The agents broke into the flat but the suspect tried to flee the scene. However, all the exits had already been locked by the guards who managed to overpower and detain the assailant until police arrived.

When guards entered the apartment, they found the seriously injured victim lying on the floor with blood splattered throughout the rooms.

Ms Caparroz, who owns a landscaping business, revealed she invited Serra, a law student, for dinner last Friday. It was the first time they had met after eight months of chatting on social media.

She said: ‘We talked online for a long time and I thought our friendship would evolve into something really good. When I invited him to my apartment, I felt confident and comfortable in doing so. I believed I knew him from our conversations.’

According to the victim the horrific attack began after the pair slept together. She claimed Serra suggested they ‘cuddle up’ and told her to: ‘Lie on my shoulder so that we can sleep wrapped up together.’

She agreed but hours later she was woken up by the brutal assault. 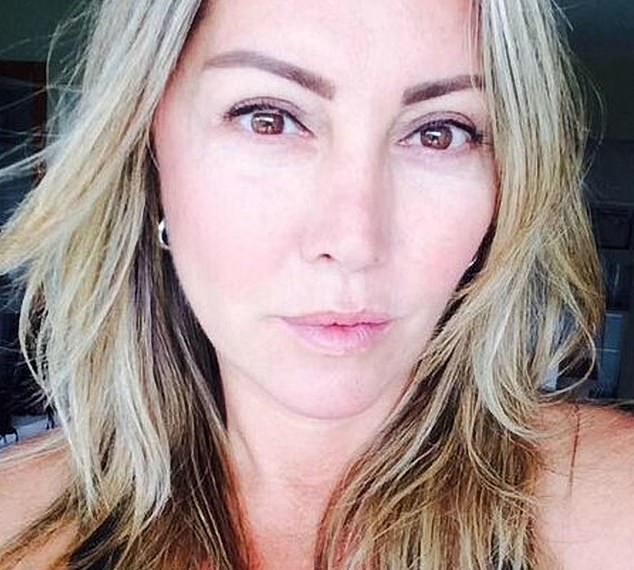 She claimed: ‘I woke up with him punching me in the face. I raised my arms to protect myself but he bit me on my arms.

Under police questioning, Serra claimed that he had drunk a lot of wine and then fallen asleep. He reportedly told officers he freaked out when he woke up and suffered ‘a psychotic outbreak’ which ‘forced’ him to ‘hit Elaine for four hours’.

Detective Adriana Belém to FocusOn News: ‘We believed this is a case of attempted femicide. We still do not know the motivation for the crime and we are working on piecing the facts together.

‘The aggression lasted for over four hours which leads us to believe the attack was premeditated. I find it inconceivable that he had a psychotic outbreak but he has already claimed that he doesn’t remember anything.’ 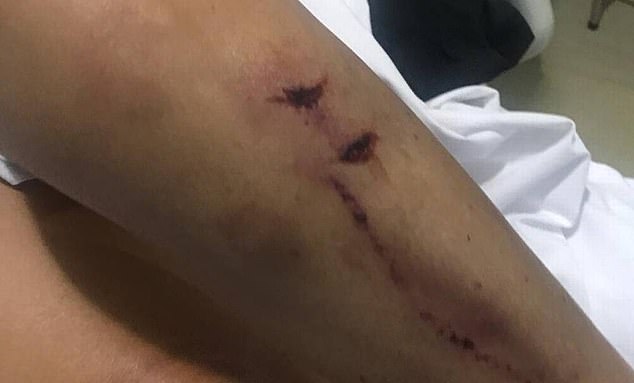 When she tried to defend herself by putting up her arms, it is alleged that Vinicius Serra bit her before continuing a four-hour assault

According to investigators, Serra apparently tried to disguise who he was when he arrived at the condominium. He allegedly gave the doorman a false name, identifying himself as Felipe. This was registered in the visitor’s book.

Speaking from her hospital bed, the victim recalled the attack in harrowing detail.

She said: ‘He tried to put me in a strangle hold. I put my hands up to prevent him from completing the move, but then he bit me on my arms. He was on top of me and he kept punching me again and again. 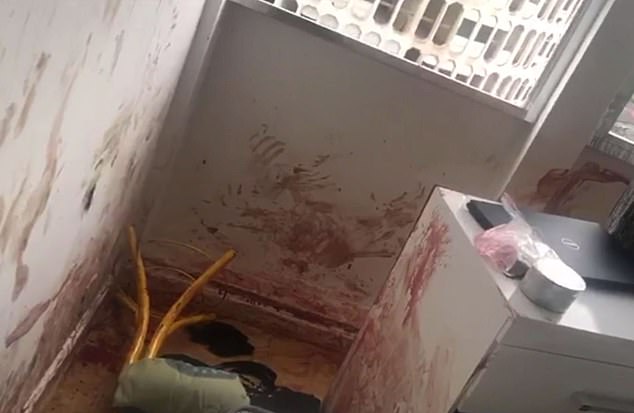 The walls of Ms Caparroz’s Rio de Janeiro flat were left covered in blood and the furniture thrown about. It is believed the victim was dragged around the apartment during the assault

‘He just kept on screaming and swearing at me. He was beating me so much, so hard. The punches were so strong. I tried to defend myself but each punch he gave me I thought I was going to die.’

‘I begged him to stop but he wouldn’t so I started to scream “help me, help me” and I kept shouting out the number of my flat so my neighbours would know which one to come to.

‘Then I think I must have passed out because I don’t remember much else except vaguely hearing someone asking how I was doing.’

On Monday, a judge ruled the perpetrator should be detained behind bars pending investigations.

‘Releasing the suspect could generate more fear for the victim who is already shaken by such a serious crime being allegedly committed in her residence,’ the magistrate said.

The accused has also been ordered to undergo psychiatric medical examination to assess his state of mind. He faces up to 30 years in prison if found guilty of the crime.

A medical report released on Monday said the victim had been transferred from the intensive care unit in Casa de Portugal Hospital and was in a stable condition.

After a series of examinations and scans doctors said she is recovering well and will not need to undergo surgery.

The single mother of one told well wishers she is ‘making a recovery’.

‘I will be fine. I will soon be in good shape,’ she said. 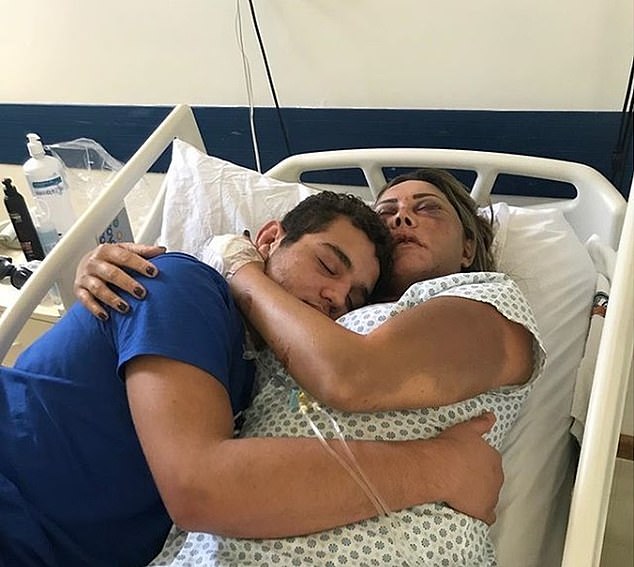 Rayron Gracie, Ms Caparroz’s son and Jiu-jitsu fighter, visited his mother in hospital after travelling from the United States where he lives and trains

However her brother Rogerio said: ‘Psychologically she is still disorientated and confused. We don’t know whether there will be long term consequences as doctors have not ruled out neurological damage.

‘Unfortunately, she has begun to blame herself and to wonder if it was her fault.’

Detective Juliana Emerick, director of the women’s police station in Rio told Brazilian media G1: ‘It is common among victims of aggression to believe they have done something wrong and we are working hard to encourage those suffering domestic violence to come forward.

‘We would also warn women that they should always take precautions when it comes to dating online. 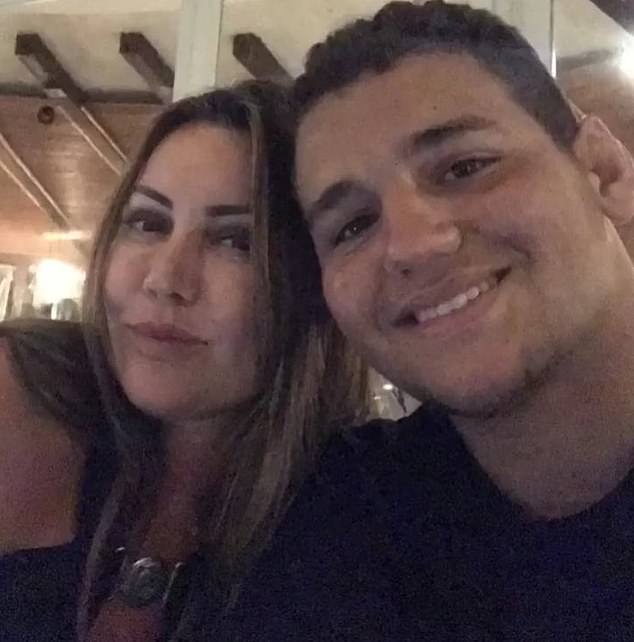 ‘The first meeting should always be in a public place, no matter how confident you feel, even though it may follow months of conversation in the virtual environment.’

She advised that a friend or relative should be told where and when the date is happening and that a contact number should be given to keep in touch.

The victim’s son, Rayron Gracie, a Jiu-jitsu fighter, who lives and trains in the United States, posted a message of love for his mother on Instagram and thanked everyone for their support and prayers following the violence.

On Tuesday, the young martial arts expert who is a member of the Gracie family, famous for being one of the forerunners of Brazilian Jiu-jitsu, arrived in Brazil and updated well-wishers with a picture of him lying on the hospital bed, hugging his mother.