Brazilian President Jair Bolsonaro said that the government lacks the resources to fight wildfires in the Amazon rainforest after satellite images showed a record number of burning spots this year.

In a speech broadcast live on Facebook on Thursday, the president said the government is investigating the fires, which are being considered the Amazon’s worst fires since records began.

The president also backtracked on previous claims that non-governmental organizations were starting fires in the forest, saying he was only talking of his suspicions.

His comments come as the fires were being blamed on farmers and loggers who felt emboldened by President Jair Bolsonaro’s pro-rancher policies.

In the last seven days more than 9,500 fires have ripped through Brazil’s dense rainforest and activists claim most of them will have been set by men working in the jungle, clearing land for cattle and logging.

Despite Bolsonaro’s claims that uncontrollable blazes are frequent during the ‘queimada’, the annual slash-and-burn, an 84% increase on last year cannot be attributed to the dry season alone.

‘It is very difficult to have natural fires in the Amazon; it happens but the majority come from the hand of humans,’ said Paulo Moutinho, co-founder of the Amazon Environmental Research Institute.

A tract of Amazon jungle burns as it is being cleared by loggers and farmers in Novo Airao, Amazonas state, Brazil on Wednesday 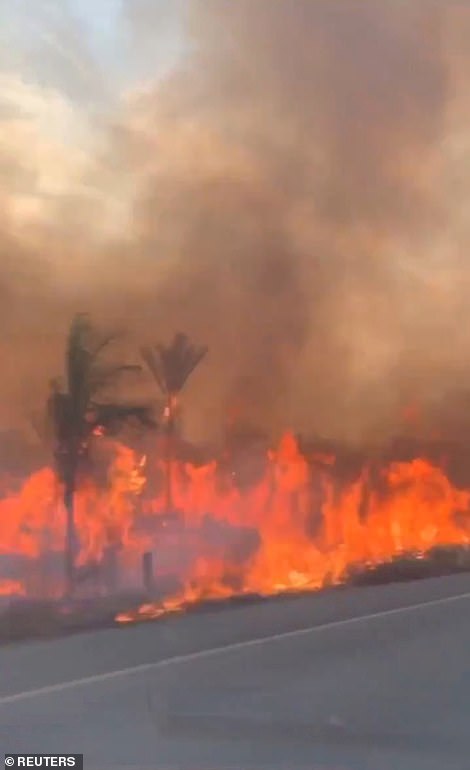 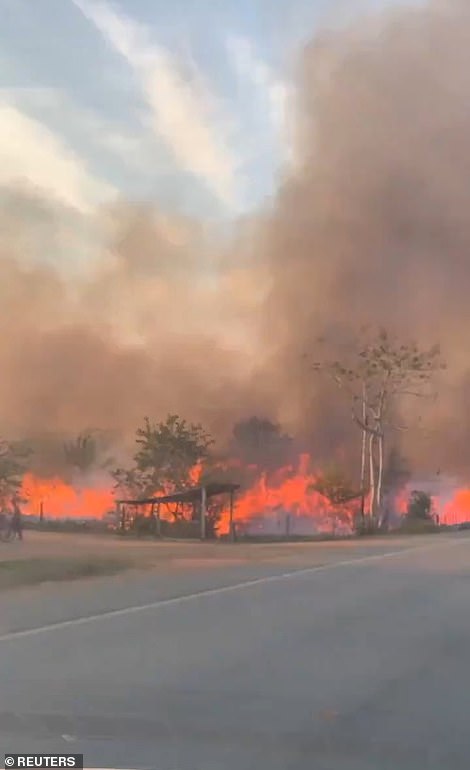 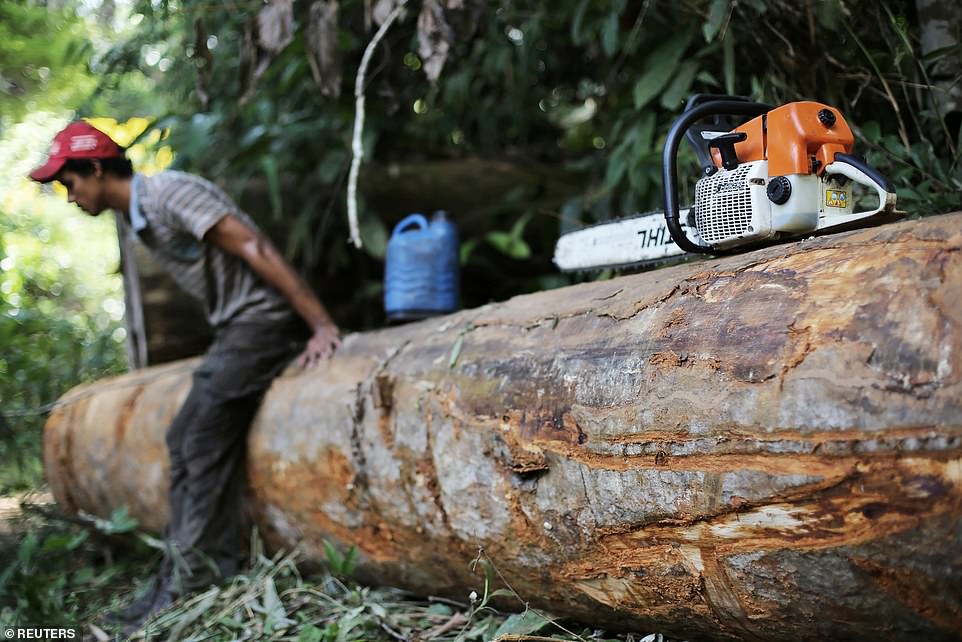 A logger working in the Amazon rainforest in Jamanxim National Park, near the city of Novo Progresso, Para (file photo) 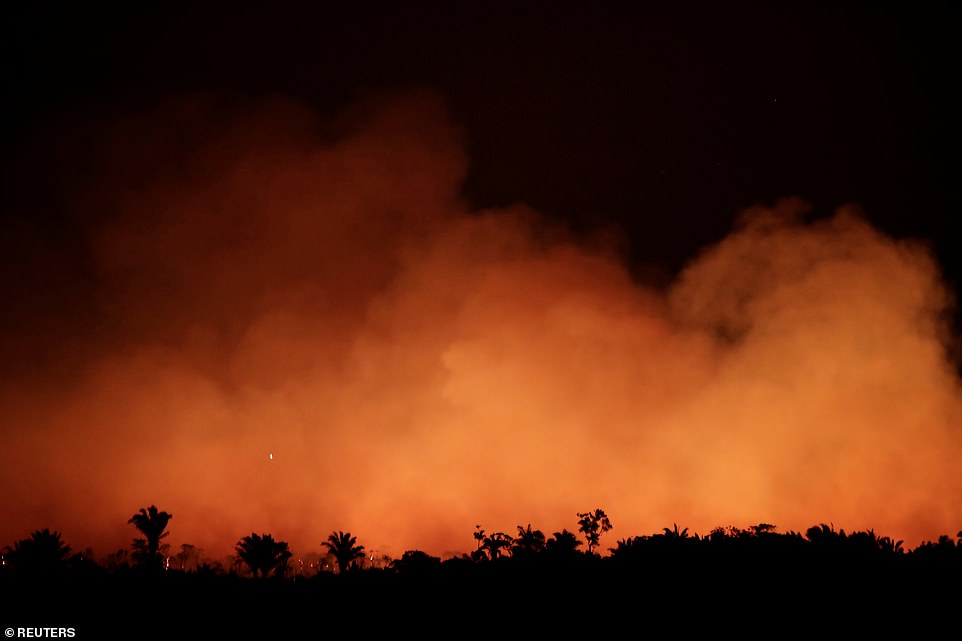 Smoke billows during a fire in an area of the Amazon rainforest near Humaita, Amazonas State on Saturday 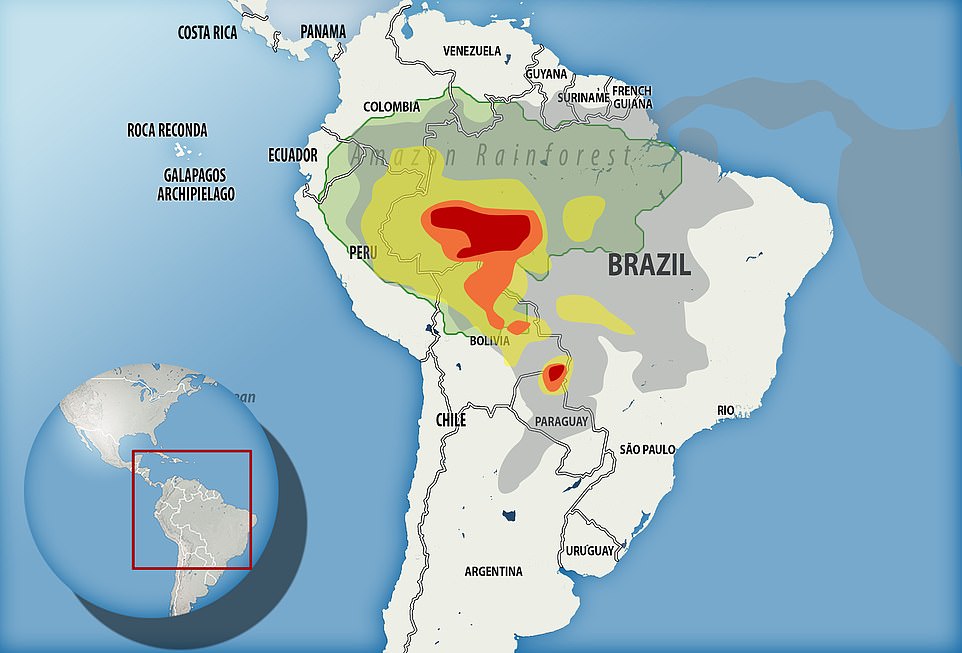 Moutinho, who has been working in the Amazon forests for nearly 30 years, said fires are mostly used to clean up vast areas of land for farming or logging.

The fires can easily get out of control, especially now during the Amazon’s dry season, and spread to densely forested protected areas.

This year, the Amazon has not suffered from serious dryness, Moutinho said. ‘We’re lucky. If we had had droughts like in the past four years, this would be even worse.’

Activists believe the farmers and loggers are burning unprecedented tracts of the jungle for their work and feel supported by Bolsonaro’s pro-agribusiness stance.

Bolsonaro and Environment Minister Ricardo Salles are both close to the powerful rural caucus in Congress and have been urging more development and economic opportunities in the Amazon, which they consider overly protected by current legislation.

Salles was booed today as he took the stage at a five-day UN workshop on climate change in the northern state of Bahia – an event he had tried to cancel earlier this year.

Some in the audience shouted while waving signs reading, ‘Stop Ecocide’ or ‘The Amazon is burning,’ as Salles made a brief speech. 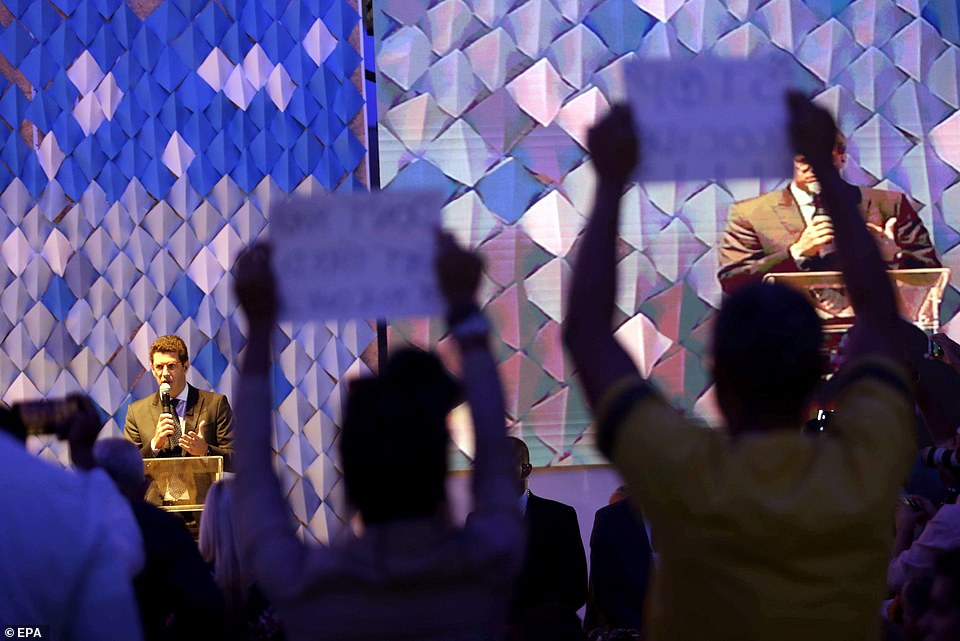 The Brazilian Environment Minister, Ricardo Salles, is received with booing and shouts of the ‘Amazon burns’ from activists during the opening plenary of the Latin American and Caribbean Climate Week held until this Friday 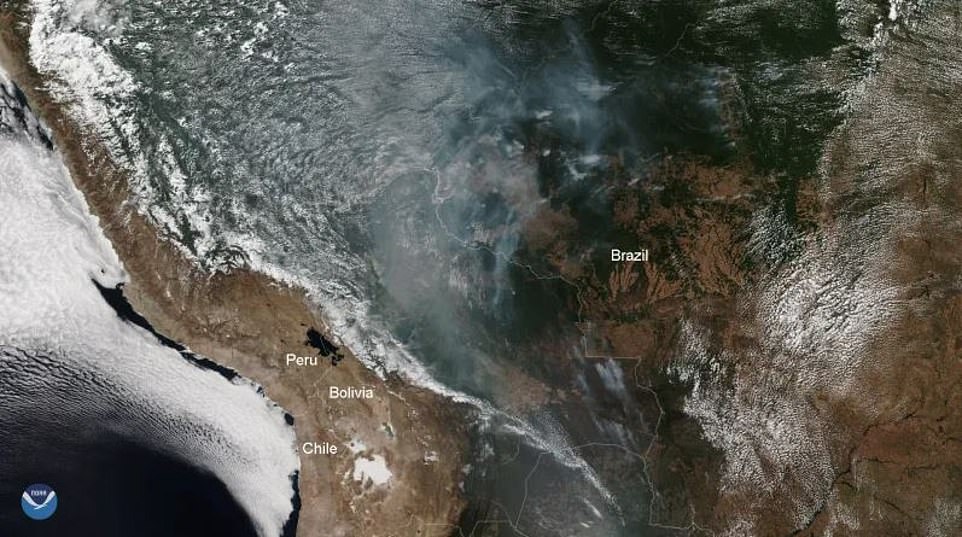 Huge clouds of smoke can be seen drifting from the northern Brazilian states of Amazonas, Para, Mato Grosso and Rondonia down through its borders with Bolivia, Chile and Peru as the fires which have raged since the beginning of the year continue 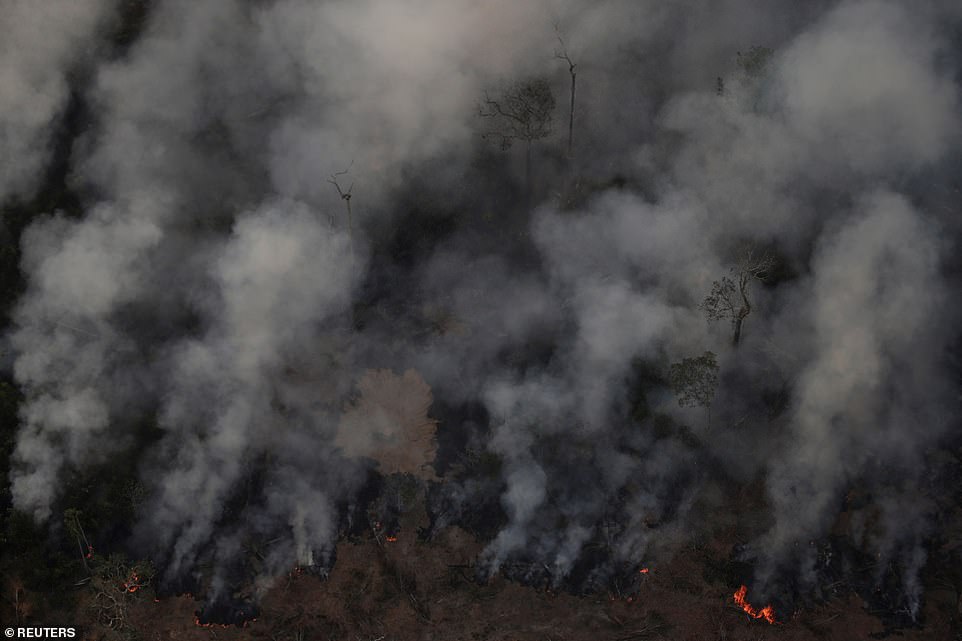 Smoke billows during a fire in an area of the Amazon rainforest near Porto Velho, Rondonia State on Wednesday 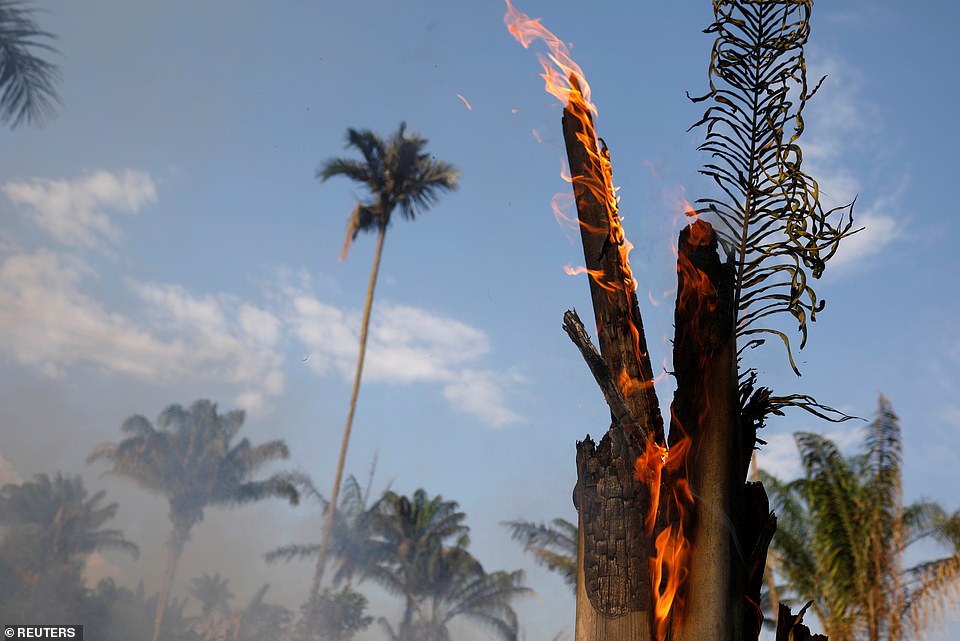 An tract of Amazon jungle burning as it is being cleared by loggers and farmers in Iranduba, Amazonas state on Tuesday

Last week local media reported that a ‘fire day’ had been declared by farmers in Para as a direct response to Bolsanaro.

Brasil de Fato reported the organiser said: ‘We need to show the president that we want to work and the only way is to knock it down. And to form and clear our pastures, it is with fire.’

Brazil’s National Institute for Space Research (INPE) said the country has seen a record number of wildfires this year, counting 74,155 as of Tuesday, an 84 percent increase compared to the same period last year. Bolsonaro took office on Jan. 1.

The states that have been most affected by blazes are Mato Grosso, Para and Amazonas – all in the Amazon region – accounting for 41.7 percent of all fires.

Bolsonaro sacked the head of the INPE earlier this month for ‘lying’ about deforestation levels being 88% higher this year than in 2018.

And he has remained combative, yesterday claiming NGOs had started the recent fires in retaliation for his environmental policy.

His administration is also forging ahead with plans for two new hydroelectric dams which will cause flooding across vast swathes of the rainforest. 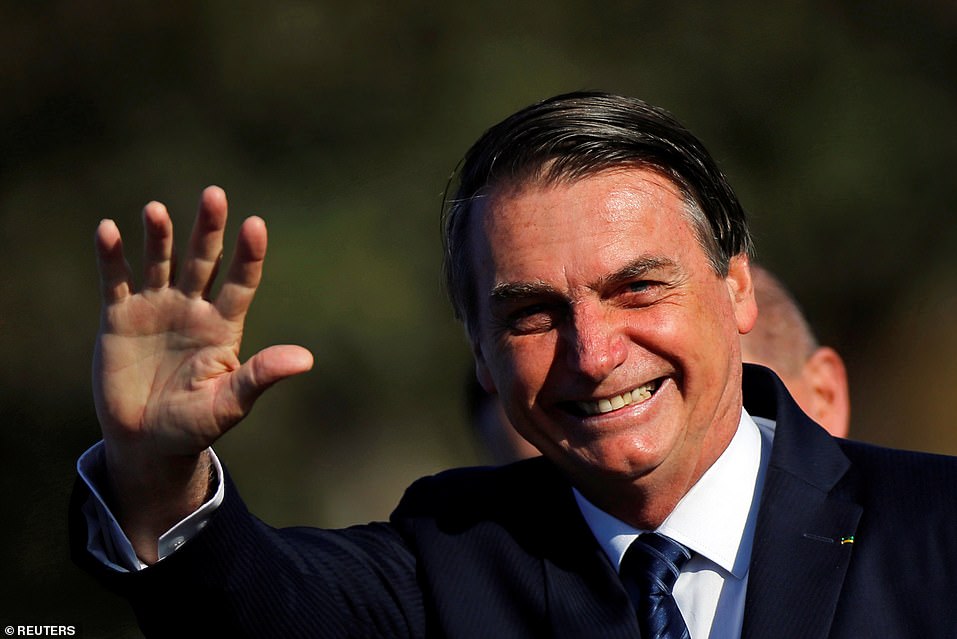 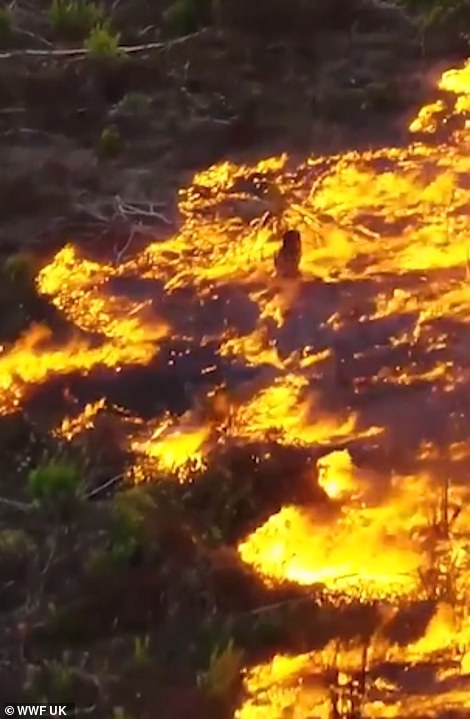 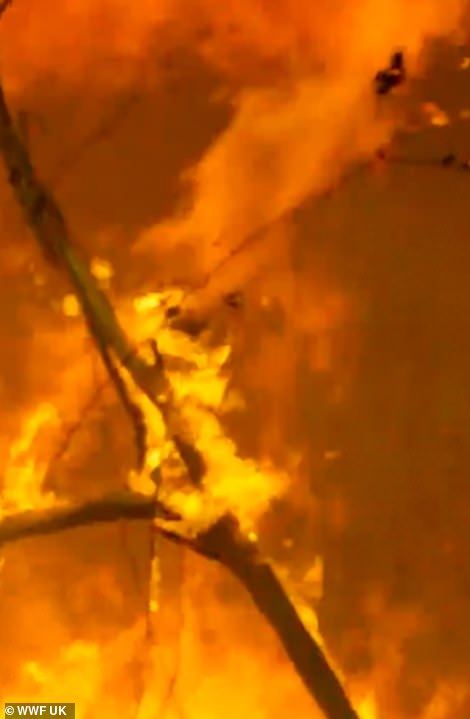 Jair Bolsonaro, a longtime sceptic of environmental concerns, wants to develop the Amazon, and has told other countries worried about rising deforestation since he took office to mind their own business (pictured: The Amazon fire)

In a list of new projects announced on Wednesday, was the Bem Querer plant in Roraima and the Tabajara plant in Rondonia.

They would cause the destruction and flooding of 152,711 acres of rainforest, according to Estadao, around the same size as Greater Manchester.

Neither of the projects has environmental licensing, and the Bem Querer proposal also poses risks to indigenous lands.

Bolsonaro, who once threatened to leave the Paris climate accord, has repeatedly attacked environmental nonprofits, seen as obstacles in his quest to develop the country’s full economic potential, including in protected areas.

The government is also facing international pressure to protect the vast rainforest from illegal logging or mining activities.

The Amazon is often referred to as the lungs of our planet because it is a major absorber of carbon dioxide from the atmosphere. 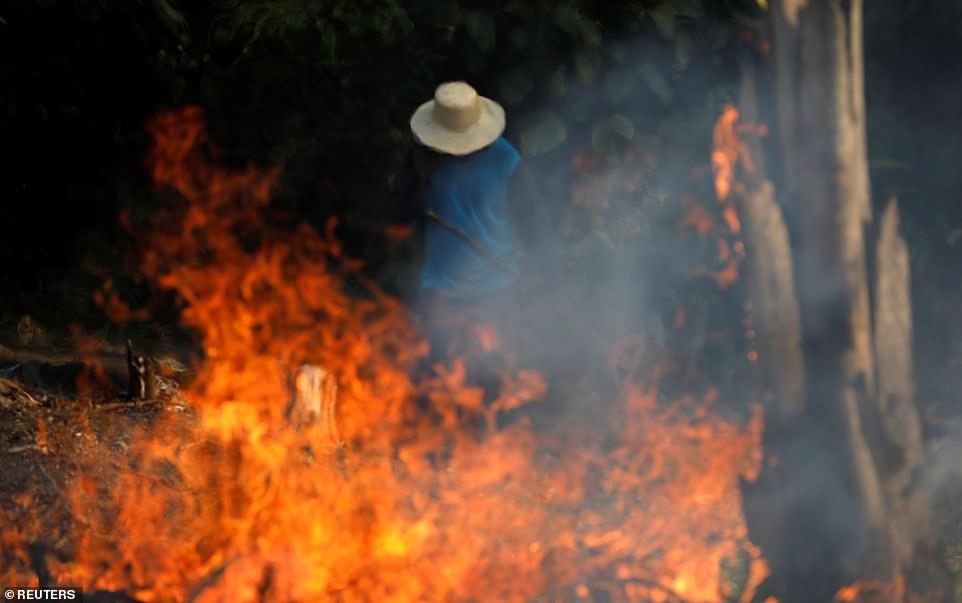 A man works in a burning tract of Amazon jungle as it is being cleared by loggers and farmers in Iranduba, Amazonas state, Brazil on Tuesday. Wildfires are common in the dry season, but are also deliberately set by farmers illegally deforesting land for cattle ranching. 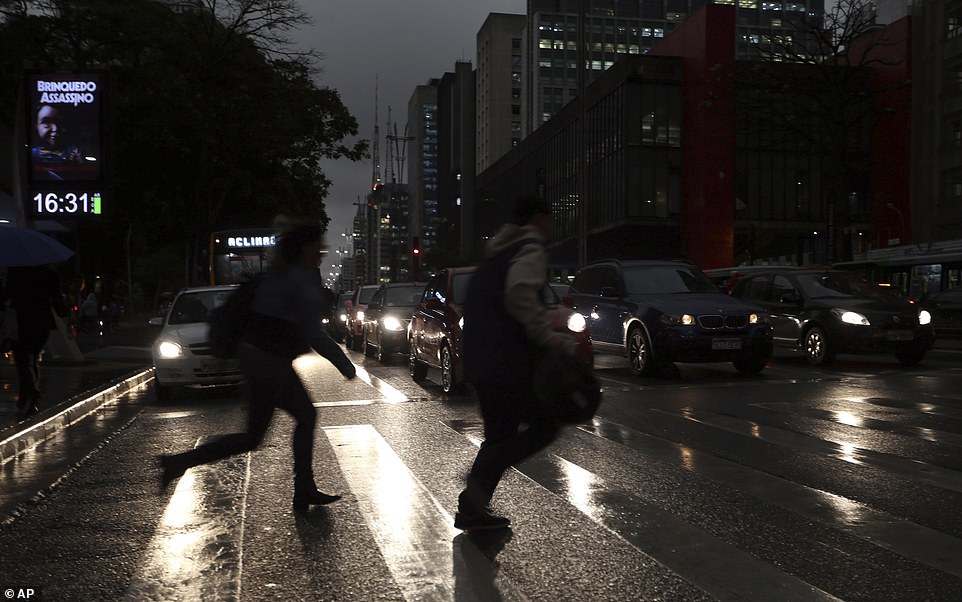 Overcast and dark sky at Paulista Avenue, in Sao Paulo, Brazil, on Monday afternoon. Cars were forced to turn their headlights on during the start of the evening rush hour at around 4.30pm, when it would usually be daylight 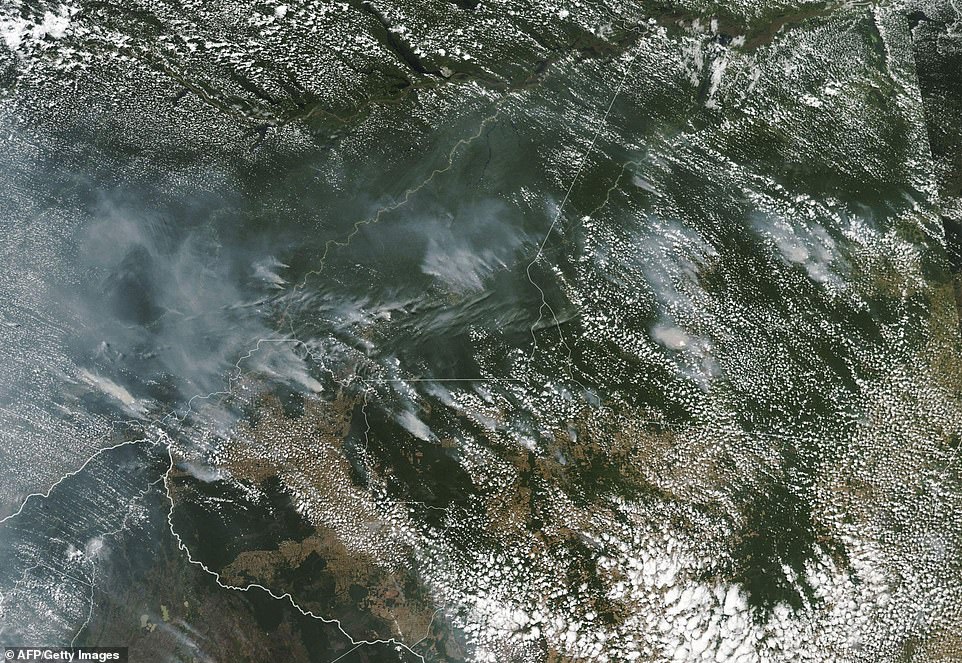 Citing Brazil’s apparent lack of commitment to fighting deforestation, Germany and Norway have decided to withhold more than £50million in funds earmarked for sustainability projects in Brazil’s forests.

French and German leaders have also threatened not to ratify a trade deal between the European Union and Mercosur countries to pressure Brazil into complying with its environmental pledges within the Paris Climate Agreement.

But experts say Brazilians and particularly farmers could be the first victims of excessive deforestation, as it could affect the regional climate, bringing higher temperatures and less rain.