Brazil’s far-right President-elect says that on taking office he will allow citizens without a criminal record to own guns.

Jair Bolsonaro, who takes office in January, made the statement on Twitter as part of his election campaign to loosen gun laws.

The ex-army captain’s message appealed to many Brazilians who want to use guns for self-defense amid sky-high levels of violent crime.

Currently possession of firearms is tightly restricted in Brazil. Civilians must pass through a long process, and the sale of weapons is limited to small calibers.

However gun violence is a problem in Brazil and in 2017, the country set a record for murders with more than 63,000 people killed.

A 2005 referendum asked Brazilians if the sale of firearms should be banned and almost 64 percent of the population voted against the measure.

Bolsonaro wrote on Twitter on Saturday: ‘By decree, we plan to guarantee the ownership of firearms by citizens without criminal records’.

The far-right President-elect did not provide additional details and it was not immediately clear what mechanisms he would have at his disposal to carry out such a decree, or what specific measures the decree would contain. 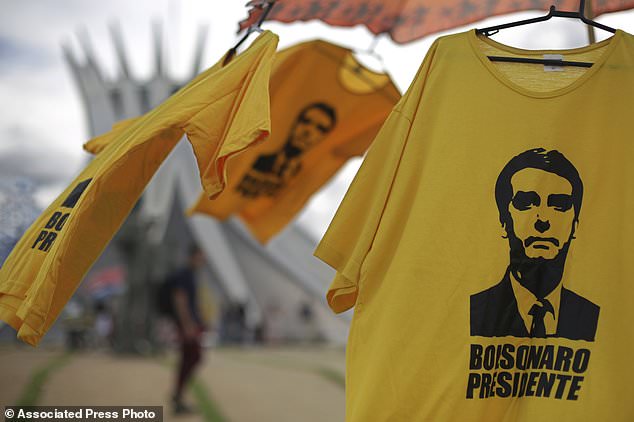 Bolsonaro wrote on Twitter on Saturday: ‘By decree, we plan to guarantee the ownership of firearms by citizens without criminal records’

Gun manufacturers are among those that are set to benefit. Shares in Brazilian gun maker Taurus Armas SA have climbed some 88 per cent amid expectations that Bolsonaro would win the election.

Bolsonaro won the election crusading against corruption and crime. But the incoming president also faced scrutiny for his comments about women, homosexuals, and minorities, as well as statements praising the former Brazilian dictatorship.

Among Bolsinaro’s controversial comments that grew scrutiny during the campaign are times he said he would prefer a dead son to a homosexual one.

Of torture, he said: ‘I am in favor of torture — you know that. And the people are in favor of it, too.’

At a rally in October he threatened to jail political opponents. ‘This time, the cleanup will be even greater. This group, if they want to stay, they will have to abide by our laws. Either they stay out or they will go to jail,’ he said, The New York Times reported in a catalogue of his controversial comments.