The yellow fever death toll in Brazil has tripled just weeks before thousands of Americans head to country for Carnival.

The World Health Organization (WHO) said on Monday there are 35 confirmed cases of the disease, including a case of the disease confirmed in the Netherlands for a traveler who had recently visited Sao Paulo state.

This comes a week after the agency recommended that foreign travelers get the yellow fever shot before attending Carnival, an annual event in which tens of thousands of tourists descend on Sao Paulo, Brazil’s largest city, for the festivities.

Health officials have said the disease could become an epidemic in crowded areas, but immunologist Dr Anthony Fauci told Daily Mail Online that getting the yellow fever shot is the best way to prevent travel-related cases of yellow fever. 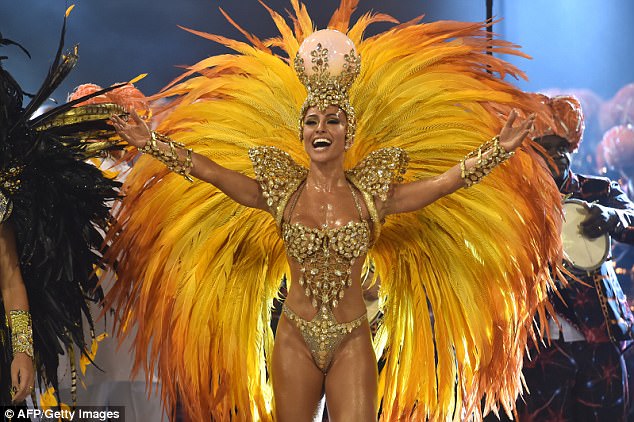 Carnival of Brazil is an annual week-long celebration that marks the beginning of Lent, the 40-day period before Easter

Yellow fever is a potentially life-threatening viral disease that’s transmitted by mosquitoes and is commonly found in tropical and subtropical areas.

Carnival of Brazil, which takes place February 9 through February 14, is an annual week-long celebration that marks the beginning of Lent, the 40-day period before Easter.

Last year, Dr Fauci wrote in the New England Journal of Medicine that experts are concerned about the high number of yellow fever cases in Brazil given the frequency of international travel.

‘As we have seen with dengue, chikungunya, and Zika, [mosquito]– mediated epidemics can move rapidly through populations with little preexisting immunity and spread more broadly owing to human travel,’ Dr Fauci, director of the National Institute of Allergy and Infectious Diseases, wrote.

Dr Fauci added that if there are outbreaks in highly populated areas of Brazil, there could be a lot of travel-related cases in the US.

He told Daily Mail Online that travelers should adhere to WHO’s recommendation to get the yellow fever vaccination since it’s believed to be 98 to 99 percent effective.

However, Brazil’s Health Ministry said despite WHO’s recommendation, they will not change its advisory that only requires travelers going to rural areas to be vaccinated.

Deputy Health Minister Antonio Carlos Nardi said Carnival celebrations in February were in urban areas and that visitors would not be at risk if they stayed in cities.

Still, Brazilians lined up for hours to get yellow fever vaccinations in the country’s largest states, including Sao Paulo, last week.

The WHO said 777 human cases of yellow fever had been reported in eight Brazilian states since December 2016 and that 261 people had died from the virus.

WHO officials said the confirmed cases of yellow fever are likely to have been contracted in areas where there have been yellow fever outbreaks among primates.

‘There is an ongoing threat of an outbreak related to the fact in non-human primates,’ Dr Fauci explained. ‘There is a ongoing reservoir of yellow fever.’

Nearly 200,000 cases of yellow fever are reported worldwide each year, including 30,000 deaths.

Symptoms of the viral infection include fever, severe headache, muscle pain, nausea and vomiting, and fatigue.

The disease can be combated with the yellow fever vaccines, a live-virus shot recommended for people 9 months through 59 years old who are traveling to or living in areas at risk for yellow fever virus transmission.