BREAKING: ‘Several’ people dead after a tornado levels a hotel in Oklahoma

At least two people have died after a tornado ripped through a hotel in Oklahoma, according to officials.

The American Budget Value Inn in El Reno was torn apart last night, with witnesses saying people are being pulled from the rubble.

More than 30 people are believed to have been inside the hotel when the tornado struck.

A nearby mobile home park in the path of the tornado was also destroyed.

The American Budget Value Inn in El Reno, just west of Oklahoma City lies in ruins after a tornado tore through the building on Saturday night. Two people have been confirmed dead with unconfirmed reports of a further 17 people missing

The total death toll is not yet clear, but El Reno Mayor Matt White did confirm the two deaths at the hotel.

‘We had an incident where a tornado hit a mobile home park, a hotel and several business(es). It’s been a serious, serious event here. We have all hands on deck.’

Onlookers have been asked to stay away from the area while rescue teams search through the debris of the hotel and trailer park.

There are unconfirmed reports that suggest a further 17 people are missing from the second floor.

The tornado is believed to have touched down near the junction of Highway 81 and Interstate 40 to the south of the city. 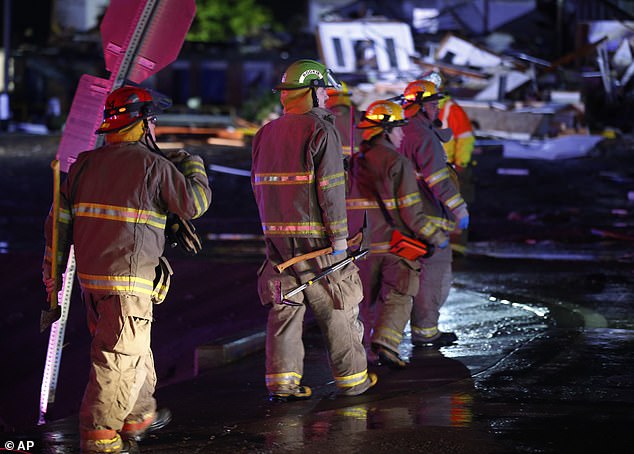 Firefighters arrive at the scene, one armed with an axe and another carrying a blow-over stop sign, as the search through the rubble of the building and the trailer park begins 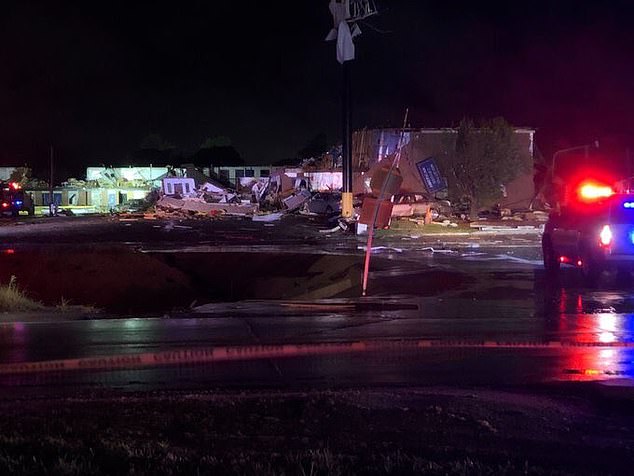 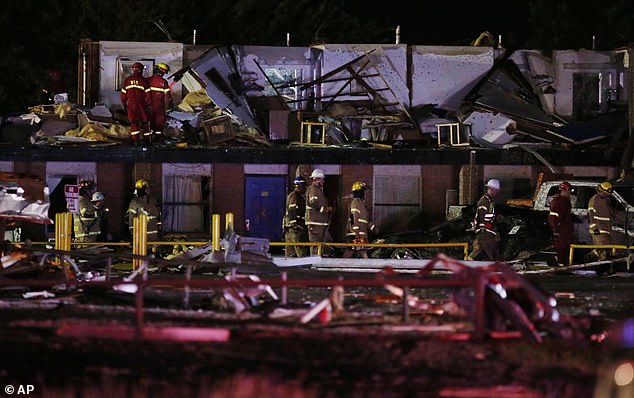 Video at the scene showed emergency crews sifting through the rubble after part of the motel’s second story collapsed.

A tornado warning was issued for El Reno at 10.26pm on Saturday. The National Weather Service located a tornado over the city mere minutes later at 10.31pm.

‘This is an unfortunate example of just how quickly these types of storms can develop,’  Union City Police Department Chief Richard Stephens wrote on Facebook.

‘Please remain weather aware and be prepared,’ he added.

The tornado struck El Reno nearly six years to the day the city was hit by the widest tornado on record.

Storms have ravaged central US states over the last week, and are continuing to threaten major flooding into the holiday weekend.

Smith says crews will assess the damage on Sunday to determine the severity.

A tornado warning was issued for downtown Oklahoma City as the same thunderstorm that struck El Reno blasted into the area. A possible tornado caused damage at the Oklahoma State Fairgrounds, according to Accuweather.

A tornado was also spotted near Oktaha, Oklahoma on Sunday morning and tornado warnings were issued for Broken Arrow and Tulsa.

The bodies of a man and a woman were discovered Friday in a submerged vehicle near the Mississippi River in Missouri,

John Reinhardt, 20, and Caitlin Frangel, 19, both of Hazelwood, were reported missing May 15.

Their bodies were found around 4am on a flooded rural road that runs along the river at Portage Des Sioux, about 40 miles north of St Louis.

‘We believe they went into it in the dark, not knowing the roadway was flooded, and they were unable to get out,’ Thompson said.

Meteorologist Jean Suriel posted a terrifying video of the tornado that destroyed more than a dozen homes in Oklahoma on Tuesday.

Suriel revealed that at least 24 tornadoes were recorded in less than 24 hours in the US, and 52 tornadoes had formed in even states in the span of three days last week.

Flooding along the Arkansas River will threaten communities from Tulsa into western Arkansas through at least the holiday weekend, officials said Friday, as water released from an Oklahoma dam combines with additional rain in the forecast.

To control flooding in Tulsa, the US Army Corps of Engineers on Friday began increasing the amount of water being released into the river from the Keystone Dam northwest of the city of about 400,000 people.