Two people have been killed and three injured following a gas pipe explosion in Texas.

Contractors from Atmos Energy were working on a section of the pipeline near Farmersville, in Collin County – about 40 miles north east of downtown Dallas.

It was unclear what caused the explosion, which was reported at 4pm on Monday.

Local media showed footage from the scene, with no visible flames or sign of disturbances.

Police and firefighters are seen by the pipeline on Monday, after an explosion was reported. Two people were killed and three injured in the accident, which happened as Atmos Energy contractors worked on the site 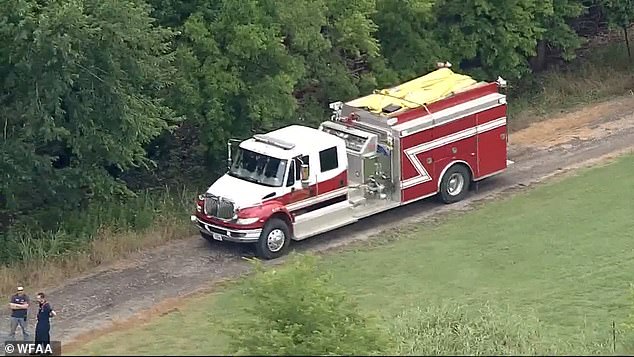 Fire trucks are seen arriving at the scene near Farmersville, on the outskirts of Dallas

Farmersville police chief told WFAA that the contractors were repairing the line at the time of the explosion.

Police and firefighters from Farmersville and neighboring Princeton were on the scene.

‘The scene is safe, but we ask that you try to avoid this area, if possible,’ the Collin County Sheriff’s Office said.