Aldesleukin is currently used to treat people with kidney or skin cancer, but researchers think it could be ‘revolutionise heart attack treatment’, as it increases levels of a rare white blood cell that protects the organ

A cancer drug could help speed up recovery in heart attack patients and cut the risk of a second attack, experts say.

An injection of aldesleukin increases levels of a rare white blood cell that protects the heart, researchers at Cambridge University have found.

Experts are now trialling the drug – normally used to treat skin and kidney cancer – on 60 heart attack patients in England after it showed promising results in small studies.

If the ongoing trials are as successful, the researchers said the treatment could ‘revolutionise heart attack treatment’.

Around one in five people go on to have a second heart attack. 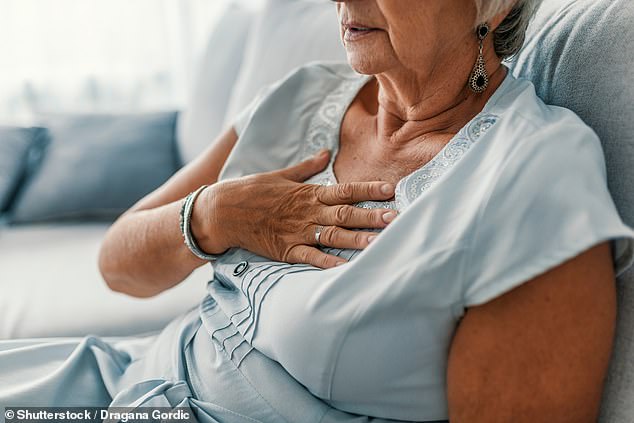 Heart attack survivors often get a concoction of blood thinning drugs, such as Aspirin, and ACE inhibitors, which widen the blood vessels to increase the amount of blood that the heart can pump around the body.

They may also receive beta blockers, which slow down the heart to protect against a second heart attack, and cholesterol-lowering statins.

But about one in five people who have had a heart attack will be readmitted to the hospital for a second one within five years.

Figures suggest there are 100,000 hospital visits because of heart attacks in the UK each year, while there are around 800,000 annually in the US.

Aldesleukin is currently used to treat people with kidney or skin cancer.

It works by increasing the number and activity of white blood cells, which can help the immune system kill cancer cells.

The Cambridge scientists first tested the drug on mice, before launching a clinical trial of 12 heart attack patients in their 60s, while an additional four patients received a placebo injection.

The researchers found both the mice and human trials of aldesleukin increased levels of immune cells that protect the heart, which are called innate type 2 lymphocyte (ILC2).

Dr Tian Zhao, a British Heart Foundation clinical lecturer in cardiovascular medicine at the University of Cambridge, said: ‘Right now, there is no way to stop the immune system, which gets activated after a heart attack, from mistakenly damaging the heart.

‘If our clinical trial shows that aldesleukin works the same way in people as it does in mice, by harnessing the ‘good cops’ of our immune system, we may have found a way to help the heart heal after a heart attack.’

The researchers studied mice that were unable to produce ILC2 and found that their hearts did not recover as well after a heart attack.

But mice that could produce ILC2 had reduced heart scarring and better heart function after a heart attack.

And a low dose of aldesleukin given to patients led to higher levels of ILC2.

The ILC2 cells have previously been found to reduce the inflammation in arteries.

By targeting the inflammation caused by the body’s immune response to a heart attack, the experts hope the drug will also reduce a person’s risk of having a second heart attack.

Researchers are not yet sure how much the treatment will cost, as the currently licensed dosage is 12 times higher than the one given in the trials.

Professor Metin Avkiran, associate medical director at the British Heart Foundation, said: ‘Every five minutes someone is admitted to a UK hospital due to a heart attack.

‘Thanks to research, heart attacks are now treatable, and seven out of ten people will survive. However, many heart attack survivors will still be left with damaged hearts.

‘This research reveals a new approach that has the potential to both help heal hearts damaged by a heart attack and reduce the risk of a further heart attack.