Breakthrough pill that expands in patients’ stomach DOUBLES the chance of losing weight if taken 20 minutes before a meal, researchers find

A breakthrough slimming pill that expands in the stomach could double people’s chances of losing weight.

The capsule is taken 20 minutes before meals and enlarges to make the dieter feel too full to eat any more.

It fills up a quarter of the stomach by absorbing water and could be available over the counter in chemists by next year.

Scientists asked 223 people to take three of the pills before lunch and dinner, while on a moderate diet – eating 300 fewer calories a day. Compared to more than 200 people taking useless sugar pills, those on the slimming pills were twice as likely to lose 5 per cent or more of their body weight.

The capsule worked for 59 per cent of people, who lost 22lbs of weight and dropped two dress sizes on average from their waist circumference.

The slimming pill, made of plant materials works similarly to a gastric balloon, which is used to help morbidly obese people lose weight by filling up their stomach.

But it is effective in people who are simply overweight or on the lower scale of obesity.

The study, presented at the European Congress on Obesity in Glasgow, found few side effects from the slimming pills beyond mild gastrointestinal problems like bloating and abdominal pain.

Jason Halford, of the University of Liverpool, who was not involved in the study, said: ‘This is a breakthrough for people who eat too much at a meal or find themselves going back for seconds. This capsule will make them feel full more quickly, so that they eat less. We didn’t previously have a study showing that this could work, although it won’t be effective in stopping people snacking between meals.’

The slimming pill, made by Gelesis, is made from cellulose and citric acid. It works similarly to foods like porridge and vegetables which also absorb water to help people feel fuller for longer. 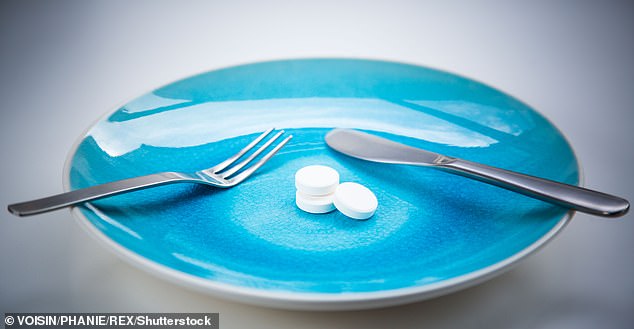 The study, presented at the European Congress on Obesity in Glasgow, found few side effects from the slimming pills beyond mild gastrointestinal problems like bloating and abdominal pain (file image)

Researchers led by Charles University in Prague asked people who ranged from overweight to severely obese to take the capsule before lunch and dinner, then drink almost half a litre of water every day for 24 weeks.

The results show people who took the pill lost 6.4 per cent of their body weight on average, compared to 4.4 per cent of weight lost in people taking sugar pills. Among the three in five people for whom the pill worked, the group lost an average of 22 pounds or 3.5 inches from their waist. That is the equivalent of two dress sizes for women.

Dr Nathalie Farpour-Lambert, of the European Association for the Study of Obesity, said: ‘This could be a huge help to millions of people. It is well tolerated, and increases satiety so that people eat less. You don’t need a surgeon to do it, you just buy it in a box and swallow a pill.’

Gelesis said the slimming pills, called Plenity, are already available on prescription in the US. Dr Harry Leider, of Gelesis, said: ‘There really is an unmet need for new treatments that are effective for the majority and are really well tolerated. We are really optimistic that millions of people will benefit from Plenity.’