Breakthrough weight-loss drug ‘reduces the risk of diabetes by 19%’

A breakthrough twice-a-day weight-loss drug slashes the risk of developing type 2  diabetes by nearly a fifth, a landmark trial has found.

The appetite suppressant prevented their glucose levels from becoming too high and lowered the risk of complications, such as kidney damage, blindness and amputations, the research found.

It has been available on prescription as a weight-loss drug in the US since 2012 but is not in most European countries.

‘Lorcaserin is effective for weight loss, and in contrast to many other obesity medications to date, has proven safety for major adverse cardiovascular events,’ the scientists, from the Brigham and Women’s Hospital, wrote.

‘Now, we report that when added to lifestyle interventions, lorcaserin significantly reduced the incidence of diabetes’.

The appetite-suppressant lorcaserin, which is prescribed under the brand name Belviq in the US, decreases the risk of diabetes by 19 per cent in at-risk people with high blood sugar

‘We recently presented findings showing that [the] use of lorcaserin resulted in modest, but sustained, weight loss among obese and overweight patients without increasing [the] risk of heart attack and stroke,’ study author Dr Erin Bohula.

‘Now we report that, when added to lifestyle interventions, lorcaserin significantly reduced incidence of diabetes, increased rates of diabetes remission and reduced the risk of diabetic microvascular complications.’

Lorcaserin, prescribed under the brand name Belviq, works on the chemical messenger serotonin, which is associated with wellbeing and happiness.

Serotonin is also involved in curbing a person’s appetite and cravings.

‘It provides another tool, beyond diet and exercise, for patients hoping to achieve and maintain weight loss.

‘And, happily, as we saw, even relatively modest weight loss can improve the diabetes control in those with diabetes and reduce the development of diabetes in those at risk.’ 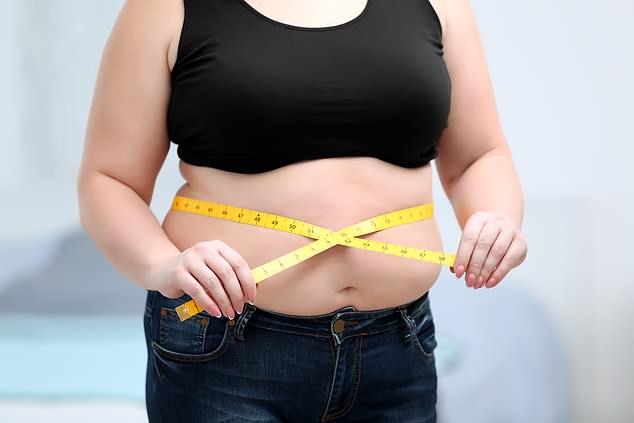 Prediabetes occurs when a person’s blood sugar level is higher than normal. If this continues to rise, they may develop diabetes (stock)

The researchers analysed the effects of lorcaserin on 12,000 overweight or obese patients, aged 50s or older, who were also undergoing lifestyle changes to become healthier.

Some 57 per cent of the patients had diabetes, while 33 per cent were suffering from prediabetes.

Prediabetes occurs when a person’s blood sugar level is higher than normal. If this continues to rise, they may develop diabetes.

The remaining 10 per cent of the participants had normal blood sugar levels.

From February 2014 to November 2015, half of the participants took 10mg of lorcaserin twice-a-day, while the remainder received a placebo.

They were then followed for around 3.3 years.

Results showed that among the patients with prediabetes, lorcaserin reduced the risk of diabetes by 19 per cent compared to the placebo.

Lorcaserin also resulted in 7.1 per cent of the diabetics coming out of a state known as hyperglycemia – 21 per cent more than those taking the placebo.

This occurs when an excessive amount of glucose circulates in the blood.

The condition costs the NHS around £6.1 billion, out of its approximate £124.7 billion budget, every year.

Lorcaserin also reduced the risk of diabetic complications by 21 per cent in patients with diabetes.

These complications included persistent microalbuminuria, which occurs when there is a higher-than-normal level of the protein albumin in the urine due to it leaking from the kidneys.

This can be a sign of early kidney damage.

Diabetic retinopathy – the most common cause of vision loss in diabetics – and diabetic neuropathy – nerve damage that can lead to amputations – were also reduced.

When taken alongside lifestyle changes, lorcaserin also helped diabetics lose on average 9.3lbs (0.6st) after one year compared to 3lbs (0.2st) among those taking the placebo.

Fifteen percent even lost at least 10 per cent of their body weight versus five percent of those taking the placebo.

The findings were presented at the annual European Association for the Study of Diabetes (EASD) conference in Berlin and published in The Lancet.

‘Given the global prevalence of obesity and its association with type 2 diabetes and complications that can cause death or greatly diminish quality of life, we need therapeutic strategies that can be added to lifestyle modification to prevent and control diabetes,’ Professor Scirica said.

‘This rigorous and large-scale randomised study demonstrates the potential for improving glycemic control when adding a weight loss agent to a treatment plan.’

Although the results were largely positive, severe hypoglycemia with serious complications was more common, but rare, with lorcaserin.

Hypoglycemia occurs when a person’s blood sugar drops to abnormally low levels, which can cause loss of consciousness, seizures and even death.

Around 23.1 million people in the US and four million in the UK are diagnosed with diabetes, of which approximately 90 percent have type 2.

Type 2 diabetes occur when a person does not produce enough insulin or doesn’t respond to the hormone that is made. It is associated with obesity.

Lorcaserin has previously been described as the ‘holy grail’ of weight management due to it being three times more effective than dieting alone.

British experts said the pill – which costs about £220 for a month’s supply – would fill a huge gap in the battle against the UK’s obesity problem.

Currently, doctors can only advise people to diet and exercise or refer them for bariatric surgery.

Professor Jason Halford, an obesity expert at the University of Liverpool, said: ‘We have a massive gap between lifestyle modification and surgery.

‘There is nothing in between. So this could be widely prescribed if it is approved in the UK.’

Lorcarserin’s manufacturer Eisai said it was ‘evaluating its options’ on a new application to the European Medicines Agency last August.