The husband of a young mum given months to live after doctors found 30 tumours in her bones has sold almost everything they own to keep her alive.

David Gorrick works up to 60 hours a week managing a construction site and is preparing to sell his car to pay for natural therapies that could extend the life of his beloved wife Emma, 35, who has been told her cancer is resistant to chemotherapy.

The mum-of-two, from Cromer on Sydney’s northern beaches, beat breast cancer for the first time after she was diagnosed in 2011 at the age of 25.

But a double mastectomy and two children later, she is fighting for her life once again after metastatic breast cancer formed in her liver and bones.

David, 39, is appealing to the community for help after the family spent $100,000 building a home treatment centre in their garage to give Emma a chance to watch their beloved children Mya, five, and Ryan, three, grow up. 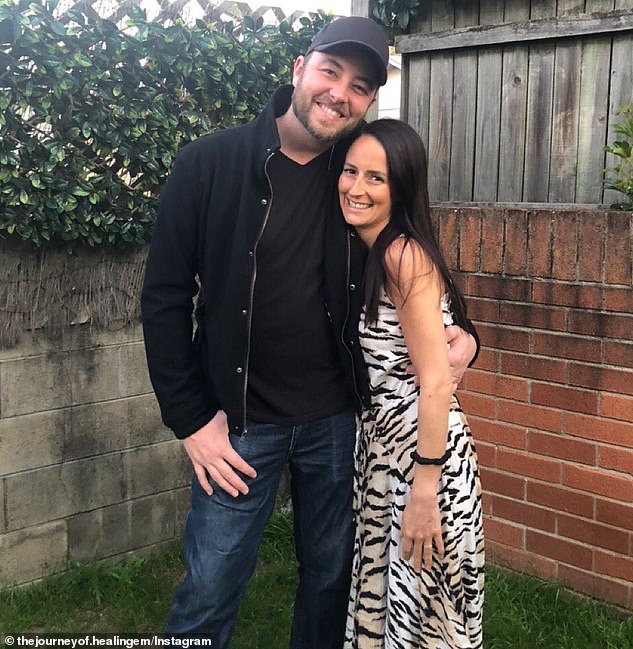 The cost of Emma’s alternative treatment which is not covered by Medicare is more than $1,500 a week.

‘A lot of people look at this sort of thing as very left field. We’re not against medication but this is the only thing that’s working for us,’ David said.

‘She’s very up and down. Her only wish is to be healthy.’ 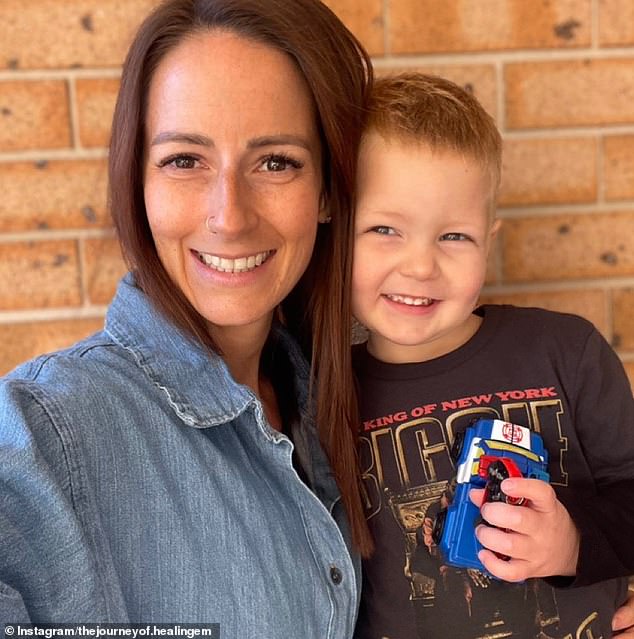 A double mastectomy and two children later, Emma (pictured with son Ryan) is fighting for her life once again after metastatic breast cancer formed in her liver and bones 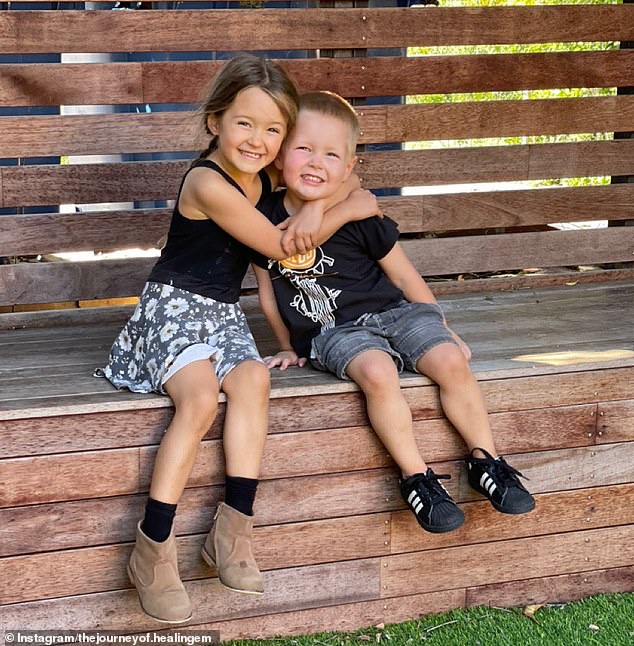 David, 39, is appealing to the community for help to give Emma a chance to watch their beloved children Mya, five, and Ryan, three, (pictured) grow up

The former hair salon owner was told in January 2020 that her cancer was incurable, 10 years after beating the disease through gruelling chemotherapy, radiation and surgery to remove both breasts.

This time, radiation has helped to shrink the ‘tennis ball-sized’ tumour in her liver, but the tumours in her bones remain.

After a course of oral chemotherapy, where it was found the new cancer was resistant to the drug and more tumours were growing in her bones, doctors gave her the devastating news that she had just months to live.

Their only suggestion was palliative care, but the alternative route Emma has pursued along with a strict vegan diet that led her to cut out sugar has seen the tumours in her bones vanish in the space of eight months.

– Constant back, bone or joint pain

– Difficulty with urinating (either incontinence or not being able to go); this can be a sign that nerves in your back are being pinched by a tumour

– Numbness or weakness anywhere in your body

– Loss of appetite or weight loss

While she still has five tumours growing in her liver and has ‘good days and bad days’, David says she feels generally well.

‘It’s a rollercoaster of emotion and she’s very up and down, but she tries to keep a positive mindset,’ he added.

The couple say they would ‘love to see’ more natural therapies be considered for the Pharmaceutical Benefits Scheme (PBS), but in the meantime their only option is to campaign for donations through GoFundMe.

A fundraiser launched on November 9 had amassed $49,398 at the time of writing. 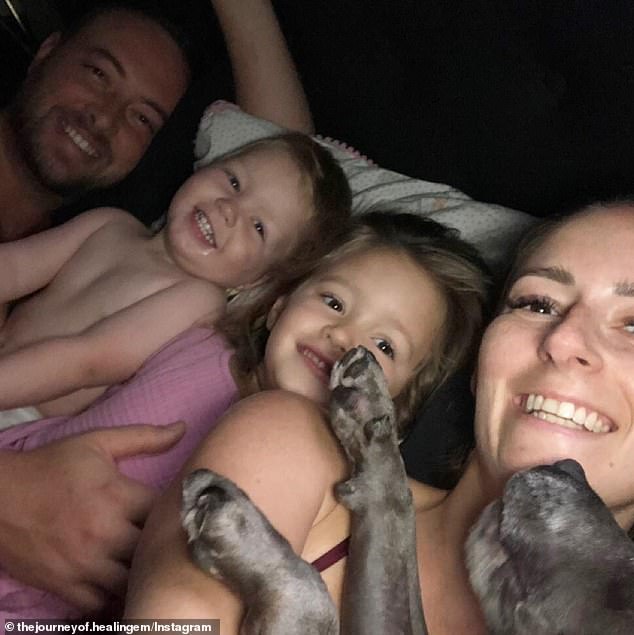 It’s been a difficult road for the family who last year were devastated when Australia’s international border closure prevented them from travelling overseas for experimental treatment.

While the four-year survival rate for Emma’ breast cancer sits at just 22 per cent worldwide, cutting-edge treatments are available in Japan, Germany and Mexico.

But due to pandemic border closures, she was cut off from potentially life-saving remedies only offered overseas.

David said if it wasn’t for the border closures, the family ‘definitely’ would have travelled for medical care. 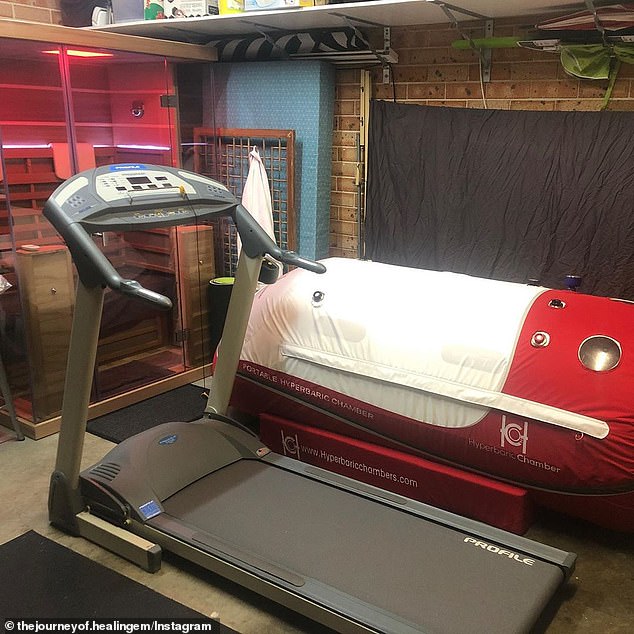 The family spent $100,000 on machines to treat Emma in their garage at home 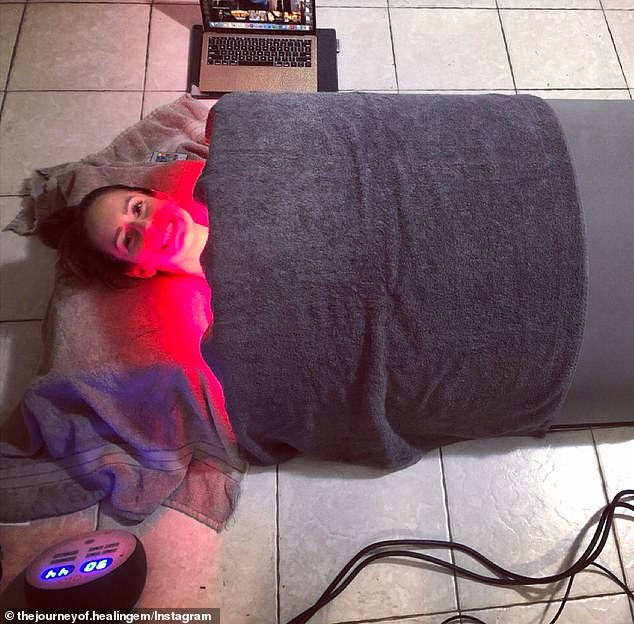 ‘The treatments available overseas are more advanced than us, but we haven’t been able to access those due to the pandemic,’ he said.

‘If it wasn’t for that, Em definitely would have gotten on a plane. There’s a lot of research to suggest the treatments would work.’

Determined to do everything in their power to lengthen her life, the couple saw no other option but to recreate the centre in their home when flights were grounded.

‘We’ve spent about $100,000 on equipment that is used at a cancer centre in Mexico and set it all up in our garage as a treatment hub,’ he said.

‘We’ve got two infrared saunas, hyperbaric chamber and a hypothermia chamber, and Em gets two Vitamin C infusions a week that cost about $370 each.’ 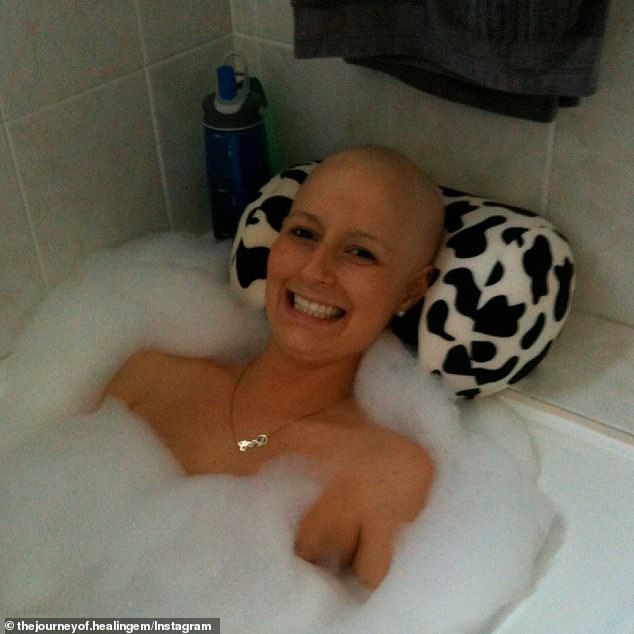 Emma is pictured in in 2011 while she battled breast cancer for the first time, at the age of 25

The family have since been forced to sell one of the saunas to pay for additional costs involved with Emma’s treatment.

The brave mum documents her gruelling experience on an Instagram page called The Journey of Healing Em.

In a post from August 2020, she wrote about an evening when she was in so much pain after a medical procedure that her then four-year-old daughter broke down.

‘Mya came home from kindy, saw me how I was not able to move and she was a mess crying all night asking to look after mamma,’ she wrote.

Despite the pain, Emma has remained positive and says she is ‘thankful of everything I’m learning along the way – there’s a silver lining to everything’.