A breast cancer survivor who had a double mastectomy followed by reconstruction has opened up about her decision to remove her implants after an excruciating battle with breast implant illness.

Rachel Garlinghouse, 40, from Missouri, has been candid about her experience on TikTok, where she shares topless videos of herself to raise awareness for breast cancer and breast implant illness (BII) — an unofficial term for the varying health issues that are believed to be caused by breast implants.

The author had been struggling with 29 different symptoms, ranging from depression to purple toes, when she had explant surgery to have her implants removed while fighting breast cancer for a second time.

‘One of the best days of my life was the day I had surgery to remove my breast implants,’ she wrote in an essay for Insider. ‘After three and a half years of scans, labs, and appointments, I was finally free of the silicone bags sewn into my chest that were making me sick.’

Breast cancer survivor Rachel Garlinghouse, 40, from Missouri, has opened up about her experience with breast implant illness (BII) after having her implants removed last year 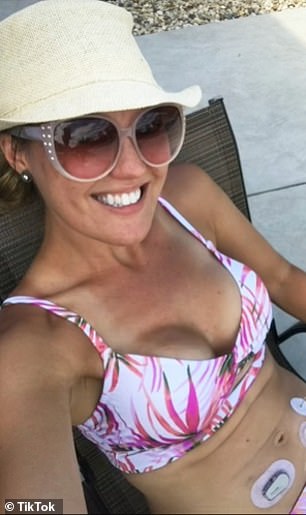 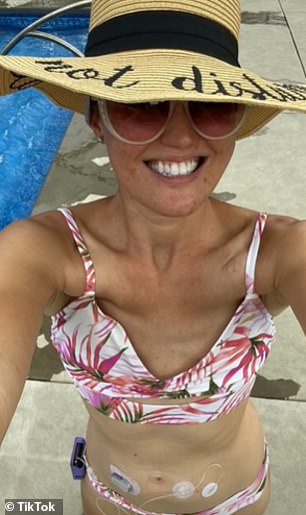 She was first diagnosed with breast cancer in 2017, and she opted to get a double mastectomy and implants during the same surgery (L). She had the implants removed in 2021 (R)

Garlinghouse, who also has Type 1 diabetes, was 35 when she was diagnosed with breast cancer for the first time in 2017.

She made the decision to get implants a few weeks later and underwent a double mastectomy and breast reconstruction during the same surgery.

‘My breast implants looked perfect,’ she recalled in her latest essay for the site. ‘I joked to friends that I would be the hottest old lady at the nursing home one day.’

The mother of four said she suffered from ‘excruciating shoulder pain’ immediately after the surgery, but an MRI was unable to pinpoint the cause.

Garlinghouse was advised to start seeing a physical therapist, which cost her thousands of dollars when combined with chiropractic care. 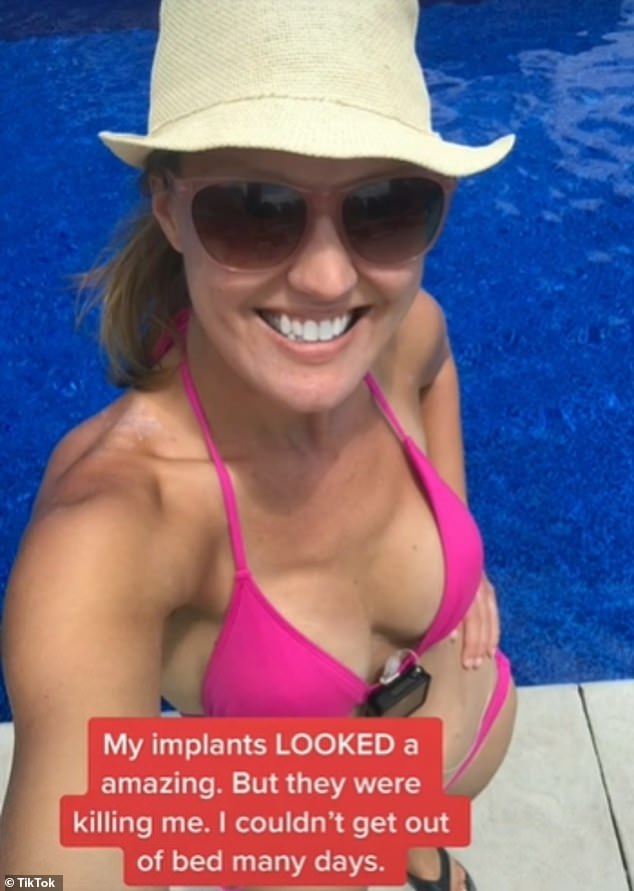 Garlinghouse explained in an essay published by Insider that her ‘breast implants looked perfect,’ but she immediately suffered from shoulder pain 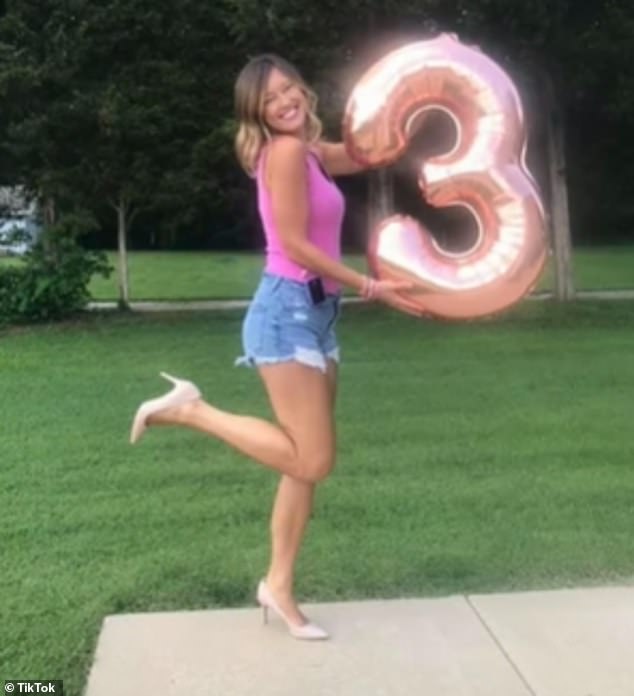 In 2019, she developed a wide range of symptoms, and her ‘health took a sharp decline’ when she entered her third year with breast implants

Two years later, she developed a host of other unexplained symptoms that had her at a loss, including brain fog, joint inflammation, and yellow-tinted skin.

‘Just when I thought I had one handled, another would pop up. I sought the help of 10 — yes, 10 — different medical professionals. They all came up empty-handed, aside from a rheumatologist, who said I had “maybe lupus” based on some questionable lab work,’ she explained.

Garlinghouse said her ‘health took a sharp decline’ when she entered her third year with breast implants.

‘I was experiencing digestive issues, anxiety, depression, insomnia, symptoms of the aforementioned lupus, dizzy spells, muscle aches, purple toes, dry eyes, hair loss, and sudden food intolerances. When I sat down and made a list, I came up with a whopping 29 symptoms,’ she recalled. 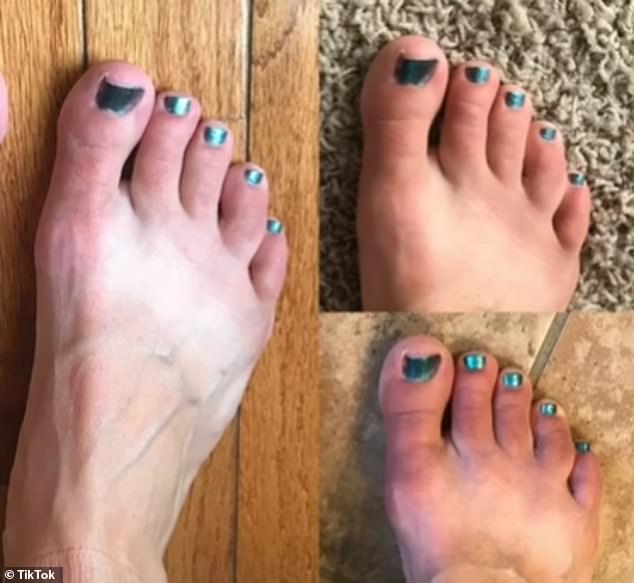 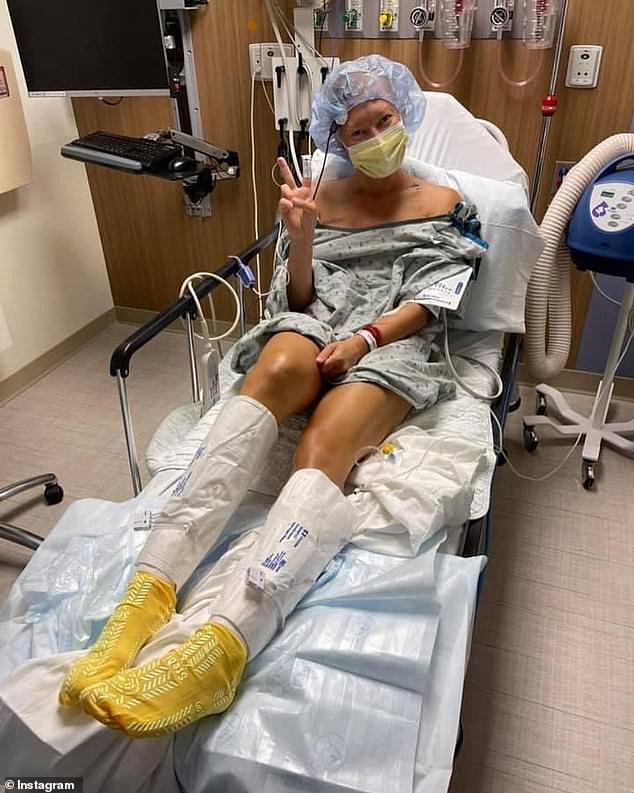 After meeting with ten different doctors who were unable to find out what was wrong with her, she started researching breast implant illness and decided to have her implants removed 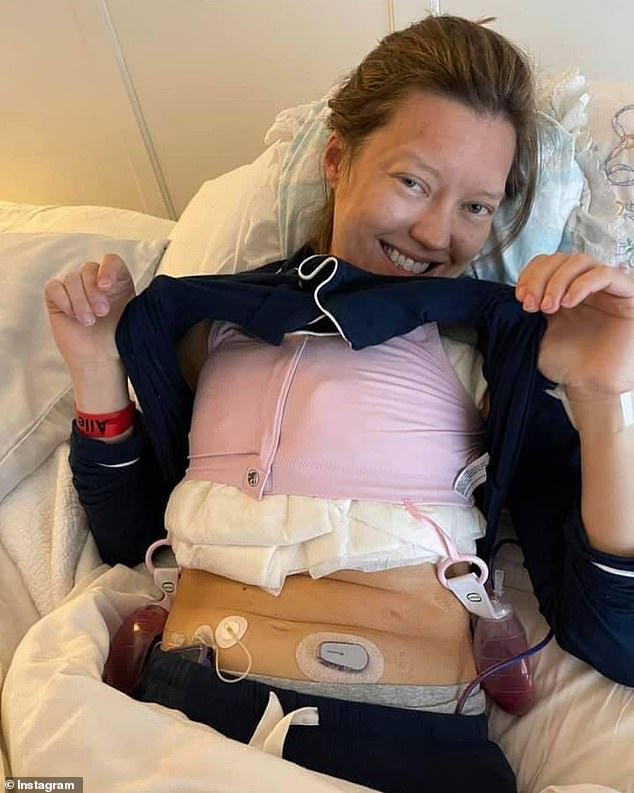 The writer was diagnosed with breast cancer a second time in 2019, and she had both a mass in her chest and her implants removed at the same time

Without any official diagnosis from doctors, she started researching her symptoms online and read other women’s stories about having breast implant illness.

She was convinced removing her implants was the only way she would heal, but she explained that when she spoke with a few medical professionals, she ‘faced medical gaslighting’ from them.

‘They suggested that my illness was all in my head, and asked me things like, “What if you develop depression from being completely flat-chested?”‘ she said.

Garlinghouse noted that the Food and Drug Administration (FDA) issued new safety guidelines for breast implants in October 2021 and included a section on breast implant illness. 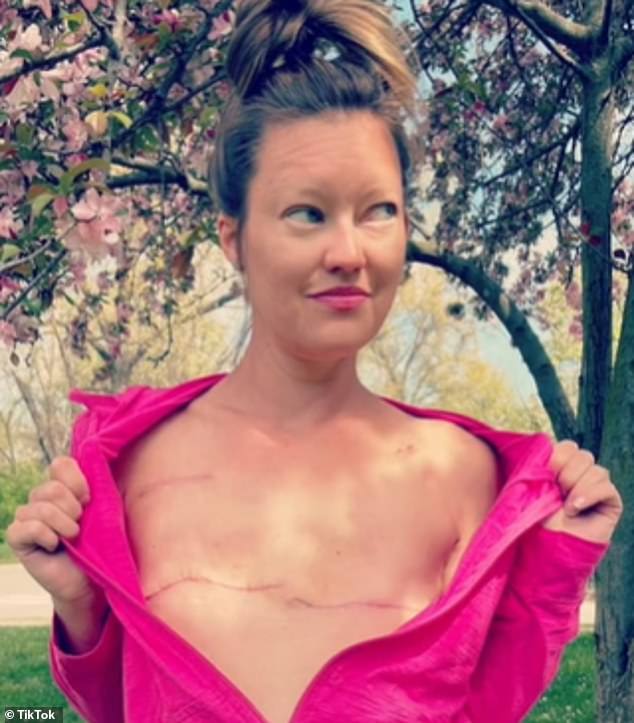 Garlinghouse said that even though she was fighting cancer for a second time, she was ‘giddy’ to no longer have implants 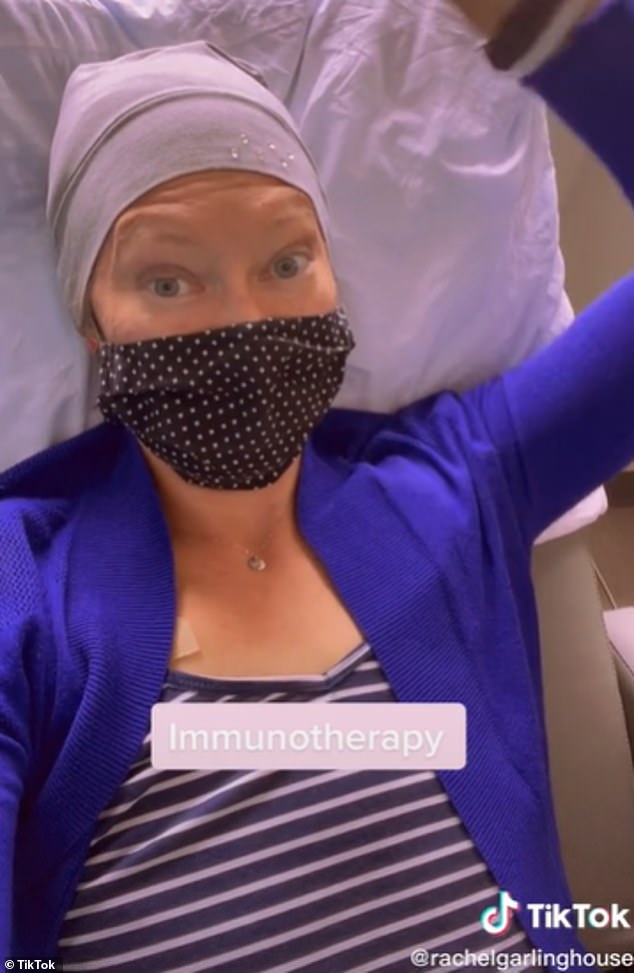 Garlinghouse went on to have 33 rounds of radiation, 12 months of immunotherapy, and 12 rounds of chemotherapy to treat her breast cancer 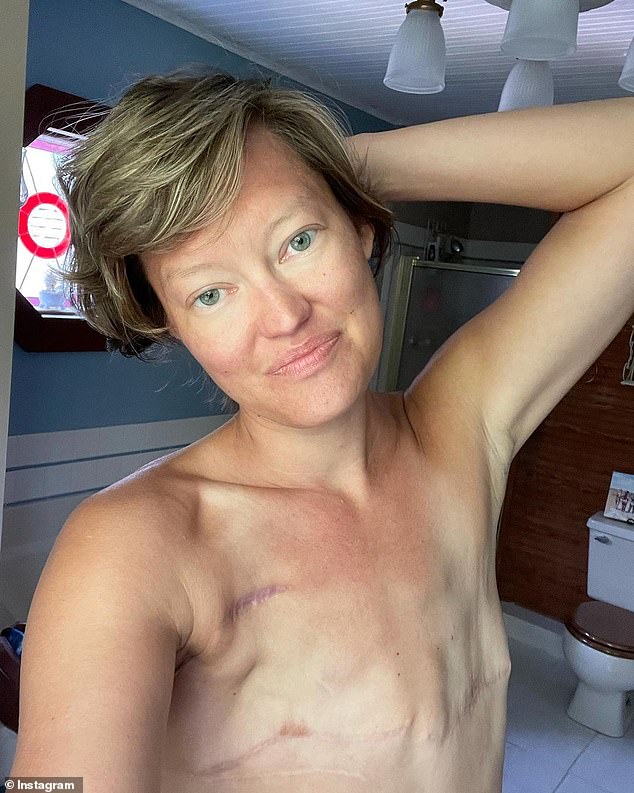 Some of Garlinghouse’s breast implant illness symptoms went away immediately after her explant surgery, while other slowly subsided 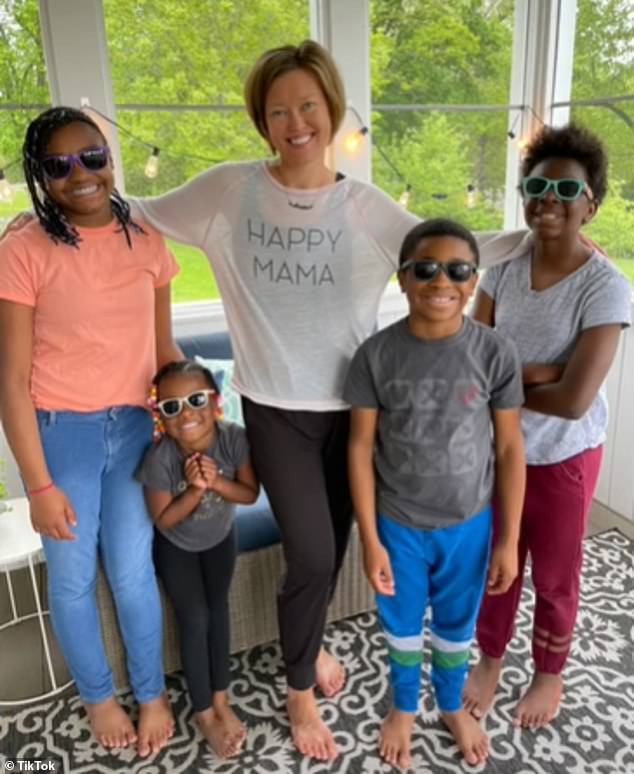 The FDA stated that the ‘removal of the breast implants without replacement is reported to reverse symptoms of breast implant illness.’

The writer was looking to have her implants removed when she was diagnosed with breast cancer for a second time in January 2021, when she was 39.

Garlinghouse’s explant surgery was delayed multiple times due to the pandemic. When she finally had her implants taken out, doctors also removed a 10-millimeter mass from her chest to treat her breast cancer reoccurrence.

She said that even though she was fighting cancer for a second time, she was ‘giddy’ to have her implants removed.

Some of her breast implant illness symptoms went away immediately after the surgery, while others gradually subsided. 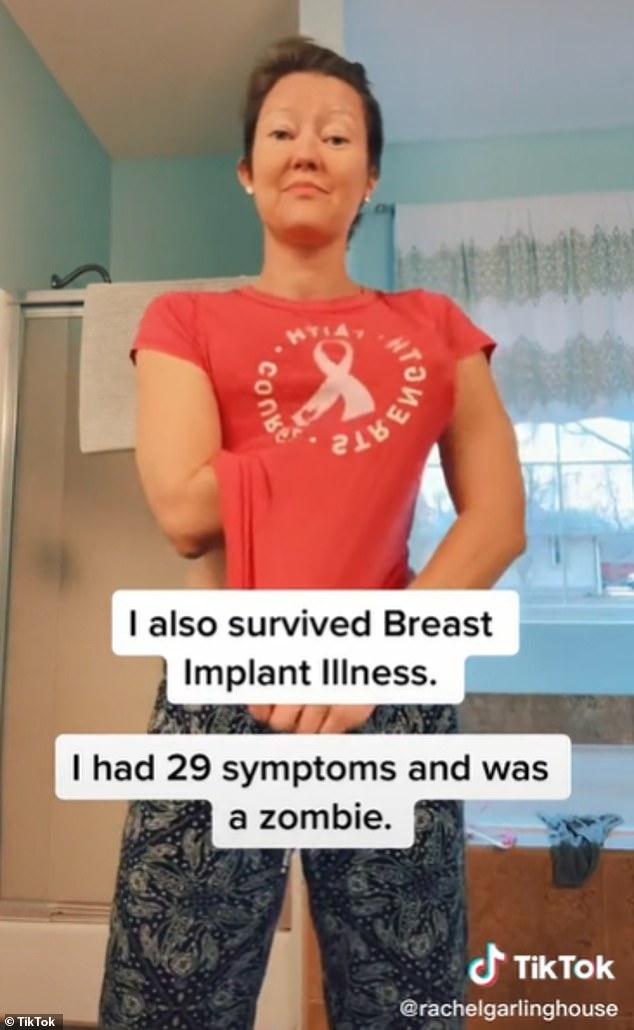 In the midst of her cancer treatments, she joined TikTok and started sharing her story while proudly baring her chest 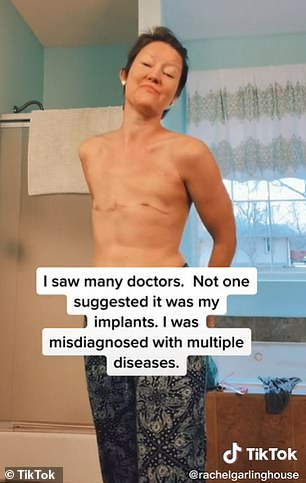 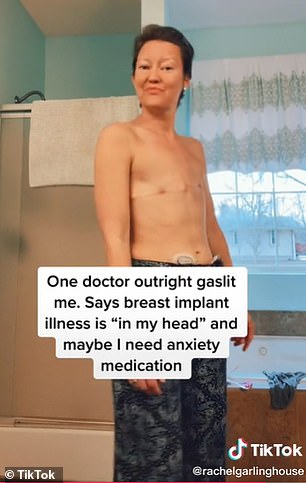 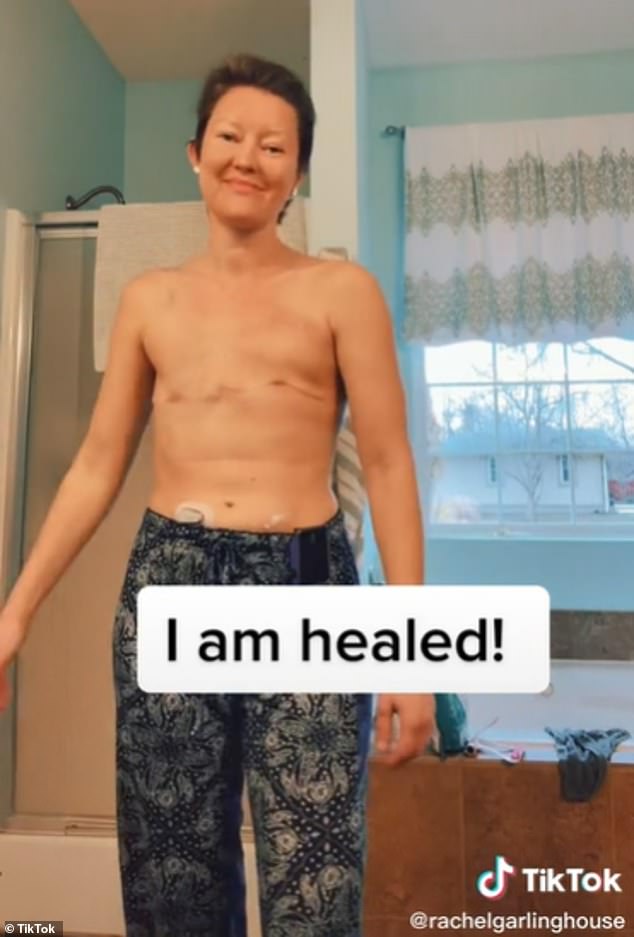 Garlinghouse explained that she has had online trolls accuse her of ‘posting for attention,’ but she has also inspired many women to share their stories and consider removing their implants

Garlinghouse went on to have 33 rounds of radiation, 12 months of immunotherapy, and 12 rounds of chemotherapy to treat her breast cancer.

‘Despite facing a year of cancer treatments, I was healthier than before because I made the bold decision to remove the implants that were making me ill,’ she wrote.

In the midst of her cancer treatments, she joined TikTok and started sharing her story while proudly baring her chest.

She explained that she has had online trolls accuse her of ‘posting for attention,’ but she has also inspired many women to get mammograms and share their own breast implant horror stories with her.

‘The difference between my implanted and explanted self was remarkable,’ she said.